Determining the Quality of Tibetan Thangkas 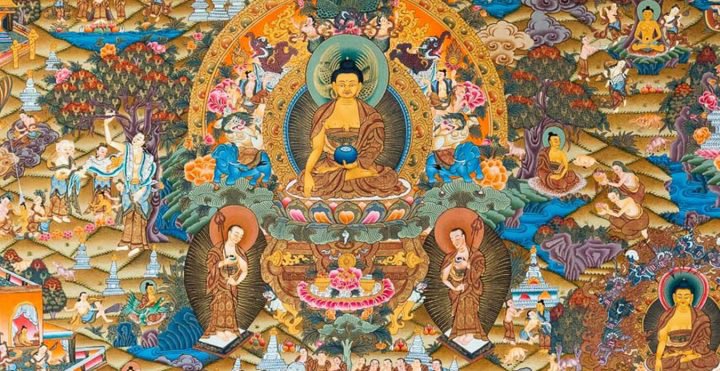 Determining the Quality of Tibetan Thangkas

There are three general skill levels of thangka painters are hobbyist, professionals, and masters.  You can find out  the skill of the artist by looking closely at the lines, such as those used to make waves, clouds, and the faces of people, gods, goddesses, and animals.

The finer and clearer the lines, the greater the skill involved. A thangka painted by a master will cost more than one painted by a professional. The student painted thangkas are the lowest quality, and therefore the cheapest.  In order for you to start recognizing the minor differences between professional and master quality yourself (versus taking the salesman’s word for it), look at a dozen or more thangkas of the same subject.

The Initial Inspections And Examination of The Tibetan Arts

There are several ways inspections and examination need to be done to recognize the fine Tibetan arts. Some of  the simple techniques are described below.

One major fault lies in deviating from the correct proportions when drawing the chin, neck, or the calves of a figure. This indicates that the artist will be forced to leave his locality and will have a negative influence on whatever place he lives in.

Malapportioned ears, noses, or fingers in a drawn figure constitute another major error these points to impairment of one’s personal prosperity and charisma, and the thwarting of any attempt to achieve accomplishments even on a mundane level. Incorrectly built calves, mouths, or cheeks are other flaws in art, leading to one being very unprosperous and unsafe to all kinds of hindering influences and obstacles.

It is likewise a fault to alter the correct proportions in drawing the neck, the chest, and the sides of a figure, since these faults will cause one’s aims to be thwarted and may bring all kinds of harmful and negative influences and to err in drawing the breasts, the nose, or the forehead, which will lead to one having quarrelsome enemies.

If the ears, the lips, or the eyes are out of proportion, this too is a major flaw, leading to the tantric practitioner being immediately unsafe and unsecured to the injuries of the various kinds of hindering forces.

Likewise, if the back support, seat, or canopies are incorrectly drawn too small, the artist’s friends, relatives, and acquaintances will not be affectionate towards him. but will squabble and fight as well, his prosperity will be damaged, his influence and charisma will be damaged, and so forth all kinds of misfortune will come about.

Furthermore, developing such faulty rendition causes one to be reborn an animal in future existences even should one be born a human, one will take birth in a low station, in poor families, without such necessities of life as food. drink, clothing. wealth, crops, bedding, ornaments, and so on. Similarly, one will be born with one’s body deformed in the same way.

Wherever the fault lay on the upper or lower part of the figure – lame, blind, deaf, with malformed limbs, hunch backed, with blotchy complexion, with imperfect organs and faculties, with extra fingers and toes, with a dull complexion and so forth.

One will be born as a defective individual. If one depicts the backrest, seat, and canopy as zoo small, one will be reborn in a hot country, or where there is much danger from the elements in an environment without protection from oppression by rulers, threats from wild animals, stinging and biting insects, and continual harassment by vagabonds and evil spirits. These and many other sorts of dangers are described in the traditional literature.

Characteristics of the Image

The hands and feet are youthful and supple, marked with the design of a wheel (dharmacakra) on the palms and soles. The fingers and toes are slightly ‘webbed’ with the membranes of skin between them the fingers should be long and tapering. The thumbs and large toes are marked with the design of the endless knot. The veins and anklebones are not visible, and the limbs taper smoothly.

On such an asexual form as the Buddha’s, the male genital organ is retracted. The belly is wide, the navel deeply indented and twisting clockwise, and the waist well-defined and symmetrical.

The upper body should be broad, with rounded shoulders. The throat is tapered like a conch shell. The lips are clearly defined, and red like a bimba fruit. The nose should be long, with the tip pointed. The eyes are long like the petals of a lotus, with the whites and pupils clearly defined the eyebrows are to be thick and long and distinct, not joining in the middle of the forehead. Between the eyebrows is the urna, a fine white hair coiling to the right.

The upper curve of the ears is high the lobes are long, and the orifice lobed and wide. The forehead is to be very broad with a well-defined hairline, while the head is to be large and rounded. The hairs of the head are thick and clearly separated, including those of the cranial protuberance (usnisa), which resembles a pile of grain in shape.

Generally, the form is meant to be large and erect, with dignified bearing and pleasing mien, the joints of the limps well-placed, and the whole form balanced and well- proportioned. The particularly masculine or feminine features should be clearly defined, and the fit of the clothing graceful.

In summary, of those major and minor marks of physical perfection which are set forth in such texts as the Abhisamayalangkara, one must reproduce those which are capable of being depicted, in the accepted traditional manner the result will be a figure which will appeal to anyone which will interest any viewer, and which is beautiful and aesthetic to behold.

Since the sutras and tantras set forth these traditions as being so infinitely worthy and beneficial, rigorous adherence to the standards of correct proportion and detail is of inestimable benefit to the Buddhist tradition and to other beings. One must make every effort not to be negligent. 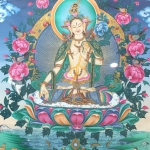 White Tara is peaceful deity sitting in vajra posture above a moon disc and lotus seat she is surrounded by a nimbus of various colored rings and with pink lotus blossoms.
Buy Beautiful White Tara Thangka Online