Mahakala looks wrathful and is bedecked with serpents. He wears a garland of severed heads and a crown of five skulls, which represents five poisons of delusions namely lust, hatred, ignorance, pride and jealousy transformed into the wisdom of

Mahakala looks wrathful and is bedecked with serpents. He wears a garland of severed heads and a crown of five skulls, which represents five poisons of delusions namely lust, hatred, ignorance, pride and jealousy transformed into the wisdom of five Buddhas.

He also wears a tiger skin symbolizing the purification of desires. He has three eyes symbolizing his clear comprehension of Three times. He looks ferocious against a background of blazing fire.

His two feet symbolize wisdom and method. His ferocious appearance aside, Mahakala is a manifestation of Avalokiteshvara, the embodiment of universal compassion.

Be the first to review “Four Armed Mahakala” Cancel reply

4 Armed Mahakala is a dharmapala predicted by the Buddha. Four-Armed Mahakala is a particular protector of the madhyamaka teachings and of the Chakrasamvara tantra. He was also a special protector of Surmang. His symbolism is based on vajra anger and compassion. As described in The Myth of Freedom, his four arms represent the four karmas: One left arm holds a skull cup of amrita, the intoxicating nectar of the gods, which is a means of pacifying. One right arm holds a hooked knife, a symbol of enriching. The second right arm holds a sword, which is a way of magnetizing or gathering together energies. The sword need not strike; just by its being waved, the energies are rallied. The remaining left arm holds the trident which destroys or subdues. Its three prongs cut through the root kleshas of passion, aggression, and ignorance with one thrust.

19
Aug
2019
Art, Himalayan Art sadiksha
This 18th-century essay drawing is similar in content to the photographic measurements. The so-called “image measurement” is the scale of the Buddha’s human body and the scale of the figure. This may be a reference guide for the painting of Buddha statues in Tibet or Nepal in the 18th century. It contains 36 detailed drawings and the text is in Tibetan. The representation of the Buddhist figure is not fabricated out of thin air. .
Read More

26
Dec
2018
Buddhism, Culture, Deities, Symbols kamalthakur
Avalokitesvara, the Lord of Compassion, gazes out across the world, his white radiance soothing the sufferings of living beings. With one pair of hands, he clasps to his heart the wish-fulfilling gem of his vow to eradicate the world’s pain. In his upper left hand, he holds the lotus of spiritual receptivity, the desire to leave the mud of samsara and reach up toward the sun of true happiness. Above his head, we sense .
Read More 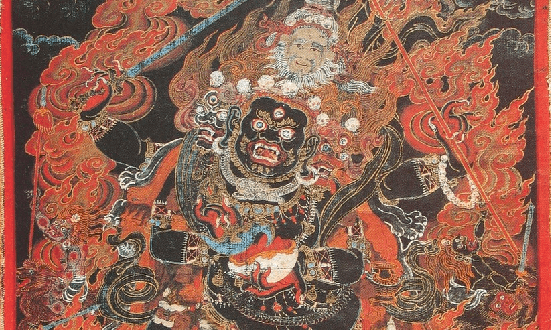