Set Om Mantra Mandalas is a set of Meditation Mandalas With Mantras. These sets are handpainted by the artist of  Old Monastery Thangka Painting School.

Om Mantra Mandalas assortment is a set of Meditation Mandalas With Mantras. These sets are handpainted by the artist of  Old Monastery Thangka Painting School.

Each mandala has OM in its center.

Properties of the Mandalas in the set

In the set of Om mantra mandalas, each mandala has different size. The size of all the mandalas are listed below:

These mandalas are in stock of our gallery so we offer you a discounted price.

Mandala is a circle which is a device for the Tantric meditation. It is a visual aid for concentration and introversive meditation leading to the attainment of insights and to activation of forces culminating in “Siddhi” supernatural forces.

The Mandala is the graphic representation of this process. It is not only theoretical but practical also as an operational scheme involving a clear plan for the practical realization of the process within oneself. It thus becomes an instrument (Yantra). In the center of the mandala, we can see Om, which represents perfectness. The mantra is repeated 14 times in the outer ring of the mandala. The black background and the golden mantra is a perfect color combination which helps the mandala to be perfect. This set of the mandala is perfect for meditation and you can gift to your nearest and dearest one.

The size of Om Mantra Mandala with a black background and golden mantra is 30*30 cm. 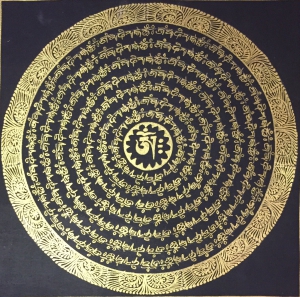 The beautiful OM Mantra Mandala has om in the center and the mantra is repeated 7 times in the outer ring of the mandala. The design of this mandala is slightly different from the first one. 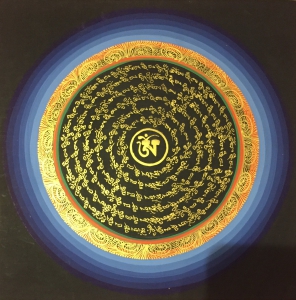 Om is in the center and the mantras are repeated 6 times in an outer ring. The black background and blue shades make mandala perfect. The mantras are written in golden color. 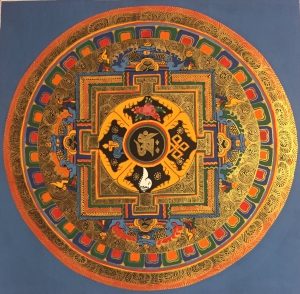 In this mandalas, the om is seen surrounded by geometric patterns.  There are auspicious symbols in the first circle of the mandala. The mandala follows the Geometric pattern and its typical meaning as a step towards greater consciousness and divine connection.

The size of Om Mantra Mandala with Geometric Pattern is 30*30 cm.

The uses of Om Mantra Mandala are listed below:

Meaning of OM in Buddhism

OM is especially true with Tibetan Buddhism, which was greatly influenced by Hinduism.

The Om symbol is often placed at the beginning or end of Buddhist mantras and texts. One of the most commonly known mantras is Om Mani Padme Hum, the mantra of compassion. Many people interpret this mantra as the “totality of sound, existence, and consciousness.”

Other meanings that the om has come to represent include:

During the 14th century, the Dalai Lama described Om as consisting of 3 separate letters, these being A, U, and M.

There are various symbolizations associated with these 3 letters including the “pure exalted body, speech, and mind of the enlightened Buddha.

The Om also symbolizes “wholeness, perfection, and the infinite.” On many statues and Eastern Asian monuments, the Buddhist Om is featured by a pair of fierce guardian kings, one which pronounces the A part while the other pronounces the UM. Together, these kings are considered to be saying “the absolute.” 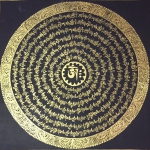 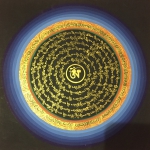 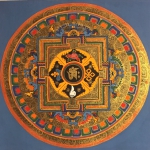 Om is spoken of as the primordial sound, the sound of sounds. The sound that is within both silence and noise.

How to Meditate on OM Mantra Mandalas

Place your Om Mantra mandala on a table or on the floor at 75cm length in front of you or improvised easel, level with your eye-line, sit comfortably either on a chair with your feet flat on the floor or on a cushion with your legs crossed.