This beautiful Amoghasiddhi Buddha mandala with 5 Dhyani Buddhas is hand painted by the Master Artist from Bhaktapur.

This beautiful Amoghasiddhi Buddha mandala with 5 Dhyani Buddhas is hand painted by the Master Artist from Bhaktapur.

In the center of the mandala we can see Amoghasiddhi Buddha who is sitting in the Abhaya Mudra. This mudra symbolizes peace, protection and harmony. His green colour is symbol of happines and peace. He is also known as the Laughing Buddha. 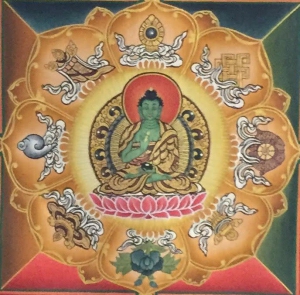 8 Auspicious symbols and their meaning in the Mandala

In the second layer there are four protector in 4 corner of the mandala. These Protectors will remove obstacles and gather all favorable conditions for their spiritual practice.

In the top most corner there are 3 Buddhas Ratnasambhava, Amitabha Buddha and Amoghasiddhi Buddha. 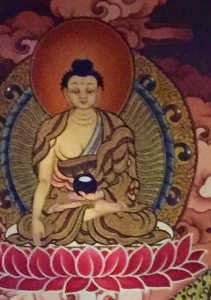 Ratnasambhava is associated with generosity.

He is sitting on a lotus platform upon a singhashan. He is yellow in colour which means “yellow Born”. He is seen in Dana mudra.

He is also associated with the Tantric rite of increase, and with prosperity generally. 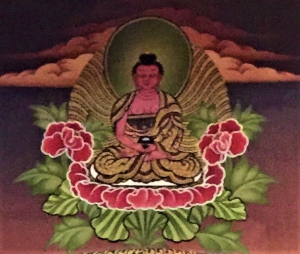 Amitabha Buddha, who is also called Amita or Amida Buddha, is probably the best known of the Dhyani Buddhas.

In particular, devotion to Amitabha is at the center of Pure Land Buddhism, one of the largest schools of Mahayana Buddhism in Asia.

In a long-ago time, Amitabha was a king who renounced his kingdom to become a monk. Called Dharmakara Bodhisattva, the monk practiced diligently for five eons and realized enlightenment and became a Buddha.

He is usually depicted as a bhiksu with his hands in the dhyana mudra. He is deep red in colour.

The mantra of Amitabha Buddha is Om Amideva Hrih. 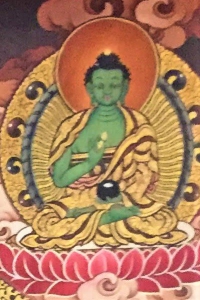 Amoghasiddhi is associated with the conceptual mind. His action towards the promotion of Buddhist paths is the pacification of evils.

This is symbolised by Amoghasiddhi’s symbol, the moon. He gestures in the mudra of fearlessness, symbolising his and his devotees’ fearlessness towards the poisons or delusions.

In the buttom of mandala we can see medicine Aksobhya Buddha and Vairocana Buddha.

Akshobhya is blue in color. He is seen as touching the earth with his right hand. This is the earth touching mudra, which is the gesture used by the historical Buddha when he asked the earth to bear witness to his enlightenment.

In his left hand, Akshobhya holds a vajra, the symbol of shunyata an absolute reality that is all things and beings, unmanifested. Akshobhya is also associated with the fifth skandha, consciousness.

The mantra of Aksobhya is Om Aksobhya Hum.

Vairocana Buddha in the Mandala

Vairocana Buddha is white in color who is also called Primordial Buddha or Supreme Buddha. The white color represents all colors of light and all the Buddhas.

Dharma wheel is his symbol which, at its most basic, represents the study of the dharma, practice through meditation, and moral discipline. He is seen in Dharmachakra mudra . The mudra represents the turning of the wheel and places the hands so that the thumbs and index fingers touch at the tips to form a wheel.

He is thought to be the embodiment of all the Dhyani Buddhas also everything and everywhere, omnipresent and omniscient.

He represents the wisdom of shunyata, or emptiness. Vairocana is considered a personification of the dharmakaya everything, unmanifested, free of characteristics and distinctions.

He is associated with the first skandha, form. Meditation on Vairocana vanquishes ignorance and delusion, leading to wisdom.

The mantra of Vairocana Buddha is Om Vairocana Hum

according to Mark Unno the mantra is translated as

Praise be to the flawless, all-pervasive illumination of the great mudra. Turn over to me the jewel, lotus, and radiant light.

According to John Stevens the mantra is trenslated as

Infallible brilliance of the great mudra! Creating the radiance of the Jewel and the Lotus.

There are various forms of mandalas with distinct concepts and different purposes. The individual representations range from the Buddha Mandalas, which transmit the ancient knowledge of the development of the universe and the world-systems which represents a high point among Mandalas dedicated to meditation; to the Mandalas of the Medicine Buddha which demonstrates how the Buddha-power radiates in all directions, portraying the healing power of the Buddha.

29
Nov
2018
Buddhism, Mandala sadiksha
Buddha Mandalas painting is a religious piece of art. In the Buddhist and Hindu traditions, sacred art often takes as a mandala form. In Sanskrit, mandala or circle is known as a spiritual and ritual symbol in Hinduism and Buddhism, that represents the universe. Mandala is taken as sacred space and also as an abode of fully realized beings or deities. Buddha Mandala with 5 Dhayni Buddhas This painting shows the life of Buddha. Buddha mandala is .
Read More

20
Apr
2020
Art, Himalayan Art, Thangka Samiksha
Samantabhadra is known as Universal Worthy is a Bodhisattva in Mahayana Buddhism associated with Buddhist practice and meditation. Samantabhadra is most commonly described as a bodhisattva himself, although some Vajrayana Buddhist traditions, namely the Nyingmapa, regard him as a primordial Buddha in indivisible Yab-yum union with his consort Samantabhadri. The Life of Samantabaadra Buddha In this section, we are going to learn about the life of Samantabhadra Buddha. After that, we will learn the .
Read More 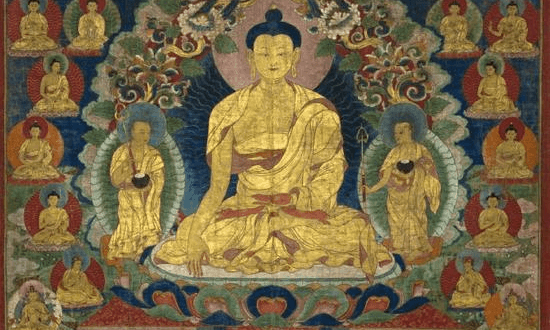