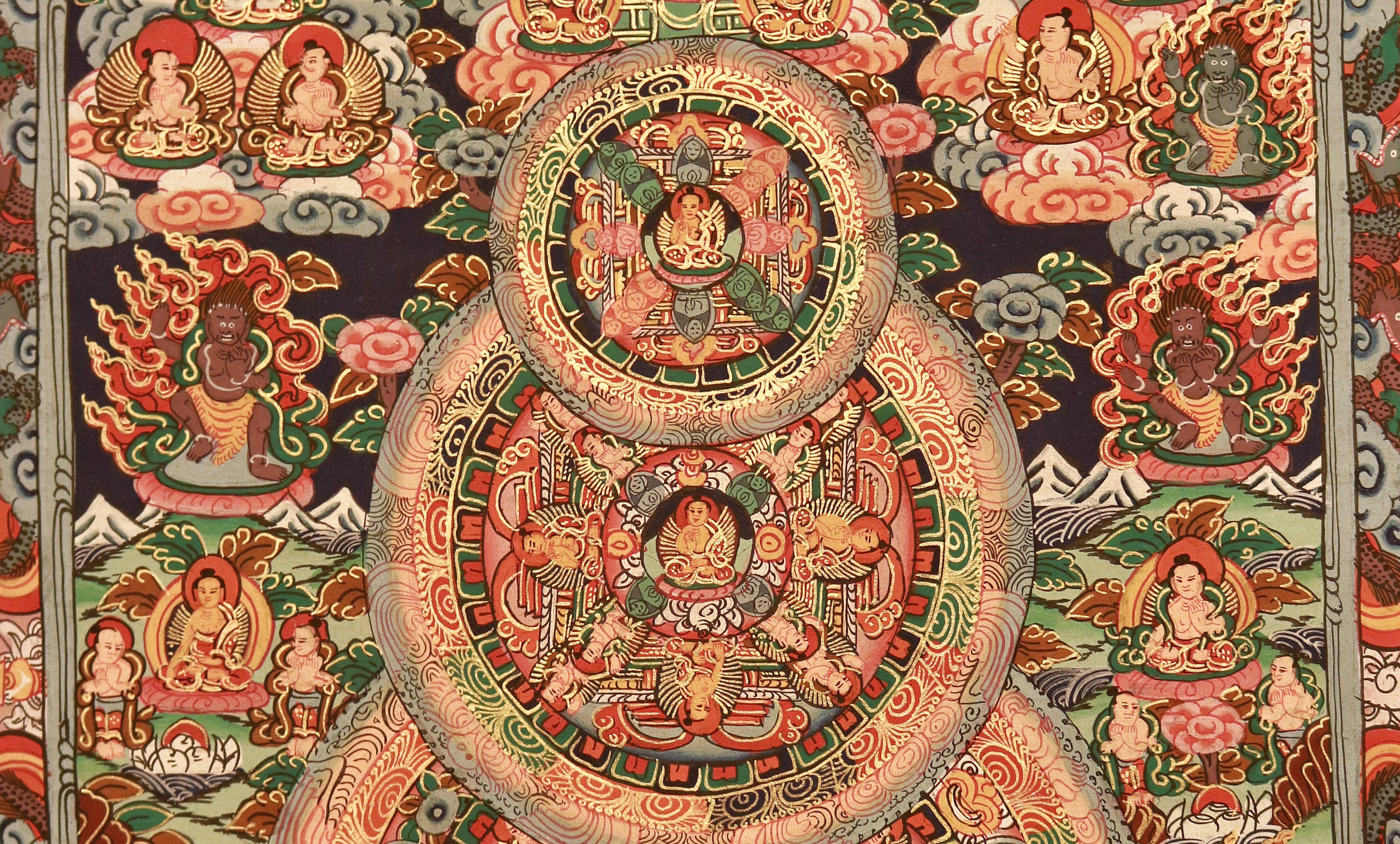 Buddha Mandalas painting is a religious piece of art. In the Buddhist and Hindu traditions, sacred art often takes as a mandala form.

In Sanskrit, mandala or circle is known as a spiritual and ritual symbol in Hinduism and Buddhism, that represents the universe.

Mandala is taken as sacred space and also as an abode of fully realized beings or deities.

This painting shows the life of Buddha. Buddha mandala is an art either made out of sand or a painting. It is used as a visual aid for concentration and healing purposes. It is used in meditation halls too. In the painting, there are many smaller circles inside a big circle. In the radial lines of the circle, we can see tiny pictures of Buddha. Above all, the painting tries to reveal the Buddha in different forms.

Five Dhyani Buddha mandala are known as the five Tathagata: transcendent beings manifestations of the five virtues of the primordial Buddha Vairocana positioned here at the center of the Mandala.

The other Dhyani Buddhas are Amoghasiddhi, Amitabha, Akshobhya and Ratnasambhava.

This mandala is also called five circles mandala and it is designed to facilitate meditation. Each circle surrounding the Buddhas is the symbol of protection from external interferences. The ring of lotus petals inside the circle symbolizes purity and spiritual intention that is necessary to practice meditation. Inside the lotus ring, it is depicted as a circle of flames, representation of the fire of knowledge that destroys ignorance and enables the practitioner to enter the mandala. 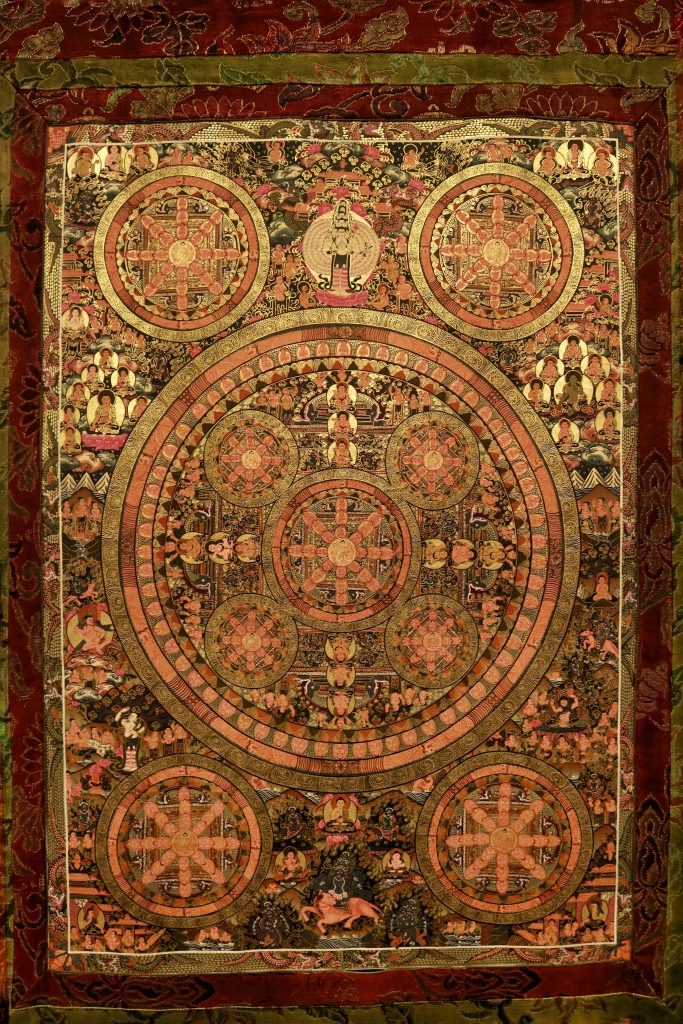 Nirvana is the earliest and most common term used to describe the goal of the Buddhist path. The literal meaning is “blowing out” or “quenching”.

It is the ultimate spiritual goal in Buddhism and marks the soteriological release from rebirths in samsara.

Nirvana is part of the Third Truth on “cessation of dukkha” in the Four Noble Truths, and the summum bonum destination of the Noble Eightfold Path. 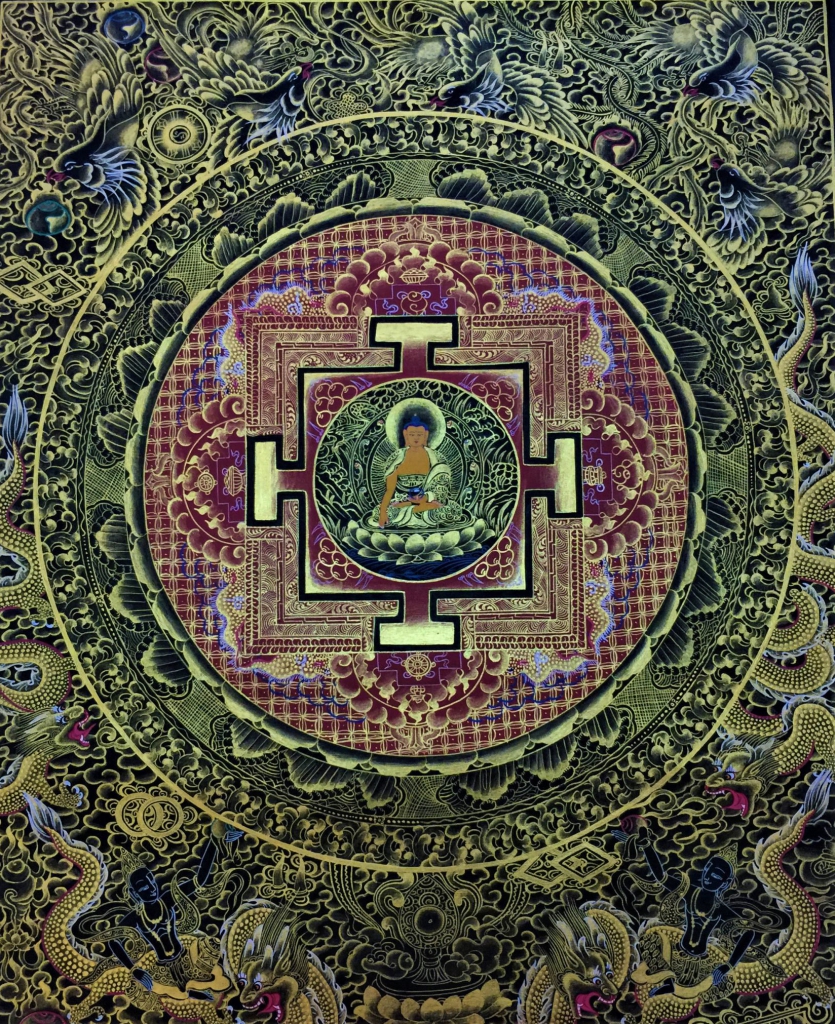 The Shakyamuni Buddha is at the heart of the mandala surrounded by Eighteen Arhats. There are two standing Arhats on each side of him and 16 surround him sitting on the pink lotus petals. Additionally, on the outside of the square, the four guardian kings guard the four cardinal directions. And outermost part of the mandala is surrounded by medicine buddha, mahakala and other buddhist deities.

This sacred land inside the circle is pure and kept separate from the vicissitudes of samsara. As a result, devotees can only enter the diagram through spiritual realization. In the midst of the Buddha, land Shakyamuni sits in full lotus pose expressing Bhumisparsha mudra.

Therefore, his right hand is stretched over his right leg and it is lightly touching the ground. As such, Shakyamuni calls the earth goddess to witness his vanquishment of the demon Mara. Therefore, we can assume this Shakyamuni Buddha Mandala Thangka painting depicts the origin of Buddhism in our time.

Additionally, Shakyamuni Buddha holds the meditational alms bowl in the palm of his left hand. Inside the bowl are the three nectars for personal salvation. These three nectars annihilate the three poisons – hatred, greed, and ignorance. 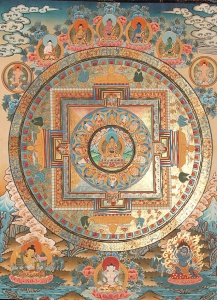 In the center of the mandala, we can see Shakyamuni Buddha seating on the lotus. He is protected by the outer ring of fire. Buddha is surrounded by 5 Buddhist deities. They are White Tara, Manjushri, Green Tara, Mahakala ad Amitabha Buddha

The mandala is a series of circles each representing the obstacles and illusions that we must pass beyond for spiritual growth. This circle of rainbow fire symbolizes both knowledge and purification.

The multi-dimensional expansiveness of the mandala is conducive to meditation, establishing a sacred space within, so to achieving a relaxed state of focussed inner silence. A popular method of mandala meditation is to visualize oneself as the central deity with all their associated qualities, transferring ones spiritual consciousness into the heart of the mandala. 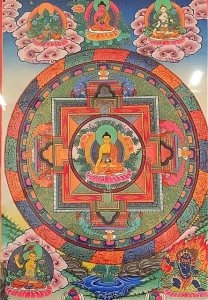 This mandala is the representation of Shakyamuni Buddha group of compassionate deities, known as the three long-life deities – Amitabha, The Buddha of Unconditional Love is in the center with White Tara to the left and Namgyalma to the right.

The Five Dhyani Buddhas are the symbol of purity, an abstract understanding of the power of Buddhist teaching to achieve enlightenment by recognizing then moving beyond negative human flaws which are illusions of ignorance and an unfocused mind. They mostly represented in Vajrayana mandalas used for meditation practice.

They are known as the five Tathagata. The other Dhyani Buddhas are Amoghasiddhi, Amitabha, Akshobhya and Ratnasambhava.

This mandala is also called five circles mandala and it is designed to facilitate meditation. Each circle surrounding the Buddhas is the symbol of protection from external interferences. The ring of lotus petals inside the circle symbolizes purity and spiritual intention that is necessary to practice meditation.

The Shakyamuni Buddha is at the heart of the mandala as it rises majestically from the lotus blossoms in the Himalayan lake scene to shimmer radiantly against the bright blue sky behind.

Inside the mandala beyond the ring of fire and through the protected gates decorated with auspicious symbols, we enter the ‘abode of the gods’, here The Buddha resides in peaceful meditation with his two principal disciples, Shariputra and Maudgalyayana, at this side. 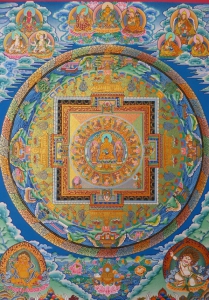 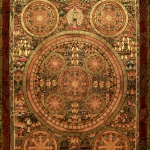 This painting shows the life of Buddha. Buddha mandala is an art either made out of sand or a painting. It is used as a visual aid for concentration and healing purposes. It is used in meditation halls too.
Buy Buddha Mandala Online