Depicting the Painting of Shakyamuni with Geluk Masters 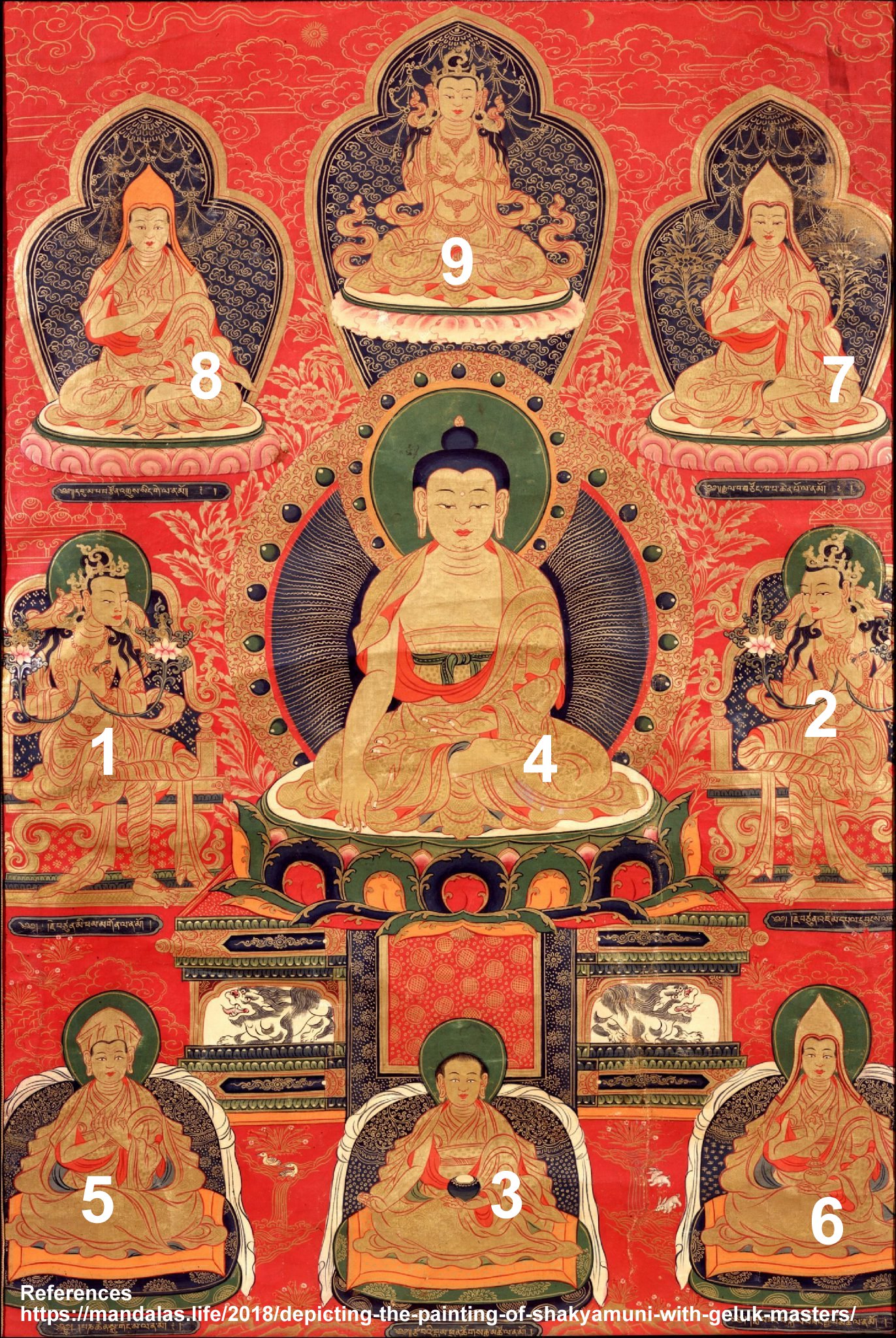 Maitreya is regarded as a future Buddha of this world in Buddhist eschatology. In some Buddhist literature, such as the Amitabha Sutra and the Lotus Sutra, he is referred to as Ajita.

According to Buddhist tradition, Maitreya is a bodhisattva who will appear on Earth in the future, achieve complete enlightenment, and teach the pure dharma.

According to scriptures, Maitreya will be a successor to the present Buddha, Gautama Buddha.

The prophecy of the arrival of Maitreya refers to a time in the future when the dharma will have been forgotten by most on the terrestrial world.

Maitreya has also been adopted for his millenarian role by many non-Buddhist religions in the past, such as the White Lotus, as well as by modern new religious movements, such as Yiguandao.

Manjusri is a bodhisattva associated with prajna in Mahayana Buddhism.

In Tibetan Buddhism, he is also a yidam. His name means “Gentle Glory”. He is also known by the fuller name of Manjusrikumarabhuta literally “Maanjusri, Still a Youth” or, less literally, “Prince Manjusri”.

Yeshe Puntsok Gyatso Bangowa’s nephew was the reincarnation of Gyagar Tashi and lived at the holy site of Drodung in Dege.

He founded a monastery there at which he instituted the study and practice of the Kama and Terma.

Also known as Gautama Buddha. The founder of Buddhism. “Shakyamuni” means “sage of the Shakyas,” Shakya being the name of the tribe or clan to which his family belonged.

Opinions differ concerning the dates of his birth and death. According to Buddhist tradition in China and Japan, he was born on the eighth day of the fourth month of 1029 B.C.E. and died on the fifteenth day of the second month of 949 B.C.E., but recent studies have him living nearly five hundred years later.

He was the son of Shuddhodana, the king of the Shakyas, a small tribe whose kingdom was located in the foothills of the Himalayas south of what is now central Nepal.

Shakyamuni’s family name was Gautama (Best Cow), and his childhood or given name was Siddhartha (Goal Achieved), though some scholars say the latter is a title bestowed on him by later Buddhists in honor of the enlightenment he attained.

According to the Buddhist scriptures, Shakyamuni was born in Lumbini Gardens, in what is now Rummindei in southern Nepal.

His mother, Maya, died on the seventh day after his birth, and he was raised thereafter by her younger sister Mahaprajapati.

In his boyhood and adolescence, he is said to have excelled in both learning and the martial arts.

Though raised amid the luxuries of the royal palace, he seems to have very soon become aware of and been profoundly troubled by the problem of human suffering.

As a young man, he married the beautiful Yashodhara, who bore him a son, Rahula. He became increasingly possessed, however, by a longing to abandon the secular world and go out in search of a solution to the inherent sufferings of life.

Buddhist scriptures describe four encounters, which served to awaken in him an awareness of these four sufferings common to all people—birth, aging, sickness, and death—and a desire to seek their solution.

Eventually, he renounced his princely status and embarked on the life of a religious mendicant.

Lobsang Yeshe was the fifth Panchen Lama of Tibet.

He was born of a well-known and noble family in the province of Tsang.

He was soon recognized as the true incarnation of Lobsang Chokyi Gyaltsen, the Fourth Panchen Lama of Tibet, and was installed with great ceremony at Tashilhunpo Monastery.

Kelzang Gyatso was born in Lithang of Eastern Tibet, in the present-day Garze Tibetan Autonomous Prefecture of present-day Sichuan province.

At that time, the Dalai Lama’s throne in Lhasa was occupied by Ngawang Yeshey Gyatso, who had been installed by Lha-bzang Khan as “the real 6th Dalai Lama” in place of Tsangyang Gyatso.

Je Tsongkhapa Lobzang Drakpa was born in the Tsongkha region of Amdo in 1357.

His mother was Shingza Acho and his father was Lubum Ge. Among the numerous miraculous incidents and omens believed to have taken place surrounding his birth, perhaps the most famous is that of a drop of blood from Tsongkhapa umbilical cord that is said to have fallen on to the ground, giving rise to a sandalwood tree.

Whose leaves bore symbols related to the Simhanada manifestation of the bodhisattva Manjusri, a deity with whom Tsongkhapa would later be identified.

His mother later built a stupa on this spot and over time further structures and temples were added.

Today the location of Tsongkhapa’s birth is marked by Kumbum Monastery, founded in 1583 by the Third Dalai Lama Sonam Gyatso on the spot of the original stupa.

Umapa, also known as Tsondru Sengge or, by his tantric name, Pawo Dorje, was born in Markham region of eastern Tibet in the mid-fourteenth century. Barring his few years in central Tibet, which were recorded sporadically in biographical accounts of other Tibetan masters, most of his activities were carried out in and around the region of Markham.

Vajradhara (Sanskrit: वज्रधर. Also, the name of Indra, because ‘Vajra’ means diamond, as well as the thunderbolt, anything hard more generally) Tibetan: རྡོ་རྗེ་འཆང།  is the ultimate primordial Buddha, or Adi Buddha, according to the Sakya, Gelug and Kagyu schools of Tibetan Buddhism.