Sitatapatra – Goddess of the White Parasol 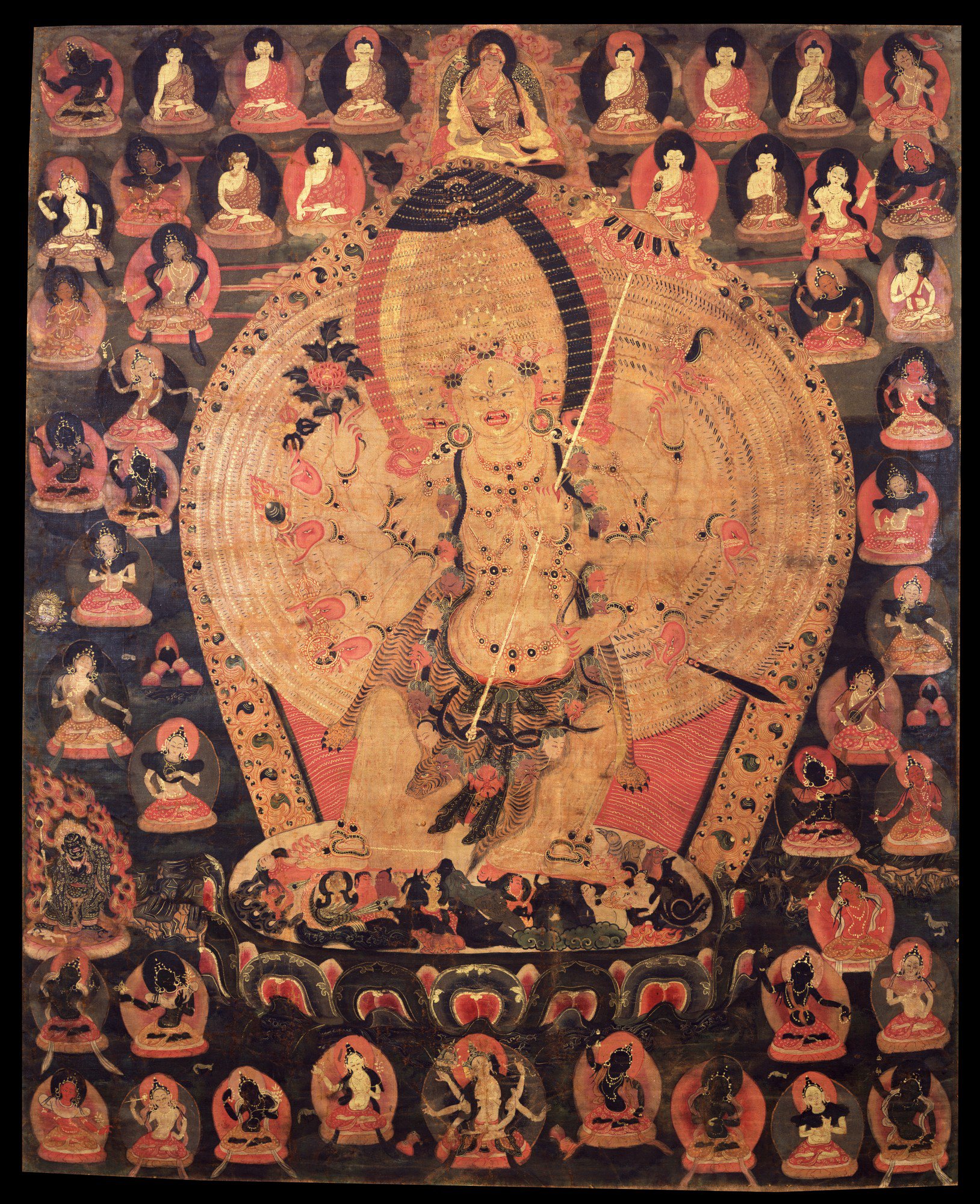 Sitatapatra – Goddess of the White Parasol

Sitatapatra is known as a protector against supernatural danger in Buddhism. She is venerated in both the Mahayana and Vajrayana traditions. She is also known as Usnisa Sitatapatra.

Sitatapatra is a powerful independent deity emanated by Gautama Buddha from his Usnisa.

Sitatapatra is white in color with 1000 faces, 1000 hands, 1000 legs, and 10,100,000 (ten million one hundred thousand) eyes. The main face in front is white which is showing a fierce expression with a wide gaping mouth and a further 199 white faces above. To the left is a vertical row of yellow faces and to the right is a vertical row of green faces.

On both sides of Sitatapatra, there are red faces and on top appearing as a cap are 200 blue faces. Each face of Sitatapatra has three eyes and glares with a fierce expression. In the first pair of hands, the right extended downward and holds a Dharma Wheel. And the left hands of Sitatapatra holds an arrow together with the gold handle of a parasol.

She is adorned with various jewel ornaments, a necklace of fifty freshly severed heads each in a different color and expression, and a long snake necklace. As a lower garment, she wears a fresh tiger skin skirt fastened with a belt of green silk. A further 99 pairs of hands hold in the right a Dharma Wheel and an arrow in the left.

The 500 legs of Sitatapatra on the left side are extended above worldly deities and a host of animals.  And the legs of Sitatapatra on the right are bent and press down on all worldly troubles, daemons, and animals. She is Standing above a sun disc and multi-colored lotus seat she is completely surrounded by the flames of pristine awareness, richly stylized, and containing numerous wish-fulfilling jewels.

I salute you, exalted one!
Only mother of all Buddhas, past, present, and future,
Your glory pervades the three worlds.
Homage to you, savioress from the evil influence of demons
and planets,
From untimely death and evil dreams,
From the dangers of poison, arms, fire, and water.
The mandala of your being is exceedingly vast.
You have a thousand heads full of innumerable mindstates,
A thousand hands holding flaming attributes.
Queen of all the mandalas of the three worlds
Ever-present in the work of taming evil ones,
I salute you, goddess of magical spells, turning demons into dust!

Mahakala is on the left side of the thangka. Mahakala is known as the black wrathful deity. Mahakala has one face and two hands holding a stick and skullcap.

Mahakala is wearing long garments. Mahakala is standing on a corpse and lotus seat.  The 10 buddhas, Mahakala and the 35 goddesses form the mandala retinue of Sitatapatra.

Three Mahakala Brothers are supported in the bend of the elbow is a sandalwood staff vertically standing. They wear bone ornaments, long linen garments of various colors.  On either side of the central Mahakala, two couples kneel in a gesture of petitioning.