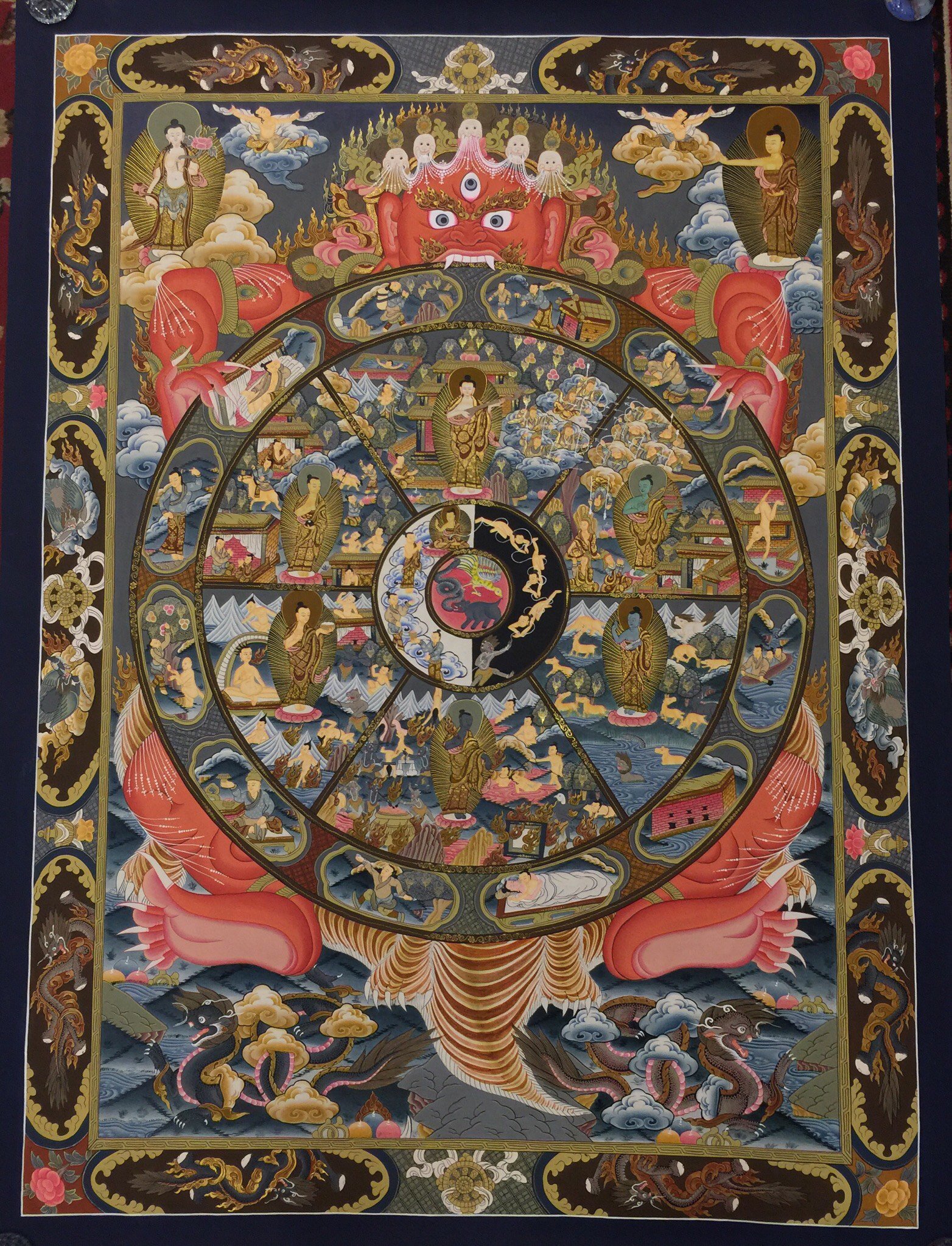 The wheel of life has also termed the Wheel of becoming or the Bhava chakra. The wheel of life is the mandala which represents the complex pictures of Buddhist views of the universe. Buddhists believe that the existence of the cycle of our life, death, rebirth, and sufferings seeks to escape together as a whole.

The wheel of life is very well known by Buddhist monks as it is the most powerful meditation tool. It is also known by the students to learn and understand the teaching of Lord Buddha. This Wheel exemplifies the reasons for the sufferings of our mortal form with the help of both sublime imagery and horrific way. The wheel of life can be seen painted on the walls of many Tibetan Buddhist Monasteries, at the entrance of the temple. This Bhavachakra presents the summary of Buddhism and also reminds people that every action has its consequences. The colorful representation of Bhava Chakra and its concept is explained very early in the life of every child.

Basically, the wheel of life is the spiritual representation made up of four concentric circles that are held with an unyielding grip by the Lord of death, Yama.

The sky with clouds or stars that can be seen above the wheel, represents the symbol of freedom from Samsara or the cyclic existence. Lord Buddha specifying at it represents that Liberation is possible.

The center of the wheel consists of three animal symbols of “Three Poisons”. The three poisons represent:

The bird and the snake coming out of the mouth indicates that both anger and attachment arise from ignorance. Also, the snake and bird hold the tail of the pig at the same time, which indicates that both of them promote even greater ignorance.
Alongside the center circle, there is the second layer which is divided into two half circles. One of them is light-colored whereas the other is usually dark-colored. The darker sides tend to manifest the individuals undergoing the result of their negative actions. Likewise, the light half-circle represents the people encountering the results of positive action and accomplishing spiritual uprising.
After this layer is a board area which is divided into six parts. Each part depicted a different realm of Samsara. These six realms seen are supposed to constitute all the possible states of existence in the universe. And all the beings cycle between these states.

The six parts of the realms are:

World of the hungry ghosts

Because of their narrow throats and necks, the ghosts are not able to eat. Therefore, suffers unquenchable thirst and maddening hunger throughout their whole life. Their greed brought them to this realm. This realm includes unfulfillable or unfulfilled desire; Lord Buddha is represented with a jar full of nectar that symbolizes the virtue of generosity. In simple terms, this is how karma looks when you are both greedy and selfish. You should be generous and make sacrifices to avoid such a fate.

It is believed that whoever ends up here suffers immeasurable cold, impossible heat, and unimaginable pain. The sentence burns slowly over eternal fires, look at their genitals being chopped off and cooked then eaten by insatiable demons. In this case, people believe that cleaning and washing with water lead people out of hell. It explains that: hatred and anger, they’re the way in and patience itself is the way out.

Realms of the animal

This is probably for those who led lives distinguished by weakness and ignorance. The existence of an animal is not as easy as they’re hunted and eaten by other animals or human beings themselves. Here is Buddha with his sword, which represents a symbol for the destruction of ignorance which shows the way out of the realm.

The World of the human

Due to the passions and selfishness, the people are abided by the difficulty of illness, old age, and then death. This area of life is the best of all six, as people have the access to Lord Buddha’s teaching. Therefore, they have the opportunity to escape from the wheel of life. Here the Buddha symbolizes this possibility.

The World of gods

The World of gods is known for the illusion and the pleasure of eternal happiness. This realm sounds tempting but is very dangerous in its own way. People are never far from the edge, as the vanity and pride grow inside is the risk of falling back down into the lower reaches of the wheel of life. Both Bodhisattva and Avalokiteshvara warn people against this by proclaiming the virtue of meditation.

The realm of demigods

The last six areas of life is a world that is inhabited by demigods in a constant fighting, struggle, a never-ending battle with gods. They do not suffer from greed or desire but form continuous jealousy and fight. Jealousy is what keeps them trapped in Samsara, the birth cycle. Lord Buddha in the realm reminds them of this.