Chenrezig (the Jewel in the Lotus) is the universal mantra of Love and Compassion. When we recite this mantra, we are in fact continually repeating the name of Chenrezig, the Buddha of all compassion and love. This mantra is invested by the grace and power of the mind of Chenrezig, who himself gathers the grace of compassion of all the buddhas and bodhisattvas. In this view, the mantra is endowed with the capacity to purify our mind from the veils that obscure it.

Chenrezig, also known as Avalokitesvara, “One who looks with the unwavering eye,” is the most revered of all Bodhisattva, embodying the compassion of all Buddhas.

What is the meaning of Chenrezig Mantra?

The mantra opens the mind to love and compassion and leads it towards awakening. Each syllable has a genuine effect:

In Tibet, the mantra of Chenrezig was recited by everybody. Its popularity and simplicity, rather than lessening its greatness, conferred on it an even greater value. This was expressed in a humorous saying: In the beginning, no suffering in not knowing it. In the middle, no pride in knowing it. In the end, no fear of forgetting it.

What are the benefits of the Chenrezig Mantra?

Chenrezig Mantra is often chanted in order to achieve enlightenment quickly for all beings. 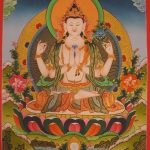