The Detail History of Prayer Flags 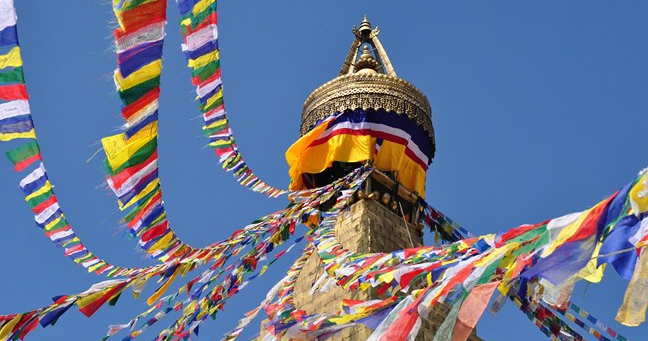 The Detail History of Prayer Flags

The hoisting of flags to ensure good fortune is one of the many customs within the nomadic communities of Tibet that have changed very little for several thousand years. However, the meaning of this ritual has gradually evolved from being of militaristic to religious significance.

That the original use of flags in Tibet was militaristic is illustrated by the term Ru-dar or banner. Ru refers to the gathering of nomads before moving on together to fresh pastures and thus, in an archaic sense this assembly referred to a kind of army. The banners (ru-dar) found in the ancient literature were military flags.

The flying of flags began to acquire religious significance in the Bon tradition and it may be observed that the actual design of the flags also gradually changed. In the corners of some of these flags were images of a tiger, a snow lion, a garuda, and a dragon, and in the center was a horse, around which was written a Bon mantra and a line which read, “May the horse of good fortune run fast and increase the power of life, influence, fortune, wealth, health, and so forth.”

This writing of mantras on the cloth to produce a flag of religious significance can be traced to the immaculate. Yung-drung-gtsang-ma-Zhang-zhung, a collection of Bonpo teachings, which say that when a mantra is wrapped in five colored silk and placed high in the mountains, it will provide whoever sees it with the good fortune to become enlightened.

If you attach a mantra wrapped in this way to the top of a victory banner and pray to it, worship it, and make precious offerings to it, then, according to tradition, you will accomplish all your goals. The meaning of this Bon mantra needs further investigation.

The protective power of mantras

The protective power of mantras is illustrated by the following story. When Buddha was in the Thirty-third realm of the gods, seated on a flat stone, as white as his clothes, Indra, king of the Gods, came and prostrated before him. Indra explained that he and the gods of the Thirty-third realm had suffered a great defeat at the hands of Vemchitra, the king of the anti-gods, and he asked Buddha what he should do.

Buddha told him to memorize the mantra contained in the prayer Ornament at the Crest of the Victory Banner. Buddha explained that he had received this mantra from the Tathagata known as Irrepressible and had himself taught it to many disciples. He said that since the time that he learned the mantra he could not remember even a moment when he felt fear or terror, so he told Indra to carry this mantra into battle to ensure victory.

Great masters have written ritual texts praising the Dra-lha, a deity who helps in overcoming obstacles and enemies, and the hoisting of Dra-lha flags is meant to cause the Dharma to flourish and to promote the welfare of all sentient beings, especially those who engage in these rituals. in an old Dra-lha story, the gods were enjoying the fruits of the wish-fulfilling tree, which grew in the valley of Mt. Meru.

As the tree was rooted in the realm of the anti-gods, they claimed that the fruit was also theirs, and a battle ensued. Indra went to Vajrapani and asked him for assistance. Vajrapani told Indra to invite the brothers of Dra-lha and to ask for their help. Nine weapons and nine deities then appeared from the great ocean. Through the worship of these deities, Indra was able to defeat the anti-gods and achieve victory.

There are many types of Tibetan flags, for example, the dar-ding, a long string of flags flown horizontally between trees or buildings, and the dar-Chen, a narrow flag which is flown from a pole. Tibetan prayer flags can be of any of these 5 colors, blue, white, red, green, and yellow, which symbolize the sky, clouds, fire, water, and earth respectively. If we relate these colors to the physical elements then the blue symbolizes water, green symbolizes wood, red fire, and white iron. There is also a tradition of flying flags which represent the elements of your own body.

Flags are flown on auspicious days such as Sunday, Monday, Wednesday, Thursday, Friday, and when the stars are inauspicious arrangements according to Tibetan almanac. Flags are flown by families from all economic backgrounds, and they are flown on such important occasions as the third day of the Tibetan New Year, marriages, and official functions. Flags are also hosted in the event of interferences, or illness, in order to avert further misfortunes.

The wedding ceremony and Flag

In some parts of Tibet, during the wedding ceremony, the guests gather on the roof of the groom’s house and perform a ritual in which the bride touches the prayer flags. These flags are then hoisted on the building housing the protectors near the site for making incense offerings, and from that moment the bride becomes a member of her new family. After the first year of marriage the bride returns to her home and again performs the same ceremony and in so doing she separates herself from her original family.

Flags are used as protection against harm when traveling. Before passengers enter a boat to cross a river, they perform a ceremony in which flags are attached to the horse shaped figurehead at the bow of the boat. Prayers are said and incense and grain are offered to the gods. In this way, they ensure safe passage across the river.

Originally, flag ceremonies were intended to provide benefit in this life, but as they gradually became more imbued with religious meaning, they came to be associated with benefit in future lives and the achievement of spiritual as opposed to material success. Although the actual ceremonies and rituals have changed very little, the significance or content of the rituals has gradually evolved a spiritual element through a mixture of Bon and Buddhist symbolism.