The unique characteristics of Karma and the Karma chakra 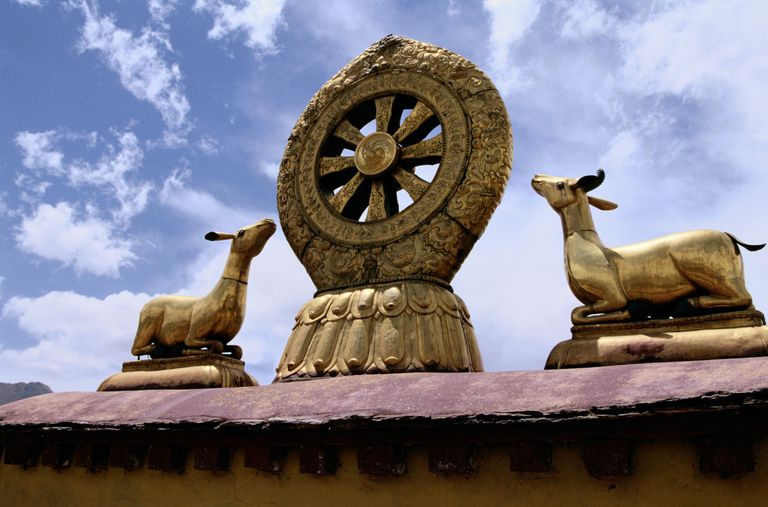 The unique characteristics of Karma and the Karma chakra

The Nature of life

In particular, what we consider to be pleasure in life, for example having a companion or building a family, some way or another brings a lot of pain, too. Every one of us seeks happiness, so we look for a companion, thinking that companionship will give happiness, but we find it gives us a lot of pain, too. It is natural, not surprising. Even with all these pains we hope to gain some kind of pleasure and bear the pains until we can’t bear them anymore.

In particular, what we consider to be pleasure in life, for example having a companion or building a family, some way or another brings a lot of pain, too.

Every one of us seeks happiness, so we look for a companion, thinking that companionship will give happiness, but we find it gives us a lot of pain, too. It is natural, not surprising. Even with all these pains, we hope to gain some kind of pleasure and bear the pains until we can’t bear them anymore.

That is where this famous Buddhist business of suffering comes in. A lot of people says that ‘Buddhists always talk about lots of suffering.’ Maybe true, maybe we discovered too much. That’s why we seek a solution for it.

The problems we face in our lives now are not so difficult compared with the problems we’ll possibly face in the future. When someone gives little example of relationships and problems, they don’t mean it is the case for everybody, so don’t take it as a blanket statement. For some people, relationships might not be a problem, but for some, it is too much of a problem and they get divorced several times. That happens.

Some people have a good life, you can’t deny that, but even that good life has a lot of problems, too. It can never be problem-free. It has economic problems, health problems, problems in fulfilling our wishes. The last ones are the worst because our desires are so high, you have no idea how high they are!

When we see our problems, we seek a solution for them, so we take refuge in Buddha, Dharma, and Sangha. When we take refuge in them, they say, ‘Oh, yes, fine, we will try to help you but we can’t, we can’t help you.’

That’s what they say!

Then what to do?

They tell us, ‘You can help yourself.’

They talk about karma and that is how all karma business started.

You have to talk in accordance with what Buddha said about karma because as told before, subtle karma is even more difficult to understand than shunyata.

When we look for the dharma, we should not look for the eternal dharma. This is one of the most important points people always tend to overlook or miss somehow. When we are looking for Buddha, Dharma, and Sangha, we are definitely looking for what is our own: my own future Buddha, my own dharma and my own sangha. This is the real thing.

Take Atisha for example, the very famous Bengali pandit, scholar and saint, who brought Buddhism over to Tibet or rather enlarged and clarified it. Once he was following his guru, in Tibetan lama, 5 lama Avadutipa, passing over a bridge. Suddenly Avadutipa turned back, looked at Atisha and said, ‘Atisha, Atisha!’ Atisha said, ‘What is wrong?’ Avadutipa said, ‘Look down there! If people are not careful with their karma, look, then this is what will happen!’ Mentioning a tremendous number of names, including famous ones, he pointed down, ‘Look, there is so and so, and there is so and so, all of them they are falling into the hell realms!’ That is what Avadutipa said.

Another incident. One of the most highly developed and powerful Tibetan saint-scholars is known as Ra Lotsawa. He brought the tradition of Yamantaka6 to Tibet. Ra Lo was so powerful! In terms of mystical powers, there is nobody to be compared with him. He was fantastic! No one could challenge him, no way! For various important reasons relating to the future benefit of mankind, Ra Lo actually did away with thirteen bodhisattvas – I am telling you horrible stories sometimes – and that included the son of Marpa, Tharmandote. At the time Ra Lo was finishing off Tharmandote, Milarepa was holding Tharmandote’s horse.

The reason Ra Lo killed him was that Marpa had brought certain teaching from India and which Tharmandote was planning to spread. That teaching could be used to transfer your consciousness while meditating into another person’s body so that you can act like that other person. Ra Lo made the decision that teaching this was no good. It had some benefit, but if it spread too much, after some time you wouldn’t know who was who, so he decided to cut that teaching out.

He appealed to Marpa, to please stop Tharmandote, saying that if he allowed his son to spread this method it was going to be terrible. Marpa wrote back to him, ‘Who are you to tell me what to do!?’ Ra Lo appealed again and Marpa ignored it. Then at last Ra Lo wrote to him, ‘If you don’t tell your son to stop, I am going to destroy him within seven days.’ Indeed, within the next seven days, Tharmandote died; his horse threw him. He was riding a horse when all of a sudden a number of geese flew across and while Milarepa was holding the bridle, the horse jumped up, Tharmandote fell off, broke his skull and died.

Ra Lo used to say, ‘Including Tharmandote I have destroyed thirteen bodhisattvas, but I will not go to the hell realms. This is my special power!’ In the end, that did turn out not to be true. Ra Lo did go to the hell realm, but very briefly, only for a period equal to the time that it takes a thrown ball to hit the ground and bounce up again.

A number of things, but I would like to emphasize three main points.

This shows how important karma is. If you don’t pay attention to karma, say you are a very strong meditator, and even do a lot of Vajrayana practices, saying mantras and so forth, what happens when you die?

The characteristics of karma

Aghast at the searing blaze of suffering in the lower realms we take heartfelt refuge in the Three Jewels. Inspire us to eagerly endeavor to practice the means for abandoning negativities and accumulating virtues.

When Buddha was alive some very interesting things happened. Once there was a famous, wonderful singer, who had a tremendous beautiful voice. Everybody loved her singing, but every time she had a performance, she would sing from behind a curtain. She had a terrible appearance, the ugliest appearance you can ever imagine, and that is why she sang from behind a curtain all the time.

Now during the Buddha’s lifetime, anyone who had a question could go to Buddha and ask him, ‘Hey, Buddha, what is this about?’

So here also somebody went to Buddha and asked him, ‘What is this? This lady sings so beautifully, everybody falls in love with her songs, but the moment they see her, everybody has to take two steps back, she looks so terrible.’

Buddha answered ‘In one of her previous lives she happened to be a man who was building a stupa. While working, he kept on cursing it, saying to the people, ‘What nonsense this funny building here is. It is terrible, it is so big, it will never be finished, what nonsense!’

He hated what he had to do. When it was finally finished, he thought that it was pretty good and he felt embarrassed about his saying bad things about it. To make it right, he bought a beautiful golden bell out of his salary and put it on top of the stupa as a decoration. Now, because of the karma created by cursing and saying terrible things, her appearance is terrible, but the golden bell made her voice sound great.

That is what it means: karma is definite. Whatever you do, the same way you created the karma, you’ll get the result.

Things inside grow much faster than things outside. Last night I mentioned the example of the tree growing. Now I have to act like a children’s fairy-tale storyteller. I don’t have happy-ending fairy-tales like Prince Charming and all that, but I do have tales. On the one hand, these are like fairy-tales, but mind you, on the other hand, they are true stories, too.

If you do not create certain karma, then no matter what you do, you cannot meet with the result. This is the third characteristic of karma. Remember, about that golden elephant. The ruler of the land, the most powerful guy on that earth, the king Magyedha, tried to snatch that elephant seven times, but since the ruler did not have the karma to use that elephant, it did not last.

If one creates karma, it will definitely give the result

In a sutra it says:

“Our karma, even if it was created hundreds of eons ago, will not disappear and when the conditions are right, it will give the result.”

This means that no matter how long the karma stays with you, it doesn’t become old or go bad. Remember, yesterday we told you that time makes karma grow. Time always makes it grow but it doesn’t make it go bad at all.

In other words, no matter how small and how weak the karma might have been, it is not just going to disappear. 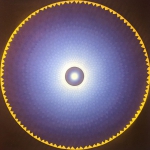 This blue lotus mandala is hand painted by the Nepali artist. To finish this painting the artist took nearly 3o days. After several steps of Mandala Making process this mandala was ready. The mandala is perfect for meditation.
Buy Padma Mandala Online