All about Manjushri Bodhisattva – Meaning, Iconography and Belief 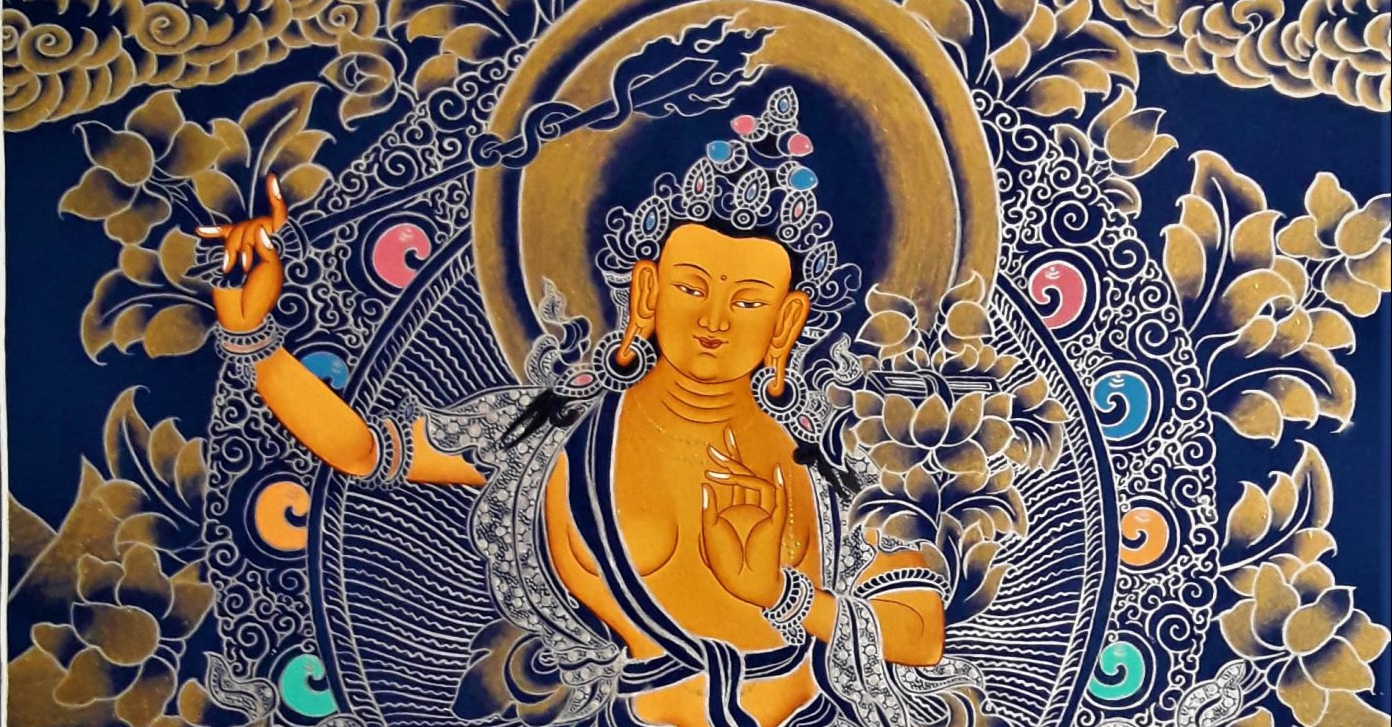 All about Manjushri Bodhisattva – Meaning, Iconography and Belief

Manjushri is the Bodhisattva of Wisdom. The sword in the hand of Manjushri is called the Prajna khadga or the Sword of Wisdom, which is believed to destroy the darkness of ignorance by the luminous rays issuing out of it.

Manjushri, the full name of Manjushri, is a transliteration of the Brahman, which translates into a wonderful virtue, a wonderful head, and wonderful auspiciousness. Manjushri is a representative of prajna wisdom, often appearing in the classics of Prajna, and is the top of the Huazang world with Puxian Bodhisattva.

Therefore, it is represented by Manjushri, and it is a metaphor for wisdom. And understand the importance of prajna in Dharma.

The Buddha once said that in the past, Manjushri had taught him Dharma. Therefore, Manjushri was also called the “Three Worlds.” In many classics, Manjusri is promoted as the teacher of the Buddhas.

In fact, Manjushri has long been a Buddha in the past, such as “The Buddha in the Dragon”, in the “Shouyan Sanjing”, “Pu Ming Buddha” in “The Eighty-eight Buddhas” Both refer to Manjushri.

The word Manju means “charming, beautiful, pleasing” and Shri means “glory, brilliance”. The Bodhisattva is regarded as the crown prince of Buddhist teachings, or the one who can best explain the Buddhist wisdom, that is able to extinguish afflictions and bring about enlightenment.

Manjushri has this title because eons ago, he was the instructor for seven different Buddhas, the last being Sakyamuni Buddha.

Manjushri is often depicted with his right hand holding a double-edged flaming sword and his left hand holding a lotus flower on which rests the Prajnaparamita (Great Wisdom) Sutra. He is often seen riding a lion. The Prajnaparamita Sutra on the lotus flower symbolizes wisdom as pure as a lotus. The sword represents the sharpness of wisdom that to cut through illusion. The lion is called the king of a hundred animals, and this symbolizes the stern majesty of wisdom.

There is no doubt that the place assigned to Manjushri in the Buddhist pantheon is one of the very highest. The MahSyanists consider him to be one of the greatest Bodhisattvas.

They believe that the worship of Manjushri can confer upon them wisdom, a retentive memory, intelligence and eloquence, and enables them to master many sacred scriptures.

It is no wonder, therefore, that his worship became widely prevalent amongst the Buddhists of the North. They conceived him in various forms and worshipped him with various mantras.

Those who could not form any conception of him according to Tantric rites attained perfection only by muttering his numerous mantras.

It is difficult to fix the exact time when Manjushri entered the pantheon of the Northern Buddhists. His images are not found in the Gandhara and Mathura schools of sculpture, and Asvaghosa, Nagarjuna, Aryadeva do not mention him in their works.

His name occurs for the first time in the Aryamanjushrimulakolpa which is obviously a pre’Guhyasamaja work, and then in the Guhyasamaja Tantra which is dated circa 300 A.D. In this work, there are at least four references to Manjushri and three to Manjuvajra.

His name also occurs in the Sukhavati Vyuha or the Amitayus Sutra in its smaller recension 8 which was translated into Chinese between A.D. 384 and 417.

Subsequent Buddhist works, however, give many references to Manjushri, and in the accounts of foreign travelers also finds mention of Manjushri.

The Adibuddha manifested himself here in the shape of a flame of fire, and so it is called the Swyambhu kshetra( place of the Self- Born ). This place is consecrated with a temple of Adibuddha, and close to it is the Manjushri Hill now known as the Sarasvatisthana.

The information about Manjushri as gleaned from the Svayambhu Purana is given below in brief.

It is said there in that Manjushri hailed from China, where he was living on the mountain.  He was a great saint with many disciples and followers, including Dharmakara, the king of the country.

Receiving divine intimation one day that the self-born Lord Adi Buddha, has manifested himself as a flame of fire on a lotus on the waters of Lake Kalihrada in Nepal, he forthwith set out for that country along with a large number of his disciples, his two wives and king Dharmakara, with the intention of paying homage to the deity.

When he came to the lake, however, he found a great expanse of water surrounding the god rendering him quite inaccessible, and it was with immense difficulty that he could approach the flame and offer his obeisance. Having at last succeeded in doing so, however, he cast about in his mind for some means of making the god accessible to all and he began a circuit of the lake.

When he reached the southern barrier of hills, he lifted his sword and clove it asunder. The hill was split into two, and the water rushed through that opening, leaving behind a vast stretch of dry land, which is now known as the as the Nepal Valley.

The waters of the Bagmati flow down even to this day through that opening, which is still called “sword-cut”.

Creation and Transformation of Manjupattana

After that Manjushri created a temple over the flame of fire and on a hillock nearby he made his own abode, and also a Vihara (or monastery) still known as the Manjupattana, for his disciples.

Manjushree is supposed to have built the town Manjupattana, probably around Balaju area. Later kings shifted from Manjupatana to Sankasya on the Banks of Ikshumati (Tukucha). This same town as per Hindu chronicle is supposed to be Nandisala, credited to Lichchavi kings.

Dharmakara the King of Nepal

Lastly, he made Dharmakara the King of Nepal. These and many other pious deeds are ascribed to Manjushri in the Swayambhu Purana.

Putting everything in proper order, Manjushri returned home and soon attained the divine form of a Bodhisattva, leaving his mundane body behind.

Civilization to Nepal from China and Manjushri

From above it appears that Manjushri was a great man who brought civilization to Nepal from China. He had apparently extraordinary engineering skill and was a great architect.

It is not definitely known when he came down to Nepal from China, but there is no doubt that in 300 A. D, he was well-known as a Bodhisattva.

He wielded great influence on the minds of the Buddhists and the Mahayanists worshipped him in various forms and in various ways. He is known in almost all the countries in the continent of Asia where Buddhism had it’sway.

Manjushri is worshipped in all Buddhist countries and has a variety of forms. Manjushri has several names such as Manjuvajra, Manjughosa, Dharmadhatuvagisvara and so forth. As one of the sixteen Bodhisattvas Manjushri is taken as second in the group headed by Maitreya.

In the Manju vajra, Mandala Manjushri comes as a Bodhisattva in the third circle of deities surrounding the principal god Manjuvajra who is represented along with his Prajna or female counterpart. 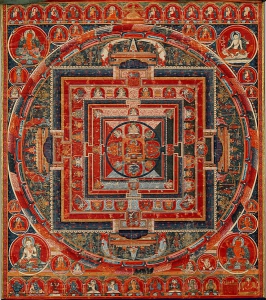 The Tibetan King in the eleventh century, the Tsongkhapa, also the founder of Ge-lug-pa School of Tibetan Buddhism, which the Dalai Lama have been head of the sect, was believed as the manifestation of Manjushri.

Tsongkhapa, after engaging in an intensive 4-year retreat in a cave, was able to see Manjushri and also receive teachings directly from him.

Sometimes, Manjushri is depicted riding on a lion, the king of the beasts, symbolizing that Manjushri teaches the Dharma without fear or favor.

Manjushri belongs to the group of eight Dhyani-Boddhisattva and is therefore represented like a prince with all the Boddhisattva ornaments.

Manjushri as one of the eight Bodhisattvas is recognized by the favorite name of Manju ghosa (soft voice) and under this name, he is described in the Lokanatha sadhana of the Sadhanamala.

Manju ghosa is of golden color and he holds in his two hands the sword and the book.

Vajraraga Manjushri is also known by the two names of Vak and Amitabha Manjushri showing his allegiance to the Dhyani Buddha Amitabha of red color.

Vajraraga is one-faced and two-armed. His two hands are joined on his lap forming what is called the Samadhi or the Dhyana mudra. Vajaraga is white in color and he is seen in Samadhi Mudra with Vajraparyahka Asana. 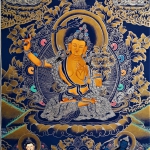 Manjushri is especially associated with the wisdom of awakening. Manjushri is traditionally used as a support for one’s meditation practice
Buy beautiful Manjushri Thangka Painting