Wutaishan Mountain in China is considered special for the Buddhist deity/bodhisattva Manjushri. According to oral history and Chinese literature, it was Drogön Chögyal Phagpa who first talked about the five different forms of Manjushri.

5 forms of Manjushree are represented on each of the five peaks: central and four directions. The Five Manjushri forms are not depicted in a consistent manner.

There are many iconographic differences appearing between the various paintings be they central figures or minor figures in a composition. This may suggest that there was no original definitive iconographic description for each of the five forms of Manjushri. These forms became more standardized after the publication of the White Beryl astrological text of Desi Sangye Gyatso in the 17th century.

Tibetan astrology is said to have originated from the teachings of Manjushri while he dwelt on Mount Wutaishan. It is also from here, looking out onto the world, that Manjushri perceived the brilliant light shining from the relics of Dīpankara Buddha in the lake of what is now known as the Kathmandu Valley. Manjushri used his sword to cleave an opening in the mountains to drain the lake. The relics of Dīpankara Buddha are safely contained in the Swayambhunath Stupa.

Manjushri is either seated on a lion or on an elephant. Both animals have associated with a fully enlightened buddha.  However, as a bodhisattva, he is depicted as a sixteen-year-old youth.  This is a confirmation of the fact that wisdom is not merely associated with maturity and age, but it is a direct consequence of anyone’s logical inquiry into the true nature of reality.

Manjushri is the bodhisattva of transcendent wisdom. He carries in his right hand the double-edged sword able to cut through illusion and with his left hand a blooming lotus that supports a book, the Prajnaparamita Sutra.

In the Buddhist pantheon, he is depicted as a youth of sixteen years in order to convey the Buddhist insight that wisdom is not a matter of mere experience or years, but results from the cultivation of intellectual genius, which can penetrate directly to the bedrock of reality.

Wisdom is the most honoured virtue in Buddhism, called the Mother of all Buddhas since only wisdom makes possible the great bliss of total freedom from all suffering that is the goal of all living beings. 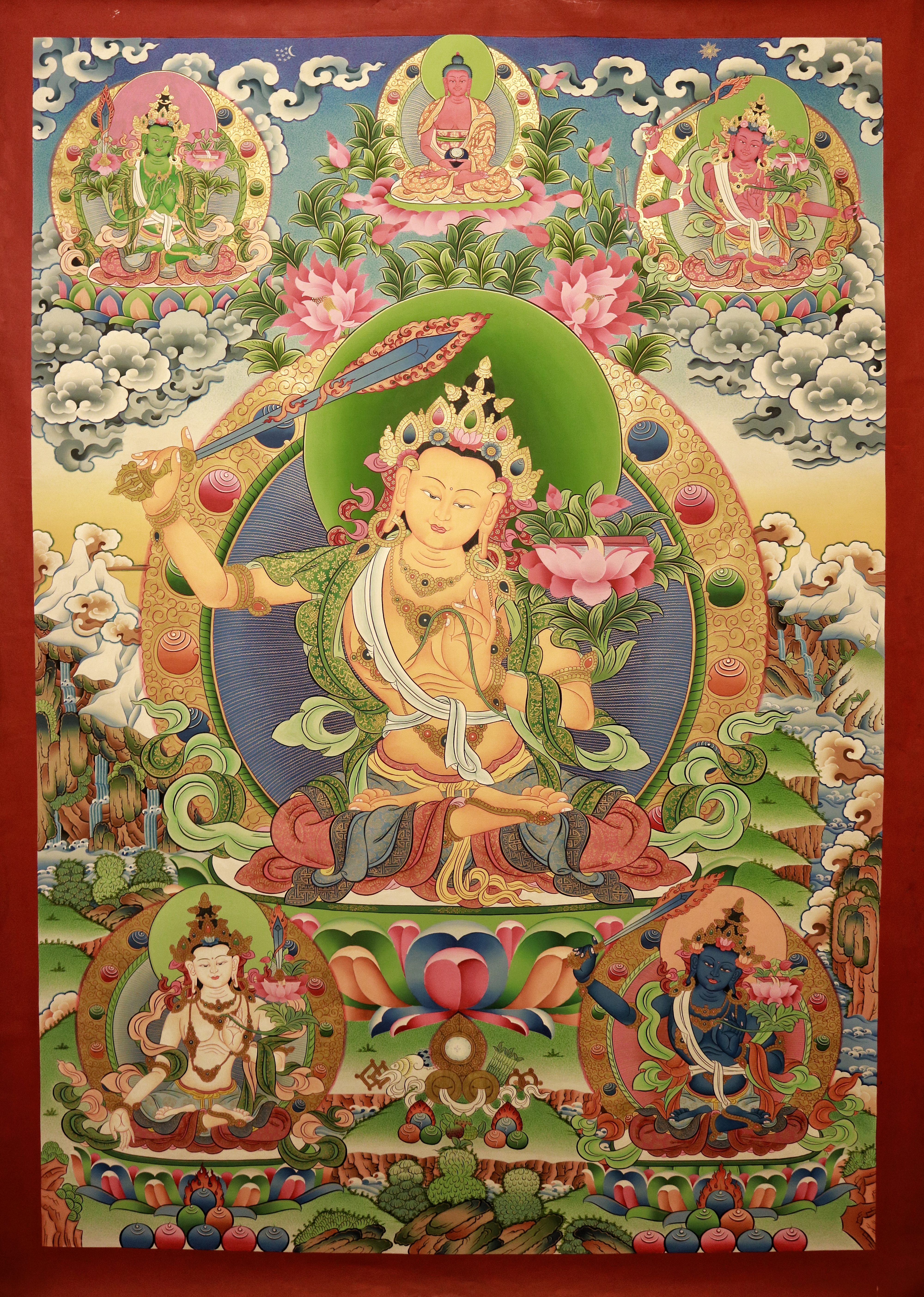 Red Manjushri is another form of Manjushri with a body red in color, one face, 4 arms.

The right hands are holding a flaming sword and an arrow.

The left-hand holds the stem of lotus with the book on the top of lotus and bow.

Red Manjushri is often depicted as a beautiful youth, seated cross legged on a lotus-flower throne, attired in princely silks and ornaments.

Green Manjushri is another form of Manjushri. Lord Manjushri with a body green in color has one face and two arms.

Black Manjushri is a wrathful healing form of Manjushri used to remove inner and outer obstacles.

Lord Manjushri with a body blue-black in color, one face, two arms.

The left-hand holds the stem of an utpala held to the heart with the One-Hundred-Thousand verse book above.

He is adorned with silks, jewels, and bone ornaments seated with the feet in vajra posture.

White Manjushri, is another form of the wisdom deity Manjushri, white in color, with one face and two arms.

In this form, he is generally represented with his legs crossed in vajra posture; his right hand in the mudra of supreme generosity and left holding the stem of a lotus on which rests a flaming sword.

There are other traditions where White Manjushri has the simple attribute of a book resting on an utpala flower or with multiple faces and arms, or riding a lion.

Arapacana Manjushri, or Yellow Manjushri is often depicted as a beautiful youth, seated cross-legged on a lotus-flower throne, attired in princely silks and ornaments.

In his right hand, raised above his head, he wields the symbol most distinctively, a flaming sword of wisdom that cuts through the ignorance which binds sentient beings to a cycle of suffering and unhappiness.

In his left hand, at his heart, he holds a book, a volume of the Perfection of Wisdom, representing both the source and embodiment of his awakened understanding.

Meaning and Benefits of Manjushri Mantra