Five Jambhalas are also called as Pancha Kuber. Yellow Jambhala is in the center of the thangka.

The yellow background with clouds and mountain is the perfect match for this thangka. This thangka is handpainted in Kathmandu Nepal by Master Thangka Artist.

Jambhala is known as Kuber which is “God of Wealth”.

The small description of 5 Jambhalas is described with their respective mantras. 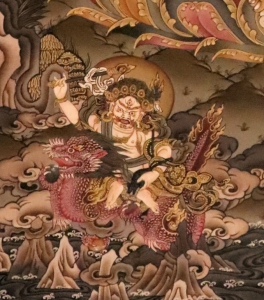 White Jambala is born from the right eye of Avalokitesvara Bodhisattva, also known as the manifestation of Avalokitesvara Bodhisattva. According to the sutra, his mantra can stop suffering, destroy bad karma and have a bodhichitta or mind.
His mantra can also avert disaster and sickness. He also brings wealth to all sentient being by chants his mantra. Tibetan name is Dzambhala Gapee which means, white Jambala.
White Jambala sits on a snow lion, although some artists depict him sitting on a dragon and in his left hand, there is also a mongoose that spits out precious diamonds and ornaments. 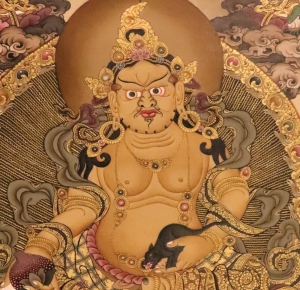 Yellow Jambala is the manifestation of Buddha Ratnasambhava. He protected the dharma and if anyone calls his name, he will come and help the person.
If one has trouble with finance or anything, one can chant his mantra and he will come and help. But one must have a bodhi mind and practice Buddhism properly to attain his blessings. One can also gain wealth, wisdom, intelligence and at last! Attain Buddha hood!.
Yellow Jambala sits on a lotus, sun and moon disk. He holds a mongoose in his left hand and from its mouth spews forth precious jewels.

Black Kubera is the manifestation of Buddha Akshobhaya. Black Kubera is also called as the chief of the five great Jambalas as he is said to have given people wealth and happiness. He is also known as one of the Hindu gods of wealth, Kubera.
Those who chant his mantra will get wealth and also if one has any kind wishes, he will also fulfill it and bring happiness. Black Jambala has two mantras.
Black Jambala Usually Standing upon a corpse and holding Mongoose in his left hand and Kapala is in right hand. he is Black in color. 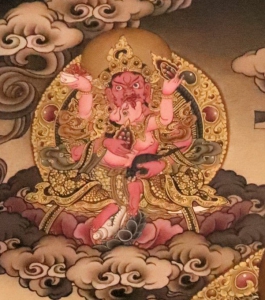 Red Jambala is the manifestation of Vajrasattva. He has two faces and four arms and holds a treasury mongoose on his left hand.
Tibetan name for him is Dzambhala Mapo if one chants his mantra sincerely, one will be protected by him and also gain wealth and one can lead a very good life and become popular.
Red Ganpati also worshiped as Red Jambala. 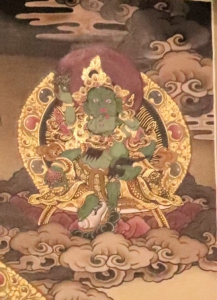 Green Jambala is also a form of Buddha Akshobhya, who is blue in color. Green Dzambhala made a vow in front of Buddha Sakyamuni that he will protect anyone who chants his mantra or chant his name.
When one has difficulties, it is best to chant sincerely in one’s heart the mantra. Green Jambalas mantra is the same mantra as the yellow Jambhala Mantra.

Be the first to review “Five Jambhala Thangka” Cancel reply

8
Sep
2021
Deities, Jambhala Samiksha
Jambhala, Black (Tibetan: dzam bha la, nag po), a wealthy deity popularized in Tibet by Bari Lotsawa and the Kashmiri teacher Shakyashri Bhadra. Black Jambhala is known by Kubera in Hinduism. Kuber is the god of wealth. Originating in ancient India, he appeared from the river’s waters and passed on the ability to generate wealth to a monarch whose realm was experiencing severe financial troubles at the time. He also helps the impoverished and .
Read More

7
Jun
2021
Art, Buddhism, Himalayan Art, Mandala Samiksha
Vasudhara is named Shiskar Apa in Lahul and Spiti. She is comparable to the Earth goddesses Phra Mae Thorani in Theravada and Tai folk religion and Bhumidevi and Prithvi in Hinduism. She is also known as Goddess of Wealth and Abundance. Who is Vasudhara? Vasudhara (Tib. Norgyunma), the Buddhist bodhisattva of money, prosperity, and abundance, is a Buddhist bodhisattva of riches, prosperity, and abundance. She is revered in many Buddhist countries and is depicted in Buddhist art .
Read More

11
Jan
2021
Art, Deities, Himalayan Art, Vajrapani Samiksha
Vajrapani Krodha has five garudas according to a Marpa Kagyu lineage. Vajrapani Krodha is known as a wrathful meditational deity. Vajrapani Krodh is representing the power of all Buddhas. The reverse of the painting of Krodha Vajrapani is decorated with a drawing of a stupa to represent the mind of all enlightened ones. Each of the figures of human teachers and deities is mar marked with the three letters, ‘om ah hum’, representing the .
Read More