All you need to know about the types of Thangka Paintings

Thangkas The origin of Paubha or Thangka paintings may be attributed to the Nepalese artists responsible for creating a number of special metal works and wall- paintings as well as illuminated manuscripts in Tibet.

Realizing the great demand for religious icons in Tibet, these artists, along with monks and traders, took with them from Nepal not only metal sculptures but also a number of Buddhist manuscripts.

To better fulfill the ever-increasing demand Nepalese artists initiated a new type of religious painting on cloth that could be easily rolled up and carried along with them.

This type of painting became very popular both in Nepal and Tibet and so a new school of Thangka painting evolved as early as the ninth or tenth century and has remained popular to this day.

One of the earliest specimens of Nepalese Thangka painting dates from the thirteenth /fourteenth century and shows Amitabha surrounded by Bodhisattva.

While the Majority of Thangkas are painted on canvas, there is also a small group of Thangkas which are not painted and which consists of other materials. 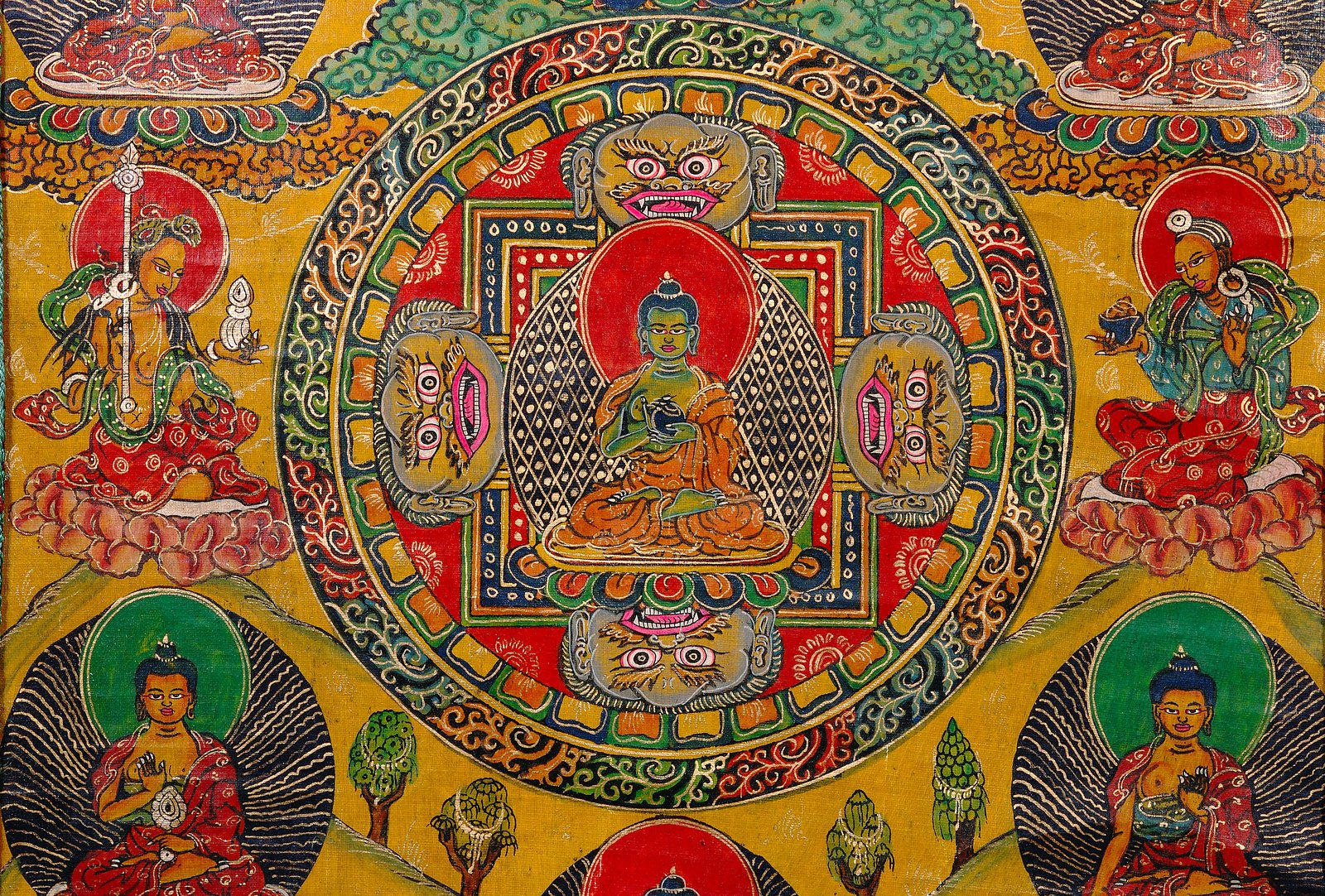 These paintings are produced on a regular Thangka canvas however, before painting the outline of the depicted Life of Buddha is printed with a wood engraving on the canvas.

This simplifies the painting process and takes care of unique results. This kind of Thangka is called “dpar ma” in Tibetan.

This antique scroll painting was embroidered. It shows the god of wealth “Vaisravana”. These special thangkas were not painted. They were embroidered with colored silk.

Embroideries with Tibetan Buddhist subject matter were executed in the far eastern part of Tibet and China.

Applique Thangkas are not painted. They consist of many single pieces of cloth. We find this category especially among the giant Thangkas, which are hung down on special large Thangka walls of the monasteries on special festival days.

This type of Thangka is a particularly Tibetan style, as testified to in pre-17th-century texts. Fragments of cloth of various colors – most often silks, traditionally imported from China or even from India – are cut into desired shapes and juxtaposed to form a kind of mosaic.” The pieces are either sewn onto a background or to each other.

Rigid bands of golden binding, made of leather or sometimes of horse or yak hair mixed with threads of gold, hide the seams and circle the contours. Certain details are embroidered or even painted on. A-frame or border similar to those of painted Thangkas gives further support for the finished work.

This Thangka is woven. There is no historical background for this category. Because of the Chinese occupation of Tibet and the destruction of the traditional Tibetan culture, there are very few Thangka painting artists remaining, especially in Tibet.

Thus this kind of Thangka gives Tibetans the opportunity to possess their own Thangka for the family altar.

wooden carved thangkas are 3-dimensional thangkas. The figures are carved in wood by the special woodcarver.

This is a wheel of life thangka made of bronze. The Bhavachakra, the Wheel of Life or Wheel of Becoming, is a thangka which is a complex picture representing the Buddhist view of the universe. To Buddhists, existence is a cycle of life, death, rebirth, and suffering that they seek to escape altogether.

This Thangka is made of Paper Mache, therefore a special form is used. After pressing and drying the paper pulp the colors are put on.

This special manufacturing gives the Thangka a small three-dimensional appearance.

Buddha Applique
Applique is the ornamental needlework for creating certain design and patterns. The picture of the Applique below is of Buddha sitting in meditative position.
Buy Buddha Applique