8 Emanations of Ratnasambhava (Male and Female)

8 Emanations of Ratnasambhava (Male and Female)

Ratnasambhava is one of the principal 5 Dhyani Buddhas in Mahayana and Vajrayana Buddhism. He is the head of a group of deities who carry jewels and are family symbols.

Comparatively, Ratnasambhava is unimportant in the pantheon of the Northern Buddhists, as is evident from the small number of deities that emanate from him.

It has already been pointed out that Jambhala and Vasudhara were known long before the Dhyani Buddhas were ushered into existence and it appears, therefore, that Jambhala has been assigned to Ratnasambhava at a late period.

Jambhala is connected with wealth and is said to distribute gems, jewels, and riches to his devotees.

Again Ratnasambhava means ‘Jewel-born’ and whom might Jambhala, the god of wealth, call his sire if not the Dhyani Buddha born of jewels.

In spite of all this, the Buddhists were divided in their opinion as to the sire of Jambhala, the followers of the Aksobhya cult holding him as originating from Aksobhya.

Mahapratisara, another of his emanations, belongs to the Pancaraksa group and affiliates herself to Ratnasambhava in the same way as the other members of the group affiliate themselves to one or another of the five Dhyani Buddhas.

Ratnasambhava is distinguished from the other Dhyani Buddhas by his yellow color and the Varada mudra he displays with his right hand.

The male deities that emanate from Ratnasambhava are listed below:

Jambhala is the god of wealth who emanate either from Aksobhya or from Ratnasambhava. The characteristic feature of Jambhala emanating from Ratnasambhava is that he carries the mongoose in his right hand and the citron in the left. The mongoose is supposed to be the receptacle of all gems and jewels, and when Jambhala presses the two sides of the mongoose it vomits the treasures within.

This Ucchusma Jambhala is identical in form of Aksobhya. Jambhala in his fierce form of Ucchusma or Dimbha is not known either in Tibet or in China.

The female deities that emanate from Ratnasambhava are listed below:

Buddhist Deity, Vajratara is also popularly known as Mahacinatara and is one of the 21 Taras present in the Buddhist scriptures. The other names for Bodhisattva Vajra Tara are Blue Tara, Vajra Tara, Ugra Tara, and Ekajati or Ekajata.

Mahapratisara is a Bodhisattva belonging to in the Mahayana and Vajrayana Buddhism. She is sometimes presented as the consort of Vairocana. Mahapratisara has four heads and eight arms. Mahapratisar is white in color and her heads are successively yellow, white, red and green.

She is the Buddhist bodhisattva of wealth, prosperity, and abundance. Vasudhara is popular in many Buddhist countries and is a subject in Buddhist legends and art.

Goddess Aparajita is a destroyer form of Sri Durga. She manifests from the womb of the earth with the help of

Vajrayogini is another of the important and popular goddesses who does not seem to bear the image of any of the Dhyani Buddhas on the crown. she is a Tantric Buddhist female Buddha.

She is a companion of Red Tara Kurukulla, but her independent form shows the yellow color. Prasannatara stands on the moon over the double lotus, is radiant with the glow of the sun, tramples under her left foot Indra, under the right Upendra, and presses Rudra and Brahma between the two, and destroys the veils of ignorance 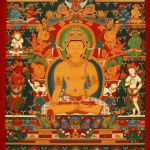 Ratnashambhava is head of the Ratna family. He is a Yellow in color. Ratnasambhava is the embodiment of the Jewel family and one of the members of Five Dhyani Buddhas.
Buy Beautiful Ratnasambhava Thangka Painting