All about Buddhist Tattoo – Symbols and Meaning

Buddhist tattoo is the representations of Buddhist symbols, mantras, and deities. In the present context, tattoo lover loves to have a tattoo of Buddha, Tara, Zambala, eight spokes, Mahakala, mantras, mandalas and so on.

Buddha tattoos are meant to replicate the teachings of this great spiritual leader and mentor. The tattoos are not necessarily preferred by only the followers of Buddhism, but a large number of people who believe in the ultimate truth of life, that one needs to overcome all sufferings and temptations of life to reach the stage of salvation or nirvana.

Famous Buddhist Symbols meaning and use in Tattoo World

In the Buddhist tradition, these eight symbols of good fortune represent the offerings presented by the great Vedic gods to Shakyamuni Buddha upon his attainment of enlightenment.

Brahma was the first of these gods to appear before the Buddha, and he presented a thousand-spoked golden wheel as a symbolic request for the Buddha to teach through ‘turning the wheel of the dharma’.

The great sky god Indra appeared next, and he presented his mighty white conch-shell horn as a symbolic request for the Buddha to ‘proclaim the truth of the dharma’.

The parasol Meaning and Tattoo

The parasol is a traditional Buddhist symbol of both protection and royalty. It is believed that it will protect from negative powers but also to enjoy a fresh shadow. 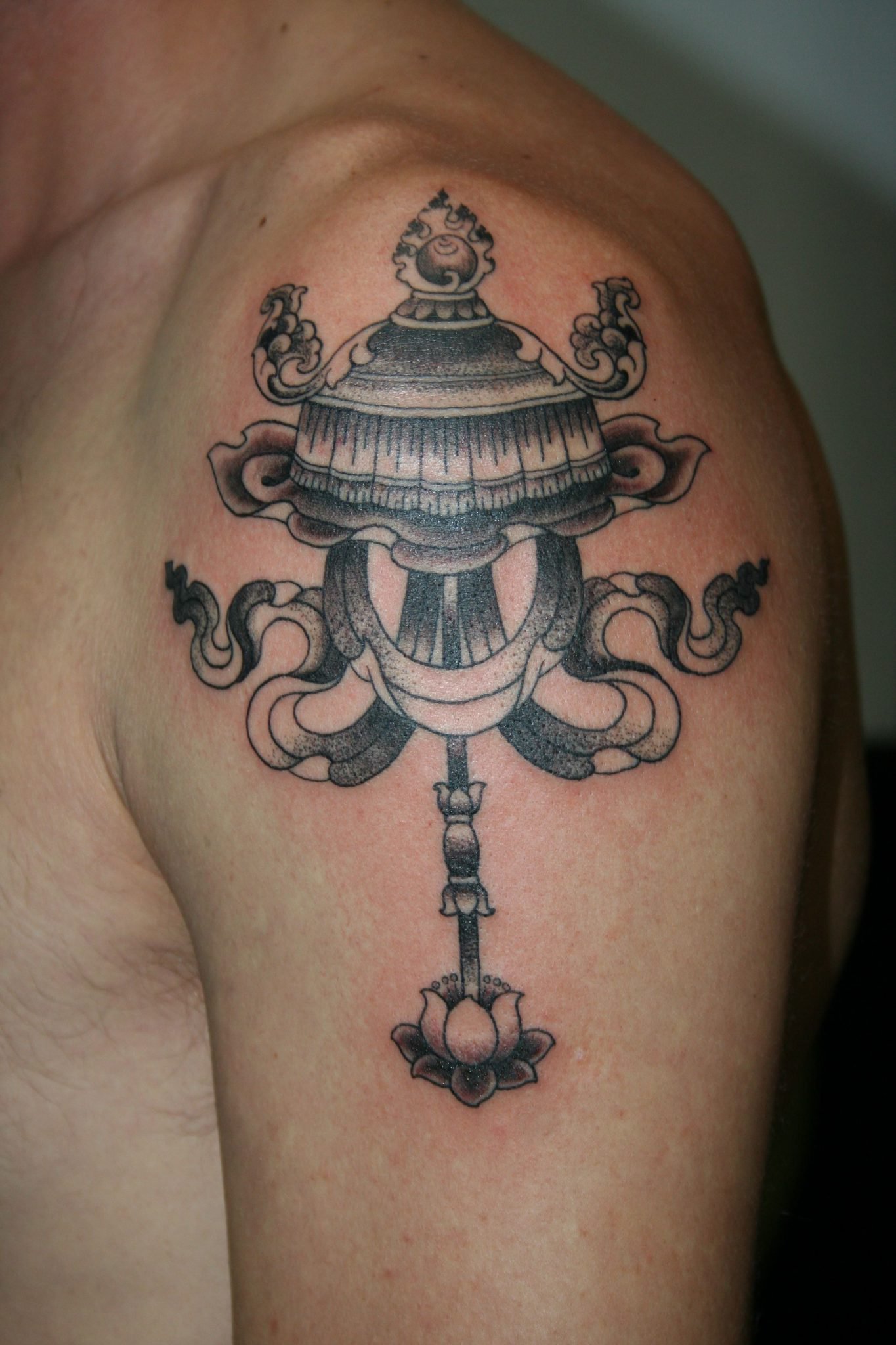 The golden fishes symbol is one of the Eight Auspicious Symbols of Buddhism. It consists of two fishes, which usually appear standing vertically with heads turned inwards towards each other.

The two golden fish Ganges and Yamuna, to swim free and cross the ocean of problems. 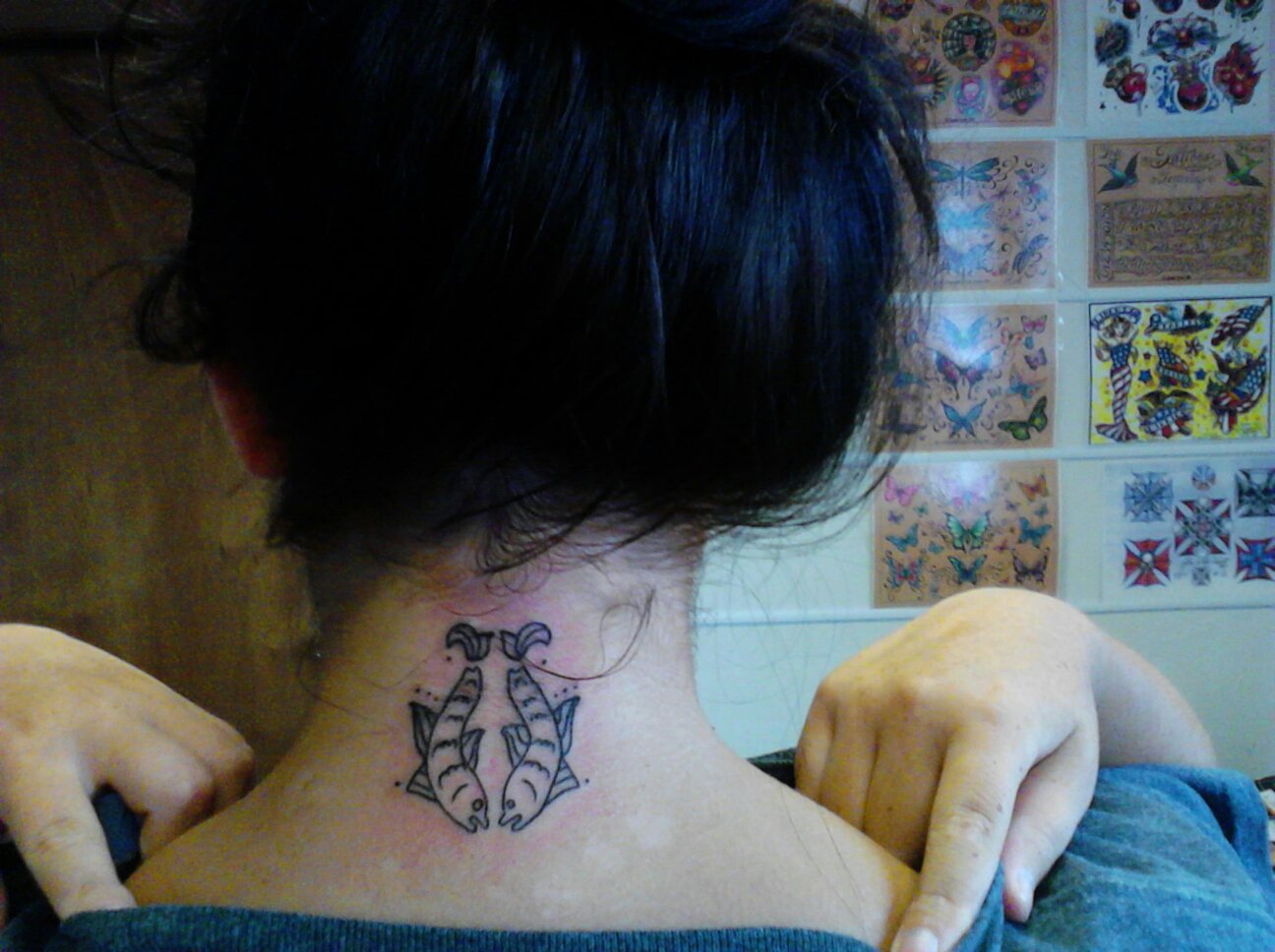 The Conch Shell Meaning and Tattoo

The conch shell has survived as the original horn trumpet since time immemorial. The right turning conch represents the awakening with the sound of Dharma teachings.

Vajrayana Buddhism absorbed the conch as a symbol which fearlessly proclaimed the truth of the dharma.

In addition to Buddha’s throat, the conch also appears as an auspicious mark on the soles, palms, limbs, breast or forehead of a divinely endowed being.

The Lotus Flower Meaning and Tattoo

The lotus flower represents the purity of body, mind, and spirit.

In Buddhist art, the lotus is often depicted with 8 petals symbolizing the Eightfold Path, a core tenet of the Buddhist religion.

The lotus flower to indicate that there’s beauty in every horrible place. The best lotus flower can grow in the dirtiest mud!

The Victory banner meaning and Tattoo

the victory banner signifies Buddha’s enlightenment through his conquering of passion, pride, lust, and the fear of death.

These four pitfalls are known as the ‘four maras’, and are considered by Buddhists to be the hindrances we face on our spiritual journey. Liberation, or the state of nirvana, can only be realized when the battle over the four maras is won.

The victory banner reminds of when Buddha won the battle to Mara who stands for the sins.

The Vase Meaning and Tattoo

The Treasure Vase – known also as the ‘wealth vase’ – and ‘vase of inexhaustible treasure’ – became the Buddhist symbol of spiritual abundance.

As one of the Eight Auspicious Symbols of Buddhism, it represents not only the wealth of Buddha’s teaching but his never-diminishing generosity and compassion. Legend attributes to it a special quality, that of always remaining full despite much being taken from it.

The pot to fill it after illumination with positive stuff only.

The Dharma Wheel meaning and Tattoo

The wheel of Dharma, Dharmachakra represents the eightfold path. It is the most popular and one of the richest Buddhist symbols that appear in blackwork tattoos.

The Endless Knot Meaning and Tattoo

The Endless Knot is one of the Eight Auspicious Symbols in Buddhism, and one of the most popular symbols in Tibetan Buddhism.

Also referred to as the ‘Mystic Dragon’, it symbolizes the infinite wisdom and compassion of the Buddha for all sentient beings.

The endless knot to show the interconnection and rebirth of everything in life.

Yantra tattooing is a form of tattooing originally introduced by Khmer people of the Khmer Empire which influenced much of its culture in the region during its reign.

It consists of sacred geometrical, animal and deity designs accompanied by Pali phrases that offer power, protection, fortune, charisma and other benefits for the bearer.

These days, it remains popular in Cambodia, Thailand, and also in Laos and Myanmar (Burma). Sak means tattoo in Thai and Khmer, while yan and yoan are the Thai and Khmer pronunciation for the Sanskrit word yantra respectively, a type of mystical diagram used in Dharmic religions.

Buddhism is one of the largest religion in the world which attracts millions of followers and have a great influence over the millions of people.

The Buddhist tattoos can be directly linked to the origins of this religion and although Buddha himself discouraged any form of symbols in the religion they still came to be.

Buddhist Tatto art is a special kind of art which was originated from southeast Asia. The Buddhist Tattoo Art is believed to be something holy, magical and religious.

There are different Buddhist goddess whose tattoo is popular in young generation of tattoo lover. The list of the Buddhist goddess is all the manifestation of 21s Taras including red tara, white tara, green tara etc.

It is believed that the tattoo of Buddha and other deities are symbols of good luck. Buddhism is followed by many people in the world apart from being a religion, Buddha and Buddhism have become one of the most popular subjects in tattooing.

This tattoo design shows Buddha and an Eastern dragon which signifies good fortune, fertility, and protector of life.

There is Buddhist Tattoo that is the Sacred tattoo that is very famous in Thailand sits fine on the back of this believer.

Laughing Buddha is well known as the founder of good luck and abundance in one’s life.

Another interpretation of Buddha is the jovial-looking pot-bellied Buddha as known in the Chinese folklore.

He is Buddha of abundance and happiness.

Laughing Buddha while raising both hands Meaning and Tattoo

If anything is not going well then this tattoo of Laughing Buddha can bring good fortune and happiness in one’s life.

This design option is suitable for those who are looking for the light-hearted version of Buddha, rather than the spiritual one. 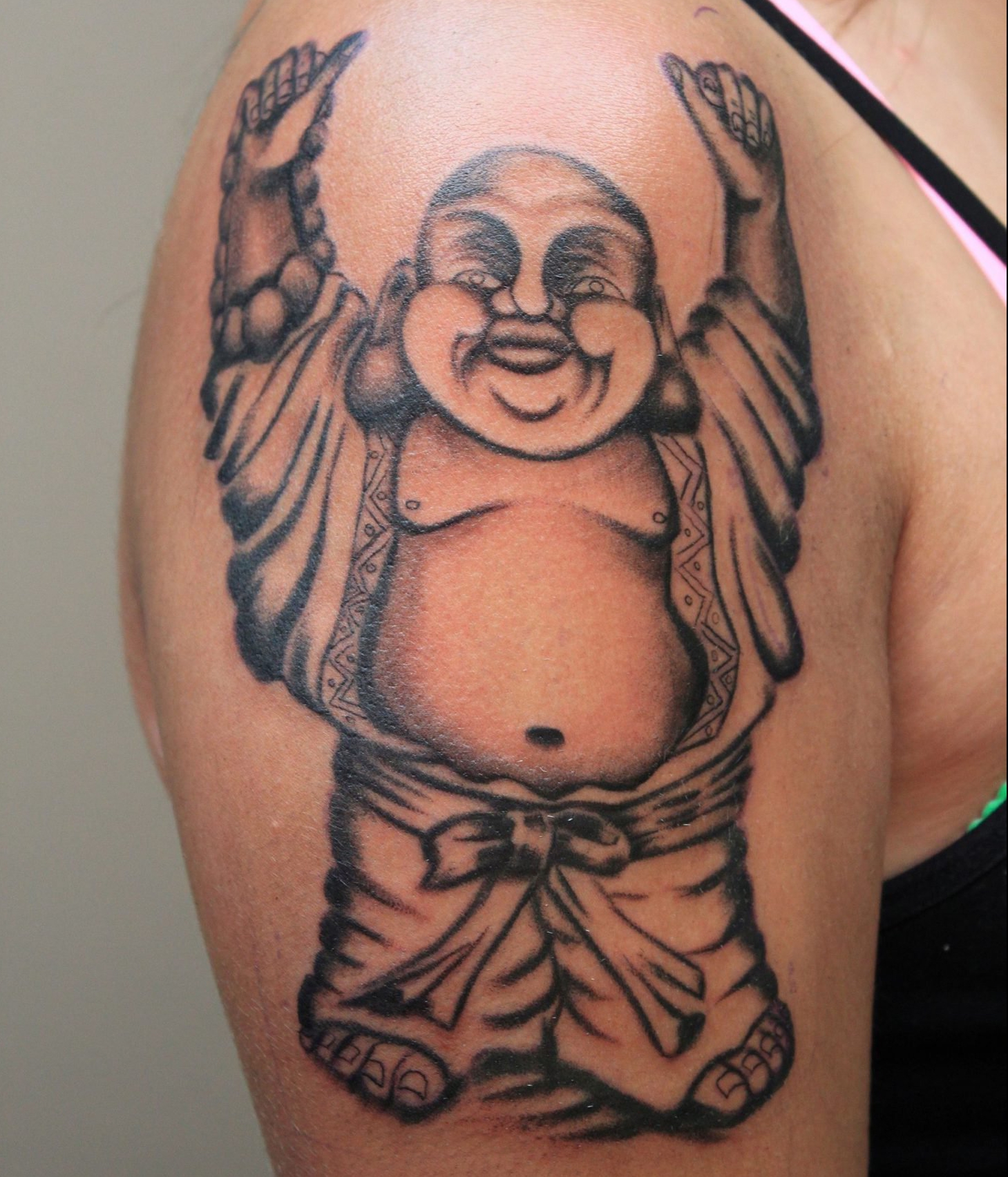 Laughing Buddha with a sack or bag Meaning and Tattoo

Laughing Buddha with the sack means he collects people’s sadness and woes and puts them in his sack. While another version of Buddha carrying sack is said to be lucky. It brings wealth and Prosperity.

It is ideally done on the stomach, with its belly button corresponding with that of the bearer, creating an absolute visual delight.

Laughing Buddha with an object in hand Meaning and Tattoo

Laughing Buddha with fan symbolizes happiness and joy. It also eliminates all problems and sorrows.

One can also have the face tattoo of the laughing Buddha inked on the other parts of the body, such as the arm, shoulder, side, chest, leg or wrist.

If you are suffering from an unstable health condition then keeping this Laughing Buddha in the house or Tattooing it will help to keep calm the mind.

Laughing Buddha sitting on the boat Meaning and Tattoo

This kind of Laughing Buddha will help to overcome all the obstacles.