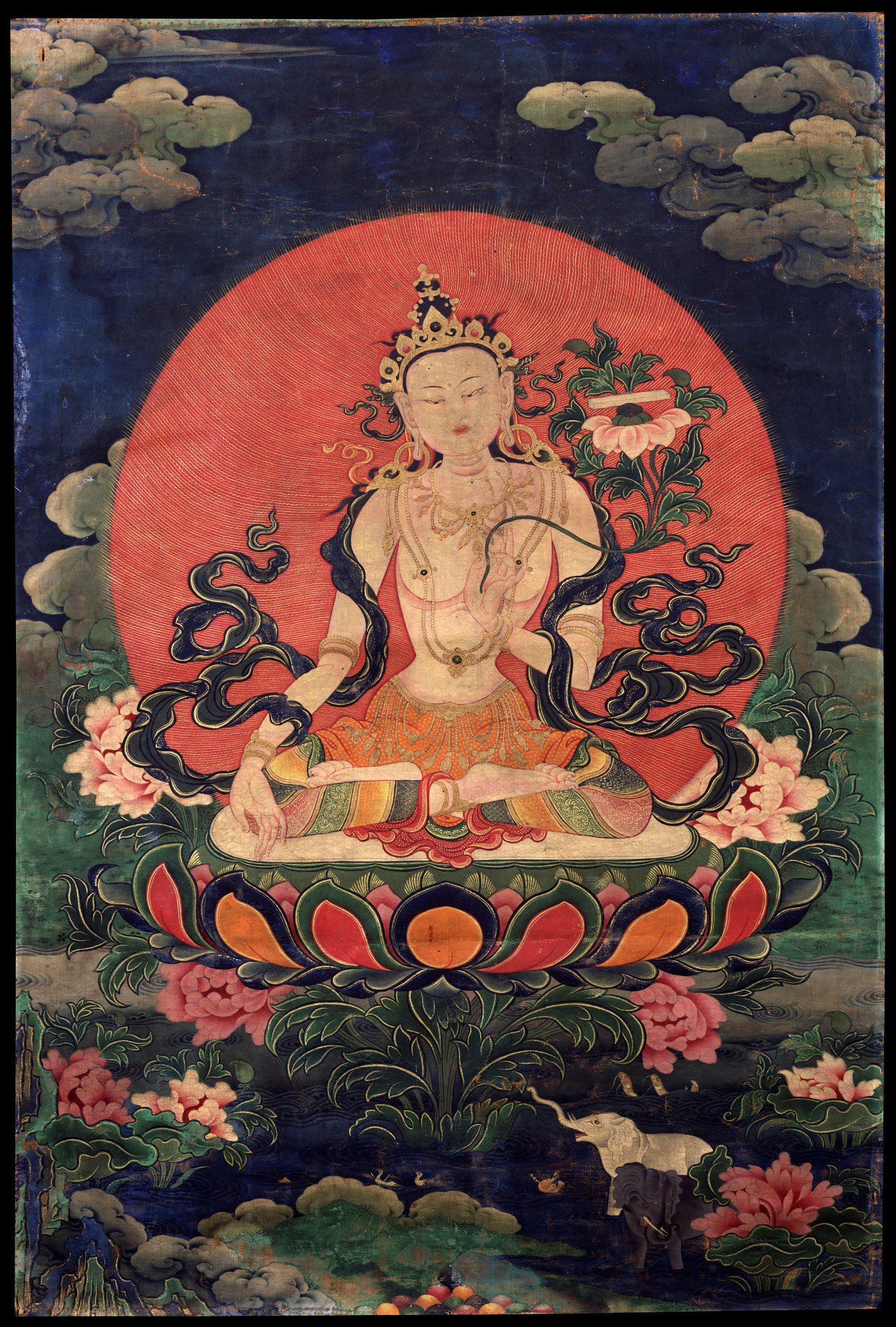 White Manjushri is the bodhisattva of wisdom, from the Siddhaikavira Tantra in the tradition of Mati Panchen. An ocean of nectar, white and cool, with many elephants, geese, and waterfowl sporting and playing, calling out with sweet sounds, in the middle of that a lotus with a stem, branches, leaves, fruit and a marvelous sweet fragrance. Above a moon disc seat with cool rays of light shining forth to the ten directions.

The Life of White Manjushri

In this portion, we are going to learn about the life of white Manjushri, after that, we will learn the short etymological description of the word White Manjushri itself.

Iconograhy of the White Manjushri

In the iconography of the White Manjushri, We are going to learn about his body posture, hand and leg gesture, and different representations of White Manjushri in thangka and statue.

White Manjushri is beautiful, youthful, and calm in expression. He is white in color. he has one face and two hands. The hair is piled on the crown of the head with some falling loose across the shoulders.

The right hand is extended forward atop the knee performing the mudra of generosity with the palm facing outward. At the heart, delicately held between the fingers of the left hand, a green lotus stem rises above the left shoulder supporting a pink blossom topped with the Prajnaparamita sutra.

A gold and jewel crown, hair ribbons, earrings, necklaces, bracelets, and anklets beautifully adorn the body. Draped across the shoulders a blue scarf twist around the arms and unfurls at both sides.

The lower body is covered with a short orange skirt and beneath that a long skirt of rainbow colors. With the legs folded in vajra posture, right over left, above a moon disc and multi-colored lotus blossom seat rising from a blue lotus pond he sits surrounded by a circle of radiant red light.

In the lotus pond below two elephants, white and grey, sport in the water amongst pink blossoms and waterfowl. Along the green earthen bank piles of heaped jewels display an array of color while the deep azure blue sky above is decorated with billowing clouds in shades of white, green, and blue.

The right hand is in the mudra of supreme generosity. The left holds a blue lotus to the heart, blossoming at the left shoulder and marked with the Prajnaparamita book. Seated firmly with the feet in vajra posture, with the major marks and blazing with light, adorned with various jewel ornaments, and wearing white silks.

We will learn about the prajnaparamita.

It means “the Perfection of Wisdom” in Mahayana Buddhism. Prajnaparamita refers to this perfected way of seeing the nature of reality, as well as to a particular body of sutras and to the personification of the concept in the Bodhisattva known as the “Great Mother”. The word Prajnaparamita combines the Sanskrit words prajna “wisdom” with” paramita” perfection”.

Prajnaparamita is a central concept in Mahayana Buddhism and is generally associated with the doctrine of emptiness or ‘lack of Svabhava’ and the works of Nagarjuna. Its practice and understanding are taken to be indispensable elements of the Bodhisattva path.

We are going to learn about Manjushri’s peaceful and wrathful deity.

The Siddhaikavira Tantra was first translated into Tibetan in the 11th century at the time of Lord Atisha and is classified as a Kriya Tantra. It describes numerous forms of Manjushri along with a host of other deities both peaceful and wrathful: Sarasvati, Jambhala, Vasudhara, Achala, etc.

We will learn about the list and the description of the lineages of White Manjushri.

The lineage of Teachers of Manjushri

Manjushri is a bodhisattva associated with prajna (insight) in Mahayana Buddhism. In Tibetan Buddhism, he is also a yidam. His name means “Gentle Glory” in Sanskrit.

Indian Pandits Engaged in Tibetan Translations of Buddhist Logic  Acharya Jetari is the author of this book. The Buddhist logic had been manifested as a consequence of the writings of Dharma Kirti in the 7lh century and reappearing later.

Shakya Shri Bhadra, whose immense learning was incomparable even in India, who was head of the famed dharma universities of Vikramashila and Nalanda, and who was continually blessed with visions of the mother of the buddhas, Arya Tara, was the last of the great Indian pandits to visit Tibet.

He is somehow less well­known to  Westerners than his two predecessors, perhaps because, unlike them, he did not compose a major text of his own; yet his impact was immense.

Devashri means something in Hinduism, Sanskrit. If you want to know the exact meaning, history, etymology, or English translation of this term then check out the descriptions on this page. Add your comment or reference to a book if you want to contribute to this summary article.

Sharchen Yeshe Gyeltsen was born in 1359, most probably at Sakya Monastery, as the son of Lama Dampa Sharchen Rinchen Gyeltsen Pelzangpo and Machik Deden Bum.

Ngorchen Kunga Zangpo was born in 1382 at Sakya Monastery in Tibet. His mother was Sonam Pelden. The identity of his father is somewhat complicated.

According to the biography written by his chief disciple, Muchen Konchok Gyeltsen, Ngorchen’s father was Pontsang Drubpa Yonten, the “great attendant” of the Sakya Tsok, which was most likely a special section of the Sakya general assembly.

Ngorchen Kunga Zangpo was one of the most influential of all Sakyapa masters and is credited with founding the Ngor subschool. 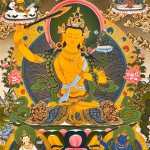