Dorje Legpa is an Oathbound worldly protector of the Nyingma School. Dorje Legpa is known as the guardian of the Revealed Treasure Tradition.

The Esse of Dorje Legpa

In this portion, we are going to talk about the life of Dorje Legpa. Finally, we will grab a short etymological description of the word  Dorje Legpa itself.

Iconography of the Dorje Legpa

In the iconography of the Dorje Legpa, we will learn about body posture, hand and leg gesture, and different representations about Dorje Legpa in thangkas and stupas.

Above a lotus and sun and a gelded goat or a white radiant lion is the excellent Dorje Legpa lies who is maroon in color and has one face, two hands, three eyes.

The face of Dorje Legpa is radiant with bared fangs, exhaling a poisonous breath with red hair and mustache flowing upward.

The right-hand of the Dorje Legpa holds a vajra striking the heads of enemies and the left a human heart.

Dorje Legpa has yellow hair flowing upward like a flame.

The first hand of Dorje Legpa extended to the right holds a gold vajra and the left a human heart held up to the mouth.

Dorje Legpa is resting against the shoulder is a red flag hoisted on a long staff.

Dorje Legpa is adorned with gold earrings, necklaces and bracelets he wears a hat, round in shape and red, crowned with a half vajra.

He is Attired in long flowing garments and boots, his body is well covered.

He is seated atop a snow lion pressing down on a red corpse and sun disc above a lotus seat. The snow lion head is turned upward to show respect for the master.

He is surrounded by thick black smoke and the flames of pristine awareness.

At the edge of the flames are numerous wild animals, birds, and beasts.

The Thangka of Dorje Legpa is from  Tibet. It was made in between 1700 AD to 1799 AD. It is from Nyingma Lineage. The base of the painting is cotton, ground mineral pigment, fine gold line are used to make the painting. Presently this painting is in the Rubin Museum of Art.

Haygriva is on the left side of Dorje Legpa. Haygriva is red in color with one face topped by a green horse head and two hands holding a stick topped with a human skull (barely legible) in the right and a lasso on the left. Haygriva is standing surrounded by flames.

Vajrapani is holding a vajra in the right hand and performing a wrathful gesture with the left. Vajrapani is in a similar appearance.

Damchen Garwai Nagpo is known as the main attendant to Dorje Legpa who is blue in color with one face and two hands holding in the upraised right a vajra hammer and in the left a blacksmith’s bellows made of tiger skin.

Damchen Garwai Nagpo rides on the back of a brown billy goat with the horns entwined.

Dorje Yudronma is well attired in long robes holding in the right hand a mirror held aloft. In the left-hand is a long-life arrow with streamers.

Damchen Nordrup Dorje Legpa is holding upraised in the right hand a vajra hook and in the left a mongoose.

The consort holds aloft in the left hand a long-life arrow with a white ribbon and a gold mirror with a red ribbon in the right.

Both are richly attired in various peaceful garments and jewel ornaments. At the left of the thangka, there are five wrathful figures each with one face and two hands, riding on mounts of bird, goat, donkey, horse, and lion.

Six figures riding similar wild mounts are at the right of the thangka. They are one red female in a standing posture at the lower right.

Uyug Shang is at the blazing iron fortress.  Uyug Shang is the powerful son from the union with a Mu daemon and great in magical emanations.

Uyug Shang is performing attentively the commands of Bhagavan Vajrapani and an homage to the herald of liberation.

Indigenous to Tibet the daemon Dorje Legpa was subjugated in the 8th century by Guru Padmasambhava and oath-bound as a Dharma protector.

His primary function is to safeguard the Revealed Treasure texts (Terma) of the Nyingma Tradition of Tibetan Buddhism. The style of the thangka is called ‘nag tang’ – black scroll. 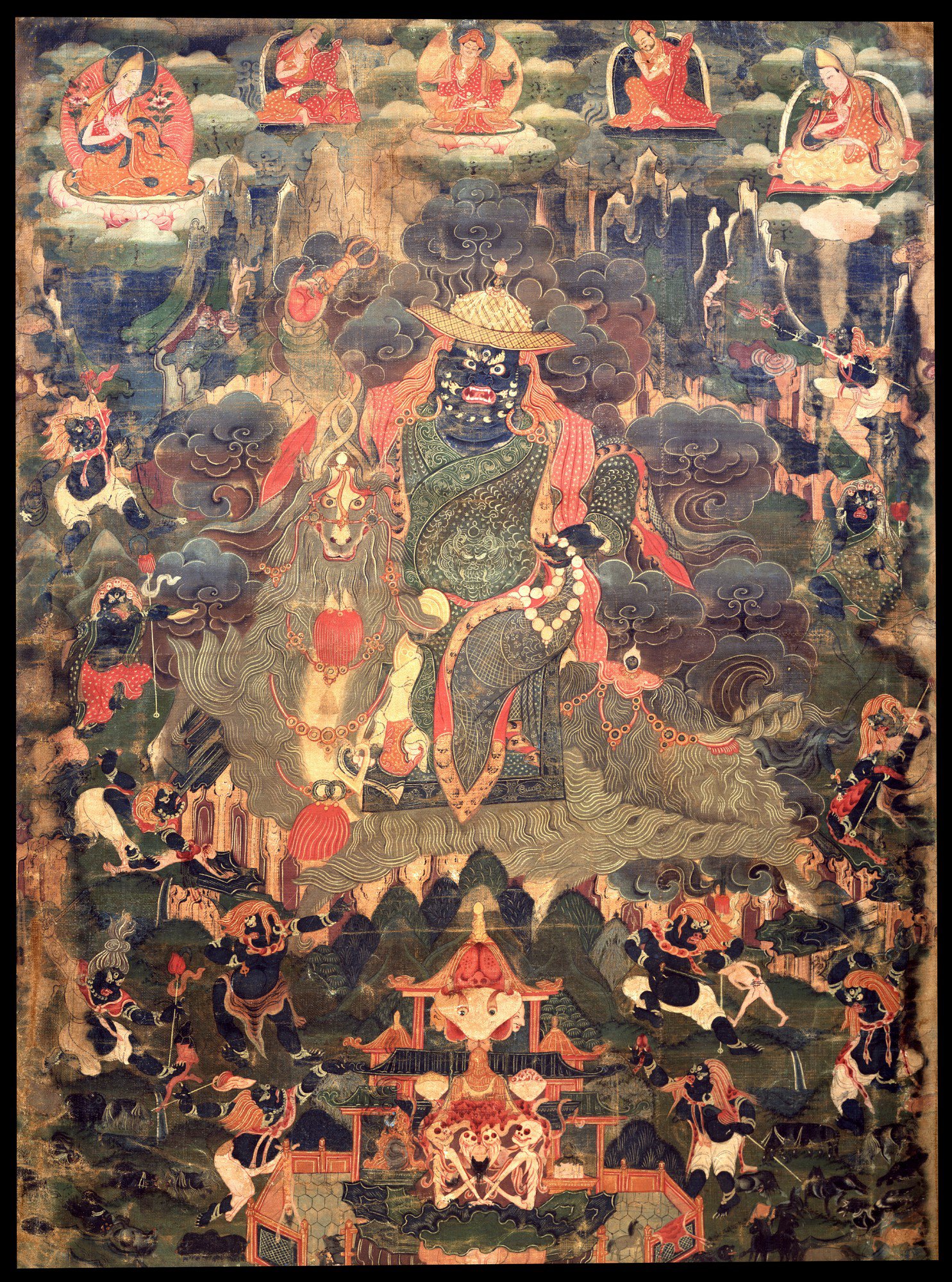 Dorje Legpa is dark blue and wrathful in appearance with one face and two hands. He holds aloft a gold vajra in the right hand. The left placed at the side holds a white bead mala.

Atop the head is a broad-rimmed gold monastic riding hat.

He is wearing long flowing robes. He is seated atop a light brown goat with twisted horns. He is surrounded by numerous dark blue attendant figures.

At the top center is a figure similar in appearance to Padmasambhava. Four Gelugpa lamas wearing monastic robes and hats sit to the right and left.

At the top center of the thangka, there is a figure similar in appearance to Padmasambhava.

And there is  Four Gelugpa lamas wearing monastic robes and yellow Pandita hats sit at the right and left sides.

The thangka of the daemon Dorje Legpa was subjugated in the 8th century by Guru Padmasambhava and oath-bound as a Dharma protector.

His primary function is to safeguard the Nyingma Tradition of Tibetan Buddhism.