Detail Walk Into The Wheel of Life 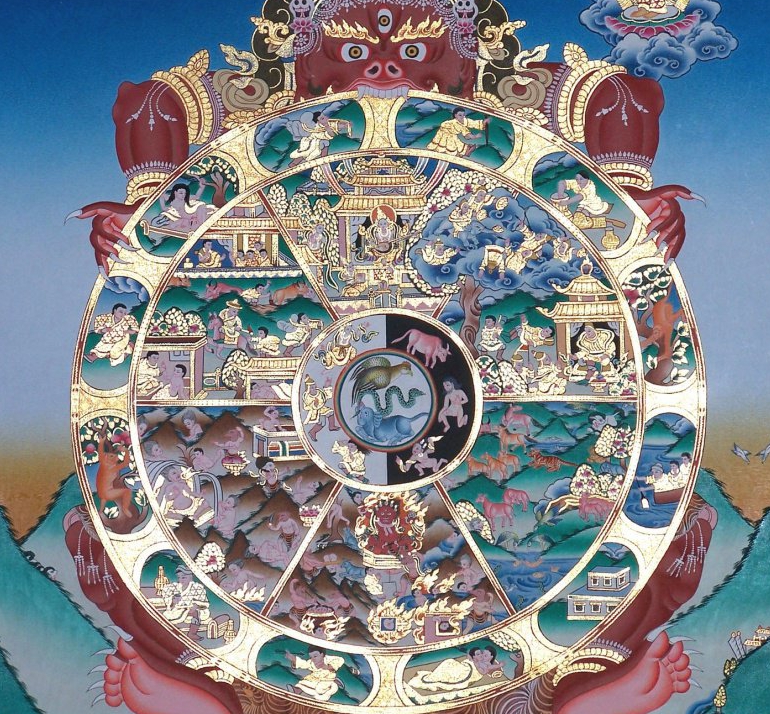 Detail Walk Into The Wheel of Life

A very unique of its kind, Bhavachakra Mandala or The Wheel of Life is seen almost everywhere when you walk inside any Buddhist monastery or Stupas. It is also one of the powerful tools for meditation. It is often used by the practitioners of Buddhism to understand the life of Buddha. The wheel is a wonderful representation of Buddhism and the consciousness. The wheel of life is supported by the wrathful deity Yama, god of death.

Wheel of life is essentially a mandala with concentric circles. The centre of the painting contains the three animals symbolizing three Poisons”: ignorance (the pig), attachment (the bird) and anger (the snake). The pig is seen emitting snake and bird out of its mouth. It probably means:

anger and attachment is a result of ignorance

they both (bird and snake) pulling pigs tail promote even greater ignorance.

The next circle to the centre is divided into two halves of black and white. It describes the Karma, the law of cause and effect. The darker potion represents the result of negative mind and thoughts whereas the lighter portion represents the positive thoughts and the good karma out of your actions.

After this, there is another circle divided into six parts portraying a different realm of the existence. Let’s walk into each realm of the wheel of life so as to get a clear picture from suffering to the enlightenment.

This is about the normal human life we have been living. It is the combination of both suffering and happiness. Opposite values are contradictory to each other, similarly, pleasure and pain make us realise about both aspects of life. Buddism says that such balance of pleasure and pain helps us to attain the spiritual experience. The Human Realm is considered to be most suitable for practising the Dharma.

The beings in this realm are believed to be jealous and unsatisfied with what they possess. They keep fighting with themselves and blaming the divine. As a result, they fight from constant fight and greed.

The Realm of the Gods

In this Realm, gods are portrayed as human beings. God is supposed to share the similar sensuous experience as a human being do. The god enjoys full living in pleasure without practising the dharma. Because of this god deteriorate their good karma and as a result gets reborn in the lower realm.

This is the realm of the extreme suffering. The victims experience the most terrible tortures typically by the demons. In Buddhism, there is specially eighteen hell realm.

This realm is the result of suffering from the extreme and constant hunger and thirst. They wander and move from one place to another in search of basic things like food and water.

It is the self-preservation realm. Animals continually suffer and fear from being attacked and eaten by other animals. They don’t feel the connection with the similar being also.