Types of Thangka Found in Nepal

Types of Thangka Found in Nepal

Thangkas are basically sacred Buddhist Thangka paintings. “Thangka is a type of painting executed on the cotton cloth and often framed with brocade Tibetan silk. They are images of different gods, goddesses, and significant related to the philosophy of Buddhism. Regarded as the very essence of worship, these paintings are a means by which the highest ideals of Buddhism are discussed. However, many Buddhist monasteries still use the tables as a means of financial and spiritual support. They use color from natural stone and gold paint to create the beautiful spiritual thangka paintings. 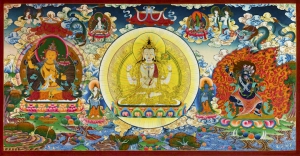 In Tibetan Thangka paintings Thangkas ways that can be rolled up and scroll, painted, embroidered and can be made of mosaic. The form taken by Thangka is a vertical rectangular in shape. First framed by textile generally borders (red and yellow) in color and often mounted on the continued Chinese and Nepalese brocade. Thangkas Tibetans have very define symphony perform a degree of opportunity in glossy and shiny natural pigment. The departure of Tibetan Thangka could be followed in the 18th century. The Tibetan Thangkas can be submitted either types or icons, Mandala, Buddha and Bodhisattvas, guardians and Yidams and Thangka Bardo. Each Thangka is regarded as a meditation, bringing the importance not only to model and artist but to all human beings. The arts often spoke for specific reasons, more often than not a visual Supplication to a deity. 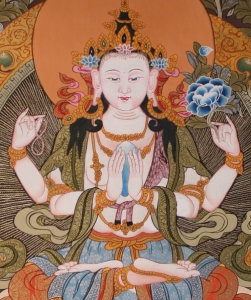 Newar Thangka recent morals have always made up a majority of the population of Nepal’s Kathmandu Valley. Newari arts have a great influence on the development of Tibetan paintings. The arts have flourished later, the 15th and 16th century. Tibetan dependence Newar in the style of painting was eventually replaced by the typical Tibetan style. The existence of the assimilation constant, the adoption of new ideas in a cultural dynamics led to two developments in Tibetan paintings from the 15th century based on Newar Indo-Chinese and first elements. Newari art has enormous influence evident in the model of Tibetan painting.

Wheel of Life is a detailed representation of the basic Buddhist belief in the transmigratory existence or the theory of rebirth. The wheel is held in the embrace of Shenje, ruler of the dead, showing that all beings must eventually die. It is said to symbolize the people of the fear of death and hideousness to cling to life. Outside the wheel is a figure of Buddha, which is free of all moral and mental barriers that may prevent all living beings to attain enlightenment. His presence outside the wheel implies his escape life cycle. The wheel is divided into three parts: the axle, spokes and the rim. The axle affirms the first noble truth of Buddhism which holds that suffering exists; the purpose of the Mahayana Buddhist teaching is to relieve all beings from suffering. The axle outside, or rim, the event shows a white sky and a black hell. The spokes of the wheel divide the world into six areas sensual, the gods, demigods, men, hungry ghosts, animals, and hell.

Mandala (which literally means a circle) is a system of meditation, often used in meditation. It can be used as a visual aid for concentration and meditation introvertive leading to the development of intuition and the activation of forces that led to “Siddi…” The Mandala is a graphic representation of this process. It is a practical instrument for the realization of the process itself. There are many types and varieties of mandalas depending on the nature of divinity Central.

Life of Buddha shows the stages of the life of Buddha from birth to death. He describes his life since its conception, childhood as a young prince from Kapilvastu in Nepal (Lumbini), who is his dissatisfaction with this life who came with his understanding of the inherent human suffering, has spent his time wandering as an ascetic, his ultimate attainment of enlightenment under a Bodhi Tree, and its attempts to educate his fellow humans.

2 thoughts on “Types of Thangka Found in Nepal”