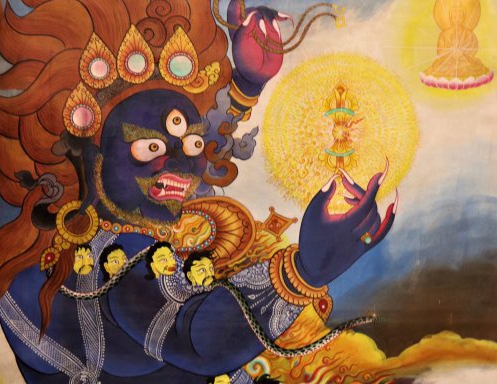 Vajrapani is the Bodhisattva who represents the energy of the enlightened mind, and his mantra also symbolizes that quality. The mantra is Om Vajrapani Hum.

In Tibet, Vajrapani is known as  Chag a dor Je. The sutra of golden light entitles him “great general of the yakshas”.

what is the meaning of vajrapani mantra?

the meaning of the Vajrapani mantra Om Vajrapani Hum is one can learn to access the boundless and fiery energy which Vajrapani emits. This mantra is simply his name, which signifies„ wielder of the thunderbolt by the mystical syllable om and hum. This powerful Mantra helps us to gain access to the irrepressible energy that the bodhisattva symbolizes.

By repeating this mantra we can gain an access to the type of irrepressible energy that is symbolized by Vajrapani. Think of it as a means of tapping into his endless energy in order to receive strength, guidance, and to eliminate our suffering. The mantra has an upbeat and energetic feel to it, which is only strengthened with a greater insight into Vajrapani himself.

What are the benefits of the Vajrapani Mantra?

Vajrapani Mantra is often chanted to remove negative energy. Vajrapani transforms our fear and feelings of being powerless into action and strength.