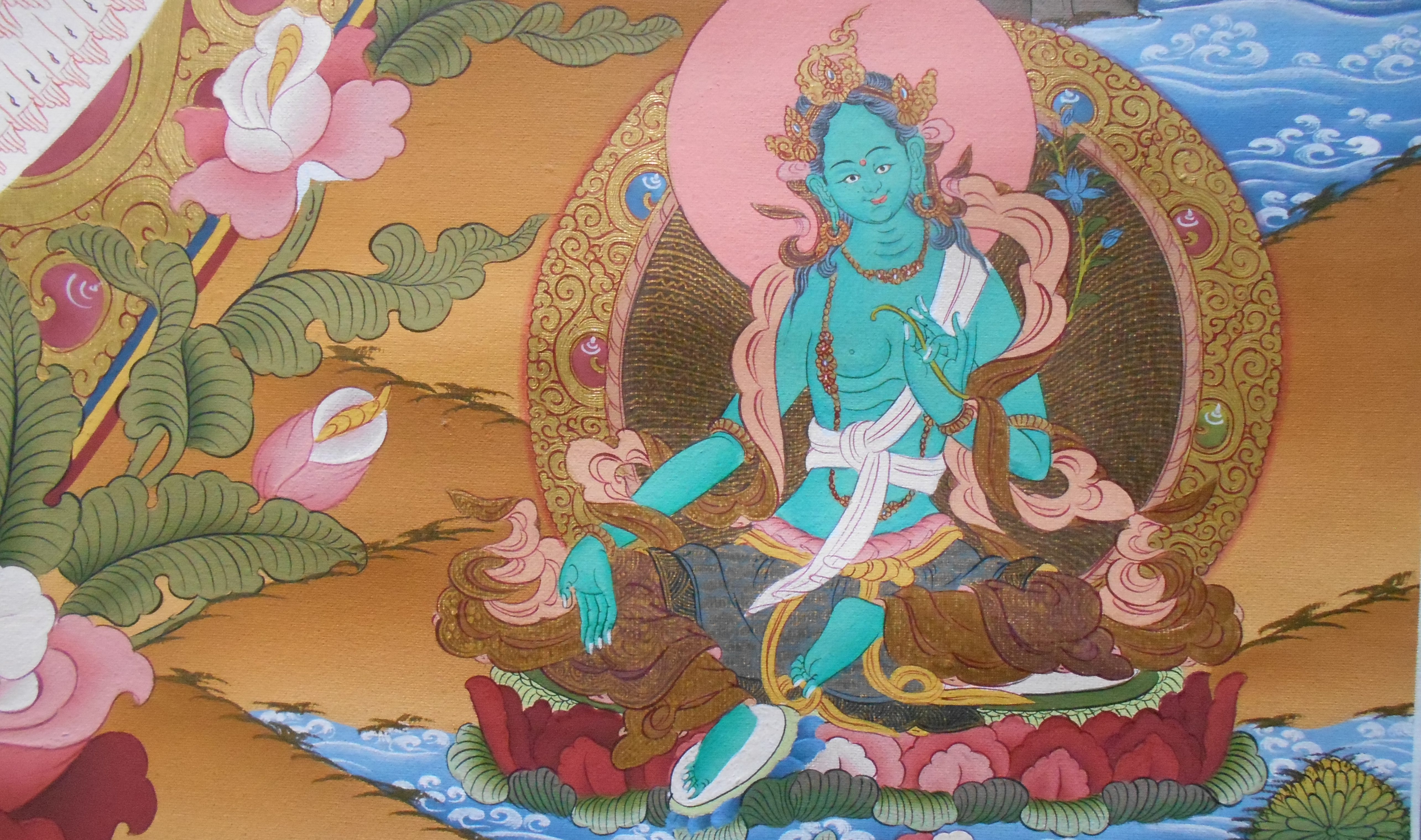 According to historical records, around the seventh or eighth century, A.D. Thangka drawings began to be made in Tibet. This approach stems from Indian storytelling, where the image from which the story was told is vertically suspended, to visually assist in the story-telling. Some Thangka paintings seem to also be influenced by Han art effects.

The vast majority of Thangka expresses various themes in Tibetan Buddhism. The manner of its display directly reflects the Buddhist ceremony, such as when closing the painting, rules must be followed to roll the scroll from the bottom up. Otherwise, any other method would be regarded as blasphemy.

For Tibetan Buddhist monks and nuns alike, Thangka is regarded as an essential tool during religious practice. Worship Thangka could earn merit while observing Thangka would evoke associations of Buddhist teachings. Similarly, at home, the faithful would invite the painter to create a Thangka for worship. Some would also personally paint and dedicate it to the monastery temple as decoration. The most spectacular can be found in monasteries during festivals and religious assemblies when monks bring out their collection of Thangka for public display as a demonstration of the glory of the great Buddha. They would also give speeches along with singing and dancing, creating an occasion of the magnificence of solemnity. Normally the Thangka used for indoor worship is generally not more than one meter in length. However, those used for public display when opened in full can completely cover one side of a mountain.

Thangka is generally 60 cm in width and 90 cm in length. The center of the frame contains a big Buddha, which is surrounded by stories depicted in a clockwise fashion around the Buddha, which serves as a focal point for each of the stories.

Because the Buddha is always situated in the center of the painting, the space surrounding it varies. The areas closest to the Buddha outline can be irregular and requires care when determining the composition of each story according to the nearby area. Tibetan artists are very skilled in dealing with this problem. Each story frame is arranged properly maximizing the surrounding space while not seeming forced or stiff. The transition from one frame to the next is natural and complementary.

Unlike modern-day comic books, Tibetan Thank lacks detailed text descriptions. Each story frame contains only a simple title as a guide while the frame itself tells the story visually. Therefore, even though the frames may be arranged as a comic book, the lack of textual description distinguishes it as having more subtlety. This lack of clarity requires the reader to possess some background knowledge in order to be able to enjoy and appreciate the stories to their fullest.

In differentiating various compositions, Thank cleverly utilizes the temple, the palace, buildings, rocks, clouds, trees, or else sharply contrasting colors to distinguish and connect the elements. Such clarity remains obvious even though the composition of each story frame varies. In many cases, these features are also used as the background environment for characters in the story, and so form their own pieces of a distinctive landscape. Through such means, the painting seemingly expands and achieves a visual, multiplier effect through the rich and diverse compositions. This is a unique aspect of Tibetan Thank paintings.

Within each composition, the stages of a story are placed side by side as a continuous process not only to indicate the role of each character but also the plot development. This artistic style can often be encountered in Tibetan Thank paintings.

Seeing the forest for the tree is another distinguishing feature of the art of  Thank. At first glance, the Buddha appears the most prominent as it takes up more than half of the painting area and is situated in the center. However, if one shifts attention to the stories, then it is not difficult to become enraptured by the magnificence of the scenes, vivid characters and harmonious colors and free-flowing forms, despite the relatively smaller sizes of the characters. At that time, the presence of the Buddha can be felt yet unseen.

The contents of the Thank paintings range widely. They include religious activities and characters from Tibetan Buddhism and story scenes while also depict the traditions and many sights of the high plateaus. To reflect such voluminous content in a scroll painting requires extraordinary skills and rich life experiences. In particular, the stories are portrayed according to history without conceptualization. The Thank artists paid the utmost attention to detail for every single aspect in the painting from the architecture of popular customs down to the weaponry and armor. Such careful composition demonstrates the artist creative skills in realistically depicting life.

In addition to composition and the artistic treatment of these characteristics, methods such as in-shading, hook lines, paint smudging are also strengths. Generally, iridescent greens are used for rocks, trees, sky and the ground. People, buildings and large areas of the Buddha are created with warm tones of yellow and red. This color contrast of warm and cool color tones not only splendidly demonstrates good coordination within the picture but also a structured yet decorative coloring effect. Artists mainly use opaque mineral pigments for coloring, such as cinnabar, stone yellow and malachite green. These pigments are enhanced for anti-corrosion ensuring the longevity of the colors. Therefore, despite the passing of time, the colors remain as fresh as ever a further testament to the artist¡cs consideration.

The artists not only pay attention to the overall effect of the picture but also focus on the detailed portrayal of each image. For instance, within each frame, the natural objects such as rocks and plants and the characters are blended using the same coloring scheme with different shades creating a layering effect.

Line drawing is the basic means of traditional painting and had once reached a high level of development. In most cases, Thank uses gold threading to outline the figures and scenery through varying the line thickness, thereby drawing focus to every part of the picture. The artists are very good at using gold and often use pink gold as the bottom layer, and then use gold to outline patterns, so as to increase the layering effect of gold shine. They have very strict quality requirements for gold, using only the purest gold personally processed to powder. In order to increase the brightness of some outline in gold, they use what is called the “cat’s eye stone¡±, repeatedly rubbing onto the surface where gold is applied. As a result, the entire picture appears rich in cultural style and can be used as an elegant decoration.

Thangka is typically a vertically long scroll through the size may vary. After the completion of the picture which is typically produced on a white cloth, the border is framed with colored cloths with the back mounted by a cloth of silk or satin. The front is decorated with two pieces of yellow silk damask with two ribbons and streamers covering the mantle, while hardwood is used to frame the top and bottom of the scroll.

To complete a Thangka painting requires a skilled artist a month of time. In addition, the Lama must give the painting his blessing. Therefore, the end product embodies both the hard work of the artist and the protection of the gods.

The Market Value of Thangka

Since 2006, Thangka has been included in the first national list of intangible cultural heritage protection. With the Tibetology, boom Thangka has also been gaining attention among collectors.

In recent times, the Ming and Qing Thangka have become a major focus of auction markets. The works of Thangka masters and many other contemporary works are also frequently sold in the tens of thousands of dollars, few have even reached tens of millions of yuan. According to insiders, from 2000 to date, the price of Thangka has nearly jumped 10 times.

According to Professor Xie Ji-sheng, with the opening and maturity of the art market, more art forms have gained exposure through the auction markets allowing Thangka to be seriously appreciated as one of the earlier art forms. How a Thangka is valued is affected by its art style and genre, the complexity of the painting, material texture, and quality. No less is the value also dependent upon the skill of the artist. A skilled artist takes about 6 to 8 months to complete a Thangka of one square meter in size, based on a daily work schedule of 6 to 8 hours. To account for the length of careful production, such a Thangka will typically sell for 30,000 RMB or higher. Therefore, a high-quality Thangka of significant size will be correspondingly valued higher.

Thangka is first and foremost a kind of religious painting, so for a good Thangka artist who worships the Buddha will go to no ends to ensure the best quality of materials used for coloring, such as grinding of pearls and corals for white and red, turquoise for green and solid gold used to make gold foils resulting in the richest coloring. It is precious because these minerals that the Thangka is known for its colors being resistant to fading even for centuries.

In addition, the Thangka until today is still mainly a form of virtuous duty by the artist for the temple, some to decorate temples, some used to form lasting bonds with people to the living Buddha. But over time the development of Thangka has come out of the scope of religion and emerged as a pure and beautiful art form.

Turning to the future of Thangka collection trends, Xie Ji-sheng said that the value of this art form will continue to rise given the increasing attention given to the Tibetan culture.