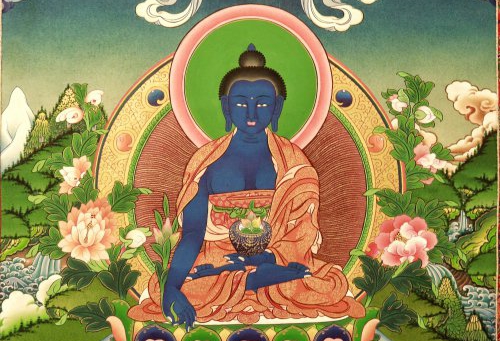 He is known as Yao Shih Fwo. Better known to the people like the Buddha of Medicine or the Master of Healing, he is dear to the hearts of many, for they have indeed received his blessings in the forms of miraculous cures from all kinds of illness.

The title ‘Master of Healing’, is a literal translation of his Sanskrit name ‘Bhaisajyaguru’, the Buddha who favors worshippers with relief from the troubles of the world. Apart from curing illness, warding such calamities as famine, drought, and plague, granting longevity and assisting the dead, Yao Shih Fwo is known to have dispensed all kinds of mundane benefits to those who pray to him.

The Buddha’s efficacy in preventing calamities and granting prosperity besides curing illness has attracted a steady number of believers and devotees since the time of the Eastern Chin Dynasty (317–420) to the present day.

The Sutra of the Buddha of Medicine (Bhaisajyaraja Sutra) was also translated into Chinese at that period of time which provided a full account on the peerless Buddha, his Paradise, and his Twelve Great Vows.

However, the later translation made by Tripitaka Master Hsuan Tsang, the famous monk of the Tang Dynasty, known as the Sutra of the Master of Healing (BhaisajyaguruVaidurya-Prabhasa Tathagata), is the more popular Sutra which is widely read by most people today.

Bhaisajyaguru and other Bodhisattvas

Despite his great popularity, temples dedicated to him are very scarce so that those who wish to worship him may do so at temples where his images can be found. He is often found in a triad with Sakyamuni Buddha and Amitabha Buddha, and his symbols are either the medicine bowl or the pagoda. When depicted alone, he holds his symbol with his left hand and he is normally attended to by his prominent disciples, the Great Bodhisattvas ‘Radiance of the Sun’ and the ‘Radiance of the Moon’.

Sutra of the Master of Healing Sakyamuni Buddha

In the Sutra of the Master of Healing Sakyamuni Buddha described Yao Shih Fwo to Manjusri Bodhisattva thus:

“Eastward from here, beyond Buddha-land about ten times as numerous as the sands of the Ganga, there is a world called ‘The Pure Crystal Realm’, the Paradise of Yao Shih. Its Buddha has a few titles, such as the Master of Healing, Azure Radiance Tathagata, the Arhat of Perfect Knowledge, the Perfect Mind and Deed, the Well Departed Sugata, the Knower of the World, the Peerless Nobleman, the Man Who Brings the Passion of Men Under Control, the Teacher of Devas and Men”.

While still a bodhisattva, he made Twelve Great Vows to free living beings from the bondage of karma. He vowed to guard their progress towards enlightenment, to help them keep their precepts, to free them from the snares of wrong religious practices and false doctrines, to provide food and drink for the hungry, to restore the bodies of the deformed, to rescue those facing execution and to lead them to a happy and tranquil life. The full text of the Twelve Vows cannot be given fully here but the seventh Vow, which specifically pledges to relieve man of physical illness and to dispel his spiritual confusion earned him the title of ‘Physician of Soul’, runs like this:

“I vow that after my reincarnation and having attained Perfect Enlightenment, those who are tormented by diseases, who have nobody to whom they can seek help, without a refuge, without a doctor, without medicine, without relatives, without a home; these poor and Miserables beings shall all of them be free from diseases and pains, and shall enjoy perfect health of the body and mind, once my name reaches their ears. They shall have families, friends, and properties a-plenty, and shall all be brought to the Supreme Enlightenment of Buddha.”

Through the perfection of these Great Vows, the bodhisattva has attained Buddhahood and thus became known as Yao Shih Fwo, the Buddha who is able to bestow all kinds of benefits to those who have faith in him?

In the same Sutra, the Buddha Sakyamuni also revealed to Manjusri that:

“A woman may suffer from great pain while giving birth. If she can wholeheartedly worship the Buddha of Medicine and to invoke the name Tathagata, worship Him, and make offerings to Him, all pain will vanish, the newly born will have a sound and healthy body; whoever sees him will rejoice at his being so clever, so strong and healthy; and no demon comes to rob him of his vitality.

The original name of this healing mantra is Bhaisajyaguru Vaidurya Prabharaja. Bhaisajyaguruvaiḍuryaprabharaja Sutra (Medicine Buddha mantra Tibetan script) was found in Gilgit, Pakistan, and Afghanistan, dated before the 7th century.

By recruiting the mantra of Medicine Buddha, it helps to generate good karma for the future. To do so you need only to cherish the name of this World-honoured  Master of Healing whole-heartedly and without a doubt. Daily you should contemplate on his vows or his form, recite his name and make offerings to him with what you can.

Through this devotion, you will easily learn to practice compassion and loving kindness to those who are unfortunate, ill, lost, hungry or are in pain and distress. It will also lead you to pray and wish happiness on all sentient beings.

The prayer which comes out from your heart that is ladened with feelings of concern for others’ well-being is, of course, the best that you can offer to the Buddha, but here is the

Universal Prayer which is on the lips of many

In the Sutra of the Master of Healing the Buddha also revealed to Manjusri the great Dharani (mystical formula) which one should recite for the purpose of delivering beings from their diseases and miseries:

Regarding the efficacy of this great prayer the Buddha said:

“Manjusri, if you see a pious man or woman who suffers from a disease, you shall do the following wholeheartedly for these people: let them keep clean by taking frequent baths and rinse their mouths, give them food, medicine and clean water, and recite the Dharani for a hundred and eight times, then all diseases will disappear entirely. If one should have a particular wish, he should concentrate and recite the magical formula. Then he will fulfill all he wishes, he will be without disease and will live longer. After his death, he will be born in paradise without having to return to this world, and will, in the end,    attain perfect Enlightenment”.

May the many sentient beings who are sick, Quickly be freed from sickness. And may all the sicknesses of beings Never arise again.

The Power of Mantra

In other words, it doesn’t depend on whether or not you recite it correctly according to Sanskrit. Most Tibetans don’t learn Sanskrit; in Tibet, they recite mantras in their own way. The power comes from having strong faith in the mantra and its benefits.

Power of mantra comes from faith, not from how you recite it

The story of the old woman who was able to cook stones by reciting the deity Chunda’s mantra. The mantra is actually om chale chule chunde svaha, but she recited om bale bule bunde svaha.

One day her son, a monk living in thirty-six vows, came home and heard his mother reciting om bale bule bunde svaha. He corrected her, and she then changed to reciting om chale chule chunde svaha.

This mantra is used when there’s a famine; you recite this mantra and are then able to cook and eat stones. She was able to cook the stones with the mantra she used before, om bale bule bunde svaha, but when she changed to the correct mantra, the stones didn’t cook.

When the correct mantra didn’t work, she changed back to the incorrect one, which again worked.

The power of mantra comes from faith, not from how you recite it. Because they don’t know Sanskrit, many Tibetans recite mantras in a way that is not correct according to the Sanskrit.

Representation of Medicine Buddha in Thangka and Mandala 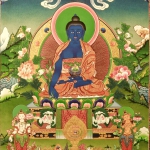 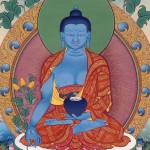 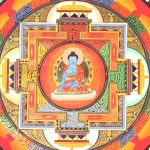 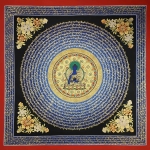 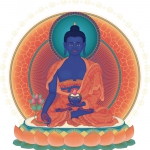 Traditionally Medicine Buddha is in the center of the Mandala and Thangka. It is believed that Bhaisajyaguru, the Medicine Buddha, indirectly teaches the science of healing to his followers.

In thangka of Medicine Buddha, the deities in the upper section are representations of the lineage of medical teachings, including Green Tara, White Tara, and Shakyamuni Buddha.

He is sitting upon a lotus and moon disc. His body is green in color and the green light indicates the connection between environmental activism and Buddhist practice exists. He is surrounded by layers of mantras.

His right hand, in the gesture of granting sublime realizations, rests on his right knee and holds the stem of an aura plant between his thumb and index finger.

His left hand, in the gesture of concentration, holds a lapis lazuli bowl filled with medicinal nectar. He is seated in the vajra posture. 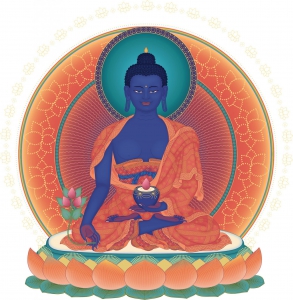 According to Lama Zopa Rinpoche 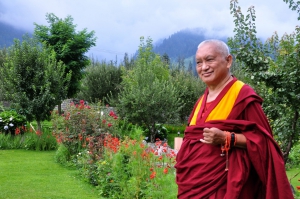 “If you can recite Bhaisajyaguru mantra as much as you can every day (good to do at least 5 malas), this will purify negative karma and will help you never to be reborn in the lower realms.”

Lama Zopa Rinpoche also stated – ”Besides the benefits you receive from reciting this medicine mantra, also these are the benefits just from hearing the mantra. Thus, this mantra is much more precious than the whole sky full of diamonds and infinite jewels. With this healing mantra, you can liberate numberless sentient beings from oceans of suffering and bring them to enlightenment.

Therefore, again, reciting even one mantra or hearing just once this mantra is much more precious than the sky filled with diamonds, gold, wish-fulfilling jewels and zillions and zillions of dollars.”