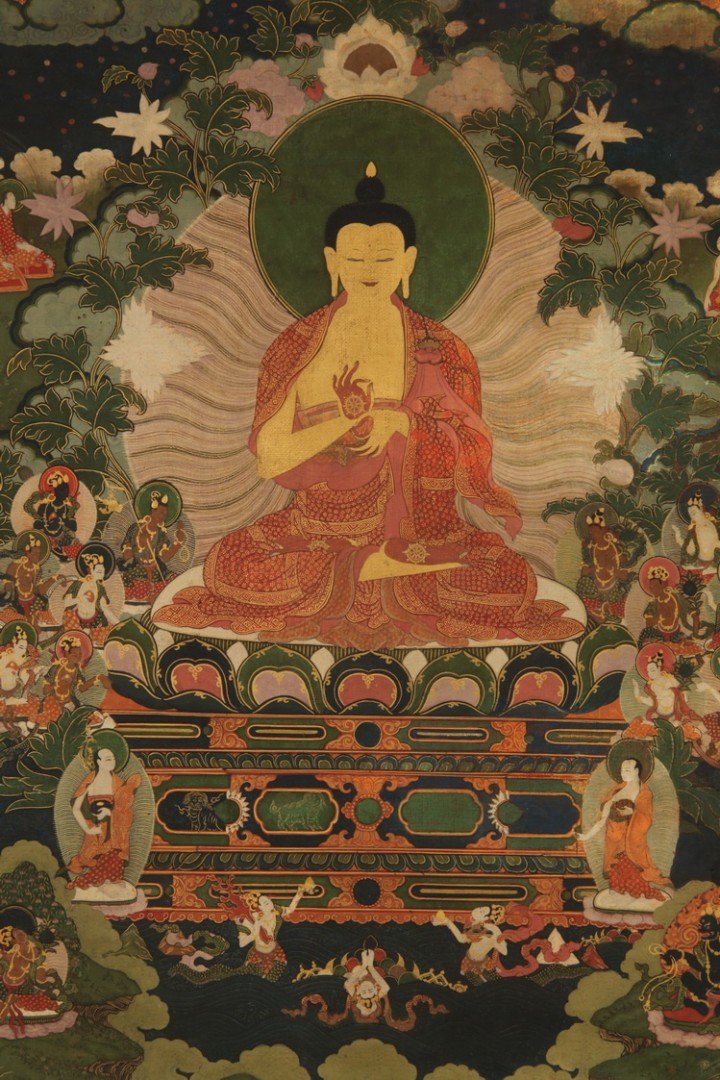 Dipamkara is known as the Buddha of the Previous Age, or the age prior to the time of the historical Buddha Shakyamuni who lived during the sixth century BCE.

Dipamkara is often remembered as the buddha who predicted Shakyamuni’s future enlightenment.

The Viability of the Dipamkara Buddha

Etymology of the Dipamkara Buddha

Diipamkara Buddha is known as the previous Buddha prior to the age of Shakyamuni. And laterDipamkaea Buddha is to be followed by Maitreya.

Dipamkara Buddha is known as mar me mzad in Tibet.

Iconography of the Dipamkara Buddha

The Dipamkara Buddha has his hands in the teaching gesture imitating an eight-spoked wheel which he also has decorating the palms of the hands and feet.

With the legs in vajra posture, Dipamkara Buddha sits atop a multi-colored lotus seat and square throne.

There are two attendant monks stand at the sides of the throne above a lotus pond of Dipamkara Buddha.

In the pond of Dipamkara Buddha, there are three naga figures holding upraised precious wish-fulfilling gems.

The thangka of the Dipamkara Buddha is from China. It is made between 17 AD to 1799  AD. He is from Gelug and Buddhist lineage.

The base of the painting is ground mineral pigment on cotton.

In depicting this thangka, we will learn about Sixteen Bodhisattva Figures, Ushnisha, and finally Buddha’s Appearance.

To the right and left of the throne of DipamkaraBuddha, there are sixteen bodhisattva figures, idealized students of the Buddha originating in the Mahayana Sutras of Northern Buddhism.

At the upper right and left of the Dipamkara Buddha, there are sixteen Buddha figures, eight to each side, seated on billowing clouds.

Additional monks are seated at the lower left and right below the Dipamkara Buddhas. In the bottom foreground of the thangka, there are five human figures.

Four are monastic and one is dressed in the appearance of a yogi with white robes and a meditation belt.

A Buddha is known for having thirty-two major and eighty minor distinguishing physical characteristics based on the Indian cultural description of a Universal Monarch the highest and most developed male form.

Only a few of these 112 marks are depicted in the art such as the Ushnisha on the top of the head, the Urnakesha between the eyes, three curved horizontal lines on the neck, a Dharma Wheel impression on the palms of the hands and soles of the feet.

The identification of the Dipamkara Buddha is proffered based on a process of elimination.

The figure of the Buddha does not have any apparent characteristics of Shakyamuni Buddha such as the earth touching gesture.

The sixteen bodhisattvas eight to each side are missing the signature figures associated with Shakyamuni such as Avalokita, Manjushri, Vajrapani, and others.

Each of the Buddhas of the Three Times would be depicted with their own set of sixteen great Bodhisattvas.

Likewise, the form of the Buddha does not immediately stand out as the future Buddha Maitreya in Buddha’s Appearance.

Typically Dipamkara Buddha would be adorned on the head with a stupa, and a stupa water flask. Both of these identifying symbols are missing.

It is possible based on the two kneeling gods in the lower composition and the five human figures that the central Buddha might be identified as Maitreya the future Buddha.

The thangka is lacking clear iconographic signatures or inscriptions on the front or back of the painting it is difficult to be certain.

The thangka can be identified as belonging to the Qianlong Period and the region can be located to the Beijing area or surrounding district.

The palette of dominant dark blues and green colors along with the white bodies of the human figures are just a few of the characteristics of this 18th-century style. 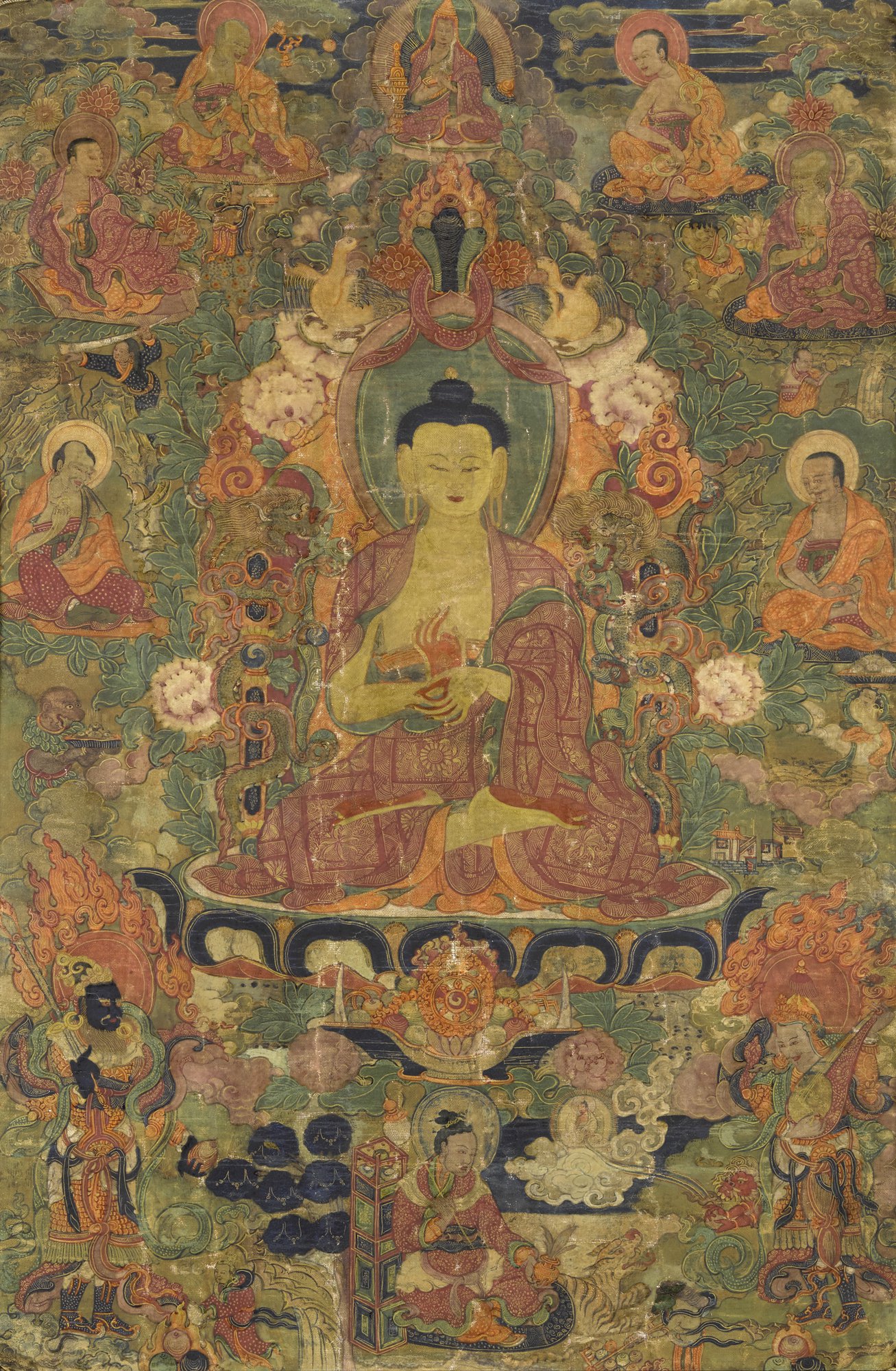 The central figure in this thangka is identified as Dipamkara Buddha because it belongs to a set of thangka depicting Shakyamuni Buddha and the Sixteen Great Elders.

This information is known by identifying the figures in the composition: six elders, one attendant (Dharmatala), and two Direction Kings.

There is no tradition or precedent for creating a composition with this random selection of figures.

The Subjects of Shakyamuni Buddha and the Sixteen Great Elders are the most basic and the first of the common iconographic number sets.

In the Mahayana tradition of Buddhism, it is popular to include the Buddhas of the Three Times either at the top of a single composition or as the central figures in a set of three paintings.

This is the 2nd painting in a set of three thangkas depicting Shakyamuni Buddha and the Sixteen Elders.

Each of the three thangkas has the central figure as one of the Buddhas of the Three Times. 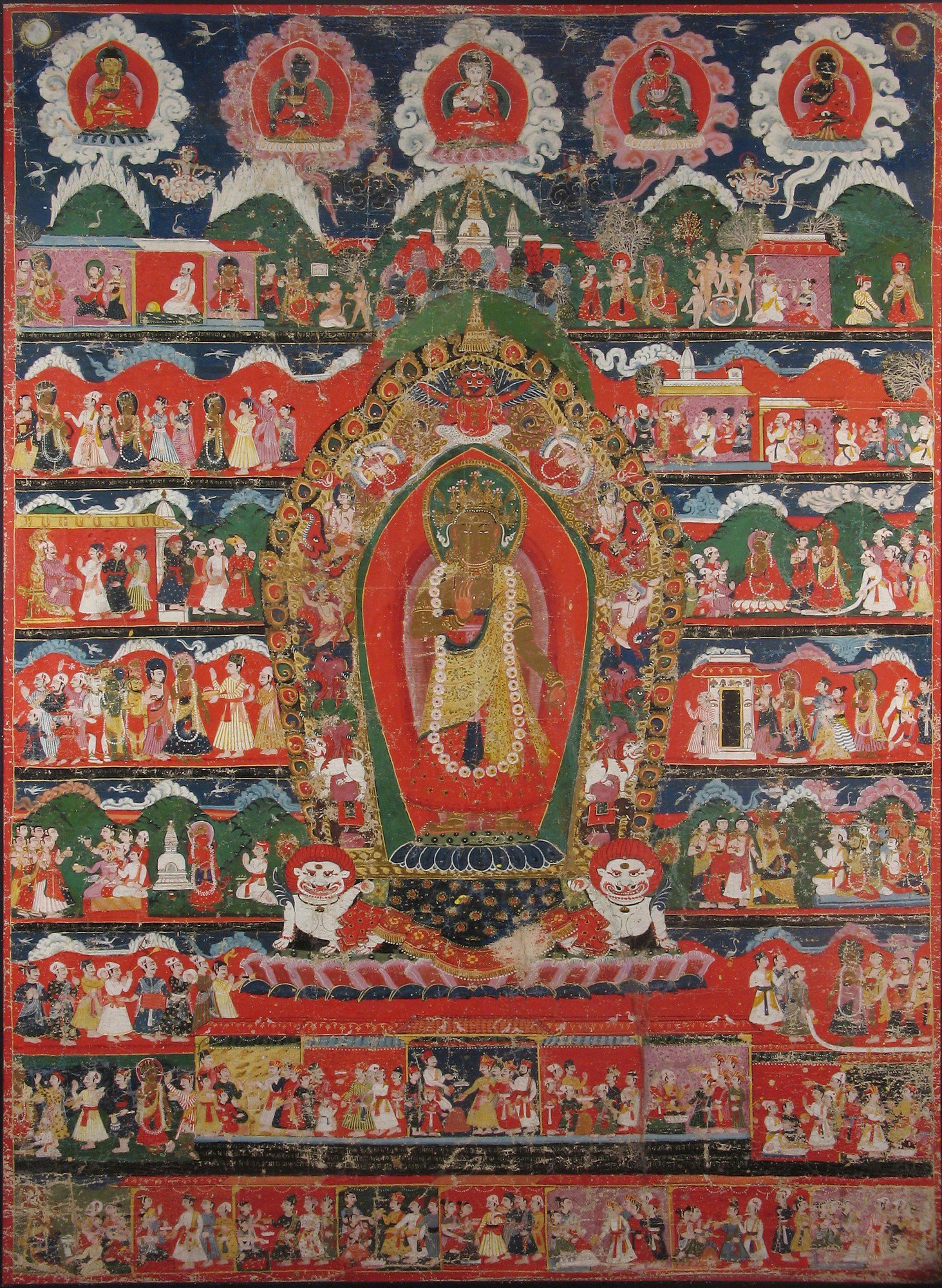 Dipamkara Buddha with Kathmandu narrative scenes and the Swayambhunatha Stupa above the central figure.

Dipamkara is the Buddha of the previous age prior to the time of Shakyamuni the historical Buddha.

Dipamkara is especially remembered as the Buddha that predicted the future enlightenment of the historical Buddha.

In approximately the 17th century his rituals were popularized by Nepalese Buddhists who considered him a patron deity for merchants and alms-giving.

During special alms giving festivals a thangka such as this would be commissioned and displayed. The location of the festival illustrated in the thangka is the Swayambhunath Stupa of Kathmandu.

The stupa is depicted above the central figure. Accompanying depictions of the patrons of the painting appear in the lower registers.

Dipamkara is popularly worshiped in Nepal but rarely found in other parts of the Himalayas, Tibet, or surrounding regions. 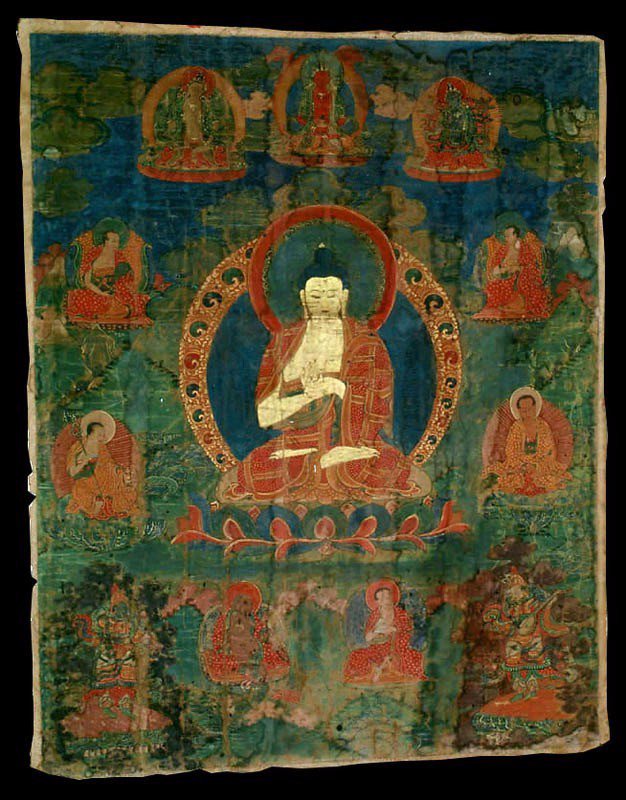 The meaning of Dipamkara Buddha is  Mar ma dze, sang Gye in Tibet.

Dipamkara Buddha is from a set of three thangkas depicting the Buddhas of the three times, Shakyamuni, Dipamkara, and Maitreya, along with the Sixteen Great Arhats.

At the top of the thangka, there is Amitayus Buddha along with what appears to be Manjushri and another bodhisattva.

BothAmitayus Buddha and Manjushri are seated at the upper sides.

Four Arhats descend alongside the central figure with another arhat Hvashang and two Direction Kings.

Virupaksha and Dhritarashtra are at the bottom in the thangka. 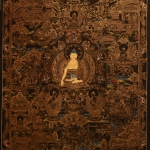