Medicine Buddha (Tibetan: Sanggye-Menlha) called in Sanskrit Bheshajaguru i.e. Buddha of Healing. He wears monastic robes and sits on a lion throne. The color of his body is dark blue and he holds a bowl in the left hand having the medicinal plant called aura (not known scientifically) He holds a stem of the arura plant in his right hand. Sometimes, Medicine Buddhas are depicted in the company of Shakyamuni Buddha. The Medicine Buddha is the supreme physician and is probably founded upon the legend of metaphysical Bodhisattva, the medicine King (Bheshajaraja), who is mentioned as the dispenser of spiritual medicine. When positive or joyous feelings and attitudes pass through each organ and circulate through our whole system, our physical and chemical energies are transformed and balanced.

Who is Medicine Buddha?

In Sanskrit, Medicine Buddha is also known as Bhaisajya Guru.

What is the meaning of Medicine Buddha Mantra?

The third phrase, maha bekandze, or “great eliminating,” refers to eliminating even the subtle imprints left on the consciousness by disturbing thoughts. The om is composed of three sounds, ah, o, and ma, which signify the Medicine Buddha’s completely pure holy body, holy speech, and holy mind.

What are the benefits of the Medicine Buddha Mantra?

The Medicine Buddha mantra is often canted to become extremely powerful for healing physical illnesses and purification of negative karma. One form of practice based on the Medicine Buddha is done when one is stricken by disease.

Even more important than the capability of the mantra to heal the body is its power to heal the mind. Mantra gently opens and transforms emotional states, helping us to deal with any situation clearly and directly. It promotes peace, calmness, and tranquility in your heart.

The happiness you experience is transmitted to others, thus you benefit them as well. One of the best healing meditations is that of the Medicine Buddha who is the manifestation of the healing energy of all enlightened beings. 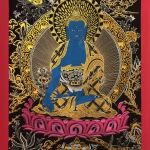