Maitreya is the first bodhisattva to have a cult built around him, and he is attested in writings dating back to the third century CE. He was accepted by all schools of Buddhism, and the Theravada tradition today honors him as the lone bodhisattva.

Who is Maitreya Buddha?

Maitreya Buddha is regarded as the world’s future Buddha who has yet to come down from the sky. Maitreya is derived from the Sanskrit word “Maitri,” which meaning “friends.” He is considered to be the fifth Buddha who will arrive in this era. According to legend, Maitreya Buddha concentrated in deep love meditation while meditating as a bodhisattva.

What is the meaning of the Maitreya Buddha Mantra?

Maitreya Buddha Mantra is often chanted to remove negative energy. It aids in the transformation of powerlessness into action and strength. 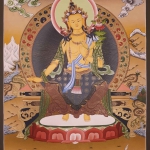 Maitreya Buddha art is hand-painted in Cotton Canvas in Kathmandu, Nepal. Maitreya represents the future state of love emanating. This is embodied by the Adi Buddha Samantabhadra & gained by using the tools of Vajrayana ‘magical’ Buddhism & can be realized from the adamantine truth of emptiness embodied by Adi Buddha Vajradhara.
Maitreya Buddha Art Online