Kathmandu, The Land of Bhairava 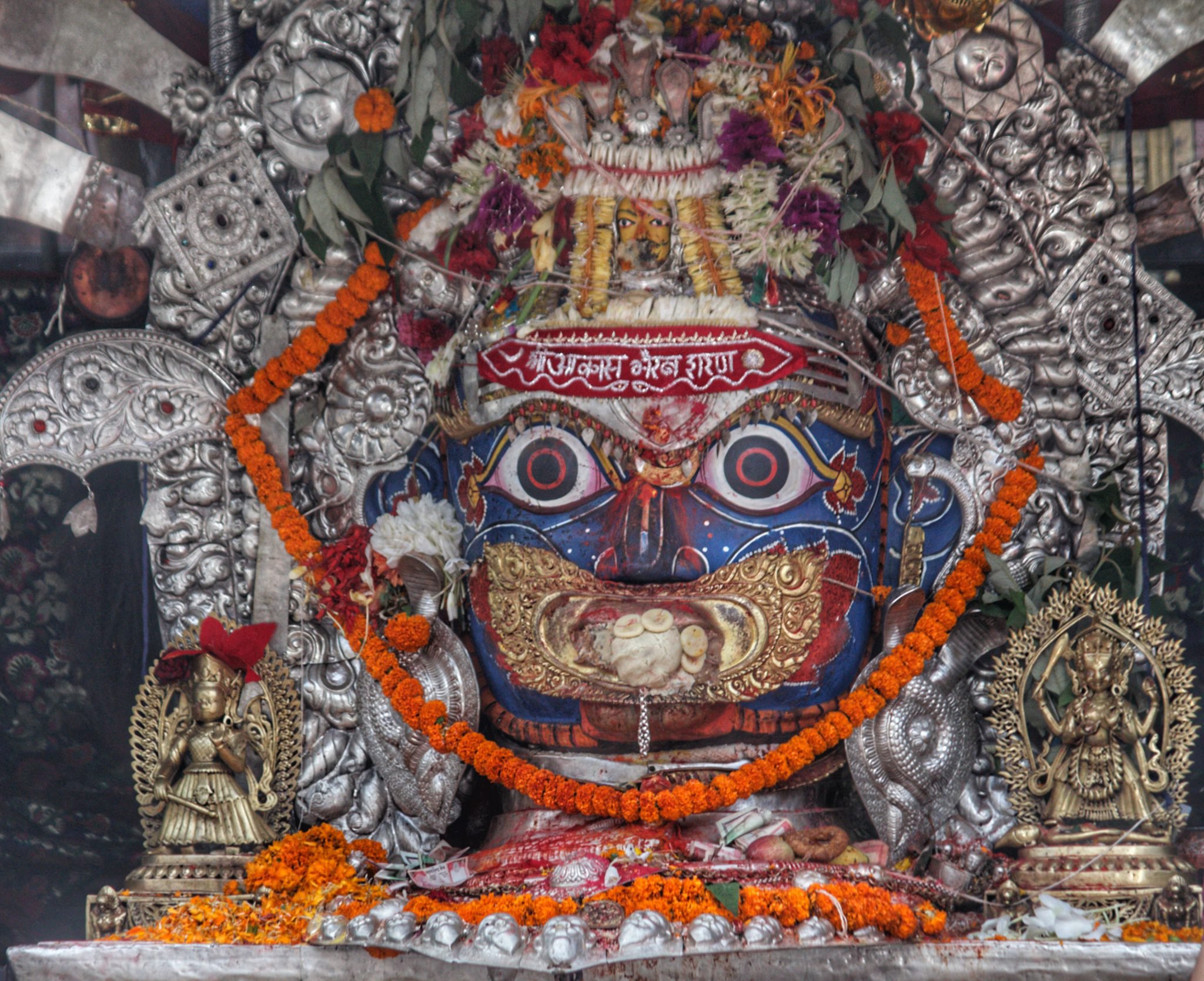 Kathmandu, The Land of Bhairava

In popular lore, the god of time and death, Kaal Bhairava was considered to be the judge, jury, and executioner in ancient times. Anyone accused of the crime was made to stand before Kaal Bhairava for judgment.

Bhairava in the Indra Jatra festival

Under sunny skies, huge crowds packed the Durbar square in Kathmandu to witness the Indra Jatra festival. Among the many dazzling attractions, is a religious practice of the chariot procession of the living embodiment of Lord Bhairava, a young teenager alongside the living goddess Kumari and Lord Ganesh. The devotees walk alongside the chariots for auspicious sightseeing. The sculptures of Bhairavas are an important part of the festival and they are displayed at various places in Kathmandu.

Whenever a dynasty came into power in different parts of Nepal, the king would establish temples, transforming villages and towns into prominent religious centers. The Bhairava was their most preferred deity. Bhairava which means “frightful” or “terrible” is the fierce manifestation of Shiva. Bhairava sculptures and temples were built in Kathmandu by the kings to guard the kingdom against enemies, debt, and adversities.

Lichhavi ruler, Gunakamadeva, who is considered as one of the first rulers of Kathmandu established several shrines of Bhairavas including the Panchalinga Bhairav temple to protect his kingdom. There are as many as 64 Bhairavas that guard and control the different directions.

8 Bhairavas (Astha Bhiaravas) are of special significance and are considered important manifestations of Shiva.

They are collectively known as Ashta Bhairavas, the eight-Bhairavas. The chief among the Bhairavas is Kaal Bhairava, the dark and frightful aspect of Shiva.

The representations of Bhairava in Kathmandu Durbar Square

The worship of different forms of Bhairavas is part of Hindu tradition and Bhairava is also sacred among Buddhists. In Nepal, every significant shrine or pilgrimage destination is guarded by Bhairavas who not only bless but also punish the devotees.

The Kaal Bhairava is located in Hanuman Dhoka at the Kathmandu Durbar Square, one of the UNESCO World Heritage-listed palace squares of Nepal. This ancient statue of Kaal Bhairava is known as the protector of Kathmandu and the chief justice giver. In popular lore, the god of time and death, Kaal Bhairav was considered to be the judge, jury, and executioner in ancient times.

Anyone accused of the crime was made to stand before Kaal Bhairav for judgment. The criminals trembled with fear and confessed the crimes. If they lied, then they vomited blood and died. Senior ministers and royal courtiers also made oaths in front of the sculpture.

The 12 feet tall sculpture is believed to have been sculptured from a single block of stone. The six-armed Bhairava is stepping over a dead body holding a decapitated head in one hand. The god of justice also has a garland made up of heads around his neck.

The Bhairava was formed when an enraged Shiva wished to teach Lord Brahma a lesson for being arrogant. It’s believed that he helps to keep one’s ego in check. People worship Kaal Bhairav to overcome diseases, poverty, and enemies. It’s also said he protects his devotees from premature death. King Pratap Malla established the temple of Kaal Bhairava in the 18th century in its present location after it was discovered in the jungles. However, the sculpture itself is said to be more than a thousand
years old.

About 50 meters from the Kaal Bhairava lies the giant sculpture of Swet Bhairava, the white Bhairava. Also known as Haath dyo by the locals, Swet Bhairava is another epithet of Bhairava with protruding teeth and large bulging eyes. The Bhairava has a golden crown burning with raging blazes, decorated with skulls and a crescent moon.

The sculpture was installed in the Basantapur Durbar Square in the 18th century during the rule of King Rana Bahadur Shah, the son of King Prithvi Narayan Shah. The Bhairava is hidden behind a wooden latticed window throughout the year and is only revealed once a year during the Indra Jatra festival. The legend goes that people walking around the sculpture late in the night started disappearing mysteriously.

So, it was decided that the sculpture should be hidden to prevent the wrath of the god and he would be displayed only during the Indra Jatra when the god is worshipped. During the Indra Jatra festival, the fierce sculpture is open to the public, and alcohol is poured from the mouth of Swet Bhairav through a pipe. A huge crowd gathers to get a taste of thon, a traditional rice wine. Homemade liquor is considered a blessing.

Head of Bhairava (Akash) in Basantapur Durbar Square by Sambid

Akash Bhairava is considered to be a calmer form of Bhairava and protector of children. The sky blue-colored deity is displayed to the public during the week-long Indra Jatra festival. Legend has it that the sculpture of Akash Bhairava is the head of Kirant King Yalambar of Nepal. Yalambar is portrayed as Barbarika in Mahabharata. Barkbarika was bound by the principle of always fighting for the underdogs or the warriors who were losing on the battlefield.

The Pandavas had the upper hand against the Kauravas in the battle of Mahabharat. Lord Krishna who was on the side of the Pandavas realized that Barbarika would take the side of the losing Kauravas and Barbarika posed a great threat to the Pandavas. Krishna told Barbarika that before the war, the strongest warrior must be sacrificed. Krishna said that he considered Barbarika to be the most courageous and strongest warrior among all and asked for his head. Barbarik sacrificed himself but his final wish was to witness the great war. Krishna granted his wish and put his head on a hill. From there, he watched the great battle of Mahabharata without taking part in it. The sculpture is decorated with silver ornaments and handmade garlands made of colorful flowers during Indra Jatra. Indra Jatra is also popular for the masked dances.

One of the dances is the Akash Bhairav naach, an ancient masked dance performed by the Newar community where a man in blue attire, dressed as Aakash Bhairav performs the ritual dance with Chandi Kumar and Chandi Kumari.