Description of the Kingdom of Shambhala 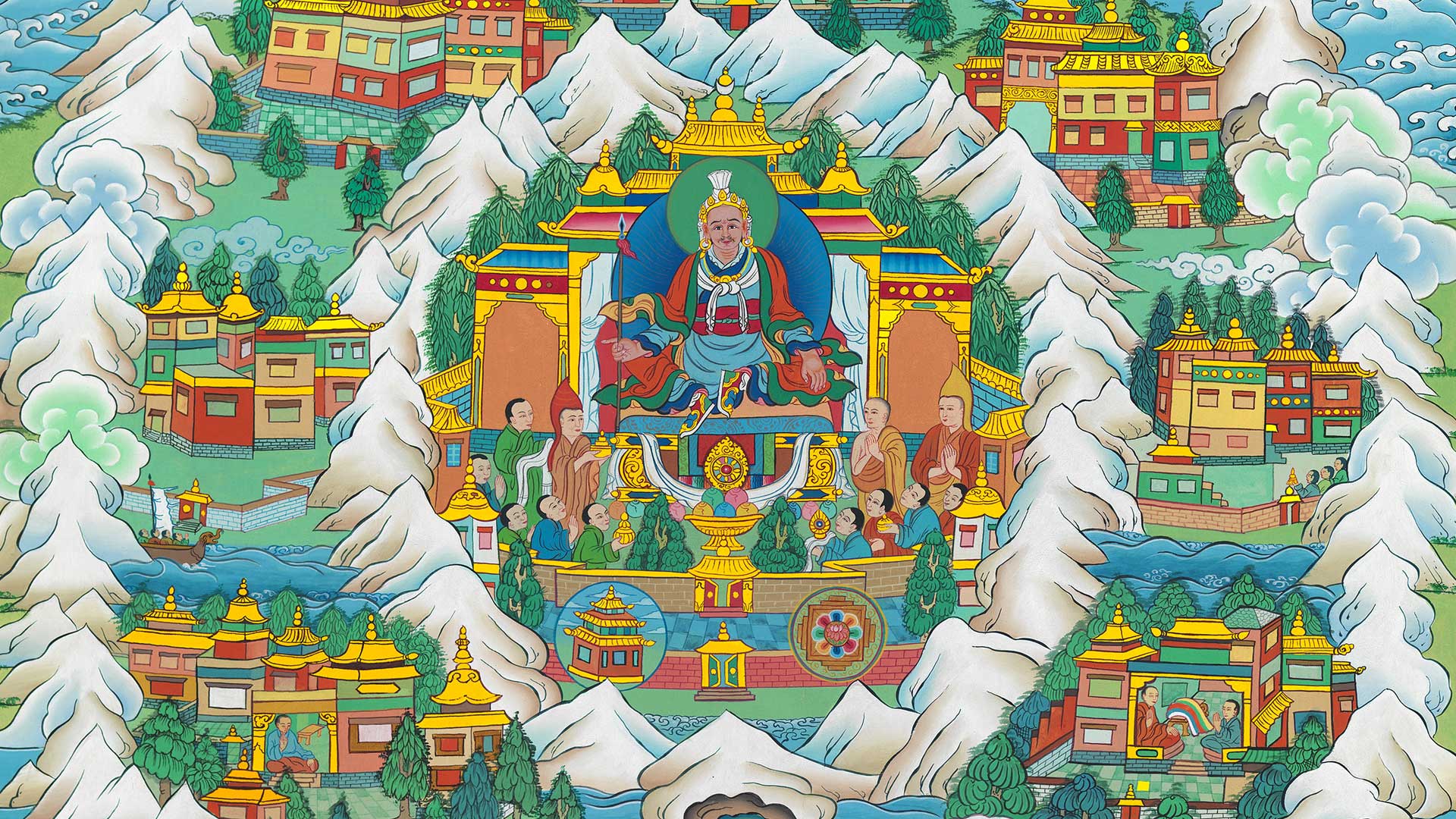 Description of the Kingdom of Shambhala

Descriptions of the kingdom of Shambhala are based both on literature said to emanate from Shambhala itself and by later commentators, mainly Tibetans, who claimed to have visited the kingdom in the material realm, on an etheric plane, in dreams, or by some other means.

As the descriptions will make clear, this is not of “historical” Shambhala; i.e., a country that once existed in the time-space continuum recognized by Western historiography—for instance, the ancient kingdom of Uighur kingdom of Khocho, sometimes identified as Shambhala, but instead what we may call the “Pure Land” version of Shambhala. This, of course, does not necessarily imply that this version does not “exist” in some spiritual or etheric plane.

Some Tibetan sources maintain that the realm which became Shambhala was originally ruled by a member of the Sakya clan named Shambhaka and that the word “Shambhala” is based on his name. These same sources maintain that the word “Shambhala” means “Held by the Source of Happiness” in Tibetan. The first written accounts of Shambhala would have been in Sanskrit, however, and it must be pointed out that current-day scholars are not at all sure of the etymology of the word in either Sanskrit or Tibetan.

“As for the measurements and description of the Land of Shambhala,” as one Tibetan commentator notes, ”its appearance varies according to one’s own karma. For example, one and the same river will be seen by gods as nectar, by man as water, by hungry ghosts as pus and blood, and by some animals as a place to live in. Therefore, it is difficult to say specifically what anything is.” It is possible, however, to give a “description of Shambhala, established by the collective karma of sentient beings” and thus reported in written sources. This description of Shambhala is also depicted on thangkas of Shambhala with varying degrees of verisimilitude.

According to Tibetan descriptions, the kingdom of Shambhala is shaped like a gigantic eight-petaled lotus. Around the outside perimeter of the lotus is a circular range of lofty, snow-covered mountains.  Between the eight petals of the lotus are eight lower mountain ranges along which flow the rivers of Shambhala. The center of Shambhala, the seed vessel of the lotus, is surrounded by a pericarp constituting of a lower range of snow mountains Within this inner ring of mountains, slightly elevated above the petals of the lotus, sits Kapala, the capital of Shambhala, measuring twelve leagues in breadth. Kapala is occupied with magnificent palaces constructed with precious metals and gems: gold, silver, emeralds, pearls, turquoise, coral, and so forth. Mirrors on the outsides of the palaces blaze with light, and crystal skylights in their ceilings allow the inhabitants to view the entire zodiac and the gods of the sun, moon, other celestial spheres. Traditional Tibetan sources give a sumptuous description of the biggest palace, the King of Shambhala’s residence:

The palace . . . is square and has four doors. Along a coral ledge around the outer walls are dancing goddesses. It is nine stories and is crowned at the top with a banner and a wheel of Dharma with a male and female deer on either side. There are three rings encircling the palace, making it especially beautiful. It also has a molding of liquid Jambu gold, as well as full and half-hanging ornaments of pearls and diamonds. At the top of the outer walls are hanging pendants of silver and protruding lintels of turquoise. Its windows are of lapis lazuli. The doors and lintels above are of emeralds and sapphires. It has golden awnings and banners, and a roof of jewels and heat-producing crystal, while its floor is of cold-producing crystal. Its pillars and beams are of zebra-stones, corals, pearls, and so-forth. It also has many other priceless treasures such as the inexhaustible treasure vase, the wish-fulfilling cow, the unsown harvest, and the wish-granting tree.

The ruling king of Shambhala sits on a throne made of gold from the Jamba River. He wears the robe of a Chakravartiraja—a universal king of Dharma—a headdress made of lion’s hair and adorned with images of the five Buddha Transcendent Buddhas, and long earrings and bracelets made also of gold from the Jambu River. Both his body and his ornaments emanate blindingly brilliant red and white light. Surrounding the King are his ministers, generals, bodyguards, elephants and their trainers, and warriors. His main queen is the daughter of one of the ninety-six satraps of Shambhala. He has many other queens besides and many sons and daughters. When the next king (not necessarily the oldest son) is expected the unborn the baby emits jewel-like light for a week before its birth, and right after its birth white lotus flowers fall from the sky.

On the peaks just north of these palaces are depicted ten thousand images of each of ten bodhisattvas: Bhadrapala, Merusikharadhara, Kshitigarbha, Manjusri, Avalokitahalahala, Ayra Tara, Guhyakadhipati Vajrapani, Devi Kesini, Paramarthasamudgata, and Maitreya (these are not depicted on most Shambhala thangkas).

South of the main palace is a grove of Sandalwood trees (not depicted on all thangkas) and in the middle of the grove is a huge three-dimensional Kalachakra mandala constructed by the first King of Shambhala of gold, silver, turquoise, coral, and pearl. Nearby are also other mandalas built by later kings of Shambhala. To the east of the Sandalwood Grove is a body of water known as Near Lake and to the west is White Lotus Lake. In both of these lakes gods, nagas, and humans comport themselves on boats made of jewels.

The people who live in all these countless cities and counties have great wealth, happiness, and no sickness. The crops of good and everyone passes their with Dharma. As all the kings [satraps] are religious one, there is not even a sign of non-virtue or evil in these lands. Even the words “war” and “enmity” are unknown. The happiness and joy can compete with that of the gods . . .  In addition, all the new products for daily samsaric use which have been manufactured spontaneously without any effort are to be found.

The villages of Shambhala are made up mostly of two stories houses of the kind found in India. Men wear white or red cotton robes; woman white or blue dresses decorated with pleats and various designs. All the people of Shambhala lead wholesome lives, and there is no crime, famine, or disease. These satraps all teach the Kalachakra to their subjects. Most residents of Shambhala achieve Buddhahood in their own lives by means of various tantric teachings, including the Kalachakra.