Pratisara and the Pancha Raksha is also known as Fifty-six Deity Mandala. is a Bodhisattva belonging to the Mahayana and Vajrayana sects. She is sometimes presented as the consort of Vairocana.

In this portion, we are going to learn about the life of Pratisara, after that short etymological description of the word Pratisara itself.

Pratisaea is known as the Great fulfiller of wishes.

Earlier, we learn about the life of Pratisara. Now we are going to learn about five Panca Raksha.

Now, we will learn about the description of the Five Pancha Raksha.

Maha Sahasrapramardinhas is a bodhisattva who has four faces, eight hands. She is yellow in color.

Mahapratisara has four heads and eight arms. She is white in color and her heads are successively yellow, white, red, and green.

She is seated on a lotus throne in vajraparyanka posture. She wears the diadem. In her right hands, she holds a vajra, an arrow, a sword, and in her left hands holds a trident, a bow, and an axe while her two principal hands hold a wheel and a garment. 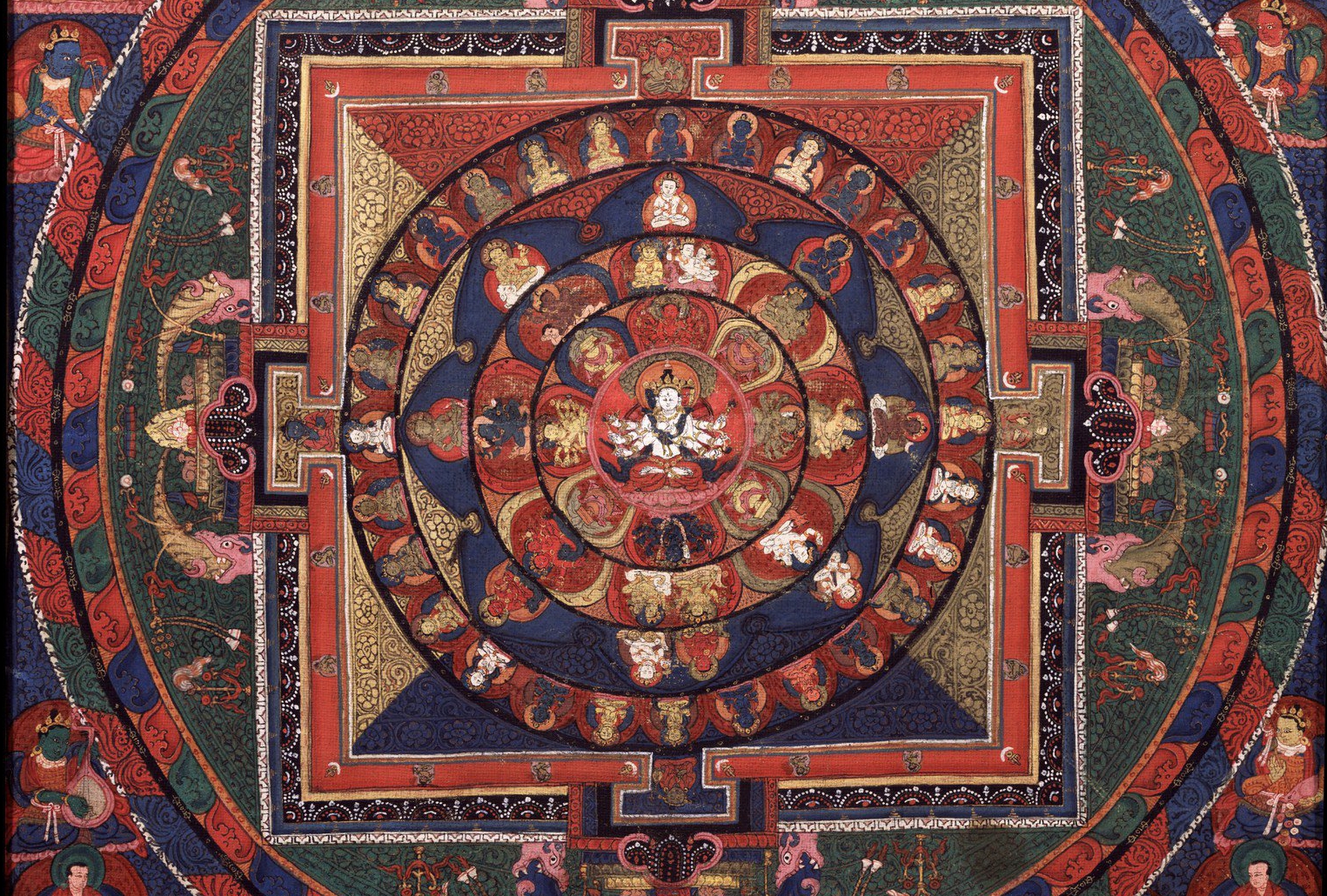 The recitation and sadhana of this protectress deity confer great benefit and protection. One such example befitting to this context is described in the first chapter of the Pancaraksha sutra.

It is said that one who holds the Dharani of Mahapratisara will be protected from all forms of illness, eliminate the past non-virtuous karma, protect from all sorts of dangers. They take rebirth in higher realms. Their body becomes a vajra body not affected by fire, weapons, and others.

In Bhadrakalpavadana it is said that Buddha Shakyamuni renounced his palace life before the birth of his son Rahula. He touched his wife Yasodhara’s navel with his thumb finger of the right foot and made a great vow that she be protected from great dangers which were to come to her in the future.

After his great renunciation, Yashodhara bore his child for six years inside her womb. Before the delivery of the child Rahula, she was put to many hazardous trials and tribulations by his cousin Devadutta. But in all cases, Yashodhara came out unhurt due to the miraculous power of Mahapratisara Devi.

Nepalese Buddhists thus wear amulets for their protection against various sorts of unseen dangers. These amulets contain the Dharani of Mahapratisara Devi.

Maha Sahasrapramardini is a bodhisattva. She has one face, six hands. She is white in color.

Mahamayuri or Mahamayuri Vidyarajni is a bodhisattva and female Wisdom King in Mahayana Buddhism. Her origins are said to derive from an Indian goddess of the same name. She is also the name of one of the five protective goddesses in the Buddhist Pantheon.

She is also known as the Queen of the secret sciences.  Mahamayuri-Vidyarajni is known as the Godmother of Buddha in Mahayana Buddhism. Mahamayuri is believed to have the power to protect devotees from poisoning, either physical or spiritual.

In Buddhism, Mahamayuri’s demeanor is in contrast to the wrathful attitudes of male personifications of the Wisdom Kings. The Mahamayuri text is a Buddhist Dharani-genre text.  The Mahamayuri text contains magical incantations to treat snake bites, poisons, and other maladies.

Sitavati has one face and for hand. She teaches a charm to mitigate evils caused by Navagrahas in nichasthana, wild animals, and poisonous beings.

A mythical Buddha is said to have imparted this charm to his son Rahula at the mahAsmashAna of Rajagrha.

The deity invoked in this mantra is mahasitavati, a devil who sports six hands, three heads and appears seated on twin Garu Das. She gets her name from her green complexion.

According to Sadhanamala she is six armed and has three faces. She is green in color. In her right hands, she holds a lotus with the gesture of fearlessness, the arrow, the sword, and in her left hands she holds a jewel banner, a bow, and a lasso or a noose.

She is seated in the ardhaparyanka posture and wears a crown. She wears all the ornaments of a bodhisattva and sits on a lotus throne.

The characteristic feature of this deity is that she protects the beings from the evil effects of the planets, wild animals, and poisonous insects.

According to the Mahasitavati Sutra, at one time Lord Buddha was dwelling at the cemetery of Sitavan in Rajagriha.

At that time Venerable Rahula was troubled by many evil beings. Then Rahula went to see Lord Buddha and reported this incident with tears in his eyes.

The Buddha then suggested to him to recite the Dharani of Arya Sitavati for protection from all sorts of harmful influences from the evil deities, planets, yakshas, snakes, non-human beings, and others.

It is said that the recitation of this Dharani relieves all disasters and is protected by all-powerful four great divine kings.

In this section, we are going to learn about five forms of deities.

These five deities each have specific functions.   The first one is directed towards accomplishing worldly welfare and happiness, the Second one is preventing and surviving natural disasters, the third one is for curing snakebite,  and the last one is for overcoming fear and averting pestilence and epidemics.

There are many forms for each of these five deities, with multiple heads and arms, and many different traditions of practice. They are popular throughout the Himalayas and Central Asia. It can be found in China and Japan also.

The top registers of the mandala contain the lineage of teachers beginning with the bodhisattva Vajrapani at the top left. In the bottom right corner, there is the two principal who is called protectors of the Sakya Tradition, Panjarnata Mahakala and Shri Devi. At the bottom center of the mandala, there are two wealth deities, yellow Vasudhara and a red Ganapati. At the far left sits of a mandala donor figure in front of a table of offerings.