Depicting Mahakala, Chaturmukha who was known as the Four-faced Great Black One. Mahakala was associated with the Guhyasamaja Tantra along with the Twenty-five and Fifty Chapter Mahakala Tantras.

The Life of Chaturmukha Mahakala

Iconography of the Chaturmukha Mahakala

In the iconography of Mahakala, we will learn about his body posture, hand and leg gesture, and different representations of Mahakala in thangka and statue.

The main face of Chaturmukha Mahakala and the stacked face are both black, the two on the right and left are dark green of the Mahakala. With four arms the first two right and left hold a curved knife and blood-filled skullcup to the heart. The lower right holds a sword.

The lower left of Mahakala holds upraised a bone garland of beads. The brown hair bristles upwards and there are three eyes, also bared fangs, lower lip distended, a crown of five dried skulls, a necklace of fifty fresh heads, a Brahmin’s cord, bone and snake ornaments. He stands in a manner with the right leg bent and the left straight; having an appearance of magnificent wrathfulness.

We are going to learn about the list and the description of Indian lineages.

The following are the Indian lineage of Mahakala which are listed and presented below:

Vajradhara is the supreme buddha, who is also known as the primordial Buddha without beginning or end, lord of all mysteries, master of all secrets. It is to Vajradhara the subdued and conquered evil spirits swear allegiance and vow that they will no longer prevent or hinder the propagation of the Buddhist faith. Vajradharais thought to be too ‘ great a god and too much lost in divine quietude to favor man’s undertakings and works with his assistance, and that he acts through the god Vajrasattva.

Vajradhara would be to him in the relation of a Dhyani-Buddha to his human Buddha. He is always represented seated, with his legs locked and the soles of his feet apparent, and wears the Bodhisattva crown as well as the dress and ornaments of an Indian prince. His arms are crossed on his breast in the vajra-hum-kara mudra holding the vajra and ghanta.

Nagarjuna is widely considered as one of the most important Buddhist philosophers. Along with his disciple Aryadeva, he is considered to be the founder of the Madhyamaka school of Mahayana Buddhism. Nagarjuna is also credited with developing the philosophy of the Prajnaparamita sutras and, in some sources, having revealed these scriptures in the world, having recovered them from the nagas.

Ratnavajra is the name of a city that was associated with Ghorandhakara: the south-western cremation ground according to the Vajravarahi-sadhana by Umapatideva as found in the 12th-century Guhyasamayasadhanamala. As a part of this sadhana, the practitioner is to visualize a suitable dwelling place for the goddess inside the circle of protection which takes the form of eight cremation grounds.

Ratnakirti was a Buddhist philosopher of the Yogacara and epistemological schools (Pramanavada) who wrote on logic, philosophy of mind and epistemology. Ratnakīiti studied at Vikramashila University under Jnanasrimitra (975–1025). Ratnakirti introduced the two truths doctrine as key to the nature of the discussion.

From early childhood, Sachen showed great signs of wisdom. At the age of twelve, Sachen, under the guidance of his guru, Bari Lotsava, performed one-point meditation on Manjushri. After meditating on this for a continuous period of six months, the bodhisattva appeared in front of him.

Types of the Chaturmukha Mahakala

We will learn about types of Chaturmukha Mahakala.

Tarana in his text called an Ocean of Meditational Deities describes Chaturmukha Mahakala as having Five types which are listed below:

Demon FaceThe technical descriptions of the various forms of Chaturmukha vary between the text of Taranata and the Rinjung Lhantab text of the 4th Panchen Lama. 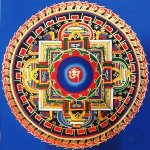 Om Mandala with Blue Background is handpainted in Kathmandu Nepal. Om is in the center of the mandala.
Buy Om Mandala