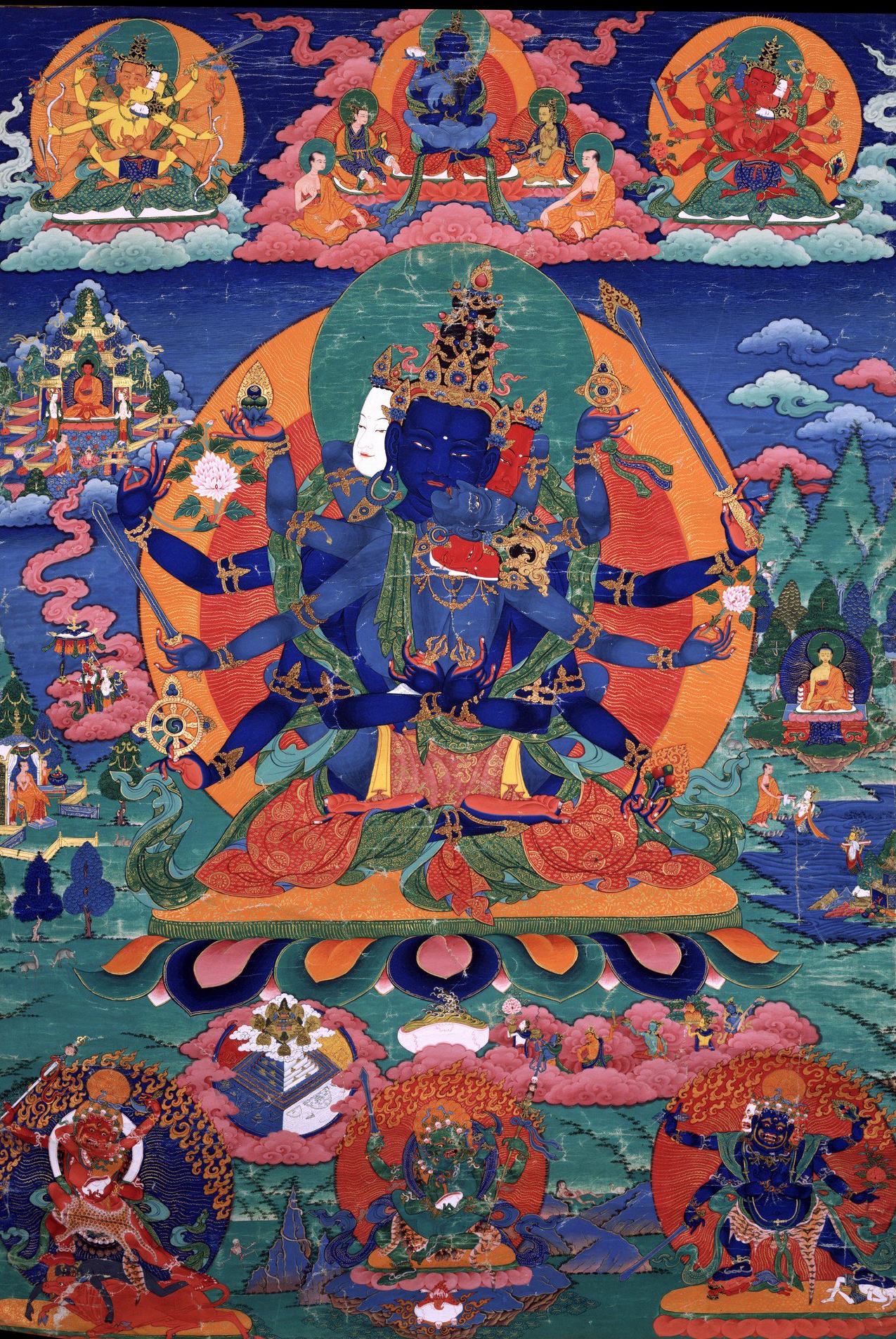 The life of Guhyasamaja

In this portion, we are going to learn about the life of Guhyasamaja.after after the short etymological description of the word Guhyasamajaa itself, and finally, we will highlight the Anuttarayoga tantra.

Guhyasamaja is known as Gsang ’dus rtsa rgyud in Tibet. Guhasamaja is one of the most important scriptures of Tantric Buddhism.

AnutaraYoga Tantra is a group of texts which was never brought to Japan and practiced, although a few seem to be included in the Tripitaka, they are not practiced. These tantras are practiced in Tibetan Buddhism and Newar Buddhism. There are numerous texts and practices in the Highest Yoga Tantra category.

In the iconography of Guhyasamaja, we will learn about his body posture, hand and leg gestures, and different representations of Guhyasamaja in thangka and statue.

Posture of the Guhyasamaja

The main pair of hands of Guhyasamaja hold a vajra and bell embracing the consort and also with three faces. This form of Akshobhyavajra has only two eyes per face. Other traditions describe three eyes per face.

In the remaining hands of Guhyasamaja, they both hold a lotus, wheel, sword, and precious jewel.  Guhyasamaja is adorned with peaceful ornaments and silk garments. They sit in atop a sun disc and multi-colored lotus blossom surrounded by a red-orange nimbus and green aureola.

The left face of Guhyasamaja is red in a desirous manner. All three faces are adorned with very beautiful eyebrows. Each of the six hands is adorned with precious rings.

The ears are made more beautiful with blue utpalas and ribbons. He is wearing various heavenly garments bright like Indra’s bow rainbow. 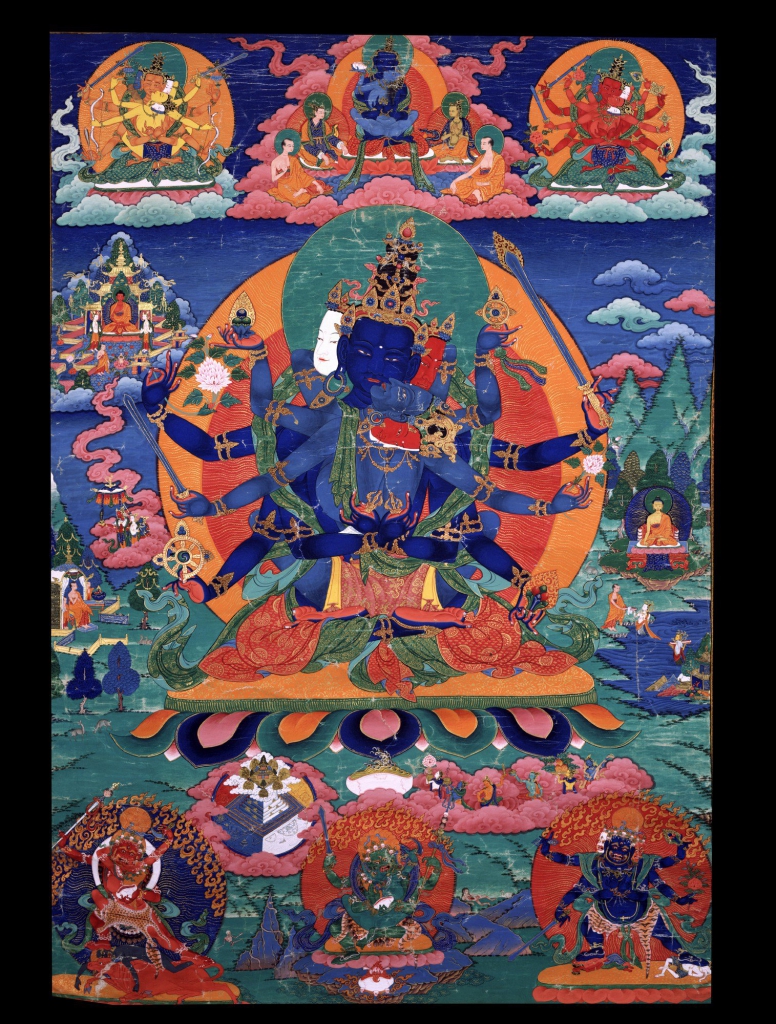 The thangka if Guhyasamaja is from Tibet. The thangka is made between 1600 – 1699 AD. The base of the painting is Ground Mineral Pigment on Cotton. Presently, this painting is in the Rubin Museum of Art.

Vajradhara is in the top center of the thangka. Vajradhara is surrounded by four figures, King Indrabhuti, a bodhisattva like a figure and two monks.

Vajradhara is also known as the primordial buddha and the dharmakaya buddha. Vajradhara is depicted as dark blue in color. He has expressed the quintessence of Buddhahood itself.

Vajradhara represents the essence of the historical Buddha’s realization of enlightenment. Historically, Prince Siddhartha attained enlightenment under the bodhi tree in Bodhgaya over 2500 years ago and then manifested as the Buddha. According to Buddhist cosmology, he was the Fourth Historic Buddha of this fortunate eon. 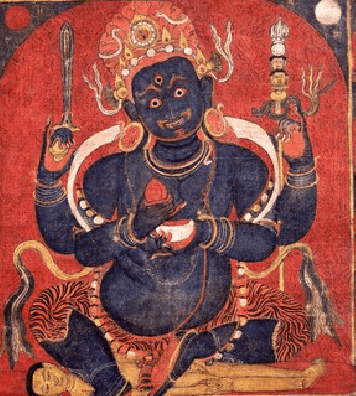 Rakta Yamari is on the left of the Guhyasamaja in the thangka. Rakta Yamari is red in color.  He is embracing the consort Vajra Vetali and riding atop a red buffalo. Rakta Yamari is a Tantric Buddhist meditational deity believed to be an emanation of the deity and bodhisattva Manjushri.

There are two general types of Yamari deities – red Rakta and black Krishna. The Red Rakta Yamari has several different traditions each primarily differentiated by the number of deities represented in the mandala and the associated human lineage teachers. The Krishna and Rakta Yamari figures belong to the New Sarma Tradition of Tibetan Buddhism and are practiced in all of the main schools.

Manjushri has a number of popular meditational forms belonging to the Anuttarayoga Class of Tantric Buddhism which is primarily the Manjuvajra Guhyasamaja, Vajrabhairava, and the two Yamari red and black. Manjushri also has dozens of peaceful meditation forms originating in the Kriya, Charya, and Yoga Tantras.

Humkara is on the right side of the Guhyasamaja in the thangka. Humkara is a wrathful blue Humkara. Humkara is with three faces and six hands. 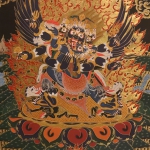