All you need to know About Navaratri – Durga Puja 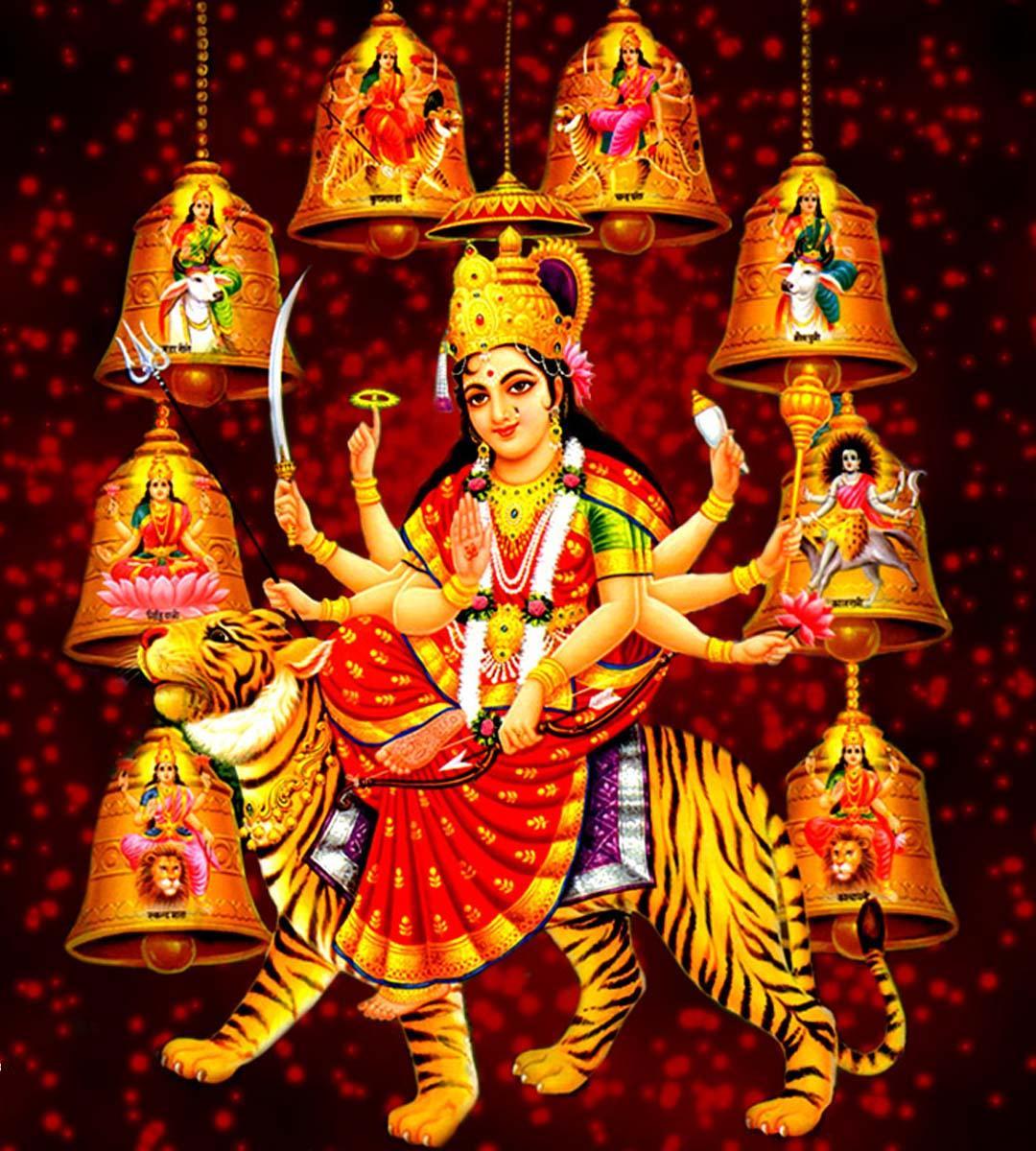 All you need to know About Navaratri – Durga Puja

Navaratri, the Sanskrit word for “nine nights”, also called Durga Puja is a major festival held in India for the honor of the divine feminine. There are two festivals of Navaratri: Chaitra Navaratri and Sharad Navaratri or Maha Navaratri. Chaitra Navaratri occurs during the spring season.

In Nepal, the same Navaratri is named Nauratha and ends with the Bijaya Dasahami celebration on the 10th day.

History and Significance of Navaratri

Many mythological stories are hidden behind the glory and story of the Devi. One such is Devi Mahatmya.

The tale associated with Navratri is the battle between the goddess Durga and the demon Mahishasura. Mahishasura had been granted immortality by Lord Brahma and had been told that he could only be defeated by a woman. Trilok (Earth, Heaven, and Hell) was attacked and the Gods were not able to kill the demon.

Finally, along with Lord Brahma, Lord Vishnu, and Lord Shiva, Goddess Durga was created, to defeat Mahishasura. For 9 days, she fought with him, and the demon kept changing its shape. Mahishasura would take various forms to confuse Goddess Durga. Finally, it’s when Goddess Durga killed him with her Trishul when he transformed into a buffalo. In our life, the ego and ignorance represent the demon.

The significance of Navaratri comes from the word Ratri. The literal meaning of “Ratri” is a time when one turns inward, and when one becomes rejuvenated. That which gives solace from all three misery(physical level, mental level, and casual level) is called Ratri. Thus, Navaratri is the time where the spiritual seekers go deep within to rest and start the year afresh.

The nine days in Navaratri are also compared to nine months we spend in the womb of the mother. When the child is in the womb, it doesn’t have to do anything, similarly, during Navaratri, a person goes deep within mantras and chanting of Devi. The Devi represents the Shakti and the demons represent different forms of ego and negative characteristics inside us.

Thus, through Navaratri we invoke the Shakti, we honor and worship the Devi Shakti so that it may overcome all these negative tendencies in us and make us free from them.

The silence during Navaratri purifies our speech. Then listen to knowledge about Devi; which helps in purifying the intellect. They sing the devotional song, Bhajans, that purifies emotions. All in all, these practices, helps us connect with the consciousness and increase the Prana Shakti (Life Force).

The nine forms of Durga known as Nava Durga, as described in the sacred text Devi Mahatmya is as follows:

All the nine forms of Durga/Devi signify nine different qualities like strength, transformation, anger, beauty, compassion, fear, power, and so on. 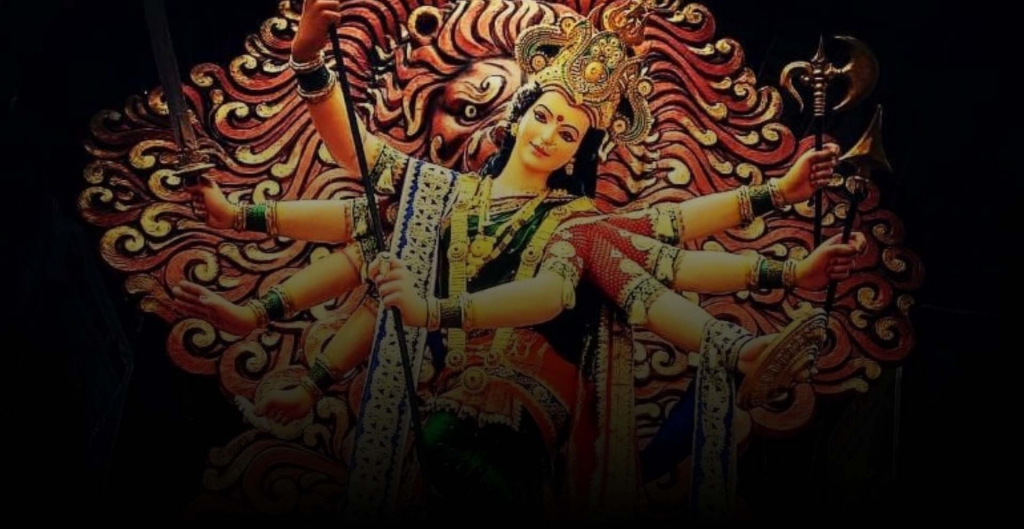 Shailaputri, also known as the daughter of the Mountains. She governs the Queen of Planets, the Moon. The literal meaning of Shaila is peak; meaning the highest level of consciousness for spiritual seekers.

Shailaputri “reflects the realization of Muladhara Shakti within oneself and is explored in yogic meditation for greater depths.”

In Navratri pooja, the first day is devoted to keeping Yogi’s mind focused on electricity production in Muladhara. This is their spiritual discipline’s starting point. 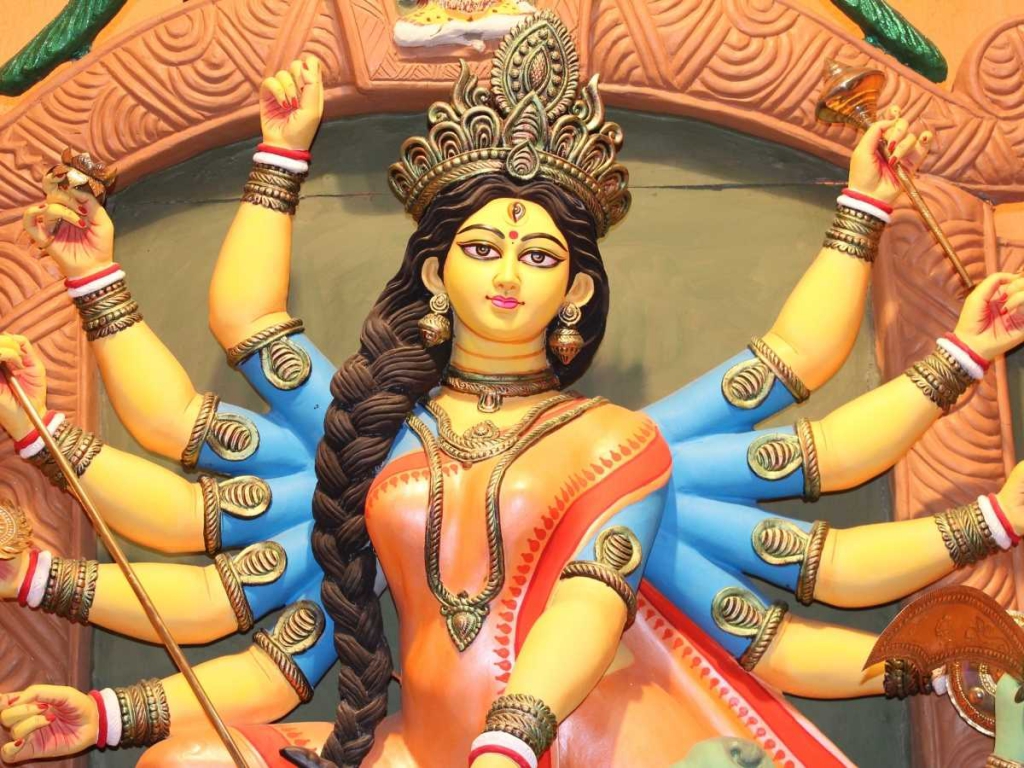 Brahmacharini is the one who practices celibacy. She governs the action planet Mars.

Brahmacharya means not indulging in small things, but indulging in the whole, not getting trapped in small, minimal things. So, the consciousness that is all-pervading is Brahmacharini. Her energy is connected to Sacral Chakra in our body. 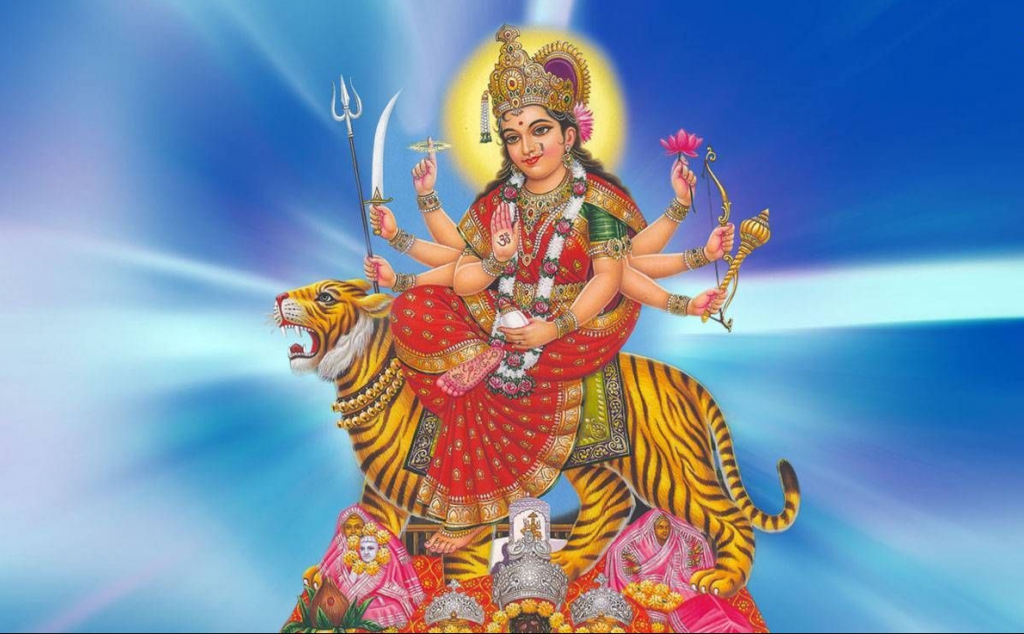 Chandraghantha is the one who wears a half-moon on her forehead. She governs the love and beauty of planet venus. Chandra (Moon) signifies the mind. The mind continues to have its ups and downs. Typically, in our own heads, we fight. Bad thoughts come to mind, such as envy, hate, etc., and one begins to struggle to get rid of them, but it does not happen.

The essence here is to take everything together as a collective whole, whether harmonious or negative, taking all feelings, emotions, and sounds as one Naad (sound), like the sound of a bell or a big gong. That’s the significance behind the name Chandraghanta.

Chandraghanta is associated with the chakra Manipura, Solar Plexus. 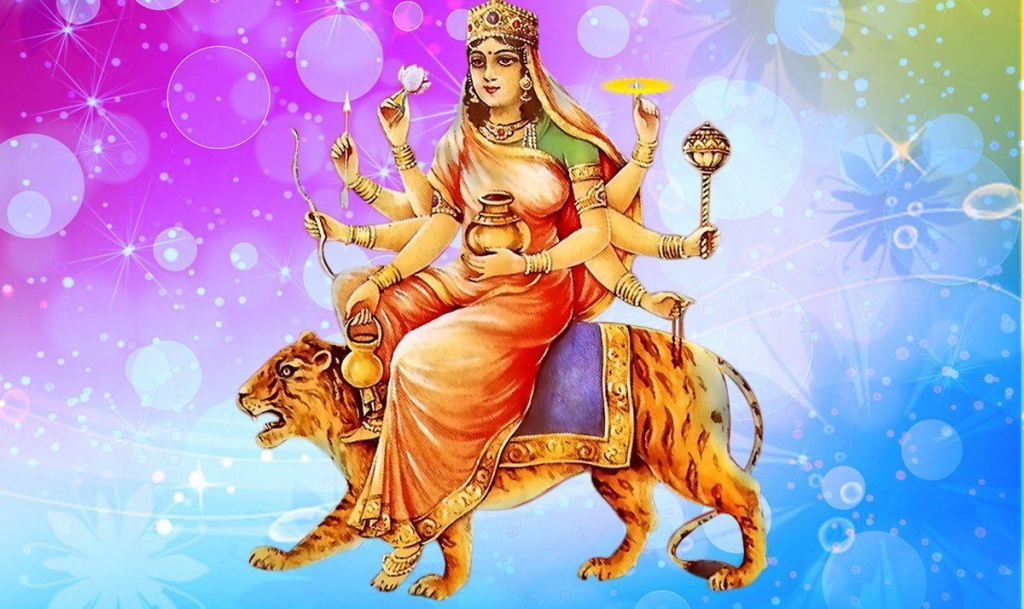 Kushmanda, also the Sanskrit word for ‘pumpkin’. Kushmanda is the one who created this universe. She governs the King of Planets, The Sun.

“Anda” means the Cosmic Egg or the Cosmic Sphere. “Ku” means tiny, “sh” means energy. So, from the smallest to the highest, energy pervades this entire Universe. It becomes big from small and it becomes small from big. It becomes a big fruit from the little seed, and from the big fruit, it returns to the seed.

This whole creation is like a big round ball or pumpkin, both the manifest and the unmanifest. This is where you have all sorts of diversity, from the smallest to the biggest. Kushmanda rules your Heart Chakra. 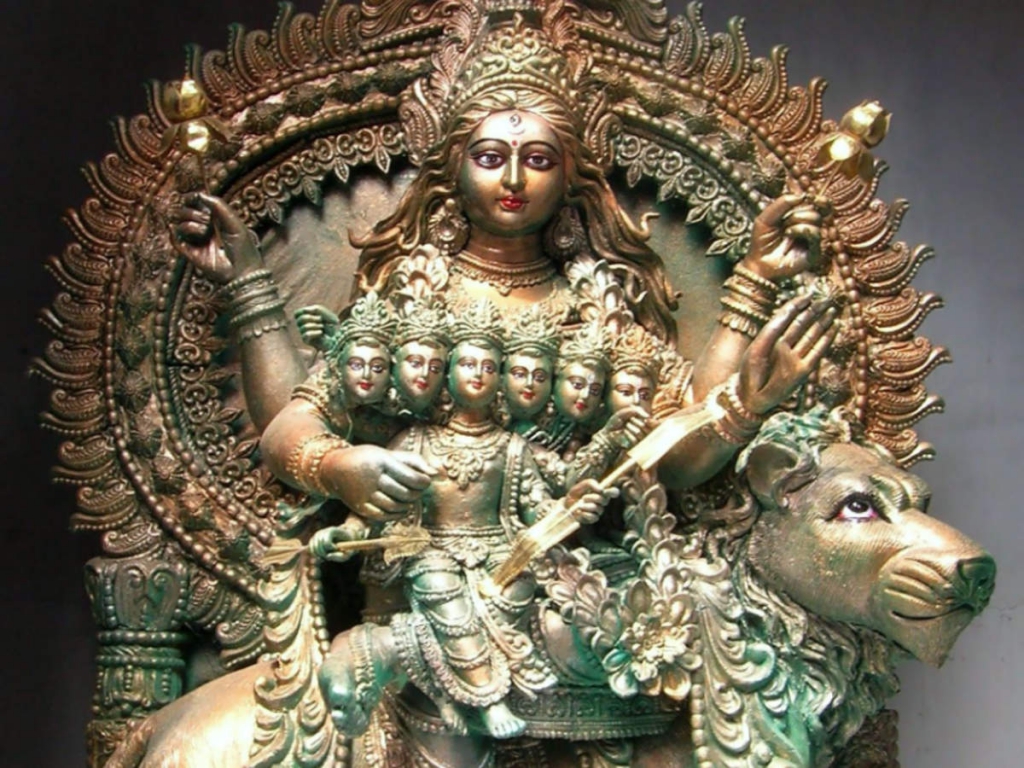 When you take knowledge-driven action, it is Skanda Tattva that manifests. And this form of Durga, the goddess is regarded as the mother of Skanda Tattva.

On this day yogis concentrate their mind and energy on Vishuddi Chakra (Throat Chakra.) 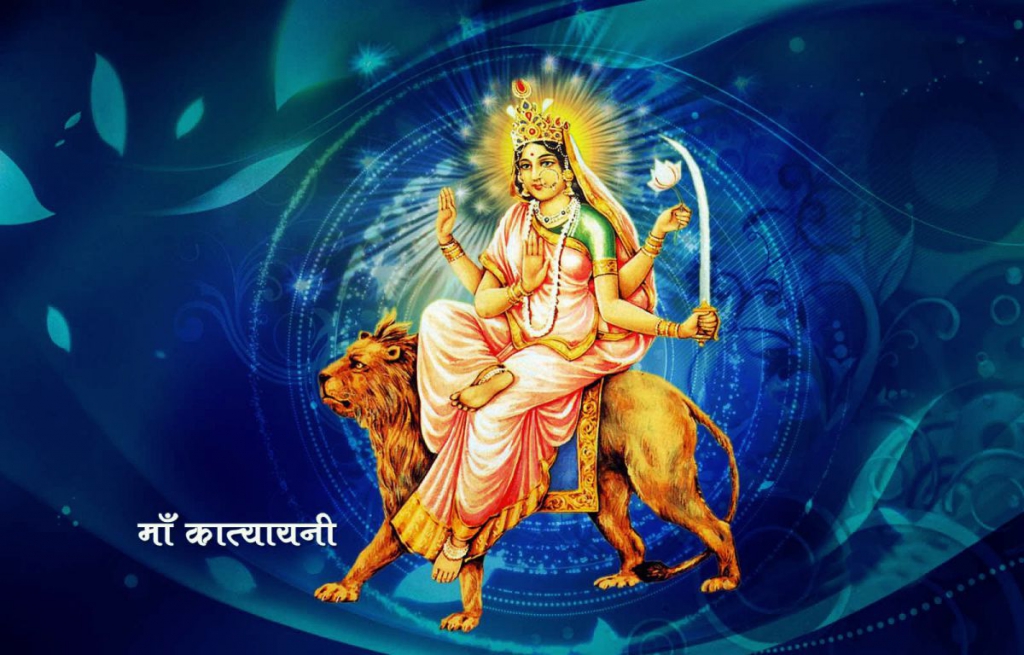 Katyayani who represents the deep and intricate secret of the Universe governs the fortune Planet, Jupiter. As his serene and caring daughter, Mother Durga was born to Sage Katya, impressed with his genuine devotion and worship for her.

She is known as the Warrior Goddess, the fiercest form of Goddess Durga, and is often referred to as Bhadrakali, Shakti, and Chandika. The anger that emerges in Creation to restore and revive the principles of Dharma and truth is also represented by Devi Katyayani. 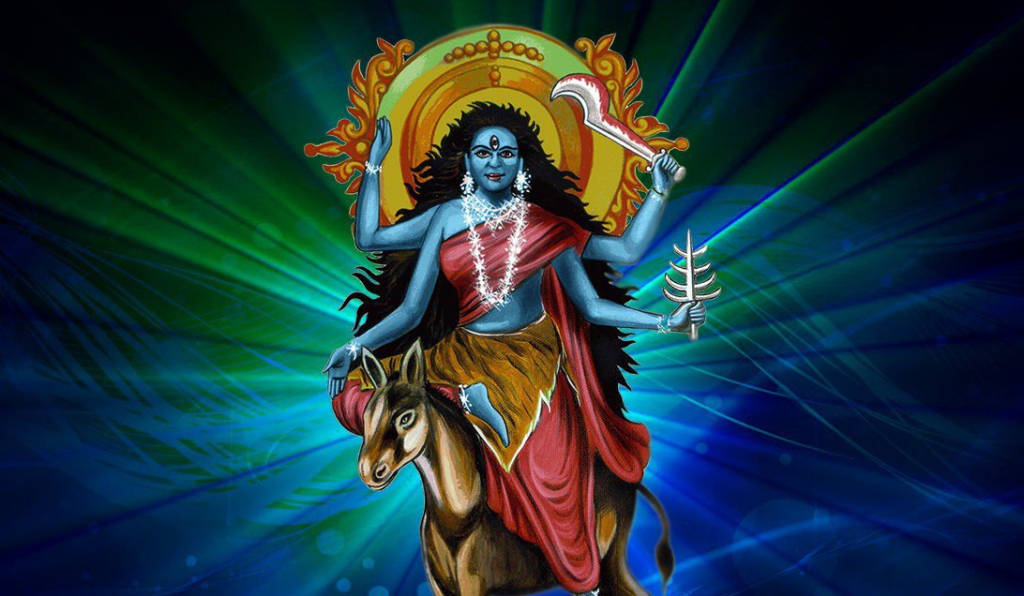 Kaalaratri, literally meaning the one who is as black as night. She governs the Karmic planet Saturn.

It is a very fierce and frightening form of the Divine Mother. There can be no more terrifying form in the whole of creation than this. This terrifying form has a maternal aspect to it. Jnana (knowledge) and Vairagya (dispassion) are the gifts from the Kaalratri form of the Mother Divine.

Yogi and Sadhaks penance on Sahasrara Chakra on this day. 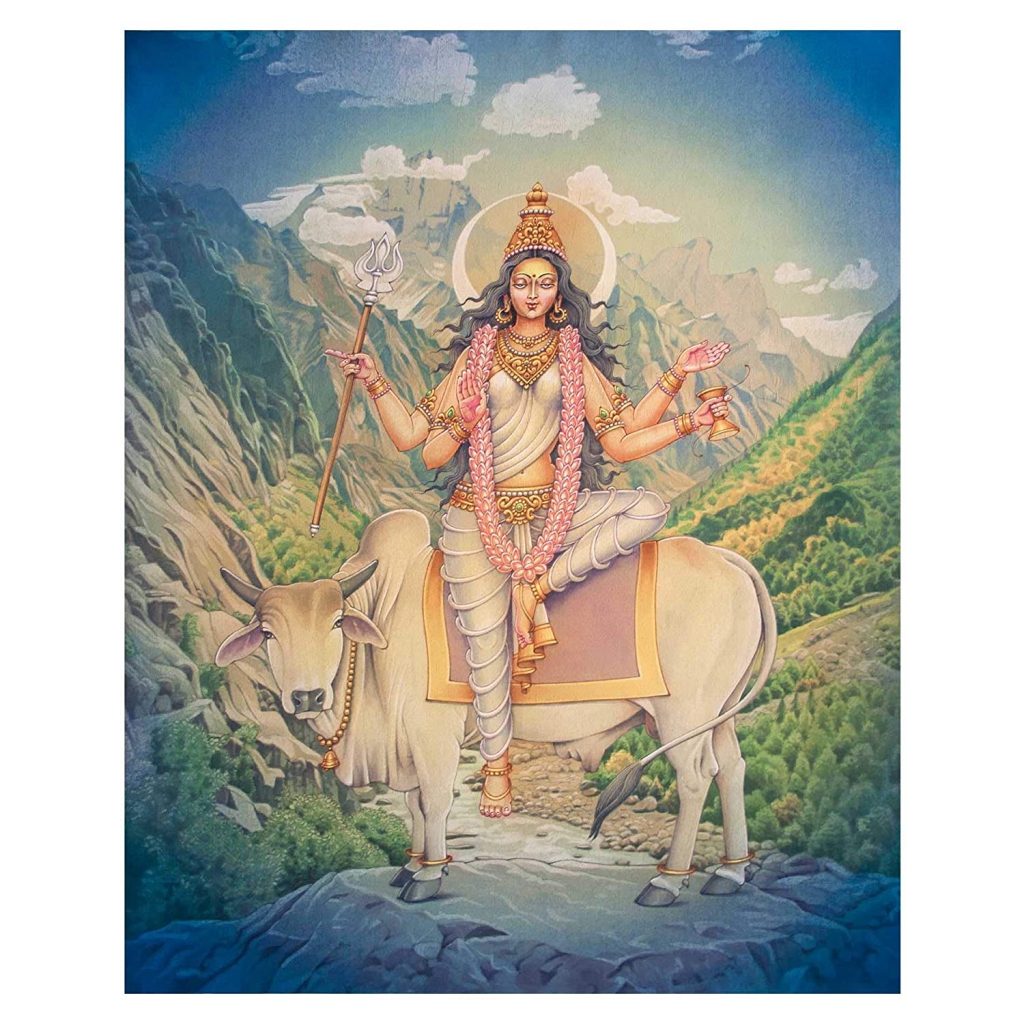 Maha Gauri, the beautiful and resplendent goddesses govern the Snake Planet, Rahu in astrology. Because of extremely white complexion, she is compared to the conch, moon, and the white flower of Kunda. She leads us to the path of virtue and self-realization.

Nature has two extremes. One of the forms is the most terrifying and devastating Kaalaratri, and Maha Gauri, on the other hand, which is the most beautiful and serene form of the Divine Mother.

She rules the final chakra of liberation. 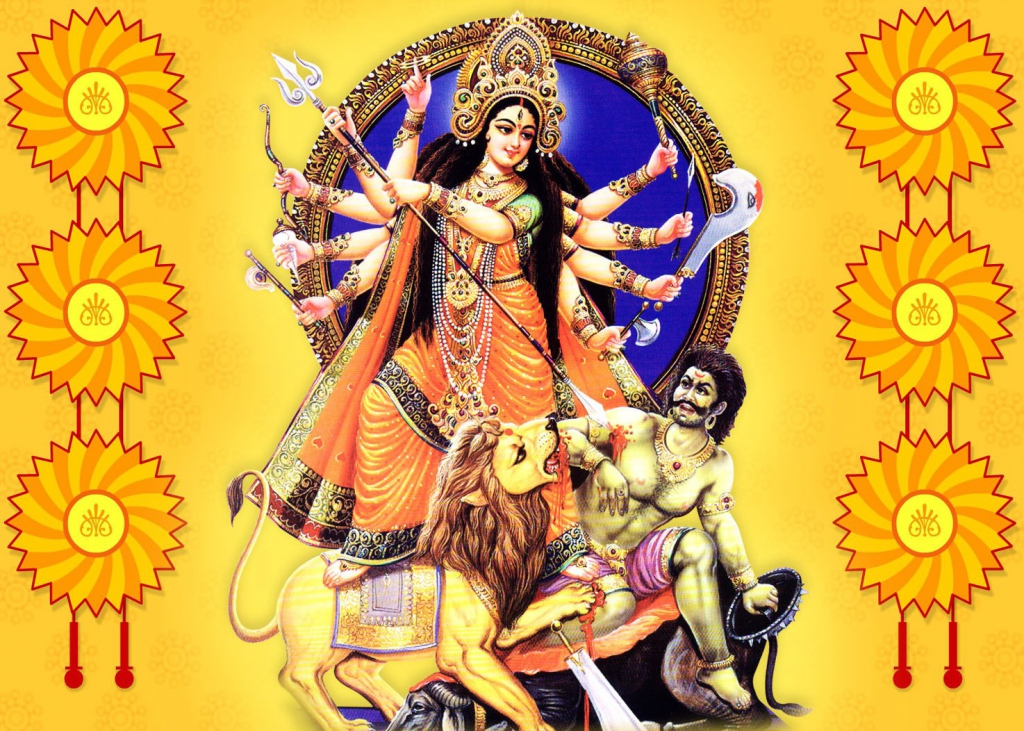 Siddhidhatri, who bestows the devotee with perfection in every activity governs the Enlightenment Planet, Ketu. She brings fulfillment and totality in every dimension of life.

Siddhi implies that even before the desire for it arises, you get what you need. To achieve something, you do not even need to work or act. At the simple thought of it, you are able to achieve what you want, without having to work or make efforts for it.

The most simple reason for fasting is:

when we stay on juice and vegetable fast during the Navaratri, our body becomes light, and is easy to stay in meditation and chant. And the detox happens, which is again an important part of Ayurveda. Fasting during Navaratri is also associated with Ritucharya (the discipline of seasonal change). Navaratri falls on the season of Autumn; when the fire element is dominant in our body. Also, Navaratri Diet (which includes fruits, clarified butter, starchy vegetables like sweet potato) brings down the fire element.