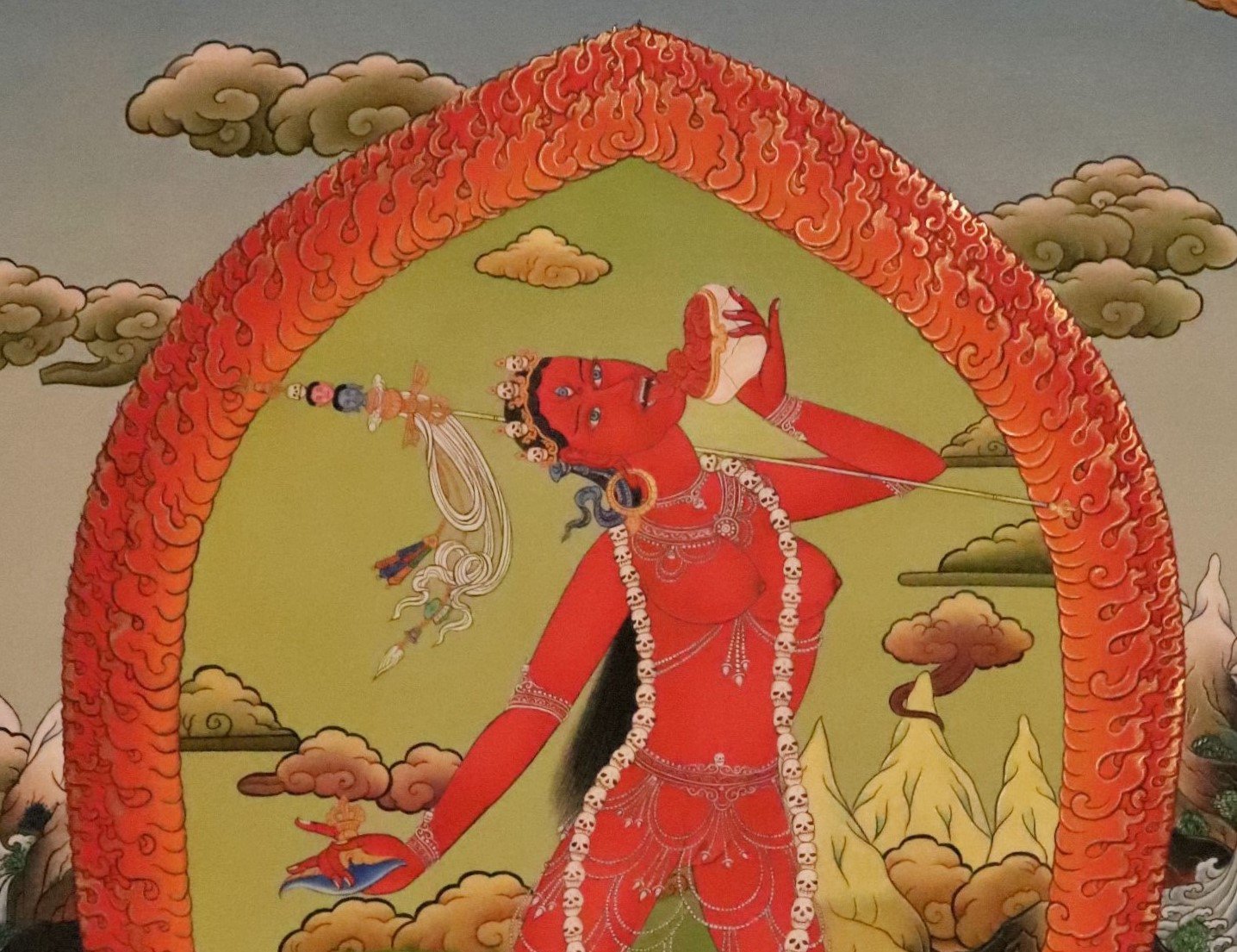 Vajrayogini is a tantric Buddhist deity who is also called as Vajravarahi in Tantric Buddhism, or Vajrayana, a tradition in which she is considered the supreme deity more revered than any male buddha. She represents the path leading to female Buddhahood.

She is also a dakini, a term that describes a female supernatural being or an accomplished yogini, and is considered the queen of the dakinis.

Her name comes from the Sanskrit, vajra, which means “diamond” or “thunderbolt,” and yogini is a female yogi or yoga practitioner. 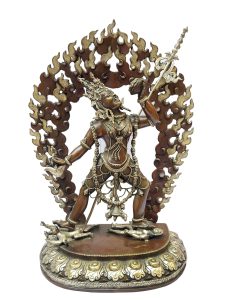 She is the goddess of grace and destruction, destroying illusion and the ego. She is typically depicted in fierce form, colored blood red.

She wears a necklace of skulls and holds a skull cup and flaying knife in her hands. Surrounding her are cremation grounds.

Symbolically, the necklace skulls represent the letters of the Sanskrit alphabet and purification of speech. The knife severs worldly attachments, while she pours bliss from the cup to devotees.

Vajrayogini’s yoga Tantra practice is believed to be a faster path to enlightenment. Traditionally, both mantras and practices of Vajrayogini are secret, even though many mantras are now widely available on the internet and in books. Traditionalists warn that only a qualified teacher can provide proper guidance for the use of these mantras.

Vajrayogini is an essence of “great passion” (maharaga), a transcendent passion that is free of selfishness and illusion. she intensely works for the well-being of others and for the destruction of ego-clinging.

She is seen as being ideally suited for people with strong passions, providing the way to transform those passions into enlightened virtues.

She is a meditation deity and her practice includes methods for preventing ordinary death, intermediate state (Bardo) and rebirth (by transforming them into paths to enlightenment), and for transforming all mundane daily experiences into higher spiritual paths. Practices associated with her are Chad and the Six Yogas of Naropa.

Vajrayogini is often described with the epithet sarvabuddhaa.

According to scholar Miranda Shaw, Vajrayogin is

“Inarguably the supreme deity of the Tantric pantheon. No male Buddha, including her divine consort, Heruka Cakrasamvara, approaches her in metaphysical or practical import.”

What are the different divisions of Vajrayogini?

There is the secret Vajrayogini that is none other than the primordial base of all sentient beings, the clear light mind that has been pure from the beginning.

In interdependence with that, there is the inner Vajrayogini a short A, or in this system a Vam syllable, in the middle of a triangular matrix of channel-knots at the navel.

In dependence on this, there is the co-emergent sambhogakaya Vajrayogini who abides in the Akanishta heaven, arising as an appearance of the outer nirvana and samsara.

Further, there are the field-born nirmanakaya that abide in the twenty-four, thirty-two, etc. sacred places of Jambudvipa.

Finally, all the women who abide in various countries and locations are the karma-born dakinis.

Vajrayogini/Vajravarahi ranks first and most important among the dakinis.

She is the “Sarva-buddha-dakini” the Dakini Who is the Essence of all Buddhas.

Although there are a number of visual representations of Vajrayogini, certain attributes are common to all: She is mostly shown as young, naked, and standing in a desirous or dancing posture.

She holds a blood-filled skull-cup in one hand and a curved knife in the other.

Often she wears a garland of human skulls or severed heads; has a khatvanga staff leaning against her shoulder; her usually wild hair flowing down her neck and back; her face in a semi-wrathful expression.

Her radiant red body is ablaze with the heat of the yogic fire and surrounded by the flames of wisdom.

Origin and Lineages of Vajrayogini

Varietals of Vajrayogini/Vajravarahi seem to be present in all schools of Tibetan Buddhism, for example, the Padmadakini/Yeshe Tsogyal in the Nyingma or the Khundrol-ma in the Bon tradition.

Here we focus on the forms of Vajrayogini as practiced in the New Translation or Sarma School (Kagyu, Sakya, and Gelug traditions) of Tibetan Buddhism.

These forms of Vajrayogini share the triple-Om mantra (with minor variations), are usually named Vajra-yogini or Vajravarahi, and can be traced back to one of the Indian mahasiddhas who lived in the 10th and 11th century, or to one of the Tibetan translators of the Sarma School like Marpa.

Vajrayāna Buddhism teaches that the two stages of the practice of Vajrayogini (generation stage and completion stage) were originally taught by Buddha Vajradhāra.

He manifested in the form of Heruka to expound the Root Tantra of Chakrasaṃvara, and it was in this tantra that he explained the practice of Vajrayogini.

All the many lineages of instructions on Vajrayogini can be traced back to this original revelation.

Of these lineages, there are three that are most commonly practiced:

In a general context, Indian texts (and also modern authors) often do not seem to distinguish between the terms “Vajravarahi” (Adamantine Yogini) and “Vajrayogini” (Vajra Sow) using both names interchangeably.

If used to indicate a specific deity, however, one has to differentiate.

Naropa did not pass on this particular practice lineage to Marpa but instead to the Phamtingpa Brothers from Parping (Nepal) who passed it on to the Sakya tradition from where it came later to the Gelugpas.

Vajrayogini in the Kagyu Tradition

The various Kagyu lineages of Vajravarahi (often translated as “Vajrayogini”) go back to Tilopa, Naropa, and Marpa.

A number of modern Kagyu teachers, like Chogyam Trungpa and H.E. Garchen Rinpoche, have stressed the importance of this practice.

With a semi- wrathful expression on her face, she is red in color, has three eyes and dark yellow hair flowing upward, at the crown a boar’s head.

The right-hand holds up a curved knife and the left a white skull cup at the heart.

At the bend of the left elbow stands an upright khatvanga staff. She is adorned with a tiara of gold and five white skulls, green ribbons and gold and jewel earrings, a garland of fifty fresh heads, a garland of flowers,

a bone necklace, girdle, bracelets, and anklets, she wears a long green scarf around the shoulders.

With the right leg raised in a dancing posture, the left presses on a sun disc atop a prone figure.

Above a moon disc and pink lotus seat, she is completely surrounded by the tight curling flames of orange pristine awareness fire.

Vajrayogini in the Sakya Tradition

Although Naropa’s Vajrayogini is the principal practice all three forms are still alive and part of the Thirteen Golden Dharmas of the Sakyas.

Since all three dakinis are red in color they are also called the Three Red Ones (Tibetan: dmar-mo skor-gsum).

The Vajrayogini practice ranks most important and is very much alive in the Sakya tradition to this very day.

Over the centuries there have been various expositions of this system, most prominently the Eleven Yogas of Vajrayogini by Jamyang Khyentse Wangchuk (1524 – 68 C.E.) who also wrote an extensive commentary on the practice.

This commentary is the basis for the 7-day teachings given by the highest contemporary Sakya teachers like H.H. Sakya Trizin and H.E. Jetsun Kusho-la.

During those teachings, some participants are also introduced to additional, most secret practices not contained in the common sadhana.

The Vajrayogini initiation is only given to aspirants who have been previously introduced to the Hevajra or Chakrasamvara mandala (Highest Yoga Tantra initiations).

Vajrayogini in the Gelug Tradition

There is no evidence for this since the Gelugpas had paid attention to Vajrayogini/Vajravarahi only as of the consort of Chakrasamvara being one of their three principal yidams.

To this very day, Vajrayogini is not part of the canonical teaching curriculums at the tantric colleges.

Only as late as in the 18th century the Sakya transmission of Naropa’s Vajrayogini seems to have been introduced to the Gelug tradition.

From then on the Gelug and Sakya Vajrayogini lineages are separate from each other.

It was Phabongkha Rinpoche (1878 – 1941 C.E.) who recommended and promoted the Vajrayogini practice as the main meditational deity of the Gelug tradition.

So did the next generation of lamas like Lama Yeshe, Lama Zopa, Geshe Kelsang Gyatso, Geshe Tharchin, Gehlek Rinpoche, just to name a few.

Today the Vajrayogini practice has become very popular with teachers and students.

Like in the Sakya tradition aspirants have to take a full Highest Yoga Tantra empowerment before they can receive the Vajrayogini initiation. 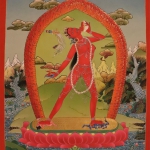