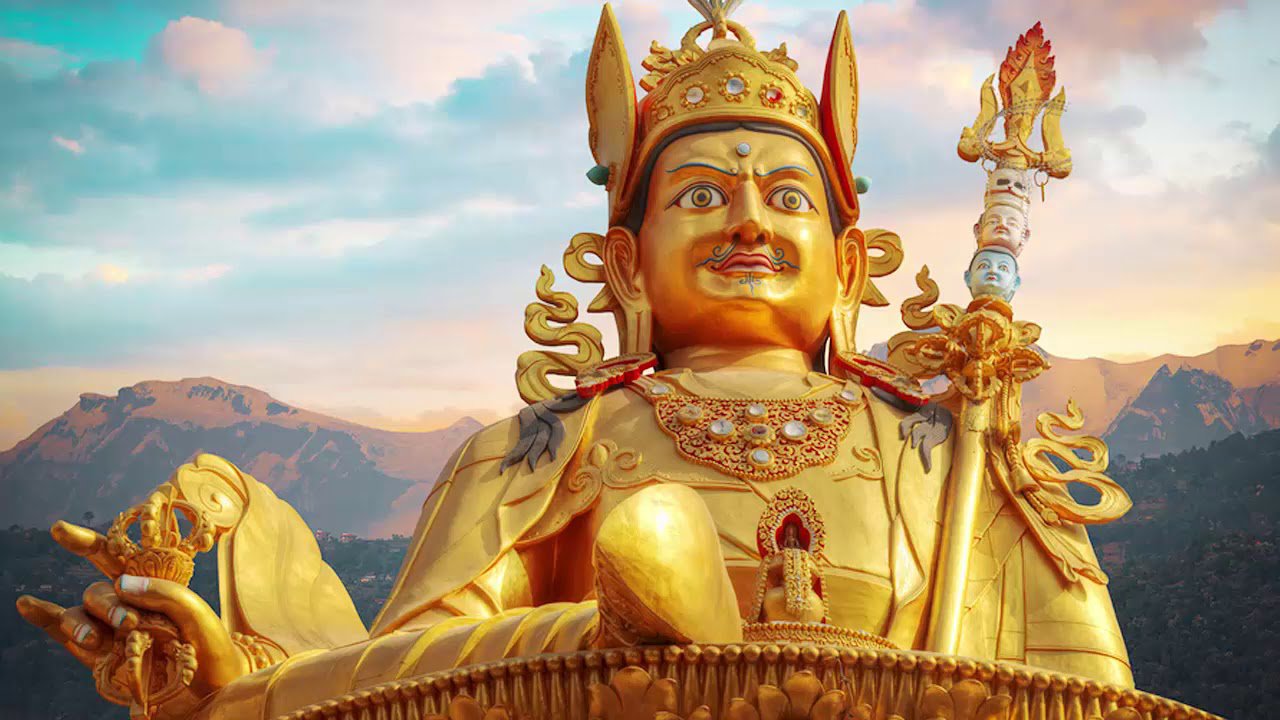 For 2,500 years Buddhists have considered with awe the achievement of Siddhartha Gautama. What induces such tremendous respect in them is not just that he gained Enlightenment, but that he did so without a teacher. Contemplating the difficulties that the Buddha had to overcome has given Buddhism a very great appreciation of the value of a spiritual teacher.

As Buddhism developed, and the three yanas unfolded, the role and significance of the spiritual teacher changed. In the first two yanas, the teacher may act as a preceptor, responsible for introducing you to the Buddha way, or as a kalyana mitra – a spiritual friend. The Kalyana Mitra is like an older brother or sister in the Dharma, who helps, advises, and encourages.

In the Vajrayana, the teacher transforms into the vajra guru. The relationship with a Tantric teacher is a samaya, or bond, at least as binding as that between the meditator and the Buddha or Bodhisattva that he or she visualizes. In Tantra, it is said that all blessings spring from the guru. The relationship is more like that of a doctor with a patient who desperately wants a cure and has total belief in the doctor’s method.

The guru is a vajra guru partly because everything in the Tantra is vajra everything is seen as an expression of the ineffable Reality of which the vajra is the chief Tantric symbol. The vajra prefix implies that the guru embodies Reality. He may formally teach the Dharma or he may not. However, just what he expresses Reality. His being and mode of living are themselves teachings.

For his disciple, the communication of the Tantric guru may come as a thunderbolt. The vajra guru is spiritually ruthless. He is the teacher who will stop at nothing to awaken his disciple from the slumber of samsara. There are many stories in the Tantra, as in Zen, of gurus using drastic methods to get through to their disciples.

For the Tantric disciple, the guru’s kindness can never be repaid. Through initiation, the guru bestows practices which can propel the student rapidly to Buddhahood. The guru is the source, the fountainhead, of all his or her development. In fact, for the Tantra, particularly Highest Tantra, the guru is a Buddha.

Ideally, the guru should be Enlightened. Tantric initiation partly symbolizes the empowering of a far-advanced Bodhisattva with the full qualities of an Awakened One. Most gurus fall a long way short of full Enlightenment. Nonetheless, the Tantra is concerned with finding correlates in actual experience for the highest values of the spiritual path.

In effect, If you are not in direct contact with a Buddha, who in your present experience comes closest to that level?’ The answer is, of course, your guru. So the guru becomes what is called the ‘esoteric’ Buddha Refuge. It is esoteric not in the sense of secret, but because it is not an experience that everyone can share. It is only if you enter into a close, devoted relationship with a teacher that he begins to function as a Buddha Refuge for you.

It is also esoteric in the sense that it depends on an inner mental effort to see the guru in this way. Having received Tantric initiation from a teacher, the initiate is urged to make every effort to see the teacher as a fully Enlightened Buddha. He or she must disregard any apparent faults they may perceive in him or, rather, should attribute them to the impurity of their own mind.

The Tantra holds firmly to the view that mind is king. If you see the guru as an ordinary person, you will receive the blessing of an ordinary person. If you see him as a Buddha, for you he will act as a Buddha, and your relationship with him will lead you quickly to Enlightenment. Each school of Tibetan Buddhism has certain teachers whom it particularly reveres as the founders of its school, or for starting a particular lineage of teaching or initiation. Although they are historical figures, over the course of time they have taken on an archetypal significance.

Padmasambhava (Aka The Lotus-Born Guru)

Padmasambhava was instrumental in establishing Buddhism in Tibet in the eighth century. At that time King Trisong Detsen wanted to strengthen Buddhism but was faced with fierce opposition from the Bonpos – followers of the indigenous shamanistic religion, led by a minister called Ma Zhang. A Buddhist abbot called Santaraksita was persuaded to come from Nepal, but though he achieved a certain amount, he could not overcome the Bonpos single-handed. They had been using witchcraft against him, so he recommended that the king invite Padmasambhava who, as well as being a master of Buddhist scholarship, was also a siddha, an adept in the psychic powers engendered by Tantric meditation.

Padmasambhava came to Tibet, and the great monastery of Samye was built with his assistance. He is represented subduing the local deities of Tibet by his magic power, and binding them by oath to be servants and protectors of the Dharma.

There exists a truly extraordinary biography of Padmasambhava called The Life and Liberation of Padmasambhava. It describes how he is born as an emanation of the Buddha Amitabha, appearing spontaneously in a lotus on a lake in the country of Uddiyana. He is brought up by the king of that country as though he were his own son. Then, deciding it is time to leave the worldly life, he goes forth as a bhikshu. He studies all aspects of Buddhism, as well as medicine and astrology.

Next, he spends years meditating in all the great cremation grounds of India and the Himalayas. We are given graphic descriptions of the unspeakable horrors of these places. They are symbols for the endless fearful sufferings of conditioned existence itself.

Yet in all these places Padmasambhava meditates unafraid and converts the dakinis – who, if you understand the text literally, are flesh-eating demonesses. In a cemetery called Mysterious Paths of Beatitude, he is initiated by an Enlightened dakini and receives supreme knowledge. 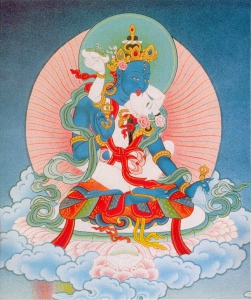 Padmasambhava has many forms, including an important set of eight which are frequently represented in Tantric art. First, there is simply the form known as Padmasambhava. He sits wearing the three robes of the monk, and a red cap.

Behind him to one side is a basket, a container representing the nourishment of the spiritual food of the Tripitaka (the ‘three baskets’ of the sutras, the vinaya, and the abhidharma). In some representations he is given Tantric attributes, holding a vajra and skull cup, and with an adept’s staff held at his left side.

Padmasambhava next manifests as Guru Sakya Senge (‘lion of the Sakyas’) or as Sakyamuni himself. In this form, he appears in the way that Sakyamuni is usually represented: holding a begging-bowl, wearing the three yellow monastic robes, and golden yellow in complexion.

Through this manifestation and the previous one, he embodies the whole Buddhist tradition based on the sutras. This form also emphasizes the fact that Padmasambhava is described as a ‘second Buddha’ by his devotees.

Next, however, he appears as Urgyen Dorje Chang (also known as Tshokyi Dorje). In this form he is deep blue in color, adorned with silks and jewels, holding a vajra and bell. He is locked in an ecstatic sexual embrace with a consort, whose body is pure white. She holds a skull cup filled with ambrosia uplifted in her left hand. Here he embodies the whole Vajrayana tradition, whose source is said to be Vajradhara (or Dorje Chang in Tibetan).

In summary, we can say that these different manifestations mark Padmasambhava as the embodiment of all the resourcefulness of Buddhist teaching. They show him as the typical Tantric guru – working through logic and reasoning to convert the rational mind, but also diving deep into the psychic depths to confront, subdue, and transform the powerful and primitive – perhaps even demonic – energies that inhabit those dark realms.

Manifestation as a king of Zahor

Though we have looked at so many forms, we have yet to meet Padmasambhava in his most frequent manifestation, as a king of Zahor. In a sense, you most truly meet a vajra guru when you receive initiation from him. So we shall try to venture out into the unknown to meet the Precious Guru, and be empowered with his knowledge, power, and compassion. We shall ask him to grant us siddhi, both mundane powers and the supreme siddhi of Enlightenment. These powers are emphasized in Padmasambhava’s mantra: “om ah hum vajra guru Padma siddhi hum”.

To meet him we have to go to the place of initiation, to enter his secret realm. His realm, in which he flies like a great eagle, is the blue sky of sunyata. Initiation can only take place if we let drop our barriers and habitual ways of being, forsake our own territory, and enter the state of spiritual openness.

He is dressed in robes. The outermost is a beautifully decorated red cloak. This symbolizes the Mahayana. It is outermost because it is love and compassion which the Precious Guru offers to the world in all situations. Beneath the red cloak he wears the yellow robes of a monk – showing that though he follows the Tantric path beyond conceptual distinctions of right and wrong, he keeps pure his ethical discipline. He has not abandoned the basics of Buddhism but simply carried them up into a higher vision.

Beneath these, he wears a blue robe. Blue was the royal color in ancient India. It became associated with the Tantra, as it incorporated much of the symbolism of royalty into its ritual. For example, we have seen that the Tantric initiation procedure in which the initiate is sprinkled with water from an initiation vase by the guru parallels the ceremony of anointing a king. So the blue robe which Padmasambhava wears, most hidden and closest to his heart, symbolizes the Vajrayana. 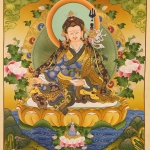