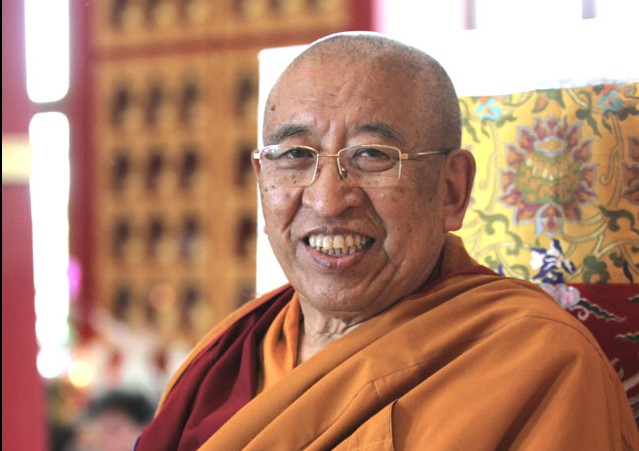 Thrangu Rinpoche was born in Kham in 1933. At the age of five, he was formally recognized by the Sixteenth Karmapa and the previous Situ Rinpoche as the incarnation of the great Thrangu tulku. Entering Thrangu monastery, from the ages of seven to sixteen he studied reading, writing, grammar, poetry, and astrology, memorized ritual texts, and completed two preliminary retreats. At sixteen under the direction of Khenpo Lodro Rabsel, he began the study of the three vehicles of Buddhism while staying in retreat.

At twenty-three he received full ordination from the Karmapa. When he was twenty-seven Rinpoche left Tibet for India at the time of the Chinese military takeover. He was called to Rumtek, Sikkim, where the Karmapa had his seat in exile. At thirty-five he took the geshe examination before 1500 monks at the Buxador monastic refugee camp in Bengal and was awarded the degree of Geshe Lharampa. On his return to Rumtek, he was named Abbot of Rumtek monastery and the Nalanda Institute for Higher Buddhist studies at Rumtek. He has been the personal teacher of the four principal Karma Kagyu tulkus: Shamar Rinpoche, Situ Rinpoche, Jamgon Kongtrul Rinpoche, and Gyaltsab Rinpoche.

Thrangu Rinpoche has traveled extensively throughout Europe, the Far East, and the USA and is the abbot of Gampo Abbey, Nova Scotia, Canada. In 1984 he spent several months in Tibet where he ordained over 100 monks and nuns and visited several monasteries. In Nepal Rinpoche has also founded a monastery, Thrangu Tashi Choling in Bodhanath, a retreat center and college at Namo Buddha, east of the Katmandu Valley, and has established a school in Bodhanath for the general education of lay children and young monks. He also has built-in Katmandu Tara Abbey offering a full dharma education for nuns. He has also completed a beautiful monastery in Sarnath, India a few minutes walking distances from where the Buddha gave his first teaching on the Four Noble Truths. Presently, Rinpoche has begun planning a retreat center for his Western students in Colorado, USA.

Thrangu Rinpoche has given teachings in over 25 countries and is especially known for taking complex teachings and making them accessible to Western students. Thrangu Rinpoche is a recognized master of Mahamudra meditation.

More recently, because of his vast knowledge of the Dharma, he was appointed by His Holiness the Dalai Lama to be the personal tutor for the 17th Karmapa.