Before the introduction of Buddha images, the wheel was a common symbol in early Buddhist art. In those days, the Dharmachakra symbolized not only the Buddha’s teachings but the Buddha himself.In the Lumbini, Nepal there is the Ashoka Pillar built by Emperor Ashoka, where four carved lions and four-wheel face four direction to proclaim the Buddhism throughout the world.

Today, in every Buddhist culture there is the appearance of Dharmachakra as the art. On images of the Buddha, the wheel appears on the palms of his hand and the soles of his feet, where it is one of the 32 Marks of an outstanding Man. It is one of the Eight Auspicious Symbols which is especially prominent in Tibet.

The dharma wheel has eight spokes and those spokes represent Eightfold Path of Buddha. There are three components of the wheel. They are a hub, spokes, and rim. They symbolize the three aspects of the Buddhist teachings upon integrities, wisdom, and attentiveness. The central hub represents ethical discipline, which centers and stabilizes the mind. The sharp spokes represent wisdom or discriminating awareness, which cuts through ignorance. The rim represents meditative concentration, which both encompasses and facilitates the motion of the wheel.

A wheel with a thousand spokes, which emanate like the rays of the sun, represents the thousand activities and teachings of the Buddhas. A wheel with eight spokes symbolizes the Buddha’s Eightfold Noble Path, and the transmission of these teachings towards the eight directions.

When four swirls are depicted they usually correspond to the four directions and elements and symbolize the Buddha’s teachings upon the Four Noble Truths. The rim of the wheel may be depicted as a simple circular ring, often with small circular gold embellishments extending towards the eight directions.

Use of Dharma Wheel

The wheel is usually central to mandalas, geometric representations of the Buddhist universe. It also appears in the Dharmachakra Mudra, in which the Buddha forms a wheel with the position of his hands. 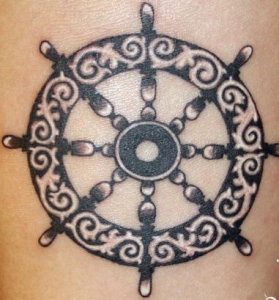 The Dharma wheel is usually central to mandalas which gives geometric representations of the Buddhist universe. It also appears in the Dharmachakra Mudra, in which the Buddha forms a wheel with the position of his hands. Today there is the fashion of Dharma wheel tattoo. As they called it as healing process tattoo. This design came from the idea of Dharma Wheel. Dharma Wheel is being popular to tattoo artist because of its a good balance to the tattoo.