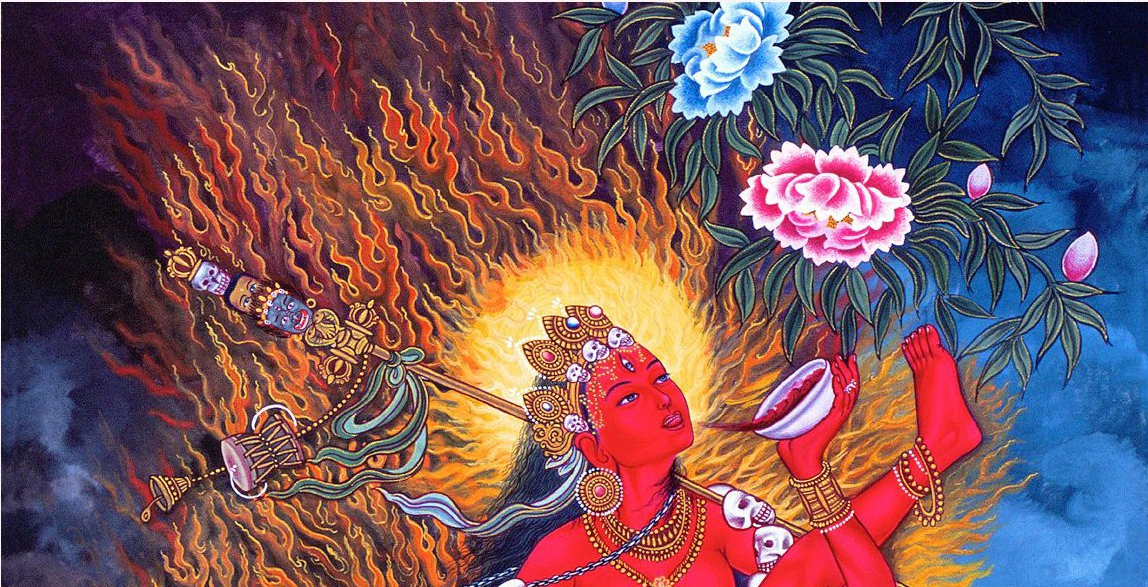 The Tibetan tantric yoga learning and practice is not like the regular yoga practiced in the West. It is a art of rLung and exercise of the mind purely based on spiritual growth, a tantric tradition of master Pundit Naropa and Lama Marpa Lotsawa.

It removes the negative omens from the channels and chakras by physical positions and movements which harmonize wind and mind. The yoga practice helps stimulate the channels and chakras, and gives an experience of awareness of the mind and its function. The rLung regulates the body and the natural function of the energy, and the visualization of the divine Buddha Vajrayogini blesses the body/mind and transforms it into the pure state of Buddha nature.

The benefit of the yoga practice:

Marpa Lotsawa (1012-1096), one of the substantial masters of Tibet, went to India multiple times and gained many learnings of Buddhists sutras and tantras and secret tantric practices from the great Indian guru Naropa, and others.

Especially he gained Naropa’s six dharmas or yoga practice, returned to Tibet and introduced it. He also interpreted numerous sutras, tantras, and medical texts, and brought in a new tantric practice in Tibet (Sarma tradition). F

rom it, the age of the new tantric practice of Kagyupa and Gelukpa schools began. Especially he refined his tradition of meditation and the Naropa’s yoga tantra.

The six yogas are:

Marpa Lotsawa taught Naropa’s six Dharmas or yogas to his followers including Milarepa, Tsurton, Lama Ngogpa. He became the founder of the yogi practice and meditation practice in Tibet, and a great educated master who nourished the pure lotus of Milarepa (1053-1135) and enlightened his mind.

From his coaching, a great number of school of yogas grew in Tibet. The present practice of Naropa’s six yogas came from the belief of Pal Phagmogrubpa, the master who belonged to the Phagdru Kagyudpa order and from whom Lama Tsongkhapa received and defused it in the Gelukpa school.

There is a great number of secret practitioners of Gelukpa schools, and especially a secret tradition of Gelukpa Wensa Nyengyud tradition of meditation, who practice Gadhen Chagya chenpo or Gelukpa great mahamudra practice. Yoga is one of these secret practice to transmute the unenlightened mind into the pure state of  Buddhahood.

There are two popular yoga schools in Tibet. They are Zhalu and Drigung Phowa chenmo monasteries. They select the right person who takes part and give rLung yoga schooling for twelve years. The training initiates every monkey year (after 12 years) and terminates in the next monkey year.

The rLung practitioner (yogi) uses special colored clothes to improve the power of the Tummo fire. The yogi should follow strict training and order according to the tradition. Every winter of the 12 year or monkey year, during the coldest season in Tibet, all the trainees should demonstrate their technique and power of the rLung/wind meditation exercises.

The learners, with lotus posture, jumps up from inside of the training room and goes out through the roof of the house from a half-foot square open window without leaving the posture. The practioners also should melt the iced Yak leather by Tummo heat power.

The practitioner should make a great journey in certain areas of Tibet by wind power (which gives extremely fast walking) and should return to the base in due time. The successful trainee will receive the title of master in Tibetan yoga, rLung-gompa, by the monastery.

Yoga For The Health

Generally all yogis and serious Dharma followers among the monks, nuns and lay people practice Tibetan yoga. It has been very little known in the public health field, neither by spiritual gurus nor lay people. The reason is simple as this method of exercise shouldn’t transform into a method of earning a living instead of an philanthropist purpose.

However, many yogis have helped the victim suffering from the different diseases with yogic practice and techniques. There are more than one hundred yogic approach that can heal the sufferings mentioned in the yoga practice of the different schools.

Especially they can reduce the disturbed negative rLung flow and its works in and outside of the body. The yoga tantra says that the consciousness and energy flows in the path, which is of importance for the life, and complements to the universal solar and lunar rotations.

Breathing is the basic technique, which brings link between the universe, man and the energy circulation. The quite wind that flows in and out is the life of the beings and is said ‘life span wind’, Sok-rLung. The Kumbaka-Vase, rLungBumpacen, yogic method can regulate the decrease ofthe life span wind flow.

Vajra body introduction in yoga, it is very important to know more about ourselves, how we are, and how we function. This knowledge gives us a rigid knowledge of the vajra body and how it glows our mind without clinging to the ‘illusion body’, Gyu-mei-lue.

The human body is basically made up of five components which are:

The above mentioned five components are usually in the state of energy and silent form inside the channels and revolves through the body, minute by minute, by the wind power. Each component has the capacity to support the mind and mental awareness in order to keep the body mandala in a healthy system.

Yoga tantra says that paths are like a house and the quite wind and mind are like its owner. These two elements give the right elements of the basic structure of the body/mind. It also says that wind is the transporter of the mind and the thikle is like a treasure.

The temperature is a energy which controls the body heat. The flow of these energies doesn’t stop from the birth till the death and remains the lightening of the body/mind.

Tsa, ‘channel’ means empty tube where blood, wind and mindfulness can pass freely, for example body cavities such as blood vessels, the mouth and empty organs. Tsa is a emblem of space, and it gives space to the awareness and other elements of body/mind to constitutes themselves under transcendental and dualistic forms and colors. It is like a house for the consciousness. The space is limitless therefore its symbolic sign is the zero. Everything exhibits from this zero or space and also dissolves into it.

Second is rLung, the wind element. It is a quite wind, which is collected from space particles. Wind has a light, quite and mobile nature and is the carrier of the awareness. Therefore it is called here ‘the vehicle of the mind’ as it carries the mind and the secondary consciousnesses which perceive the perceptions to the objects.

It maintains the body system and gives life and micro vitae to the body. The mind and wind are one in two aspects and they work together. These two elements have the analogy of a blind horse and a man without legs. Each alone can’t do normal function but they can do complete work if they are together.

The psychic heat Drod is produced by the space particles and the heat manifested from the friction ofthe wind element. This is another basic element as it supports and gives energy to the consciousness, like the power of the fire that can lift rockets to space.

The power is known as medrod or ‘digestion fire’ in medicine and Tummo in yoga tantra. The heat (fire) exists life and protects the body/mind. This psychic fire increases the wisdom, burns the unaware part of the brain and gives realization and freedom from the darkness of unawareness.

That is why yoga describes Tummo as the aggressive fire which ignites from the below navel, pierces the chakras one by one and reaches the sky of the crown chakra.

Thikle or ‘essence drop’ is the energetical earth and water elements manifested from the space particles and fire element.  The Thikle supports the mind like a fuel energy.

There are two different types of the Thikles: Dhang and common Thikle. Dhang lives in the heart and produces radiance which shines to all parts and surface of the body, mainly in the face, chest and forehead.

From this glow an aura or body light is formed and defends the body/mind from the negative external energies. Thikle is a pure state of material energy and the highly purified substance called ‘treasure of the body’.

Namparshepa, ‘mind’ or ‘consciousness’, is the owner of the body and lives in the center of the heart energy. It controls the body/mind and experiences the positive and negative karmas that carry this life to the next.

Six awareness are generally mentioned: eye, ear, nose, tongue, body and mind consciousnesses. They are like the palm of a hand with its fingers, which closes to the center every night and opens in the dawn. Depending on the philosophical schools, eight awareness can also be noticed. The two added are Kunshi and the ‘mental affliction mind’.

Kunshi is the base of all mind and mental works, while the ‘mental affliction mind’ is a mind veiled by negative emotions. Both are in the mental awareness. The function of the sensory consciousnesses is to get images, sounds, tastes, smells, touches and general thoughts and to understand and recognize them by shepa or consciousnesses.

Yoga Of The Elements

The Yoga aspect meditation is a special yogic form used to purify our basic five elements and re-balance the body/mind and energies. It is a method of envision of space and the other elements and their colors one by one, and purifying one’s own body, organs, channels, consciousness, subtle wind energies, and subtle and gross bodies through mental exercises.

The instructor mentors the practice with verbal instructions while participants listen to the instruction and heal themselves through the elements visualization. 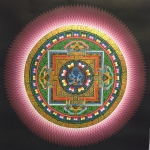 In the center of the mandala we can see the Buddhist deity, blue in color 6 armed and 3 face.
Buy Lotus Mandala Online