Dharmachakra Mudra a Symbolic Gesture in Buddhism and Hinduism

First of all, mudra is the Sanskrit word for “gesture,” “mark,” or “seal,” is a symbolic gesture in Buddhism and Hinduism.

What is the meaning of Dharmachakra Mudra?

Dharmachakra Mudra is called as the gesture of Teaching of the Wheel of Dharma that describes one of the most important moments in the Buddha’s life.

Buddha performed the Dharmachakra mudra in his first sermon in Sarnath after he attained enlightenment. It is performed with the help of both the hands which are held against the chest, the left facing inward, covering the right facing outward. This event is often referred to as the setting into motion of the Wheel of the teaching of the Dharma.

What is the position of fingers and thumb in Dharmachakra Mudra?

In this mudra, the thumb and index finger of both hands touch at their tips to form a circle. This circle represents the Wheel of Dharma, or in metaphysical terms, the union of method and wisdom.

The three remaining fingers of the two hands remain extended. These fingers are themselves rich in symbolic significance.

The three extended fingers of the right hand represent the three vehicles of the Buddha’s teachings, namely:

The three extended fingers of the left hand symbolize the Three Jewels of Buddhism, namely, the Buddha, the Dharma, and the Sangha.

Significantly, in this mudra, the hands are held in front of the heart, symbolizing that these teachings are straight from the Buddha’s heart.

Where is the Dharmachakra Mudra is displayed?

This mudra is displayed by the first Dhyani Buddha Vairochana. Each of the Five Dhyani Buddhas is associated with a specific human delusion, and it is believed that they help mortal beings in overcoming them.

Thus, Vairochana is believed to transform the delusion of ignorance into the wisdom of reality. By displaying the Dharmachakra mudra, he thus helps adepts in bringing about this transition.

What are the variants of the Dharmachakra mudra?

There are many variants of the Dharmachakra mudra such as the ones in the frescoes of Ajanta in India where both the hands are separated and the fingers do not touch each other.

In the meantime, in the Indo-Greek style of the Gandhara Buddha statues, the right fist overlooks the fingers joined to the thumb on the left hand.

And in the Japanese Horyu-ji pictures, the right hand is seen to be overlapped on the left.

In the same way, the Amitabha Buddhas originating before the 9th Century in Japan are also seen using the Dharmachakra mudra.

What is a step by step procedure to form Dharamchakra mudra?

The step by step procedure is explained below:

1) Bring both of your hands in front of your chest.

2) Keep your right hand somewhat higher than the left.

3) Now join the thumbs and index fingers of each hand.

3) The palm of your left hand should face your heart.

4) The back of your right hand should face your body.

5) The left middle finger touches the place where the thumb and index finger of the right hand form a closed circle. A must read the post – Varada Mudra for pacifying past thoughts

6) While forming this mudra, breathe slowly and very deeply.

7) Now bring your focus on how the three fingertips are touching each other.

What is Dharmachakra Mudra mantra?

When making the Dharmachakra mudra, repeat this mantra, or verse that holds meaning, slowly and intentionally. Allow the energy of the mudra and the power of the mantra to penetrate ever more deeply.

“May I set into motion the wheel of dharma.”

There are many benefits. This mudra is generally practiced with padmasana to attain maximum benefits.

These are the statue of brass and wood of Buddha in Dharmachakra mudra. The Buddha is in the dharmachakra mudra which is the hand position he took for his first sermon after his Enlightenment in the Deer Park at Sarnath, India. He is seated in the padmasana or full lotus position with the soles of both feet facing upwards. His robes cover his left shoulder leaving his right shoulder bare. 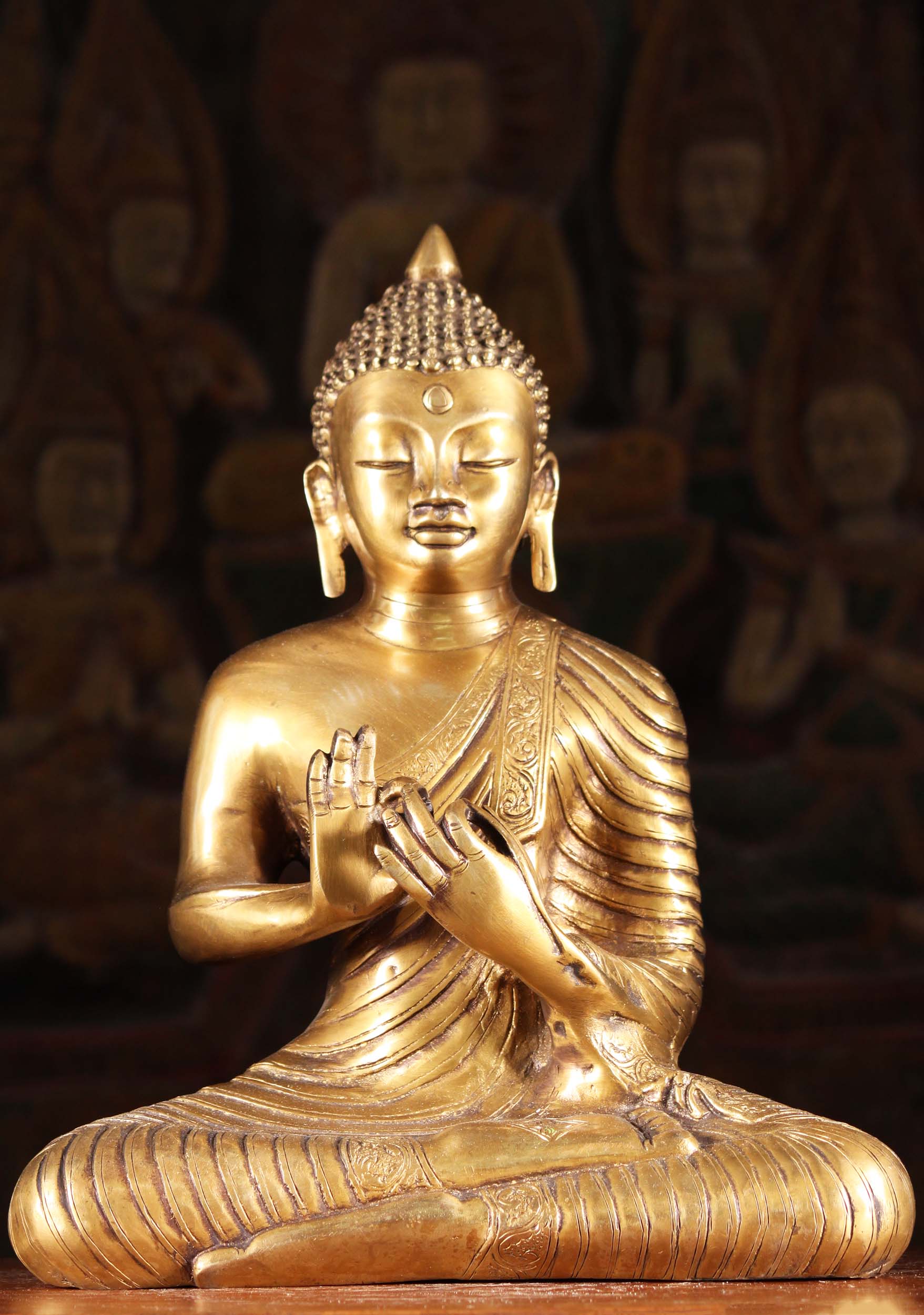 Kunto Buddha
Kunto is another form of Buddha. Here Buddha can be seen in two colors – black and the white. The black part represents the Buddha in a male form, while the white part portrays a female that is living inside the body Buddha
Buy Kunto Thangka Painting Online