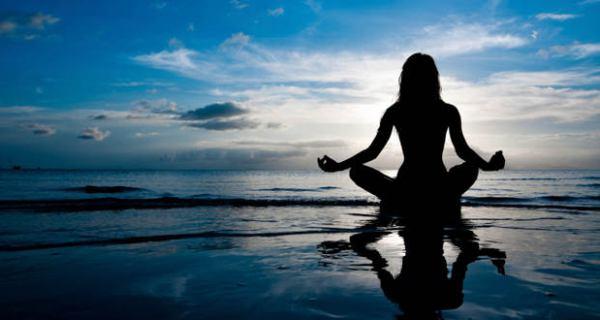 While the asanas or postures which will be described later are a basic part of the practice of Yoga, we should continue our study of Raja Yoga, the non-physical phases of this practice. Some readers may find they cannot follow the rigid discipline of a full Yogic life; others may be seeking an easier path to relaxation and may feel that they are less concerned with their physical than their mental states.

Breath control is an essential first step in obtaining a state of relaxation. If you can, assume the Padmasana or Lotus Pose or place yourself in a comfortable sitting position. Taken directly from the ancient Sanskrit texts, the Hatha Yoga Pradipika of Swatmaram Swami provides a specific guide for relaxation through breathing exercises.

There are three Yogic terms which you should know: “puraka” is the term for inhalation; “rechaka” for exhalation; “kumbhaka” for retention of breath. Yogic instructions are: the Yogi assuming the Lotus Pose should draw in the prana (breath) through the Ida (left nostril), and, having retained it as long as he can, exhale it through the Pingala (right nostril). Again, inhaling through the right nostril, he should hold his breath as long as possible and exhale slowly through the left nostril. He should inhale through the same nostril by which he exhaled and having restrained the breath to the utmost (until he is covered with perspiration, or until his body shakes) he should then exhale slowly, as exhaling forcefully would diminish the energy of the body.

These exercises should be performed four times a day—in the early morning, at midday, evening and midnight—slowly increasing the number from three, each time, to eighty. Their effects are described as “to render the mind and body slender and bright.” Although in the direct translation from Sanskrit, the ida is named as being the left nostril and the Pingala as the right one, these words more properly designate the two supposed conduits which connect with the nostrils, and thence conduct throughout the entire body the vital air (the prana) that enters with the atmospheric air.

Before undertaking these exercises, persons of phlegmatic temperament are directed to go through the following course of preparation:

According to the Hindu system of physiology, there are seventy-two thousand nadis or channels leading from the throat to the kundalini in the pelvic region. When these channels have been purified by proper breath control, the body is ready to absorb the fullest prana from the atmosphere.

Then, according to the old tracts,

The body becomes lean, the speech eloquent, the inner sounds of the individual’s body are distinctly heard, the eyes are clear and bright, the body is freed from all disease, the seminal fluid is concentrated, the digestive fire is increased and the nadis are purified.

It is known that long and close concentration upon any given part of the body will induce sensations there and, sometimes, even movement. Control over unused muscles may be obtained in this way. While it is a basic claim for Hatha Yoga that the breathing exercises can lead to control over the mind by supplying arterialized blood to the brain, and thus control mental by physical action, it is also claimed that strong, persistent concentration of the mind will induce controlled breathing, thus directing physical action by mental.

A story is told of a student whose teacher made him sit meditating in silence for twelve years and at last commanded him to pronounce the sacred syllables A.U.M. This he did with the following results: “When the student came to the first syllable, rechaka, or the process by which the air in the lungs is pumped out, set in naturally. When he finished the second syllable, puraka, or the process of inhalation, set in. At the end of the third syllable, kumbhaka, or the process of retention, set in, and in a short time he had settled into the pure and elevated state of samadhi, which may be defined as perfect relaxation.”

This story illustrates the largeness of the claim on behalf of Raja Yoga, or mental Yoga, that it brings physical Yoga with it, provided that the mental processes take the form of long-continued silent concentration. It also supports the claim that what it brings is important, since the pranayama of the student soon brought him into perfect absorption

Though many asanas, or postures, are unsuited to people who habitually sit in chairs, those who practice Yoga often find themselves falling into these poses almost involuntarily. Many believe that the asanas are natural positions of relaxation into which the body falls when freed from the controls of the conscious mind and from the postures into which they have been trained in our so-called “civilized living.” William Flagg, one of the first Westerners to probe the secrets of Yoga, once stated: “A leg has jerked itself upwards and pressed the sole of its foot against the other as high up as seemed possible; this has happened hundreds of times.” The posture here imitated is sitting on a foot, and its efficacy is supposed to lie in the pressure upon the nerve centers in the foot, leg, and region of the perineum.

Another asana resembling the “plant balance” of modern gymnastics is described thus:

Plant your hands firmly on the ground and support your body on your elbows, pressing against the sides of your loins. Raise your feet in the air stiff and straight on a level with the head.

This position was attempted while the practitioner was seated in an easy chair, and failed to be completed only because the back of the chair kept the head from falling to the level of the feet. The legs were lifted from the floor and thrust out stiffly, while the weight of the body was made to rest on the elbows, which were resting on the arms of the chair.

This was repeated not only once, but a great number of times. The elbows were pressed against the sides, forcefully and involuntarily hammering themselves violently and repeatedly against the sides, giving excellent massage to both liver and spleen.

The Shavasana said to eliminate fatigue and induce calmness of mind, is described as lying on one’s back at full length like a corpse. Often, when lying on his side, the practitioner has been turned over on his back as though by a power foreign to him, though apparently using his own muscles.

This resulted in a curious sensation, which reproduced on the feet, ankles, and seat of the body the compression which is obtainable by sitting on the feet, Eastern fashion. It was as if a foreign body were pressed against the person’s sides with a force equal to what would be felt in the postures of Hatha Yoga. Sometimes several of the parts in question were acted upon simultaneously.

Another incident of a similar nature is described by Flagg in the practice of the mudras, or acts for putting the body in good condition.

The Nauli Mudra is described:

With the head bent down, one should turn right and left the intestines of the stomach with the slow motion of a small eddy in the river.

Something like this interior movement is produced by one process of the Swedish movement-cure. It consists of sitting on a stool, bending the body forward as far as possible and rotating the trunk of the body like the spoke of a horizontal wheel.

The head represents the tire and the seat, the hub. It was just this movement that, in the case of two persons observed, was set up as often as kumbhaka, or the suspension of the breath, was practiced, neither of them having an idea of such a result. The Nauli Mudra is considered one of the most important of all Hatha exercises, and the body rotation is one of the most effective of the Swedish exercises.

A Yoga technique for concentration is expressed as “looking fixedly at the spot between the eyebrows.” Many have reported that while cleansing the mind of thought, the eyeballs would of themselves roll upward as far as they could go, and hold themselves there.

The Shambhavi Mudra provides almost complete relaxation by dividing the conscious concentration. It consists of fixing the mind on some part of the body and the eyes rigidly and unwinkingly on an external object. Often while you are concentrating intently with your eyes closed, they will seem to open almost of themselves and fix on some object within range, always rigidly and without winking.

Another direction for the Yogi says:

Direct the pupils of the eyes toward the light by raising the eyebrows a little upward.

Often while trying this, your eyebrows will raise themselves as if to get out of the way of the eyes. In the motions noted here and in others, it seems as though an intelligent power beyond conscious reach takes the Yoga adherent out of his own hands.

This power appears to assume control of voluntary and involuntary muscles, working them independently of the person’s will, though, it should be noted, never against it.