Representation of Dragons in Tibetan Culture 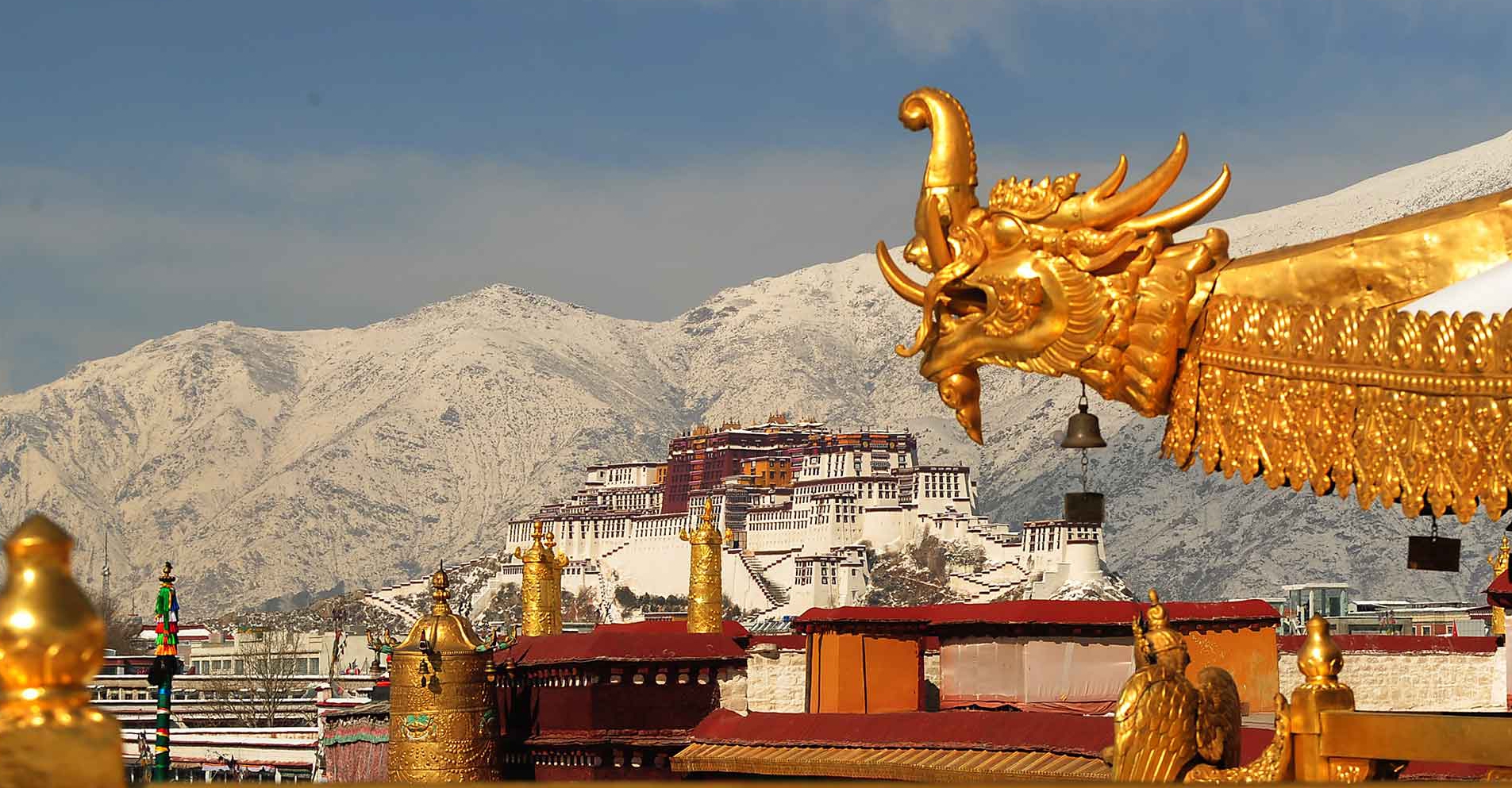 Representation of Dragons in Tibetan Culture

Tibet has the largest tradition of Dragon which dates back more than 7000 years. Dragons are not just mythical stories or just some curiosities. They are part of Tibetan life and culture. The symbols of dragons are everywhere from the beginning of Tibetan history and the importance is still up until today.

In Tibet, Dragon is considered as one of the dignities. There is a total of four dignities. Tiger, snow lion, and the Garuda are the other three. The Dragon is believed to be the symbol of enlightenment and the power of perfect communication. It is believed that dragons are able to see right through the slander and other forms of manipulation. Since Dragons cannot be seen by naked eyes, they’re known to announce their presence by a thunderous sound that wakens people false beliefs and perceptions. Due to the prominence of dragons, their images are printed on most of the Tibetan prayer flags, prayer wheels as they can be seen on the roofs of many typical Tibetan homes. These flags are believed to increase luck in Tibetan homes. Tibetan dragons are used to decorate temple gates and roofs, which is believed to embody the Buddha’s teachings.

People still believe that dragons still fly over the vast Himalayan plateau, and while not many may profess to see (or feel) them flying through the skies, they are still very much a part of Tibet’s rich history and cultural imagination. Dragons are symbols for power, strength, and divine protection. They also represent wisdom, fortune, and advancement within the Chinese iconography. They represent that the very best divine power on Earth and were, for that reason, reserved for the emperor. The dragon stands for the Yin, symbolizing the East and therefore rain. Additionally, it’s a male element and also denotes masculinity. The motif of Dragon Carpet is power, strength, and divine Protection

The symbols of dragons are mostly used in Tibetan Rugs, Thangka, and Furniture as well.

Tibetan carpet making is one of the traditional ancient crafts. Tibetan rug-making is one of the ancient traditions of the Central Asian region. Tibet prides itself on its long history of fine craftsmanship and quality finishes and is extremely conscious of its influence on neighboring countries like Nepal and India. Carpets can also be carriers of encrypted messages. There are many symbols and designs present in a Tibetan carpet such as the use of phoenix, snow lion, tiger, mandala design, and many more. 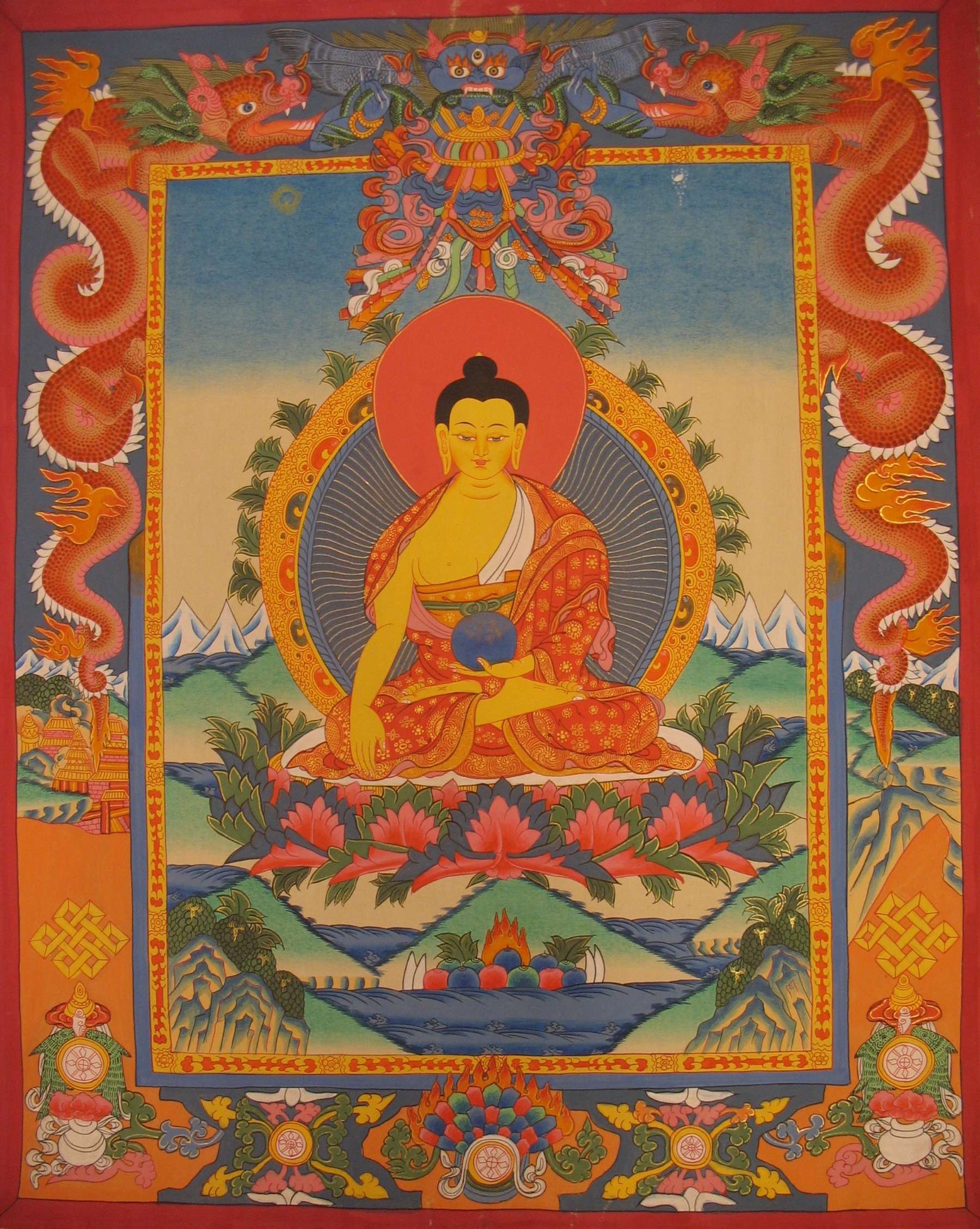 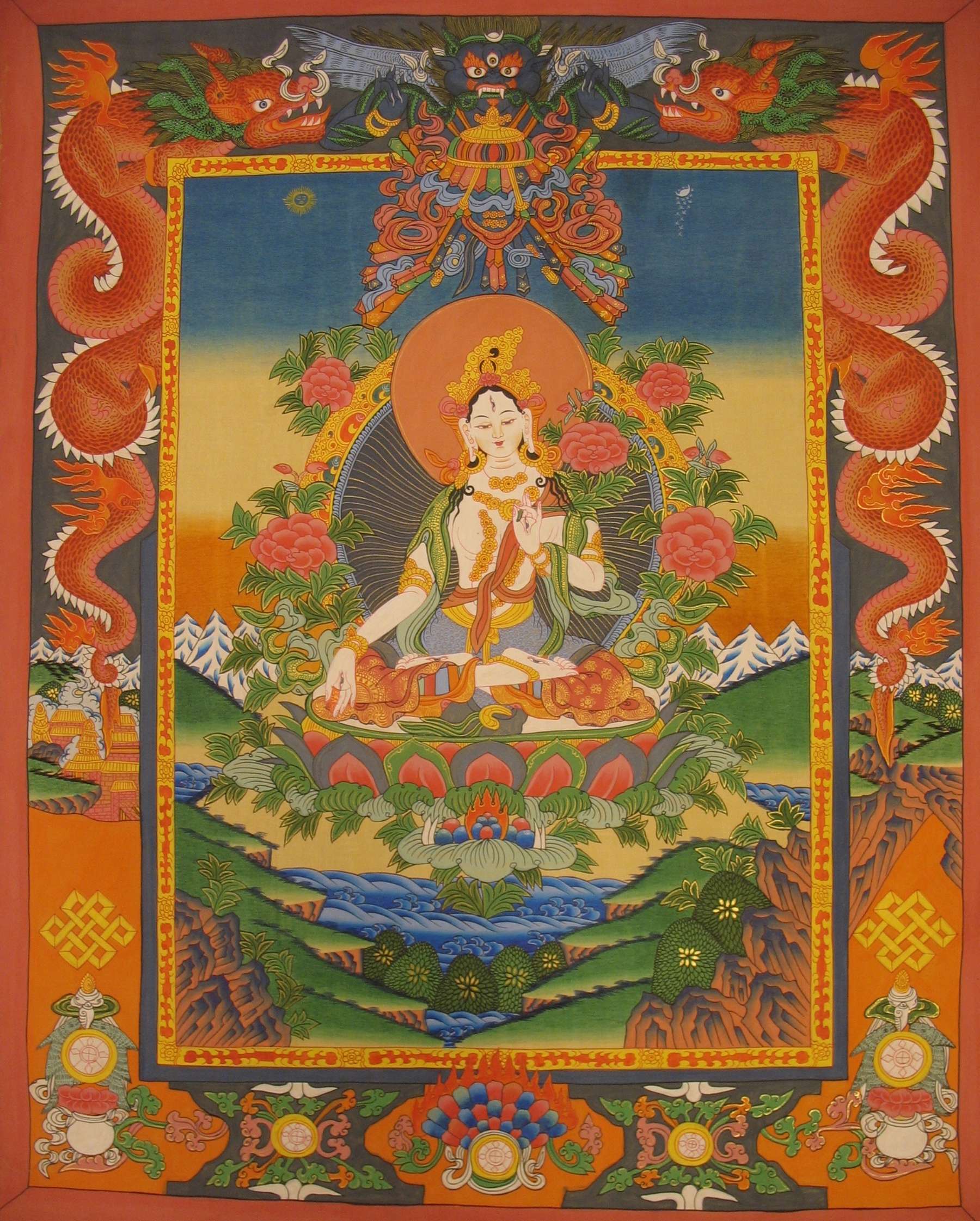 Thangka is supposed to be a scroll painting in Tibet. It is used for worshipping in Tibetan Buddhism. A thangka is always captivating as it’s the work of art as a scroll painting. It’s basically one of the unique pieces of art to Tibetan Buddhism. It easily tantalizes your eyes through its brilliance and colors and elaborate scenes as well. It tells us about the unique history, culture, social life, beliefs, and practices of Tibetan people. It is made with many symbols and designs.

In Tibet, Dragons are believed to have symbolized power, creativity, heaven, and good fortune. They are believed to have authority over bodies of water, rain, floods, and storms. Dragon in Tibetan Thangka represents luck. The designs of Dragon in Thangkas are very popular among may peoples across the world. In Buddhism, these thangkas are for the symbols and their traditional norms and values and in western countries, it is seen as the beautiful piece of design in art. The Dragons are usually made as to the border in Tibetan Thangka.

Tibetan Furniture is ancient and is simple but gorgeous. Those are decorated with colorful paintings, stones, engraved woods and is also decorated with fur. It is also famous for its decorative patterns, which is believed to bring fortune and treasure in people’s life. It is also known for its vitality, embodied in its design, decoration, and vast colors. The types of Tibetan symbols are below: 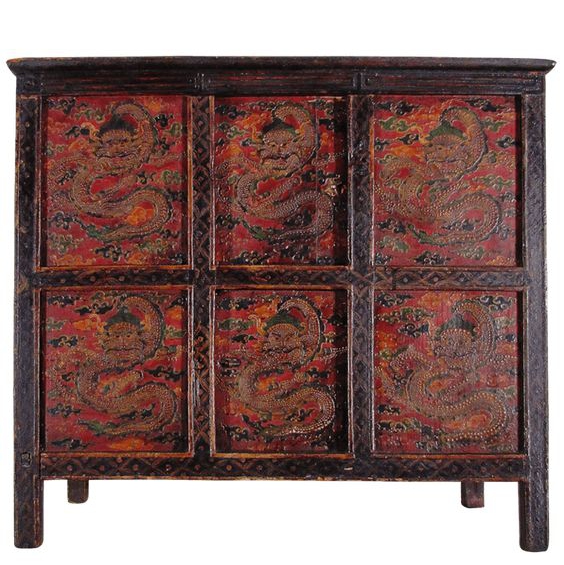 Tibetan Cabinets are very popular furniture in almost part of the country. The cabinets use many designs and symbols as their motifs. The dragons in Tibetan Cabinet are stunning. Many people located in Tibet believe dragons as fortune givers. The cabinet consisting of dragon designs or paintings are highly preferred. 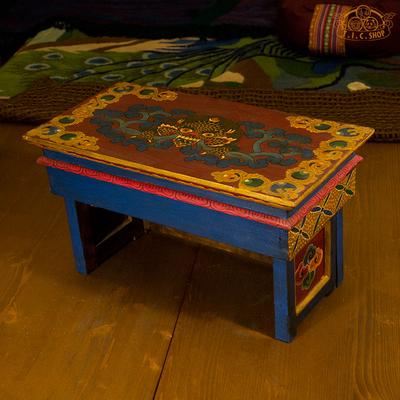 Tibetan Tables are always painted with symbols such as dragons, snow lion, tiger, lotus flower, and so on. Especially in Tibet, Tibetan Tables are for medication purposes. The table has a dragon as a motif is considered as a boon. Since the dragon is one of the main aspects of Tibetan culture people are pleased to start their day with medication looking at the dragon symbols. Also, as Dragon is considered as one of the dignities it is believed to positive the body.

Dragons are considered very powerful, the kind-hearted creature in Tibetan Buddhism. The presence of a dragon brings luck, enlightens the entire house, helps friends and family away from any misfortunes is believed in Tibetan cultures. It is believed that there should be at least one symbol of a dragon in any  Tibetan house. Dragon in the border of Mandalas 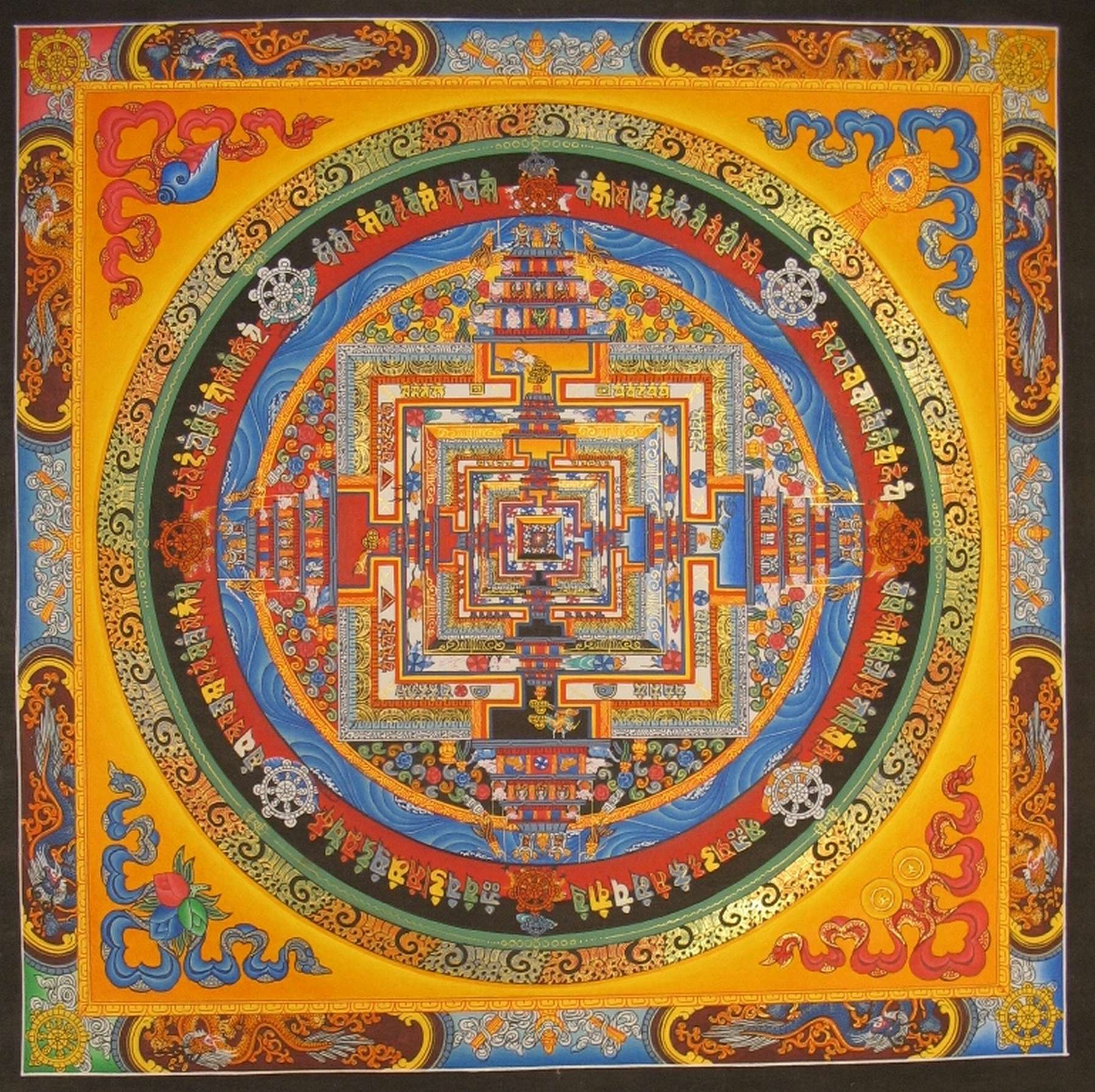 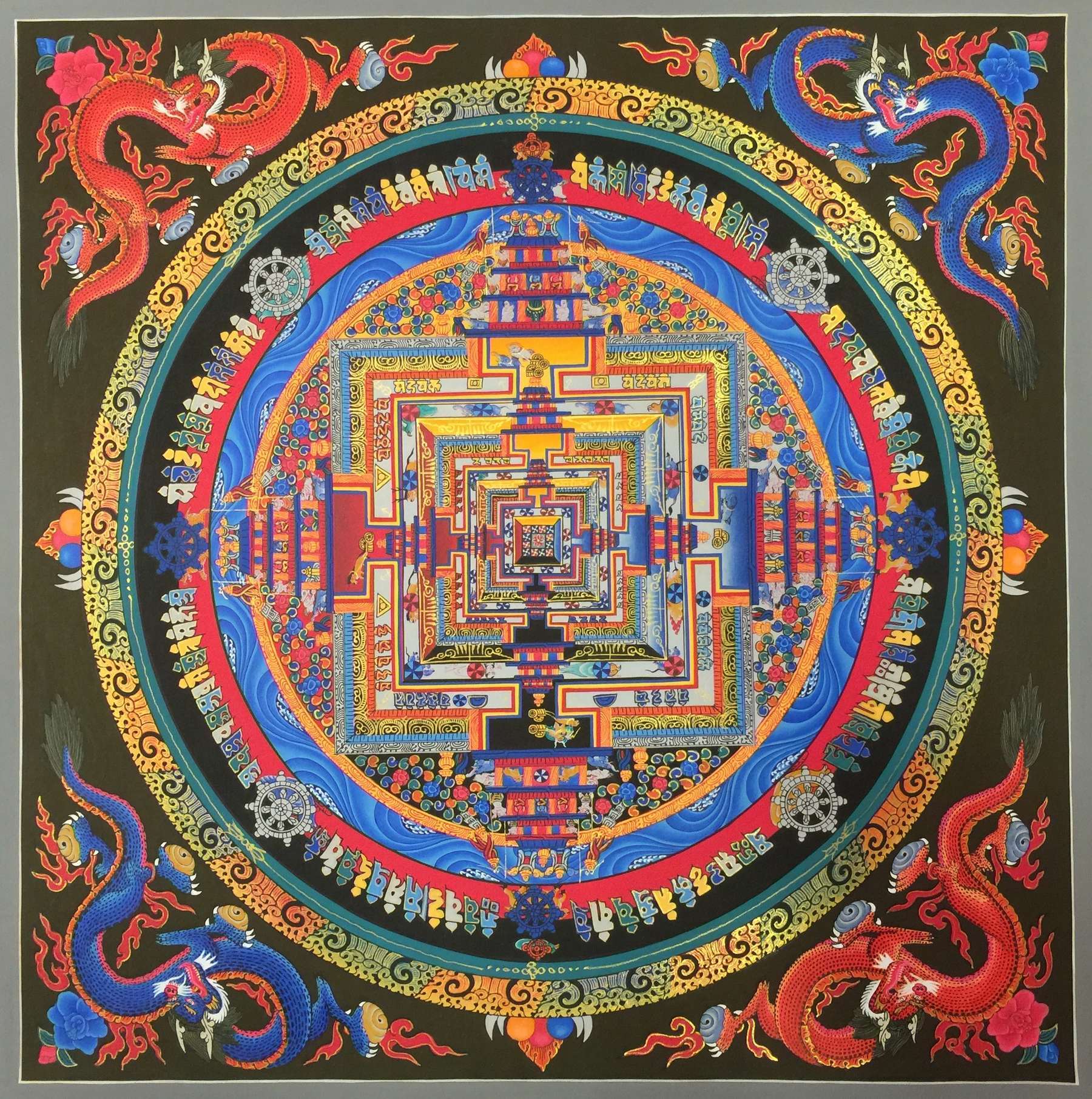 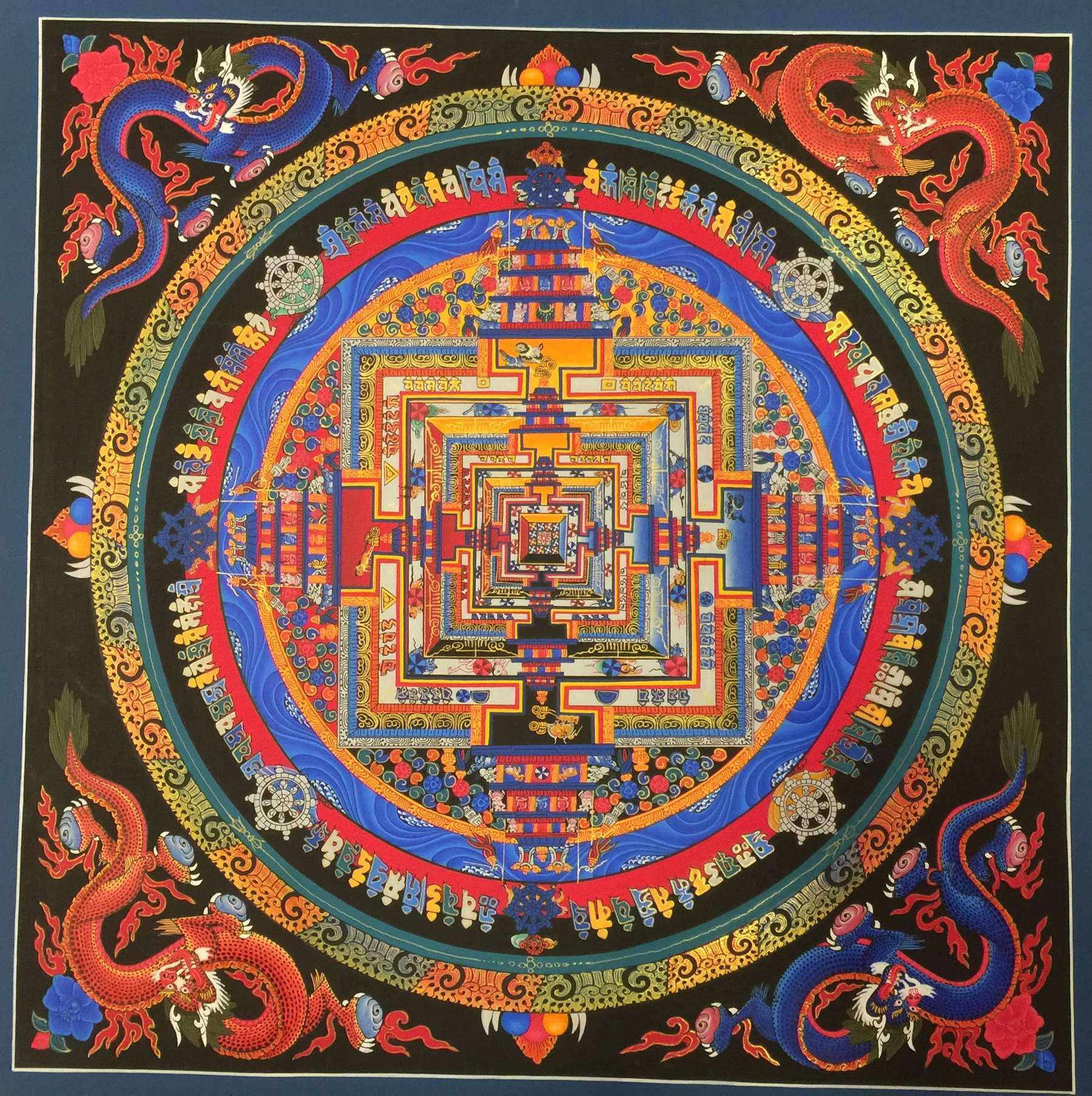 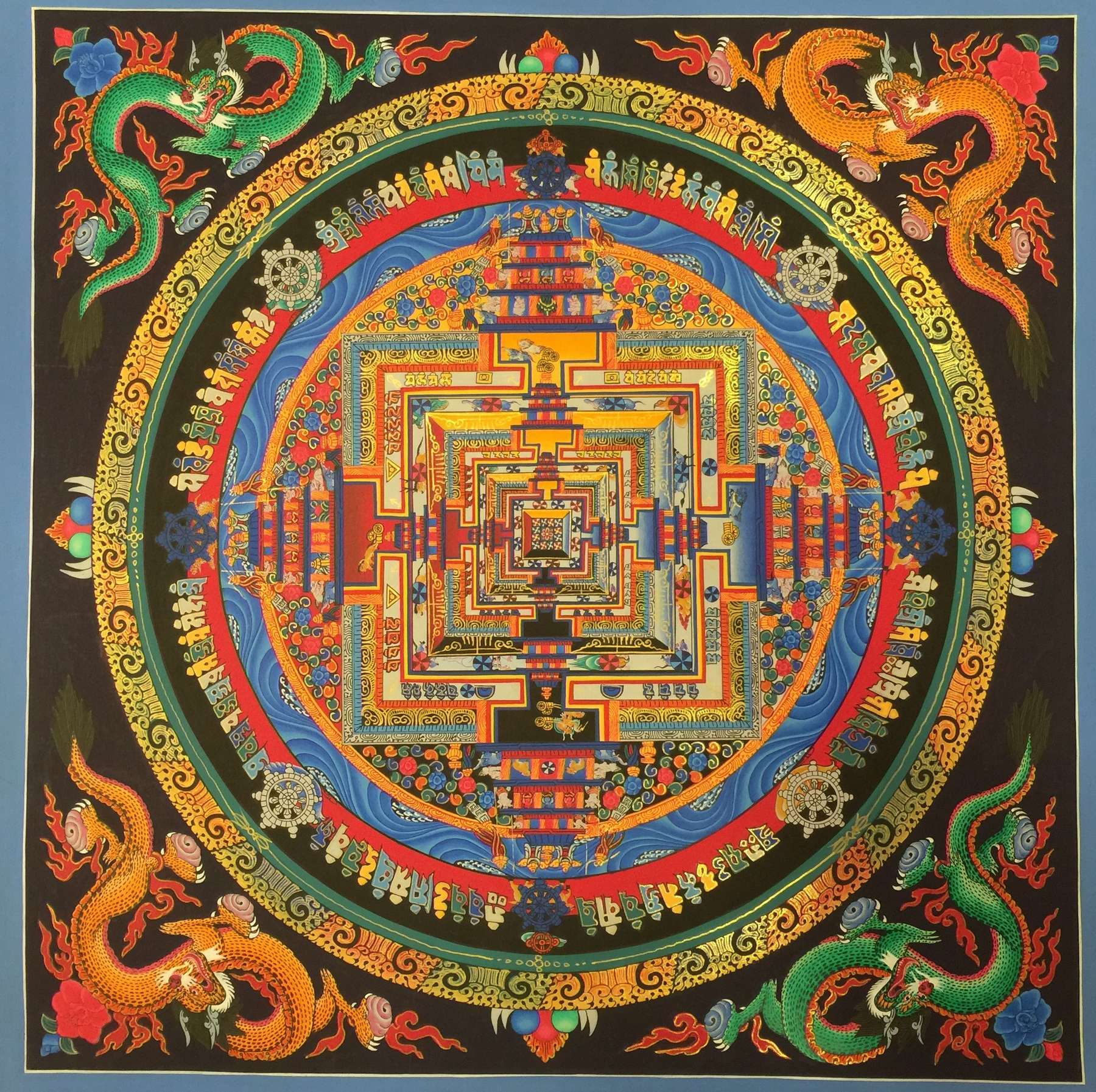 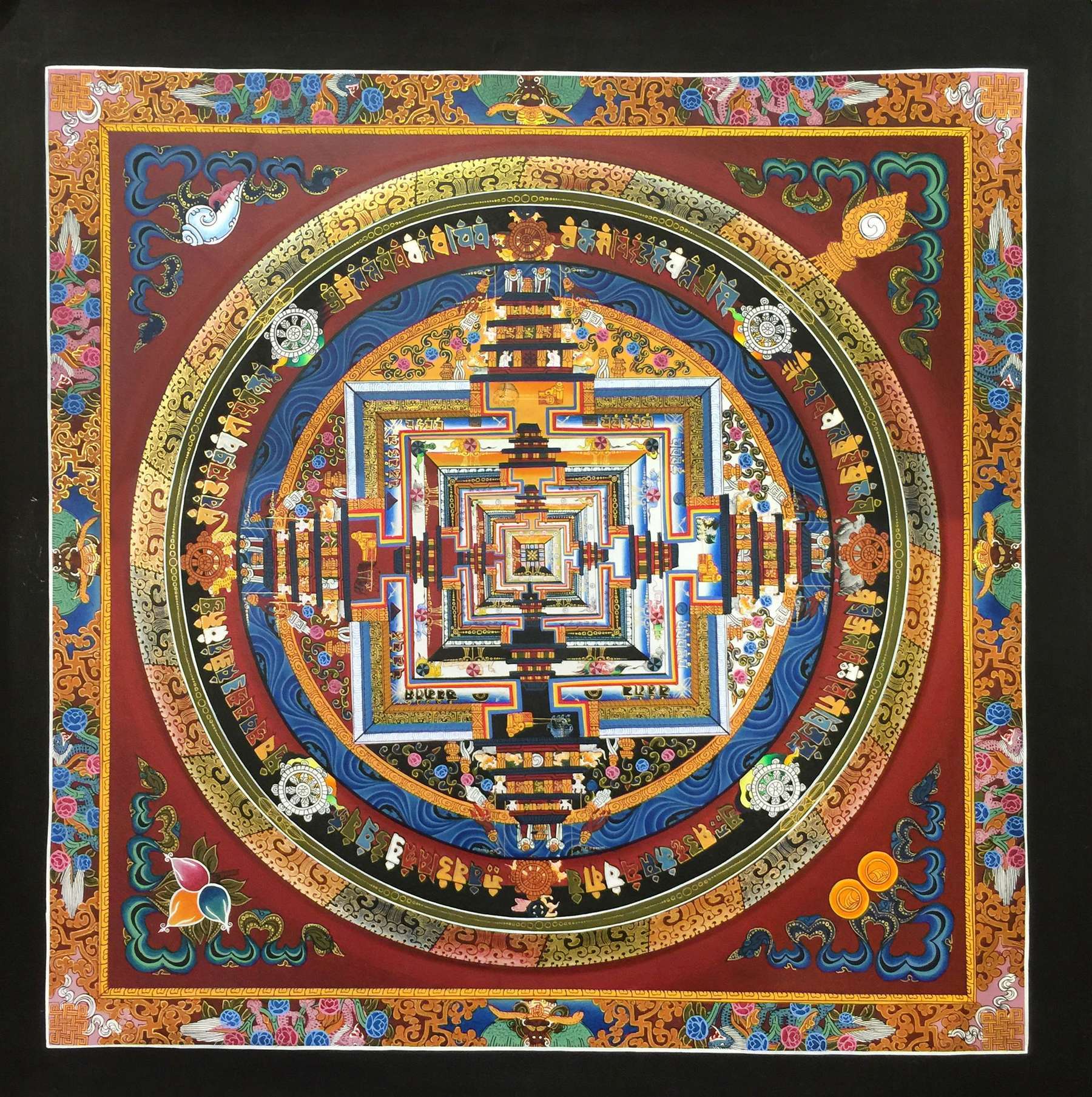 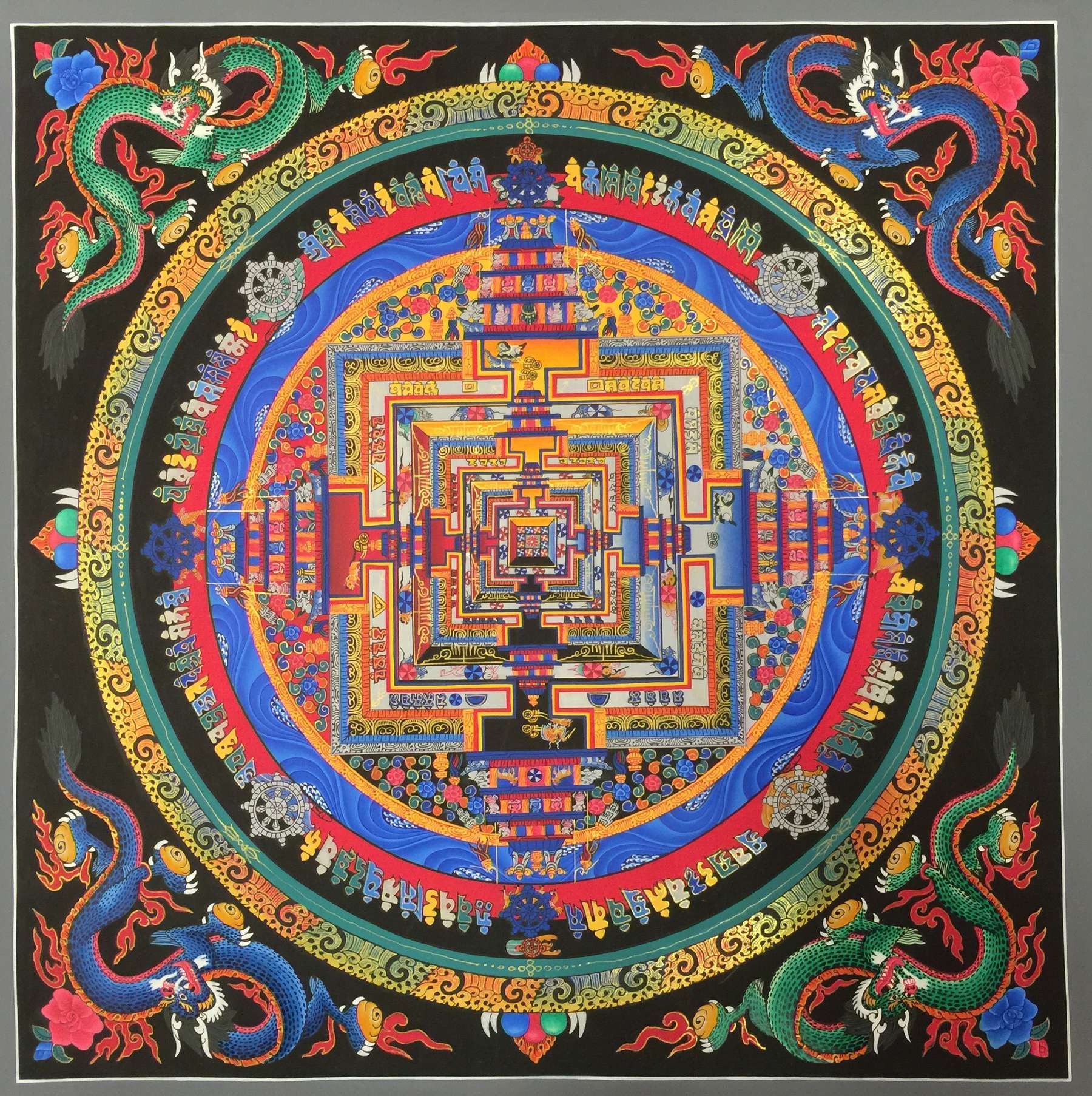 A mandala is often known as a symbolic picture of the universe. The Tibetan Mandala is known as a tool for gaining wisdom and compassion and generally is depicted as a tightly balanced, geometric composition wherein deities reside. It is believed that the mandala servers as a tool for guiding individuals along the path of enlightenment. The purpose of the mandala is to help transform an ordinary mind into enlightened ones.

It can be found almost everywhere in Tibetan culture. Whether painting on a wall or in any Tibetan Tables, Carpets, Cabinets, and many more forms. The dragons are also found in the border of the mandala as a motif or some sort of design but it is highly valued in the Tibetan culture as the combination of both dragon and mandala are supposed to be very powerful. 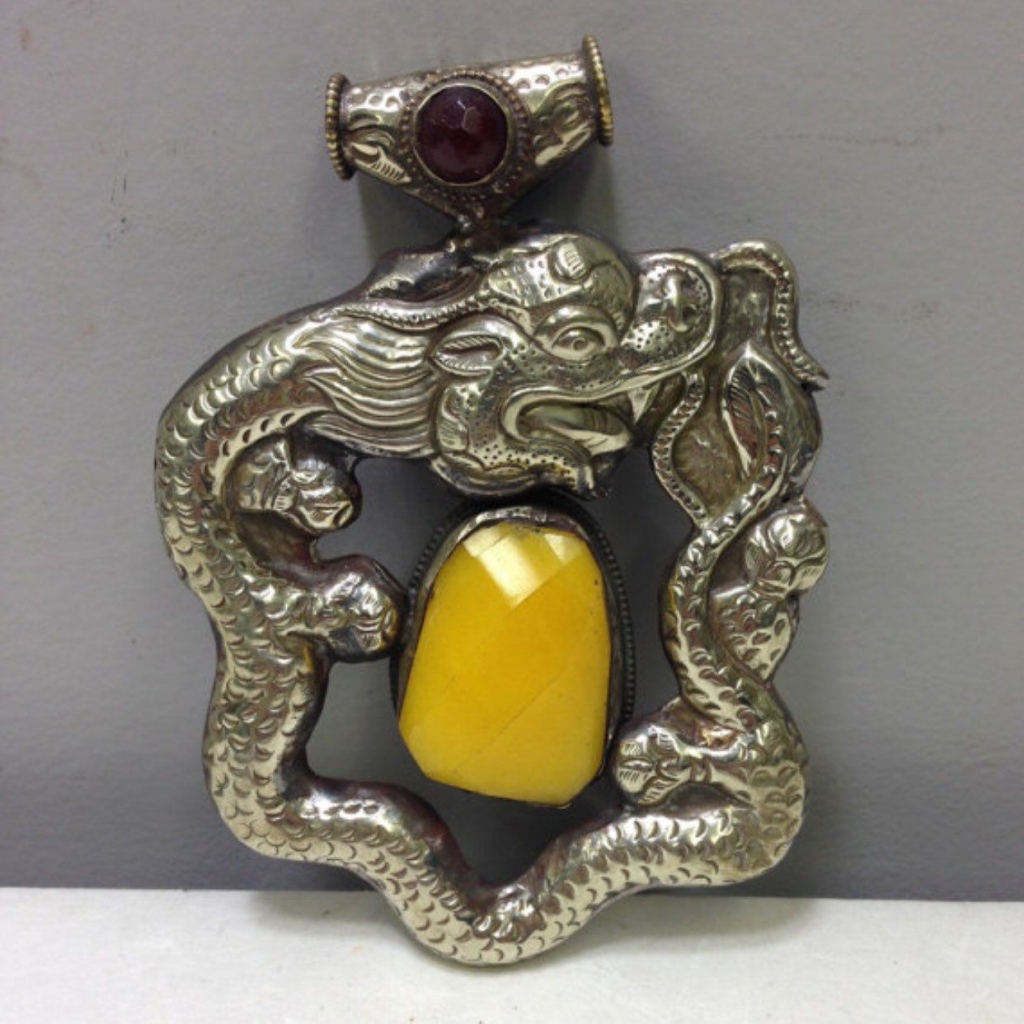 Tibetan jewelry includes necklaces, bracelets, earrings, rings, and pendants that are made from traditionally feature materials. That Tibetan Jewelry has its own historical importance. As the jewelry has many designs and those designs include dragons, flowers, Endless knots, and many more.

It is believed that having a dragon helps you bring a fortune in your life, gives you positive energy. And the Tibetan people are very attached to it. 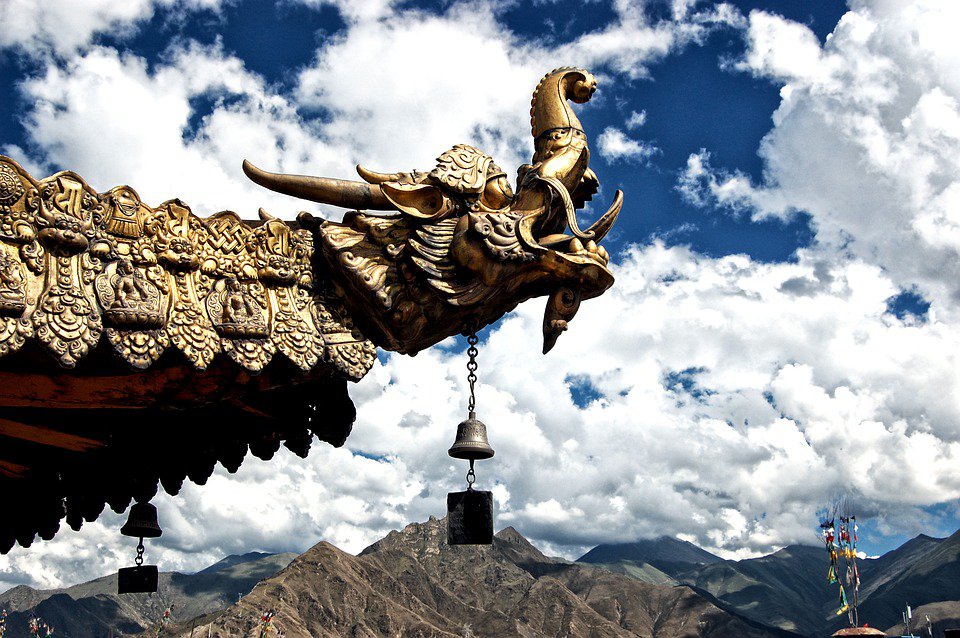 Tibet is very rich in its Architecture. It is said that Tibetan Architecture is mainly influenced by Indian and Chinese architecture. It has many unique features that are brought about by its adaptation to the cold, generally arid, high-altitude climate of the Tibetan plateau. Buildings are generally made from locally available construction materials. They are often embellished with symbols of Tibetan Buddhism.

Dragons are highly valued in Tibetan Culture as people look up to it as a loving and warmhearted creature. Tibetan dragons are used to decorate temple gates and roofs, which is believed to embody the Buddha’s teachings. The symbols of dragons are supposed to bring enlightenment in people’s life.

Tibetan face mask is used as the symbol of diety. Those masks stand for gods, animals, fairies, demons, and ghosts. They’re especially used in ancient Tibetan dance. It is believed that wearing those masks in Tibetan Culture helps the community fight from negativity and helps bring peace and positivity. It helps to keep away people from negative thoughts.

Dragons are used as symbols in the Tibetan Face mask. Tibetan believe the use of diety as a dragon helps them fight negative energy and bring positive energy in their life. 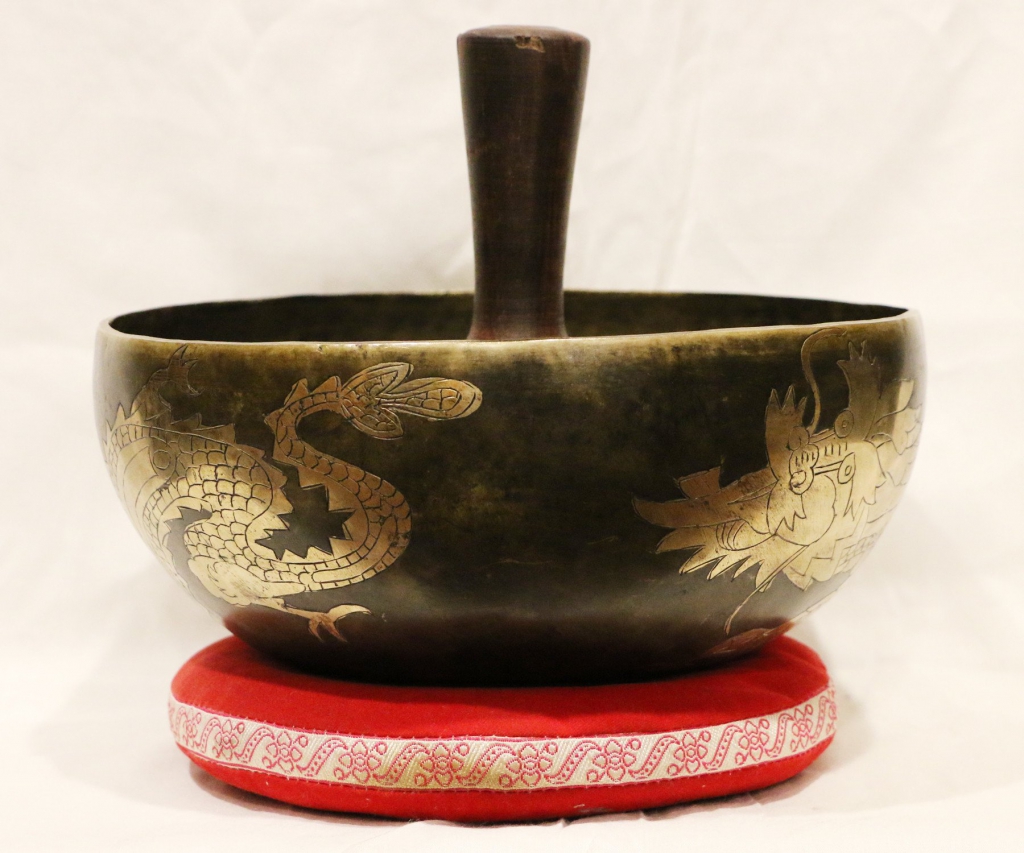 Tibetan Singing bowls are played to signal the end and the beginning of silent medication cycles. They are also known as Himalayan bowls. They are used in yoga, music therapy, sound healing, and religious ceremonies. These bowls emit a very soothing sound that is also a synonym of purity for ears.

Dragons are believed to bring a fortune to People’s life. They are also a part of the Tibetan Singing bowl which is very much preferred.