The Dark Armies of the Dharma 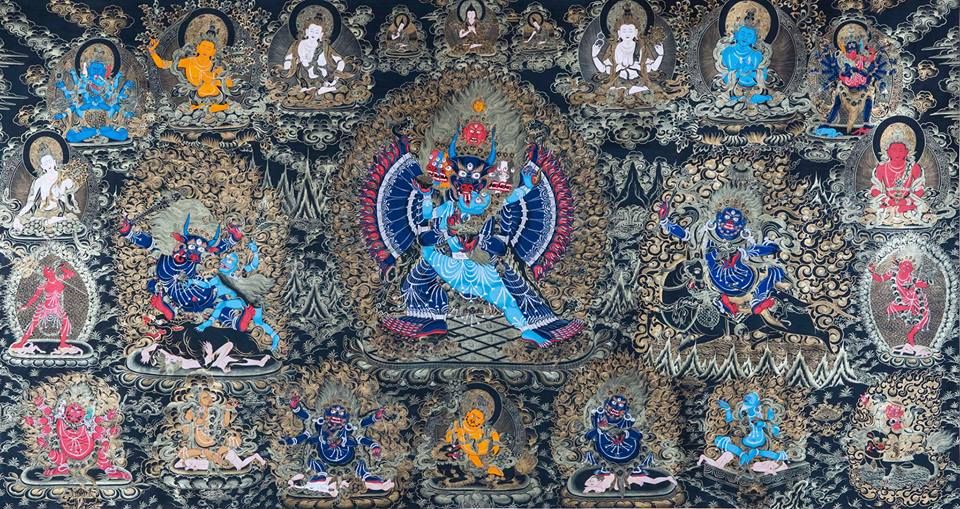 The Dark Armies of the Dharma

Avalokitesvara, the Lord of Compassion, gazes out across the world, his white radiance soothing the sufferings of living beings. With one pair of hands, he clasps to his heart the wish-fulfilling gem of his vow to eradicate the world’s pain. In his upper left hand, he holds the lotus of spiritual receptivity, the desire to leave the mud of samsara and reach up toward the sun of true happiness. Above his head, we sense the oceanic love of Amitabha, his spiritual father. In Avalokitesvara’s heart, the mantra om manipadme hum rotates ceaselessly, pouring its light into the six realms of suffering. 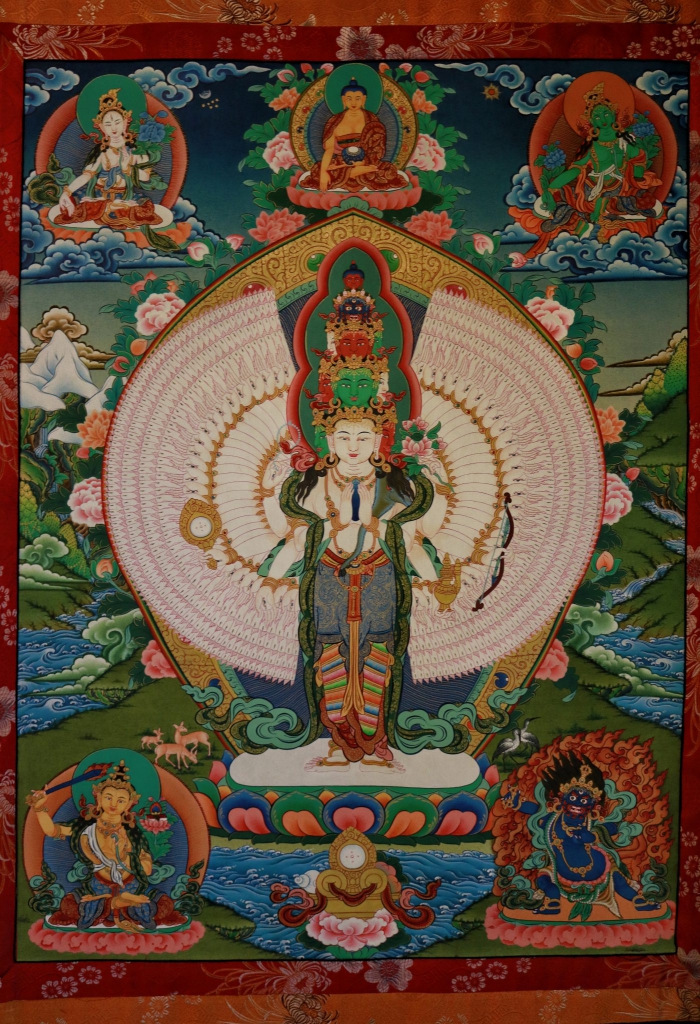 In his upper right hand, we see his crystal mala turning. With each bead, another being’s sufferings are extinguished. We watch the dancing reflections in the crystal beads, follow their steady rhythm as aeons pass.

Still, the beads flow through the milk-white fingers. The pace is steady, smooth, ceaseless. And yet… there is still so much agony, pain, and frustration mirrored in those patient eyes. Hearts which hear the call of the mantra and long to respond are chained by dark forces, restrained by fear, bewildered by confusion so that they do not know whence the sound comes or how to follow it.

The sapphire eyes cloud with a gathering storm of spiritual impatience. They steal a glance at the steady, but too slow, circling of the crystal beads to their right. They look once more, hard, at the plague forces of ignorance, the jailers of hatred, the ransomers of craving who hold so many beings in their clutches.

The crystal beads begin to change shape. They lose their sparkling reflections for a sun-bleached white. They become a death’s head garland, a rosary of skulls. The delicate white hand grows darker, its light changing from white to deep blue, like an eclipse of the sun. The powerful hand’s first and last fingers stab the air in a menacing gesture. Around it roars a corona of flames.

With a world-shaking cry the figure, now blue-black starts to its feet. The wish-fulfilling jewel transforms into a vajra-chopper and a skull cup dripping with red nectar. The soft lotus transforms into a trident with a death’s head. From the huge, overpowering blue-black body another arm thrusts out, rattling a skull drum. To the left, a further fist uncoils a noose.

The dark army hurtles forward and enters the kingdom of Mara, the custodian of samsara. Mara’s sentinels see them coming, their warning cries freezing with horror in their throats. No alarm is needed though, for the clashing of the weapons, the pounding of the hooves of that terrible horde, and the battle-cry of their leader causes earthquakes in all six realms, and shakes the foundations of Mara’s palace.

Mara’s imperial guard, sent out to do or die, hesitates in its first charge, flinging down weapons that would only serve to slow its headlong retreat. Mara’s daughters, sent to parley, are dumped unceremoniously over the backs of the advancing cavalry, their alluring dresses dragging in the mud.

The bone mala in the huge right fist whirls so fast now that no skulls can be seen. It is just a perfect circle of white light. As the hostages are led out, free at last, the eyes of the giant black general look down at them with fathomless compassion.

Dharmapalas are often visualized along with the three esoteric Refuges. They do not form a fourth Refuge, rather they are the vajra-wall of protection that guards the three Refuges, both exoteric and esoteric. They are the bodyguards of the Tantra. They defend its teachings and its practitioners from inner or outer enemies. As is typical of Tantra, their protective power is understood and used on many different levels.

Dharmapalas are invoked for magical protection from external harm by some Tantric practitioners. Namkhai Norbu Rimpoche tells how he used a sadhana of the dharmapalas to give warning of attacks by bandits when making a dangerous journey across Tibet. Tibetan monasteries had a special shrine-room for the performance of Dharmapala rituals.

The monks assigned to the practice sat in the darkened room, their texts illumined only by the butter lamps on the shrine. In the gloom, they could discern the images of the Protectors. The room would be strewn with old weapons donated to the monastery. Carcasses of wild beasts adorned the ceiling. In this awe-inspiring and forbidding place, the monks would chant the rituals that protected the area from misfortune, from sickness, and from the storm. Their rites, it was believed, cast a circle of protection over the region. 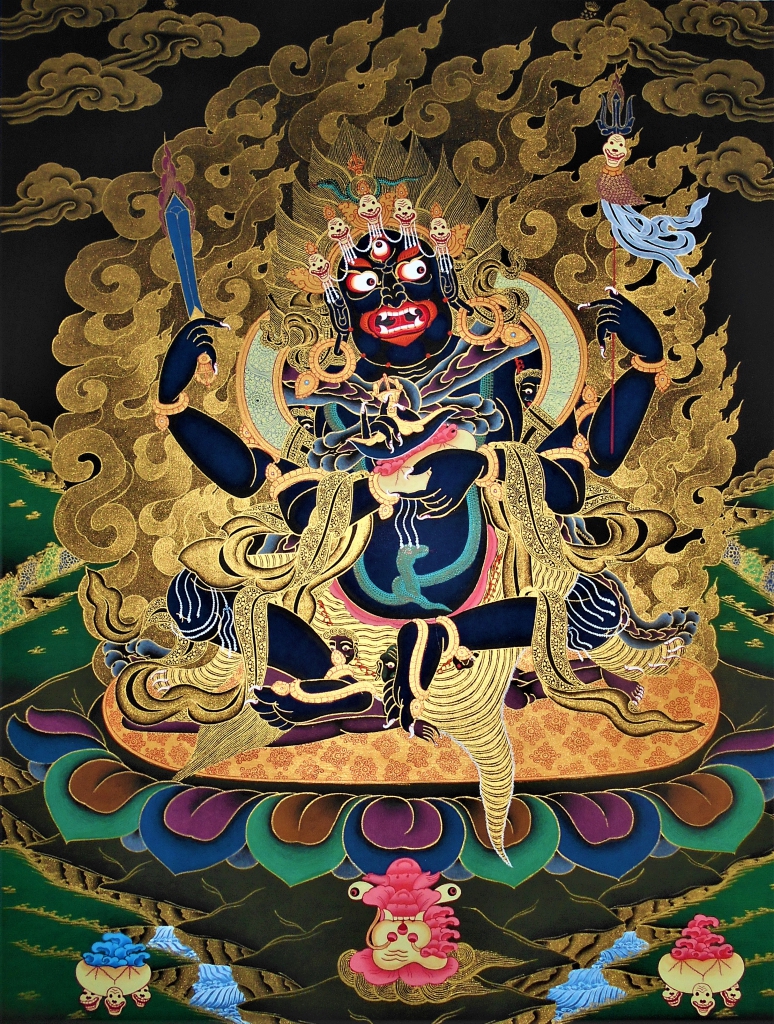 Mahakala is the most commonly invoked of all Dharma protectors and is important to all schools of Tibetan Buddhism. In Tibetan, he is often known simply as ‘the Lord’.

He has over seventy different forms, and each particular school has those it particularly favours. For the Nyingmapas it is the Four-Faced Lord for the Karma Kagyu the squat, misshapen Black-Cloaked Lord. For the Sakyapas it is the Lord of the Tent, whose special emblem is a magic staff resting across his outstretched arms. For the Gelukpas the most important form is the six-armed, whom we have already seen in action, holding the skull rosary in his upper right hand. He is also invoked in major gatherings of the Geluk monastic assemblies in a four-armed form.

This ‘hastening six-armed’ form is usually shown trampling on the prostrate form of Ganesha, the elephant-headed Hindu god. Chogyam Trungpa suggests that Ganesha symbolizes subconscious thoughts. When we lapse into distraction and mental chatter, Mahakala stamps out our subvocal gossip and calls us back to attentiveness. Though there are Mahakalas of different colours, they are typically huge, blue-black, and tremendously wrathful. They are often surrounded by a retinue of similar figures, or by other demons and demonesses. A good example of such a visualization is given in a sadhana of the Four-Faced Lord.

This form of Mahakala is blue-black, with faces to the right and left of the central one, and one above. The front one is black and munches a corpse. The others are each of a different colour and expression: wrathfully smiling, roaring with laughter, and frowning. All have three glowering eyes, which see into the past, present, and future. 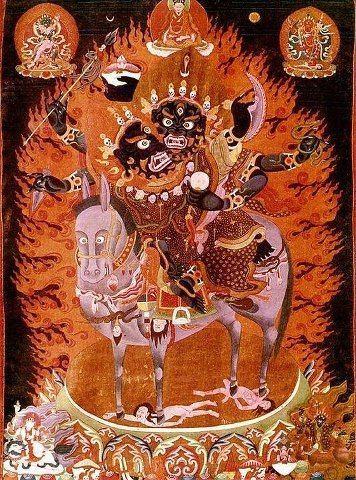 The female companion of Mahakala, whom we saw riding into battle alongside him and who equals him in power, is Sridevi (‘glorious goddess’, Tibetan Paldan Lhamo). Just as Mahakala is the ‘dangerous’ form of the benign Avalokitesvara, so Sridevi has both peaceful and wrathful forms. Her peaceful manifestation is known as Ekamatri Sridevi Dressed in celestial clothing, she sits on a lotus in the posture of royal ease, her left foot slightly extended. She wears a Bodhisattva crown of jewels and smiles compassionately. In her left hand, she holds a bowl filled with jewels. In her right hand is a standard with pennants in all the colours of the rainbow. Her body is enhaloed with brilliant light.

In her wrathful guise, she is somewhat different. She is dark blue, ferocious, with three bloodshot eyes. Her flaming red hair stands on end, and above her head is a fan of peacock feathers. She has sharp fangs and laughs with a sound like thunder. She rides on a mule, which is galloping furiously over a sea of blood. It is said that she is riding towards Siberia, after an unsuccessful attempt to convert the king of (Sri) Lanka to the Dharma. Her mule has been hit by the vengeful king’s arrow. The wound in its flank has been transformed into a wisdom eye.

She is largely naked, her body wreathed with snakes and adorned with bone ornaments and a necklace of skulls. In her left hand, she bears a brimming skull cup. In her right, she holds aloft a black skull-topped command staff. Flames roar and black storm-clouds swirl around her as she gallops along. From her saddle hangs a pouch with dice. (Her initiation is held to be a gateway to divinatory powers, and she can be invoked by practitioners of mo, the Tibetan system of divination, which involves the use of dice. There is also a lake called Lhamo Latso, to the south-east of Lhasa, whose reflections are said to reveal the future.) She sits sidesaddle on the flayed skin of her own son

Sridevi was given various gifts by other deities. She received the dice from Hevajra in order to determine the life of men. She received the fan of peacock feathers from Brahma (one of the most important Hindu gods, who was incorporated into Tantric Buddhism as a minor protector). Vajrapani gave her a hammer, and various other deities gave her a lion and a serpent, which she wears as earrings, and her mule, which has deadly snakes for reins.

There are many forms of Sridevi, and different schools of Tibetan Buddhism may regard one or another of them as their special protector. Her meditation was introduced into Tibet by Sangwa Sherap, and to begin with she played an important part in the practice of the Sakya school. In the fifteenth century, she was ‘appointed’ Dharma protectress of Ganden, one of the great Geluk monasteries, by the first Dalai Lama. Ever since then she has been a special protectress of the Dalai Lamas.

The fifth Dalai Lama wrote instructions for meditating upon her, and a thangka of Sridevi travels with the Dalai Lamas wherever they go. For centuries this thangka was kept unseen in its red case, but in 1940 the present Dalai Lama, then aged about seven and on his way to be enthroned, was met close to Lhasa by a great crowd of officials and notables, including his three main servants, one of whom had brought the thangka, hidden as usual in its case.

On seeing it near the entrance to his tent, he promptly grabbed it, took it inside, and opened it. The thangka which had not been unveiled for so long was revealed. The Dalai Lama surveyed it and then replaced it in its case. Everyone present was amazed by what he had done.

Sridevi also has in her retinue a type of female protectress known as mahakatt. They are generally mounted on horses or mules, with goatskin bags of poison hanging from their saddles. They have bows and arrows, and lassoes made of snakes. They each wear a mirror, in which all one’s karma is reflected. They are swift-acting and ferocious against enemies of the Dharma. 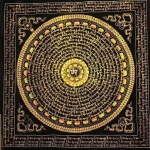 This beautiful Mantra Mandala is hand painted by the Artist in Bhaktapur, Nepal. This is one of the important Buddhist Mandala for focusing.
Buy mantra mandala Online