Way to Heaven – meaning and symbolism

Way to Heaven – meaning and symbolism

The way to Heaven is also known as a way to Nirvana. Way to heaven gives deeply symbolic meaning and explanation of the path to enlightenment.

Symbols in way of heaven

The way to heaven consists of different symbols which have different meanings. This illustration of the development of mental tranquility is often painted on monastery walls. This mnemonic diagram depicts the nine progressive stages of mental development, which are obtained through the six powers of study, contemplation, memory, comprehension, diligence, and perfection.

Beginning at the start of the path in the lower right, the diagram shows a monk chasing, binding, leading, and subduing an elephant whose color progresses from black to white.

The way to complete control of one’s mind, each blend represents one of the six powers.

The elephant represents the mind, and its black color the gross aspect of sinking or mental dullness. The monkey represents distraction or mental agitation; and its brown color, scattering.

The black elephant follows the path of heaven and at the end of the path, it becomes a white elephant.

At the end of the path single-pointed concentration is attained, and the ‘purified elephant’ of the mind is now completely submissive.

The monkey represents distraction or mental agitation; and its brown color, ‘scattering’.

The flying monk represents bodily bliss; and his riding of the elephant, mental bliss.

Riding the elephant back triumphantly across the rainbow, wielding the flaming sword of perfect insight having attained the flame of clear understanding and mindfulness, represents the uprooting of samsara by the unity of shamatha and vipashyana which directly realizes emptiness.

At first, the monk starts leading the elephant. The monkey now follows the elephant rather than leading it and the rabbit disappears. Finally, the mind is under control and pacified. After also the monkey leaves the elephant and stands behind the monk saluting him with reverence.

The rabbit represents the fluctuation of the mind.

In this stage, the rabbit turns and look at the monk to indicate that distractions acknowledge who is in charge.

The stick is to control the elephant.

The five objects or causes of mental agitation are listed below:

The fire represents the struggle for control which reduces through familiarity. After, the final stage (in the cave), bliss and ecstasy(a state of elated bliss) are reached using the realization of the wisdom of emptiness to banish(drive away) ignorance.

Samatha or “Shamatha” means calm and with Vipassana is one of the fundamental meditation practices of the Tibetan Buddhist tradition.

This is a very unique diagram of the stages of Shamatha, or “tranquil abiding” meditation which is often painted on monastery walls. Sometimes called the “Way to Nirvana”. Primary consciousness itself is pure, yet habitual tendencies gated over countless lifetimes have ensnared the mind in the 51 secondary mental consciousnesses. These habitual thought processes, which can be positive, neutral or negative, cause the mind to dwell continually in a state of unfocused distraction.

The practice of shamatha meditation develops the ability to focus the mind in single-pointed equipoise or perfect concentration and is a prerequisite for the development of vipashyana or analytical insight meditation. 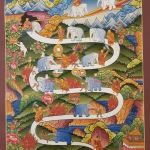 This is thangka about a way to heaven, which is a long period of deep study of full understanding. In brief, this is the interpretation of the various symbols.
Buy Way to Heaven Thangka Painting