Describing Buddhist Deity Vajrayogini in the form of Vajravarahi 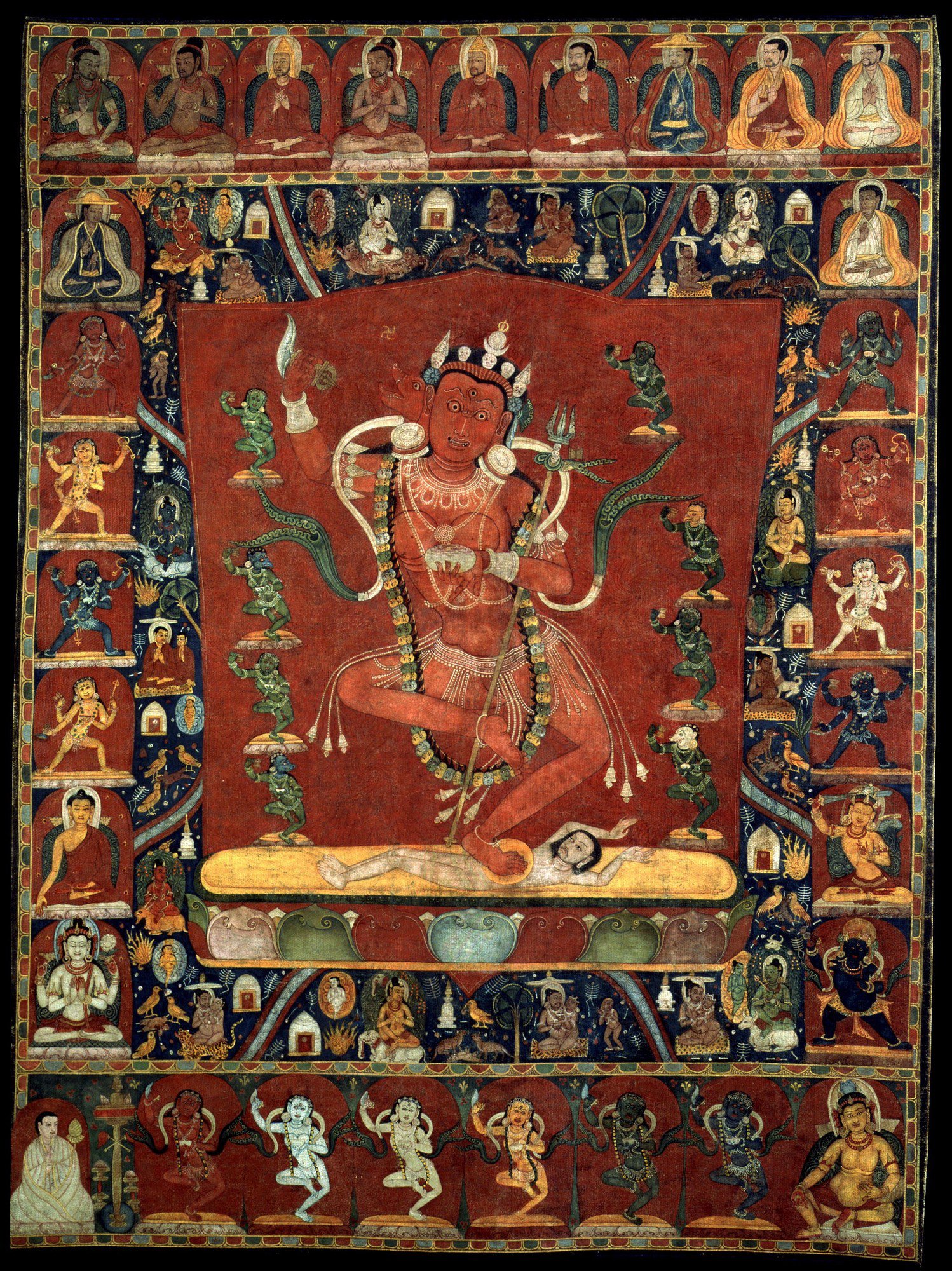 Describing Buddhist Deity Vajrayogini in the form of Vajravarahi

Vajrayogini appearing in the form of Vajravarahi is one of the most popular Tantric female deities found in all traditions of Tibetan Buddhism. In this guise, she actually has either a single boar’s face, or two faces or heads, two or more hands, and legs, red, yellow, or black in color, standing in a dancing posture, or both legs down.

Vajravarahi Vajrayogini is accompanied by 24 Dakinis, Sahaja Chakrasamvara above, and two monastic figures below. Vajravarahi, along with numerous variations in appearance such as Vajrayogini and the Fierce Black One.

Vajravarahi Vajrayogini remains one of the most popular and special tutelary deity practices arising from the Chakrasamvara cycle of tantras belonging to the wisdom class of Anuttarayoga Tantra. These various forms are practiced in all the Sarma Schools, Sakya, Kagyu, and the like.

Iconography of Vajrayogini in the form of Vajravarahi

Vajravarahi Vajrayogini is red in color. She is slightly peaceful and slightly wrathful in appearance. She has one face and two hands.

The left hand of Vajravarahi Vajrayogini holds a skullcup. The bend of the elbow cradles a vajra katvanga staff. She wears crowned with a tiara of five skulls the black hair of the head flows downward behind.

She is adorned with gold earrings, necklaces, bracelets, and a girdle with decorative tassels. she wears a garland of fifty fresh heads. She is draped across the shoulders is a long scarf of yellow and green. The right leg of Vajravarahi Vajrayogini is raised in a dancing posture.

The left leg of Vajravarahi Vajrayogini presses upon a small red sun disc atop a prone yellow figure. She is surrounded by a large red sphere of tightly swirling flames of pristine awareness fire. 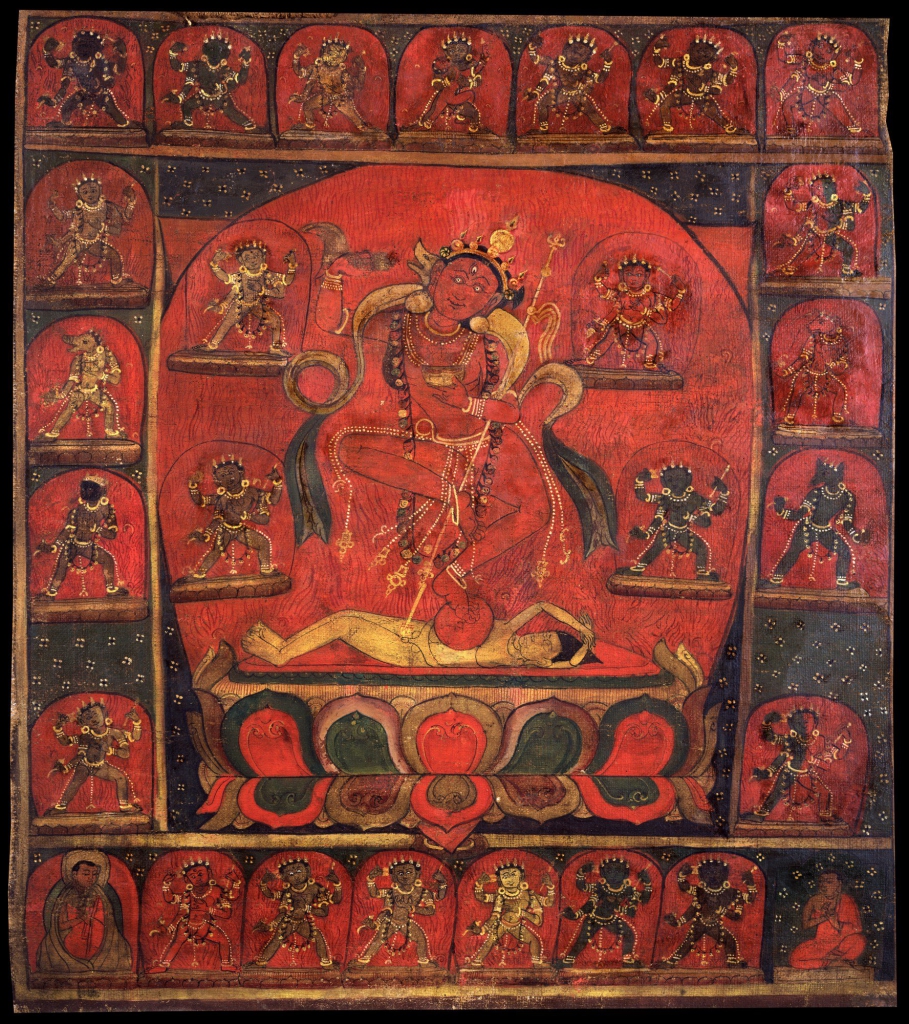 By depicting this thangka, we are going to learn about the presentation of Vajravarahi Vajrayogini with Attendant Dakinis and Heruka.

Attendant Dakinis is presented within the sphere of the thangka. Attendant Dakinis such as yellow Rupini, red Khandaroha, green Lama, and blue Dakini are presented.  Each has one face and four hands. They are Wearing the same ornaments and standing firmly with both legs.  Each of them is surrounded by a circle of fire.

Heruka is presented at the top center of the thangka.  Heruka is in the form of Sahaja Chakrasamvara. Heruka is blue in color.

Heruka has one face and two hands holding a vajra and bell embracing the consort.

By depicting this thangka, we are going to learn about the presentation of Vajravarahi Vajrayogini with Yellow Rupini, green Lama, Dakini, and Dudul Dorje, etc. 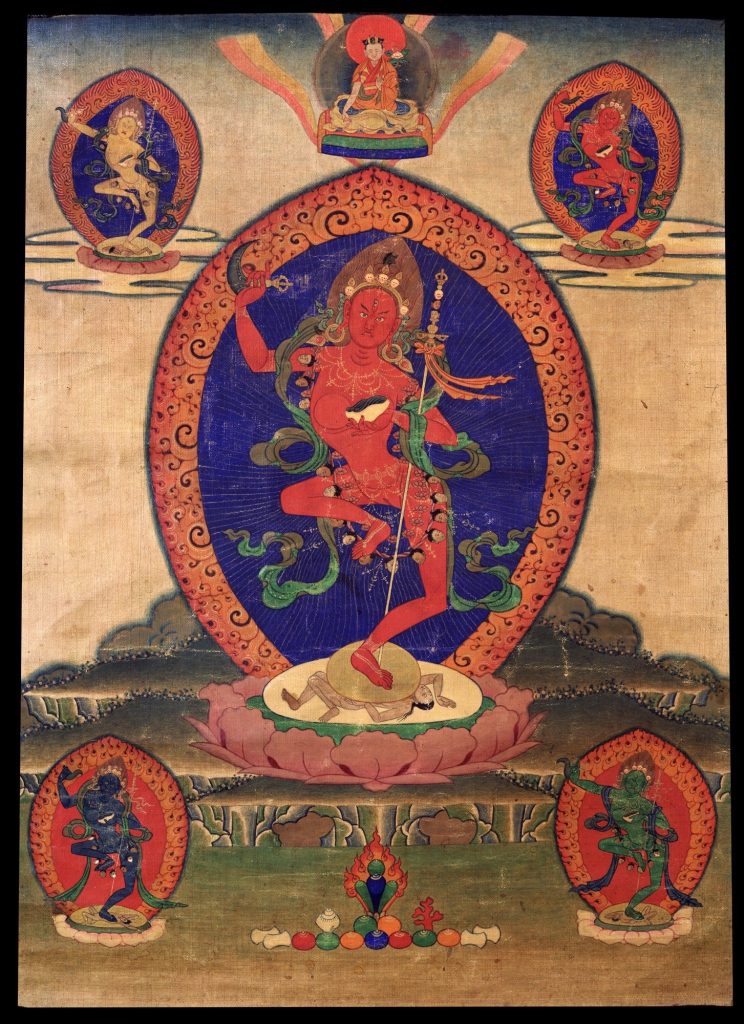 Red Khandaroha is presented at the top right of the thangka.  red Khandaroha means something in Buddhism, pali, Hinduism, and Sanskrit.

Yellow Rupini is presented to the left of the thangka.

Green Lama is presented at the bottom right of the thangka. Green Lama is a fictional pulp magazine hero of the 1940s. He is commonly portrayed as a powerful Buddhist Lama.

Dakini is presented to the left of the thangka. Dakini is dark blue in color. Dakini is adorned with an offering display of wishing jewels, red coral, white conch, and gold ingots.

The top of the head of Dudul Dorje is adorned with a black vajra crown. Dudul Dorje is enveloped in spheres of light and ascending rainbow streams. He sits on a cushioned seat indicating his earthly status.