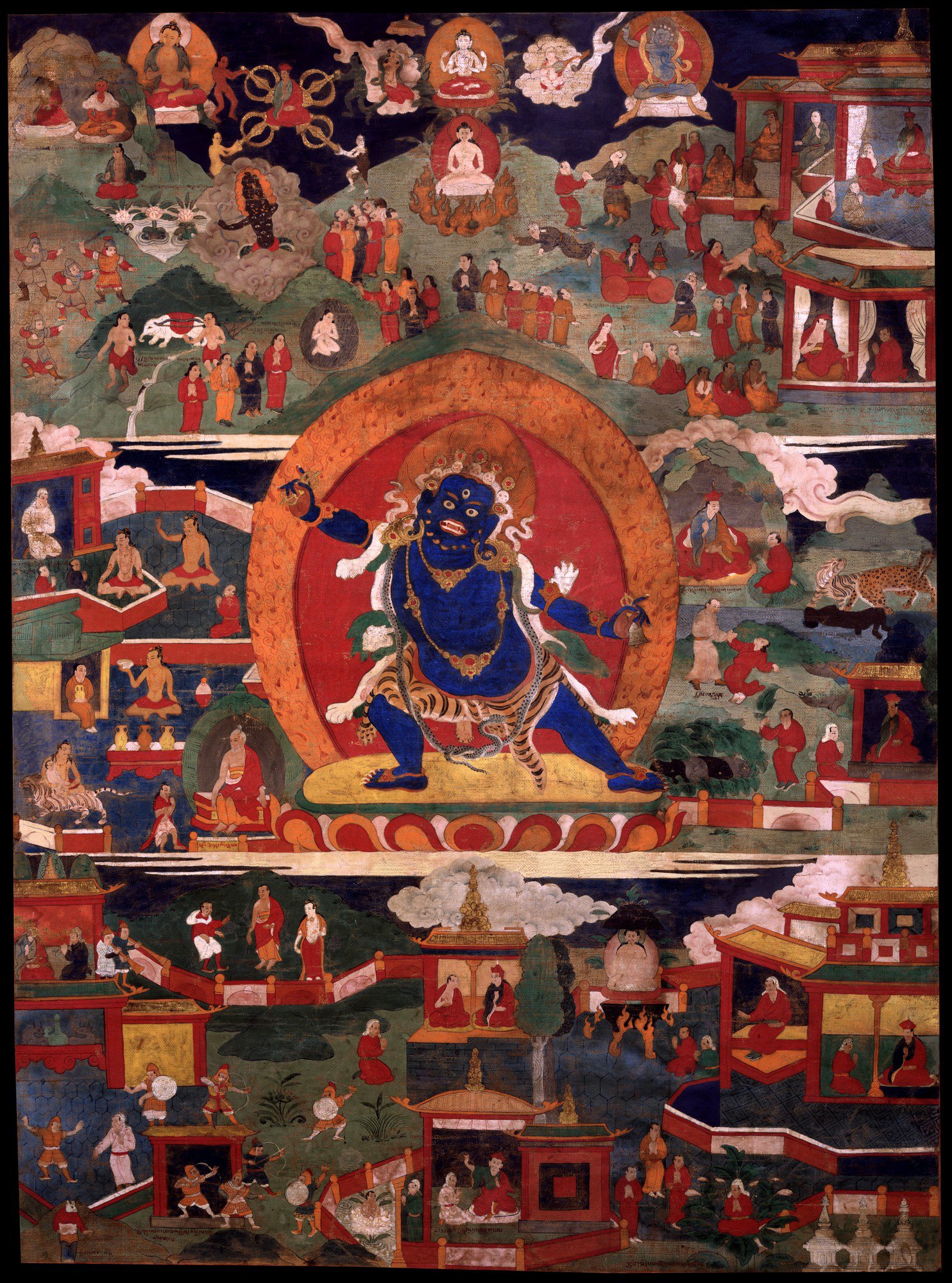 In this section, we are going to learn about the Life of Senge Dradog, after that, the short etymological description of the word Senge Dradog itself.

Guru Senge Dradog is known as defeats the attackers on Dharma throughout the six realms of beings.

Senge Dradog is known as Guru Lion’s Roar in English.

In the iconography of Senge Dradog, we are going to learn about his body posture, hand and leg gesture, and different representations of Senge Dradog in thangka and statue.

Senge Drado is adorned with a skull crown, gold ornaments, a necklace of severed heads and an elephant, and human skin tied about the neck he wears a tiger skin as a skirt. Senge Dradog is standing atop a sun disc and multi-colored lotus. Senge Drado is surrounded by the bright orange flames of pristine awareness. 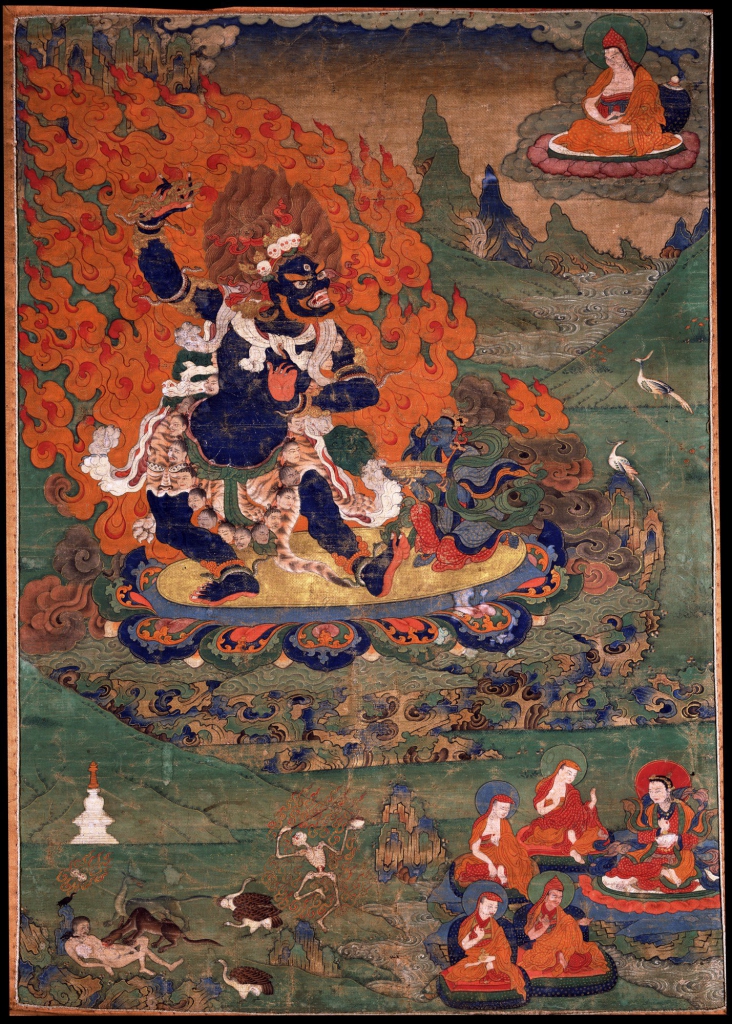 By depicting this thangka, we are going tolearn about the presentation of Senge Dradog with different deities such as Shantarakshita, Lama,  Caitya, and Padmasambhava, etc.

The Lama is presented at the upper right of the thangka. Lama is wearing monastic robes and a red Pandita hat. In the right hand, he holds a kila (ritual peg).

In the left hand, there is placed in the mudra of meditation. Lama is seated above a moon disc and lotus.

The Caitya is presented to the upper left of the thangka. It is a funerary monument. Caitya is known as worshipful in Sanskrit. It is said to be the natural homes of earth spirits and were most often recognized in small stands of trees or even in a single tree.

According to Jaina and Buddhist texts from about 200 BC, wandering Indian ascetics often gathered near caityas to beg alms from local religious pilgrims and to pay homage to the deities residing therein.

Later, the term stupa assumed the distinctive meaning of a meeting place or meditation grove for mendicant renunciates and a pilgrimage center for the laity.

Padmasambhava is presented at the lower right of the thangka. Padmasambhava refers to Guru Rinpoche’s birth from a lotus in the land of Oddiyana. He is the founder of Tibetan Buddhism and the Buddha of our time.

Simhanada represents the period when He remained for 5 years in a charnel ground teaching to the Dakinis and others. At this time he also defeated in the debate the Tirthakas from South India. 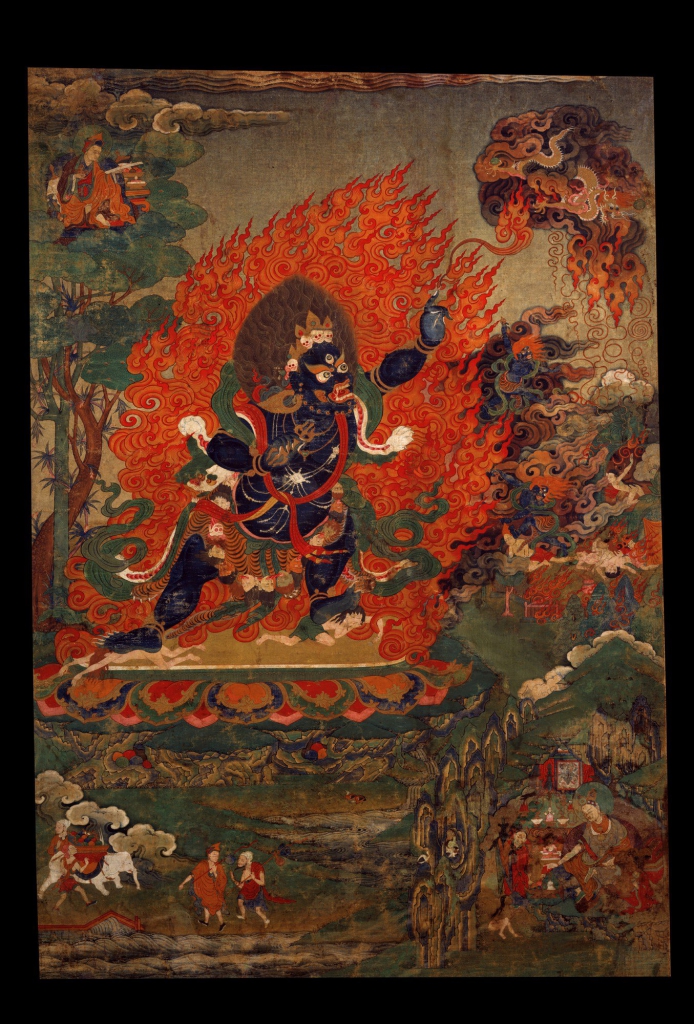 The Vidyadharas were the first teachers in the human lineage for the Eight Heruka Deities of the Nyingma Tradition. Prabhahasti received the Vajrakila Tantra.

Yeshe Tsogyal is presented at the bottom right corner of the thangka. She is in seated position and also known as ye shes mtsho rgyal in Tibet.

She is the highest female in the Nyingma Vajrayana lineage. She is known to have revealed terma with Padmasambhava and was also the main scribe for this terma. Later, she also hid many of Padmasambhava’s terma on her own, under the instructions of Padmasambhava for future generations.