Techiques of Paint Preparation and Application in Tibetan Art 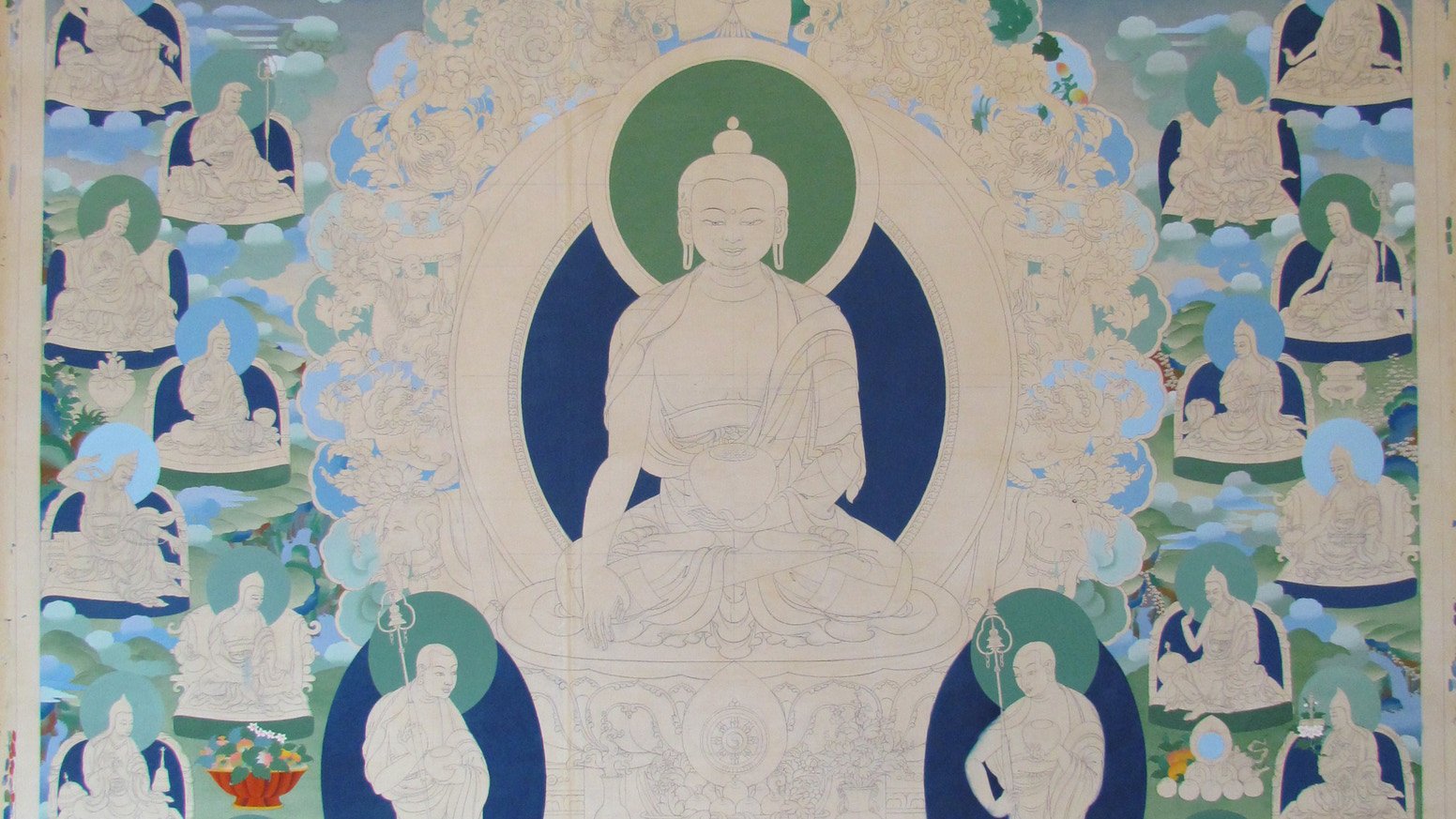 Techiques of Paint Preparation and Application in Tibetan Art

After cleaning the pigment it had only to be mixed with the binder to become paint. For blending a pigment and binder you can simply mix it.

Each had to be collected from its source in different areas of Tibet, cleaned, ground, powered, crushed or cooked.

Blending is the primary step. You can start it by putting some ground pigment into a clean paint pot. The paint pot can be simple bowl, but for the preparation of more costly pigments a non porous paint container such as a porcelain cup or a clam shell should be used used.

To the ground pigment you can add a little warm size solution, enough to make it somewhat damp but not saturated. Then, using a blunt ended wooden stirring stick or fingers, thoroughly kneaded the dampened pigment, crushing any lumps and bringing the mixture to the consistency of dough made from the flour of parched barley.

Having rolled this dough like mass into a ball, then pour a little more warm size into the bowl and mixed it with the dough until it became a thick and homogeneous liquid.

At this stage the paint will look like stirred yogurt.

At last you need to add just enough size to bring the paint to the’ right thickness for painting, carefully stir it until it is completely mixed. The ideal consistency is said to be like buttermilk. 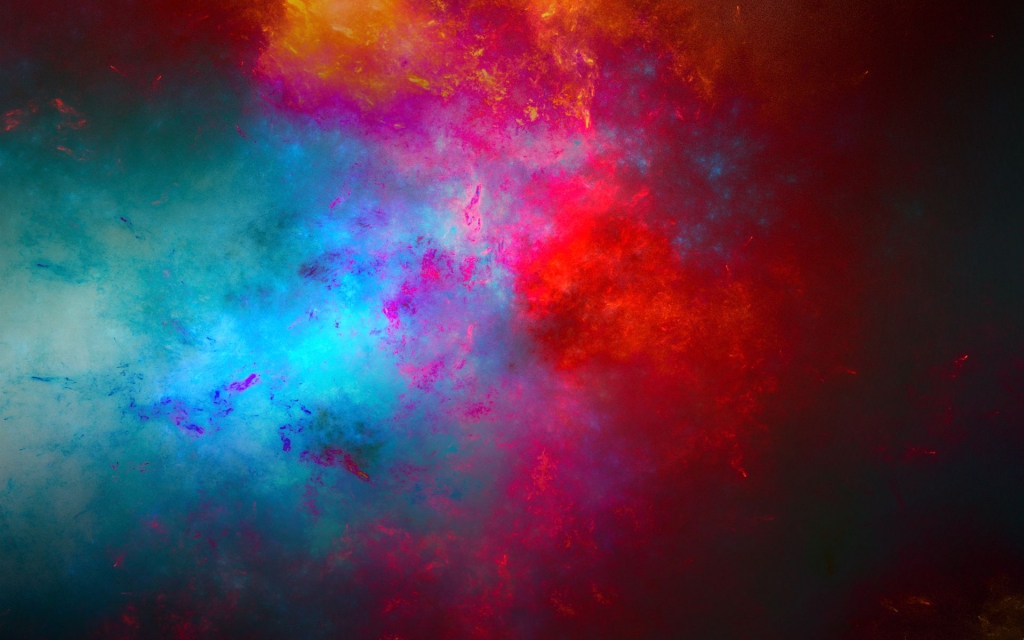 After a paint had been newly mixed in this way it could be tested and then immediately applied. Often, however, you have to remix the colours from paints that were left over from previous days.

In such cases you can face with an old pot of paint that had either partially dried out, creating a crusty surface with a soft bottom layer, or completely solidified into a rock hard mass.

To prepare new paint from old you need to begun by crushing the dried paint into small pieces.

Gradually adding size as necessary, and grinding the mixture with a stirring stick until it became perfectly smooth.

If the paint had dried rock hard and you are in a hurry to reconstitute it, you can soak it under hot water, which quickly softened it. After soaking, the excess surface water had to be poured off before the paint is stirred again.

If the hot water had blended with the paint to such an extent that it could not be poured off without losing a lot of paint, the artist had to pour out as much clear water as possible, and then evaporate the rest by heating the paint bowl over glowing coals. When the paint had become almost dry then you can reconstitute it by gradually adding dilute size solution and stirring.

Mixing and heating the paints is something that you can do from time to time during the day. At the beginning of work in the morning the size it had to be heated up, and afterwards throughout the day it is kept warm over coals until it is needed, for if it is left to cool it would congeal. In the course of painting, too, you have to add a little warm size every now and then to keep the paint at its optimum consistency.

Testing the Strength of the Paint

As the final step before applying the colours to the painting surface, it is a good idea to test the paint one last time to make sure that it contained the right amount of binder.

For this purpose you can apply a small amount of each paint with his brush to unused portions of the painting surface.

In thangkas these testing spots are usually the strips of prepared canvas on each side of the rectangular painting area.

Having applied a little paint, you could first judge its characteristics by noting how long it took to dry. At normal temperature and humidity, if the paint dried very quickly there is not enough size if a very long time elapsed there is too much.

After it had dried, the artist could judge its strength by rubbing it with finger or scratching it with his fingernail. If it rubbed off or is easily chipped by the fingernail, more glue is necessary. A brittle, rough texture often indicated an excess of glue.

Finally, the surface appearance of the dried paint could also tell the artist something a slick or glossy surface meant that there is too much binder, while paint mixed to the right proportions is usually matte in appearance.

The application of the first coats of paint generally followed a fixed progression of colours. That progression itself can best be understood in terms of four main principles that governed the order of painting.

To begin with, there is the principle that the distant planes of colour within the composition should be painted before those in front.

Most thangkas had at least three planes in their composition. The most distant is the sky. Also distant, but less remote than the sky, is the landscape.

The closest plane is that occupied by the deities. By proceeding from distant to near the painter could impart sharper edges to the forward areas by slightly overlapping each underlying area with the edge of the subsequent colour.

Painting in such a progression is not always crucial, since in many areas the painter would later sharply define the edges by dark outlining.

However, when painting certain objects that traditionally received no outlining, such as clouds and some types of flowers, our main informants always applied the base coats to those areas after the surroundings had been painted.

The second main principle could be called “economy of effort in paint mixing”. Having mixed a certain colour, artists tried to apply it to as many areas as possible, so that they would not have to mix the same colour several times in the course of one painting.

The desire for efficiency is carried to an extreme by painters who sometimes adopted an assembly line approach, when they would paint many copies of the same thangka at the same time.

Such painters would begin by preparing several canvases and establishing on them six or eight painting areas of the same size. The same number of sketches followed, often with the aid of a stencil.

The painters then began their painting by colouring all the skies, then all the landscapes, and so on through the remaining steps of painting.

Six or eight paintings at a time is indeed an extreme example, but it is very common to see two or three paintings (often different compositions) at the same stage of completion being painted in this way to achieve maximum efficiency.

The third main principle that governed the order of initial colouring concerned shading technique. Usually most shading or tinting is done by applying darker shading washes over a lighter base colour.

This sequence is important to the painter during the application of the first coats of colour since the lightest colour of any area to be shaded had to be laid down first.

The fourth principle governing painting order is that important areas, especially those painted with light colors, should be applied last.

The face and body of a white deity, for instance, are prone to be smudged by the artist’s hand if they are applied at an early stage.

Since most of the important areas are in the foreground this principle is in harmony with principle number one.

However, some painters for the same reason painted all faces and bodies last even those that are blue and green and this ran counter to the principle of economy in paint mixing. 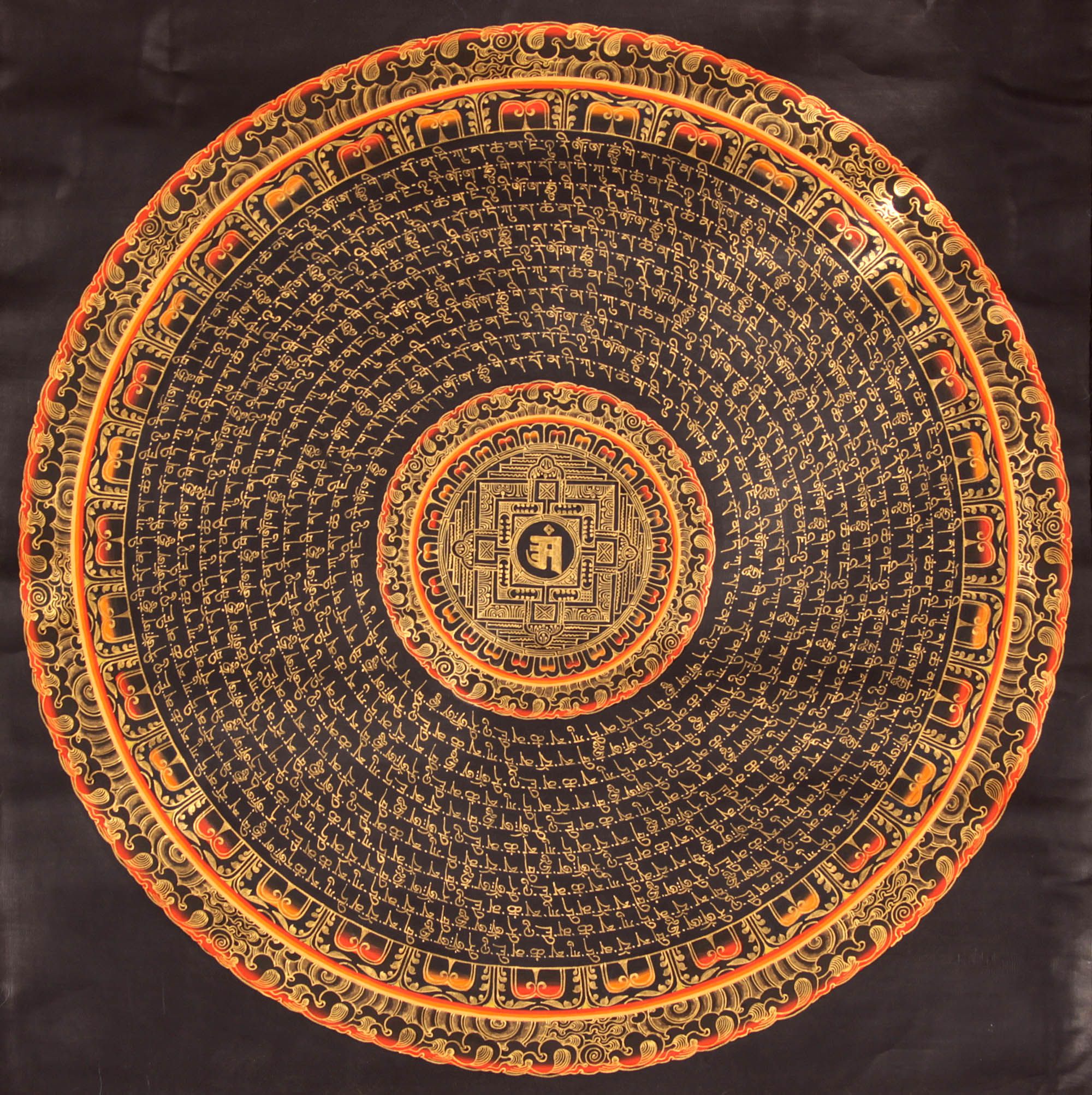