All You need to know about Jivamukti Yoga All You need to know about Jivamukti Yoga

The Jivamukti Yoga method is a proprietary style of yoga which is created by David Life and Sharon Gannon in 1984. Jivamukti is an ethical, physical, and spiritual practice that fuses vigorous yoga exercises with adherence to five central tenets. Many celebrities follow this Yogic Style over time.

For spiritual, psychological, and physical growth, the fusion of five principles with Hatha Yoga is crucial. So this is obvious to experience an overall transformation in your behavior by mastering this technique of Hatha Yoga.

David Life and Sharon Gannon met in New York City in 1983 in the most Bohemian way possible. When her band played at his restaurant which was known as the iconic Life Cafe in the East Village. They were both deeply involved in art, music, and the 80s counterculture.

Both of them began to practice yoga together. In 1984, Life and Gannon founded Jivamukti which was one of the first hybrid yoga styles to emerge in the United States. Jivamukti is a hybrid because its methodology and philosophy synthesize elements from the teachings of several different gurus.

Life and Gannon consider their three most influential teachers to have been Swami Nirmalanda, Ashtanga guru Sri K. Pattabhi Jois, and Shri Brahmananda Sarasvati. The name Jivamukti was inspired by a Sanskrit word that means “liberation while living.” For many years, Jivamukti stayed close to its East Village roots, first on 2nd Avenue and 10th street and later on Lafayette Street.

Jivamukti Yoga was co-founded in New York in 1984 by dancer and musician Sharon Gannon and her partner, artist and cafe owner David Life. Gannon and Life met in 1982 in Manhattan. In 1986 they traveled together to India and took the Sivananda teacher training program and met Swami Nirmalananda.

When they returned from India, they opened the first Jivamukti Yoga Society in the East Village of New York City. In 1990 they began to practice Ashtanga Yoga with Pattabhi Jois in Mysore, India. In 1993, in upstate New York, they met yoga scholar and ashram founder Shri Brahmananda Sarasvati (Yogi Mishra).

In 1998, having become wildly successful, the yoga center moved to a 9,000 square feet (840 m2) studio on Lafayette Street.  Some 400 people subscribed and annual membership at that time cost $1200 rather more than a typical gym. Stefanie Syman ascribes Jivamukti’s “surprisingly profitable” business with its merger of “overt spirituality, the chanting, the deities, and the sacred music and vigorous asana classes” to the culture at that moment in history which is comparable to America of the late 1910s and early 1920s.

In 2000, Jivamukti opened a second center on the Upper East Side. In 2003, senior Jivamukti students Patrick Broome and Gabriela Bozic opened Jivamukti Munich which was the first Jivamukti Yoga Center outside of New York City. In 2006, the Jivamukti Yoga School NYC relocated their main headquarters to an environmentally constructed studio in Union Square.

Jivamukti Yoga has developed a reputation as the chosen yoga style of many celebrities. The name Jivamukti is an adaptation of the Sanskrit  Jivanmuktih, where jiva is the individual living soul, and Mukti – like moksa – is liberation from the cycle of death and rebirth. Thus the Jivamukti method is “liberation while living”.

Some of the  benefits of doing Jivamukti Yoga are:

There are five tenets of Jivamukti Yoga. They are:

The first tenets of Jivamukti Yoga are Scripture (Shastra). Shastra or scripture refers to the study and analysis of the four central texts of yoga discipline. This also refers to the study of the Sanskrit language in which they were primordially written.

The four central texts are the Yoga Sutras of Patanjali, the Hatha Yoga Pradipika, the Bhagavad Gita, and the Upanishads.

The second tenets of Jivamukti Yoga are Devotion (Bhakti). Bhakti means “Devotion to the Divine, which is practicing devotion and humility. Jivamukti Yoga is based on God-realization which is the purpose of yoga practice.

Signifying that bhakti does not pertain to a particular religion or God, Bhakti is meant to direct the devotion to the divine in any form. Devotion should be aimed at something higher than your own ego.

The third tenets of Jivamukti are Nonviolence (Ahimsa). Yoga Ahimsa is practicing nonviolence or non-harming. Ahimsa teaches you compassion.

Ahimsa is the first of the five Yamas in Patanjali’s Yoga Sutra. Yamas define how you can be a yogic person and how can you relate to other people and external surroundings. Methods of Jivamukti teach you how practicing ahimsa can extend not only to humans but for animals too.

This is the reason why Jivamukti Yogis are taught veganism. Through Jivamukti Yoga, you are more aware of animal rights, environmental concerns, and the need or measures to act to their support.

The fourth tenets of Jivamukti are Music (Nada Yoga). Nada yoga emphasizes on deep inner listening, chanting, and elevated music to bring you to a calm state. The Nada yoga base principle is centered at the fact that everything that exists, including human beings, consists of sound vibrations, called nada.

Hatha yoga aims to hear the Nadam – the soundless speech which is Om (Aum)–by first perfecting the ability to listen. Jivamukti Yoga allows you to practice Nada Yoga through chanting and inspirational music involved during meditation.

The fifth and the last tenets of Jivamukti are Meditation (Dhyana). Dhyana(Meditation) is the practice of being still and observing one’s own mind and thought process. This ancient yogic practice is intended to enable you to cease to identify with your thoughts and realize that you are more than your thoughts.

Thoughts are what control your mind and your body. Meditation is a fundamental part of Jivamukti yoga to help you develop consciousness about your own existence and purpose. Meditation is included in every Jivamukti class.

Some of the poses of doing Jivamukti Yoga are: 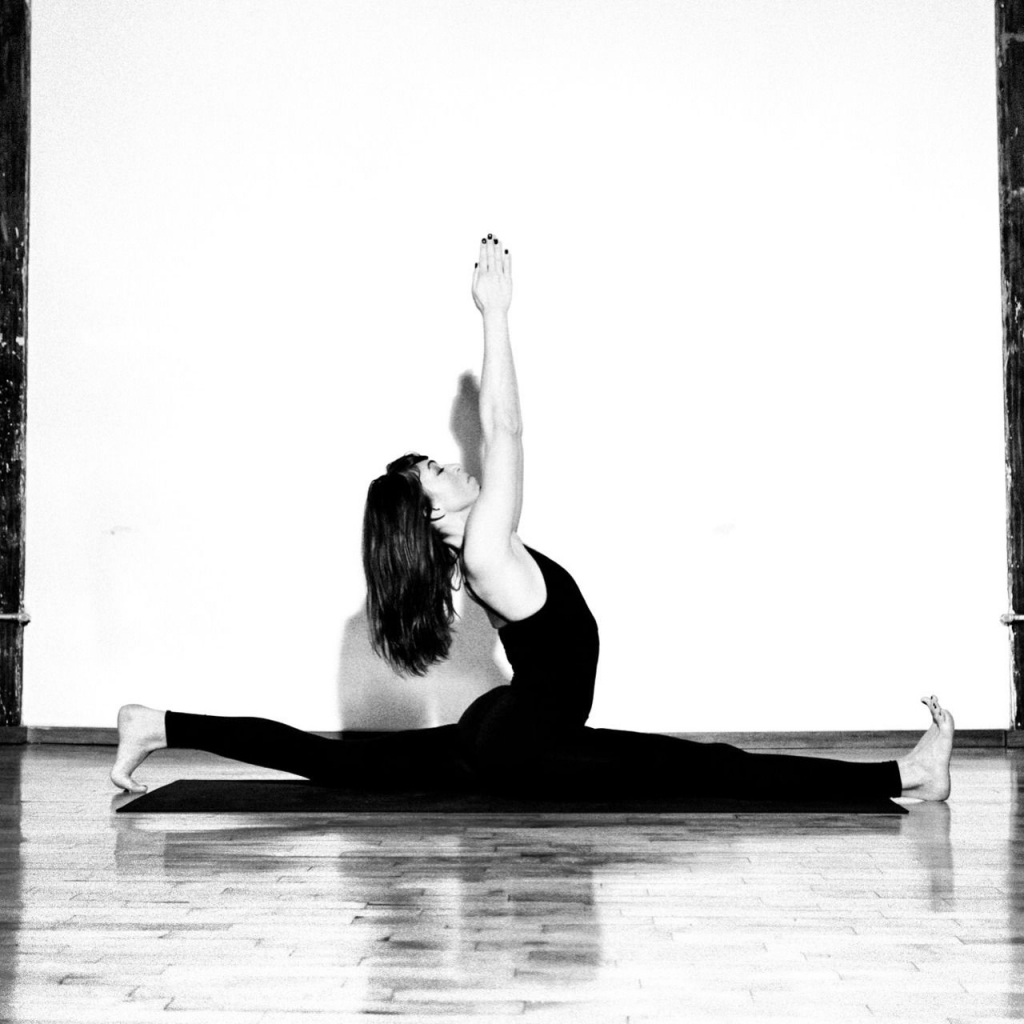 The first pose of doing Jivamukti Yoga is Monkey Pose (Hanumanasana). This pose is named after Hanuman, a figure in Hindu mythology. This pose requires a high level of flexibility to fully execute because the end position essentially involves doing a split with your arms raised towards the ceiling.

There are, however, phases and steps you can follow to do the pose to avoid muscle strain and work only within your limits and ability. The second pose of doing Jivamukti Yoga is Dancing Shiva Pose (Natrajasana). The Dancing Shiva Pose is also known as the King Dancer Pose which is one of the yoga poses that really test your balance, focus, and concentration. It requires the ability to shift and balance all your weight on one leg.

While slightly bending forward from the hip and the other leg is held up behind by your hand. Depending on your level of flexibility, you can grasp your ankle or reach for your toes by stretching your arm backward and raise your other arm in front of you to help with your balance. The third pose of doing Jivamukti Yoga is Bow Pose (Dhanurasana). The Bow Pose is performed in several styles and types of yoga classes because it effectively and simultaneously works different muscle groups and parts of the body like the arms, glutes, core, and legs. The Bow Pose basically involves lying face down on the mat and then lifting your chest and legs off the floor with your arms stretched out behind you and hands grasping the ankles to hold the legs up.

This pose requires balance and upper body strength, so don’t fret if you take time learning to do and successfully perform this pose. The fifth and the last pose of doing Jivamukti Yoga is Hero Pose (Virasana). The Hero Pose is a good starting off point for breathing exercises and meditation. This is one of the simpler Jivamukti Yoga poses and is effective in bringing relief to tired legs.

To do this pose, simply sit on the mat with your legs folded underneath your buttocks. This pose often transitions to a Reclining Hero Pose in which you lower your upper body back towards the floor while keeping your legs in a folded position underneath y.