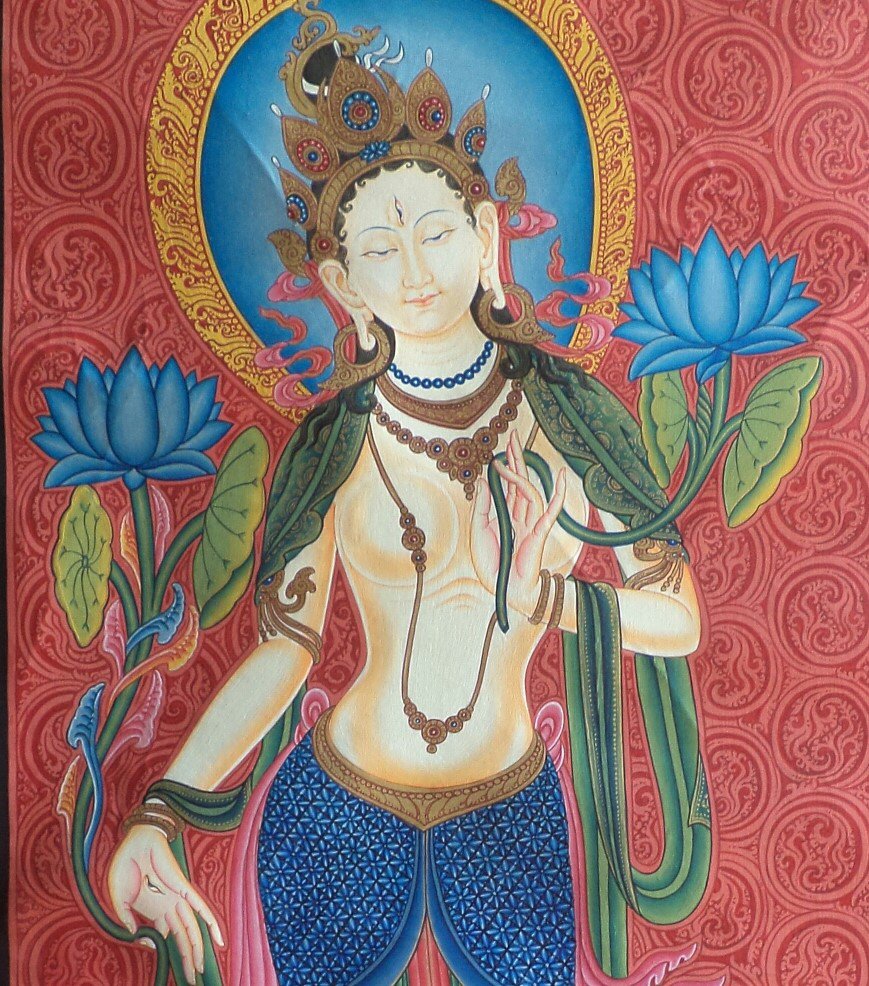 White Tara Buddhist Bodhisattva. She is the one form of 21 manifestations of Tara. White Tara is also called as Autumn Moon.

Green Tara and White Tara are probably the most popular representations of Tara.

In Hinduism, White Tara is known as Saraswati. She is associated with longevity.

White Tara counteracts illness and thereby helps to bring about a long life. She embodies the motivation that is compassion and is said to be as white and radiant as the moon.

She is the healing goddess of nurturing quality and fertility and expresses maternal compassion and offers to heal to beings who are hurt or wounded, either mentally or psychically.

The mantra of White Tara

There are 7 different forms of white tara. They can be differentiated by their presentation, mudra, color, and symbolism.

The different types are listed below:

The distinguishing feature of this form of Tara is that she sits in the Ardhaparyahka attitude and is surrounded by ten goddesses originating from the ten syllables of the Tara mantra: Om Tare Tuttare Ture Svaha.

These ten deities are identical in appearance with the principal deity.

The distinctive feature of this form of Tara is that she bears a wheel on her chest. She is absolutely unattended and sits in the Vajraparyaiika attitude.

Caturbhuja-Sitatara form is similar to an emanation of the Dhyani Buddha Amoghasiddhi. She has four arms and exhibits in the first pair of hands the Utpala mudra, and the lotus, and the Varada pose in the second.

She may be recognized by the presence of two goddesses, Mahamayurl.

As she bears the image of Amoghasiddhi on the crown, her form has already been described. She is three- faced and six-armed and has no companions.

Visvamata has been described in the Sadhanamala as one-faced, with the white complexion of the moon, white garments and a white serpent as her Vahana. She carries the white lotus in the left hand and exhibits the Abhaya pose in the right. She has not been described as bearing an image of her sire.

Kurukulla as an emanation of Amitabha of red color generally assumes the red color, but when two-armed, she has, according to the Sadhanamala the white color. She carries the rosary and the bowl of lotus, and her Vahana is an animal.

Janguli as an emanation of Aksobhya ought to be of blue color, but according to the Sadhanamala, she may have three colors, white yellow or green. When white she is one-faced and four-armed, plays on the Vina with the first pair of hands, and shows the white serpent and the Abhaya pose in the second. 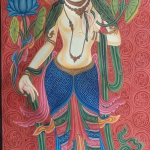 White Tara is “mother of liberation”, and represents the virtues of success in work and achievements. White Tara, also known for compassion, long life, healing, and serenity; also known as The Wish-fulfilling Wheel, or Cintachakra.
Buy Beautiful White Tara Thangka