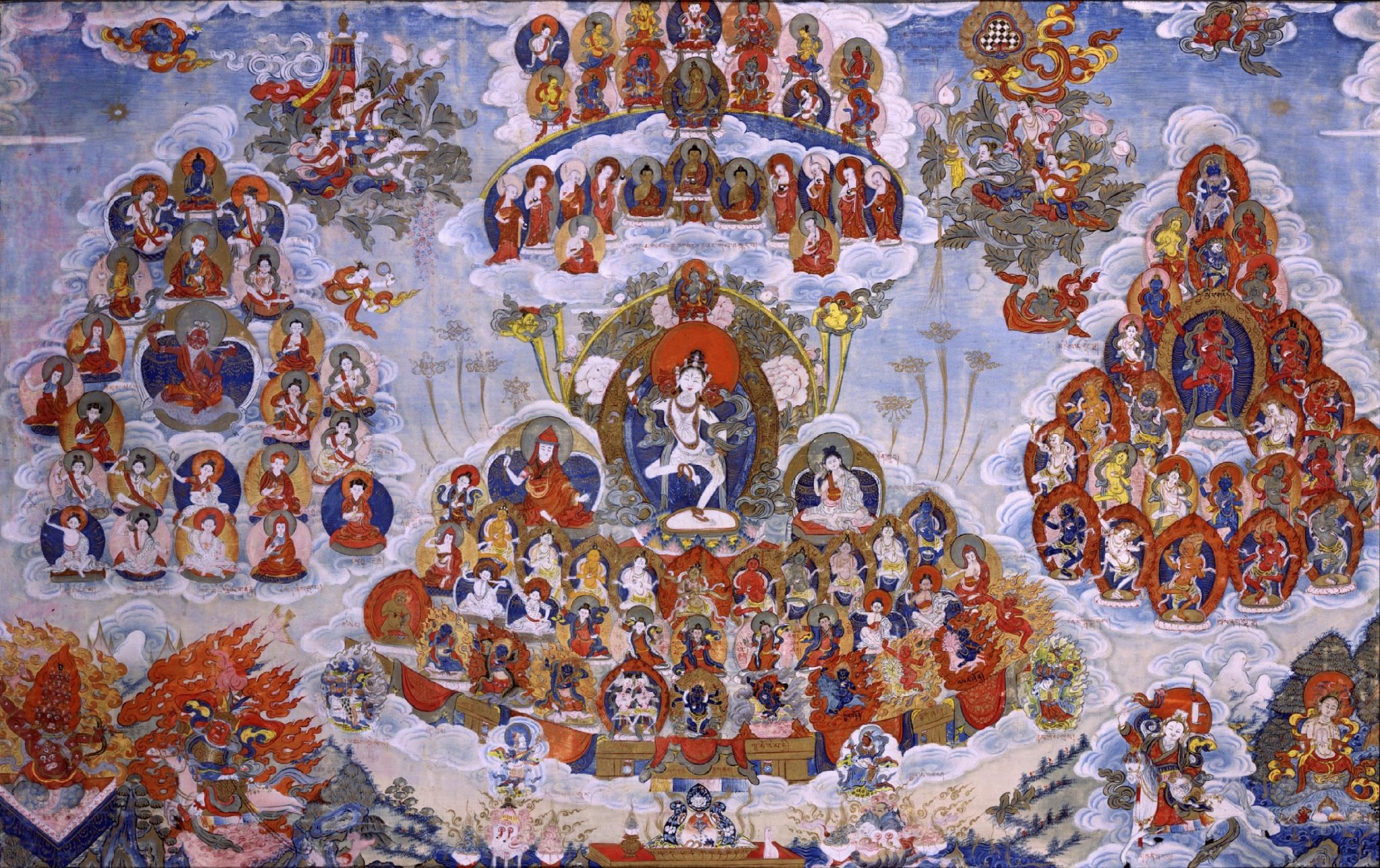 This is mid-20th-century painting of Machik Labdron and the Chod refuge field displaying teachers and deities. 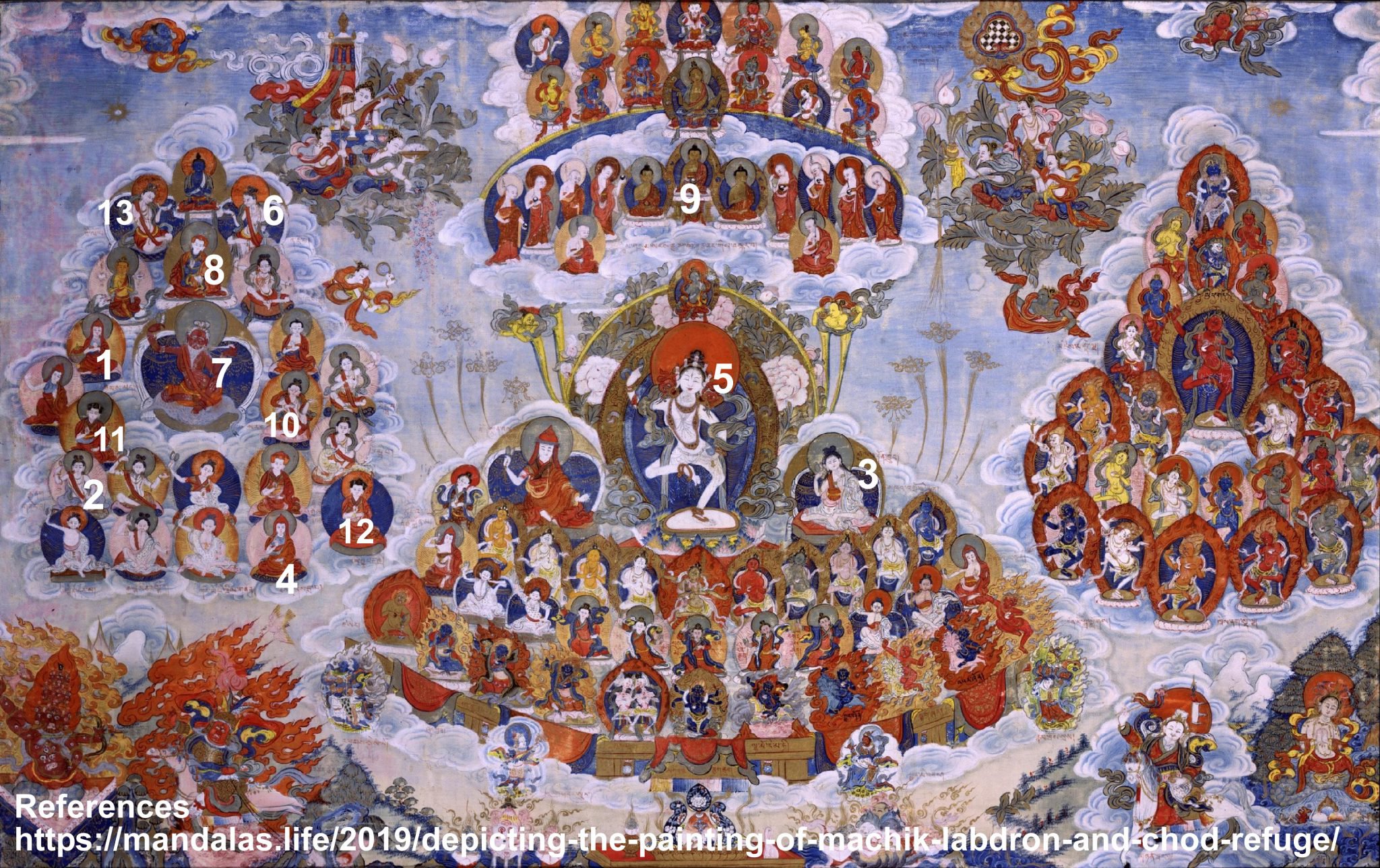 Asaṅga was “one of the most important spiritual figures” of Mahayana Buddhism and the “founder of the Yogacara school”.

Traditionally, he and his half-brother Vasubandhu are regarded as the major classical Indian Sanskrit exponents of Mahayana Abhidharma, Vijñanavada (awareness only) thought and Mahayana teachings on the bodhisattva path.

Gyalwa Dondrub is the first son of Machik Labdrön, together with his younger brother Tonyon Samdru. He became a lineage holder of his mother’s teaching of Chod.

One of Machig Labdrön’s teachers, Sönam Lama, gave her the tantric name of Dorje Wangchuma which means “Diamond Independent Goddess.”

Kyoton Sonam Lama is the disciple of Machik Labdron, gives her the pith instruction on using the nature of demons to free herself not only from petty dualism but also from even the slightest whisper of self-cherishing.

As a sign of her subsequent freedom form attachment, she gives up her orderly life as a nun and becomes a yogini, roaming the land, visiting the charnel grounds, and showing no concern for appearance, society, or property.

Machig Labdron may have come from a Bon family and, according to Namkhai Norbu, developed Chod by combining native shamanism with the Dzogchen teachings.

Other Buddhist teachers and scholars offer differing interpretations of the origins of Chod, and not all of them agree that Chod has Bon or shamanistic roots.

Naropa or Abhayakirti was an Indian Buddhist Mahasiddha. He was the disciple of Tilopa and brother, or some sources say, partner and pupil, of Niguma.

As an Indian Mahasiddha, Naropa’s instructions inform Vajrayana, particularly his six yogas of Naropa relevant to the completion stage of anuttarayogatantra.

Although some accounts relate that Naropa was the personal teacher of Marpa Lotsawa, other accounts suggest that Marpa held Naropa’s lineage through intermediary disciples only.

Dampa Sangye or Padampa Sangye was an eleventh-century Indian yogi and spiritual master who traveled widely throughout his life and brought Indian Buddhist teachings to China and Tibet. Best known as Machig Labdrön’s teacher, he is counted as a lineage guru by all schools of Tibetan Buddhism.

Padmasambhava, also known as Guru Rinpoche, was an 8th-century Buddhist master from the Indian subcontinent.

Although there was a historical Padmasambhava, little is known of him apart from helping the construction of the first Buddhist monastery in Tibet at Samye, at the behest of Trisong Detsen, and shortly thereafter leaving Tibet due to court intrigues.

A number of legends have grown around Padmasambhava’s life and deeds, and he is widely venerated as a “second Buddha” by adherents of Tibetan Buddhism in Tibet, Nepal, Bhutan, the Himalayan states of India, and elsewhere.

In Tibetan Buddhism, he is a character of a genre of literature called terma, an emanation of Amitabha that is said to appear to tertons in visionary encounters and a focus of guru yoga practice, particularly in the Rime schools. The Nyingma school considers Padmasambhava to be a founder of their tradition.

Siddhārtha Gautama or Siddhattha Gotama in Pali, also called the Gautama Buddha, the Shakyamuni Buddha, or simply the Buddha, after the title of Buddha, was a monk mendicant, sage, philosopher, teacher and religious leader on whose teachings Buddhism was founded.

He is believed to have lived and taught mostly in the northeastern part of ancient India sometime between the 6th and 4th centuries BCE.

Saraha, Indian Mahasiddha and lineage master in the Mahamudra transmission. Also known as “The Great Brahmin”.

Historically he is certainly one of the most elusive figures in the transmission of the Mahamudra lineage. No definite dates are known for him.

Saraha is counted among the Eighty-four Mahasiddhas of India and a brief biography of him can be found in the work of Abhayadatta.

Karma Pakshi was the 2nd Gyalwa Karmapa. He was a child prodigy who had already acquired a broad understanding of Dharma philosophy and meditation by the age of ten.

Rangjung Dorje (1284–1339) was the third Karmapa (head of the Karma Kagyu, the largest sub-school of the Kagyu) and an important figure in the history of Tibetan Buddhism, who helped to spread Buddha-nature teachings in Tibetan Buddhism.

Tilopa (988–1069) was born in either Chativavo (Chittagong), Bengal or Jagora, Bengal in India. He was a tantric practitioner and mahasiddha.

He practiced Anuttarayoga Tantra, a set of spiritual practices intended to accelerate the process of attaining Buddhahood.

Naropa is considered his main student.

At Pashupatinath temple premise, greatest Hindu shrine of Nepal, there are two caves where Tilopa attained Siddhi and initiated his disciple Naropa.