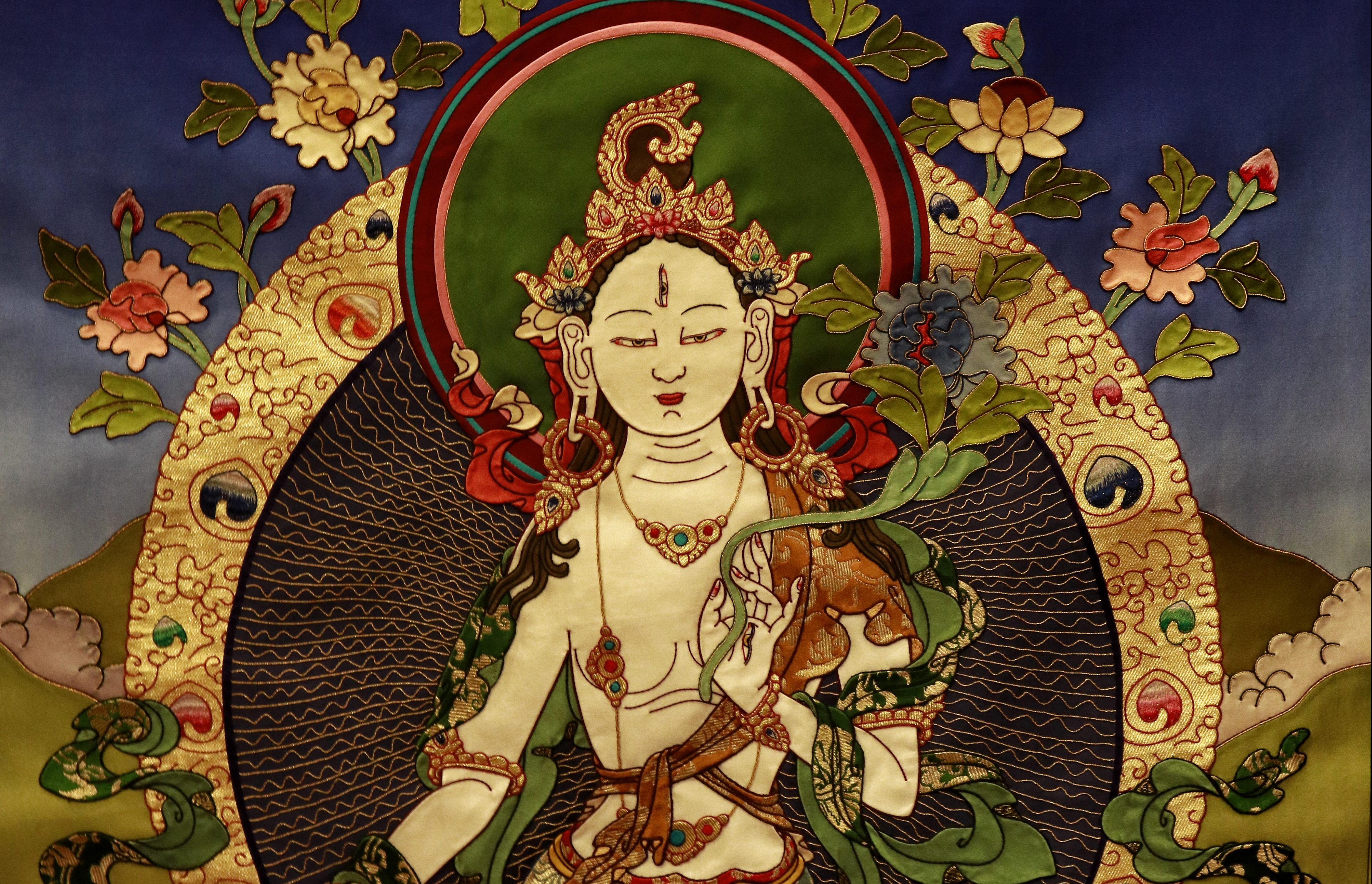 A completed thangka, however beautiful or impressive, never tells the full story of the complex process artists to undergo to create such a divine image.

We have compiled this list of Twelve steps involved in producing a traditional Thangka sacred painting to help you appreciate your new thangka.

Although certain elements of thangka painting have changed since artists began painting in exile, much of traditional styles and techniques have been painstakingly retained.

We hope the following will both interest and enlighten you as to this sacred ancient art. The thangka painter plans the initial layout of the proposed thangka, deciding upon the number, layout, and size of the deities to be painted. At this point, the individual grids are calculated and drawn.

The initial drawing of the deity and landscape

The chosen Buddhas are drawn within their grids and landscape details are added.

The initial sketch is outlined in ink allowing the removal of the calculated grids.

Painting the Buddha and its landscape

The initial coloring of the thangka takes place, laying a ground for all dry shading.

The artist now of dry and wet shades the thangka to provide a feeling of depth.

The next step is called ser ri, or the application of gold ornamentation. Fine gold lines are painted on representations of brocade robes and cushions, and on flowers, leaves, and rocks. (This stage should be distinguished from the application of flat gold areas, which is done as the last of the flat color applications.)

Finally, both the flat gold areas and the gold lines are polished with a gemstone, such as onyx. After polishing of the golds, which is called ser ur, the painting is cut off the strainer and sewn onto its silk frame or mounting. Traditionally a tailor would sew the frame.

With indigo and deep red, the thangka painter now outlines all the details in the thangka.

Opening the eyes of the Buddha or deities

This is when, traditionally, the Buddha is said to enter the image. The act of painting the eyes of the deity is the most sacred stage of thangka painting and is performed at dawn on an auspicious day.

Finally, there is a consecration (rab ne) ceremony for the finished thangka which includes a cen je, or “Opening of the Eyes,” ceremony.

Writing Mantras on the reverse of the thangka

The three letters OM, AH and HUM mark the Crown, Throat and Heart Chakras respectively. This is a religious ceremony, traditionally done by a monk or a religious teacher, which sometimes involves the writing of an inscription on the back of the thangka. Only after the performance of this, the ceremony is the living presence of the thangka considered to be embodied in the work and communicated by it.

The finished painting is sewn within a Brocade frame and finished with ribbons and silk to protect the image. The work of art is now recognizable as a Thangka!

The mountings are lined with a separate fabric, usually cotton chintz or plain weave silk. The conservator often finds these linings to be quite loose, as gravity stretches the fabric, which is still securely held to the outside edges of the mounting. Often, a tailor has sewn a mounting over an edge or corner of a painting.

When the mounting is removed for conservation treatment, it may reveal the protected original painting, with a clean surface, free from incense and butter lamp smoke damage.

This final step is what distinguishes Buddhist practice from ordinary “idol worship.”

The practitioner takes his or her newly completed thangka to a highly realized Buddhist master and makes offerings to request the master’s blessings.

The master, endowed with the clear mind of enlightenment, is able to “bring alive” the image on the thangka by infusing it with energy and beseeching the deity to open its eyes and look upon all sentient beings.

The thangka, having now been properly consecrated, is a receptacle of wisdom.

It is ready to be hung and venerated as a genuine living embodiment of enlightened mind.

It is important to note that this final step is only necessary if the thangka artist himself is not acknowledged as a realized being.

Over the centuries, many important Buddhist masters have intentionally taken rebirth as thangka painters, and if such an artist creates a thangka, the very mind of the artist naturally consecrates the image being painted.

In such cases, there is no need to seek the services of a lama for an additional consecration.

The most common forms of damage to thangka paintings are caused by their reactiveness to changes in relative humidity, water damage, improper handling, and deposits of grease and soot from butter lamps and incense smoke.

Thangkas often rested against walls of monasteries, causing a variety of recognizable damage to the supports, ground and paint layers. When the back linings became damp, and in thangkas where the back of the support was left exposed, cockling, staining, blurring of details and loss of color clarity were the result.

Specifically, changes in relative humidity cause the support to cockle and wrinkle unevenly. The support is firmly sewn into a silk mounting which reacts differently than the cotton support to environmental changes. Large cockles often appear in the center of the support and along the sides, while tight wrinkles are often found in the four corners.

Improper handling also causes great damage to these objects. The thangka form was devised to facilitate easy transportation; nevertheless, rolling and unrolling a painting over the centuries causes damage to the support, ground and paint layers.

The traditional method of rolling a thangka is the only method considered to be respectful: the thangka is rolled from the bottom upwards, rolling the cover into the scroll. This compresses the pigment particles and abrades the surface. The crunched up cover or, if there is no cover, the back of the mounting and the painting itself can severely abrade the surface. Improper rolling also damages the silk mountings, covers, and ribbons, causing them to crack along fold lines or warp out of shape.

This definition of improper handling may seem like a stern condemnation of the habits of the original owners, who were monks and lay worshippers; however, in this case, the human-caused damage is not limited to the modern museum person. Damage to the paint layers may also show the effects of the artists’ techniques, with interlayer cleavage or deep cracking, the exact nature of the damage often depending on the paint layer structure.

Traditional Tibetan worship includes the burning of butter lamps and incense in front of thangkas. These deposit thick layers of darkening soot, grime and sometimes grease, which are extremely difficult to remove. Butter-lamp and incense smoke are also often embedded in the silks causing deterioration.

As a result of the above-mentioned damaging processes, the conservator often finds the picture panels and mountings of Tibetan thangkas to be in poor condition. While it is not within the scope of this article to fully describe a conservation treatment of a specific thangka, hopefully, such an article will follow in the near future. 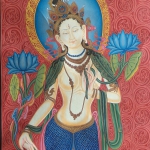